Fans flock to East Texas every June for pea-picking and pea-shelling contests, history, and community 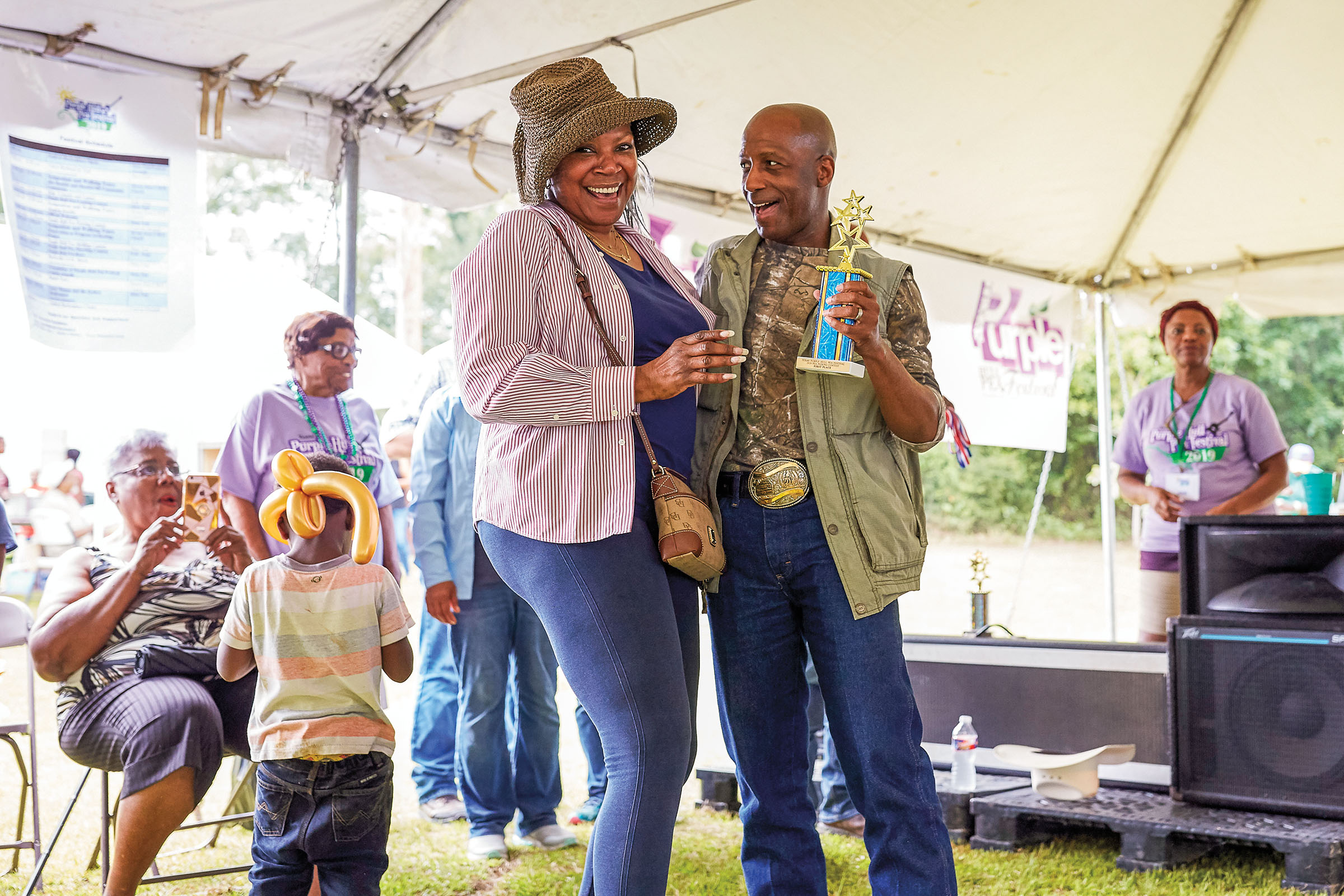 On a typical day, Peggy Galloway navigates traffic-clogged streets as a bus operator in Houston. But today she’s making her way through an East Texas field, snapping purple hull peas from leafy vines. “Pick and pull,” she tells herself as the bag gets fatter and fatter. “Pick and pull.”

Displaying a technique she learned decades ago on an uncle’s farm, Galloway picked enough peas to win the pea-picking contest at the 2019 Texas Purple Hull Pea Festival, held annually in June in the small community of Shankleville.

Named for the color of their elongated pods, purple hull peas are unknown to many Texans. But throughout much of East and Southeast Texas, the peas are not only a treasured presence at the dinner table, they’re also a revered part of the regional culture.

Like others in the cow pea family—the best-known member is the black-eyed pea—purple hull peas originated in Africa and presumably were brought to the United States by enslaved people. They became a vital commodity in the days after Emancipation, when African Americans established hundreds of communities known as freedmen’s settlements in Texas and other parts of the South. Farmers plant the peas in April and harvest them in late June or early July. 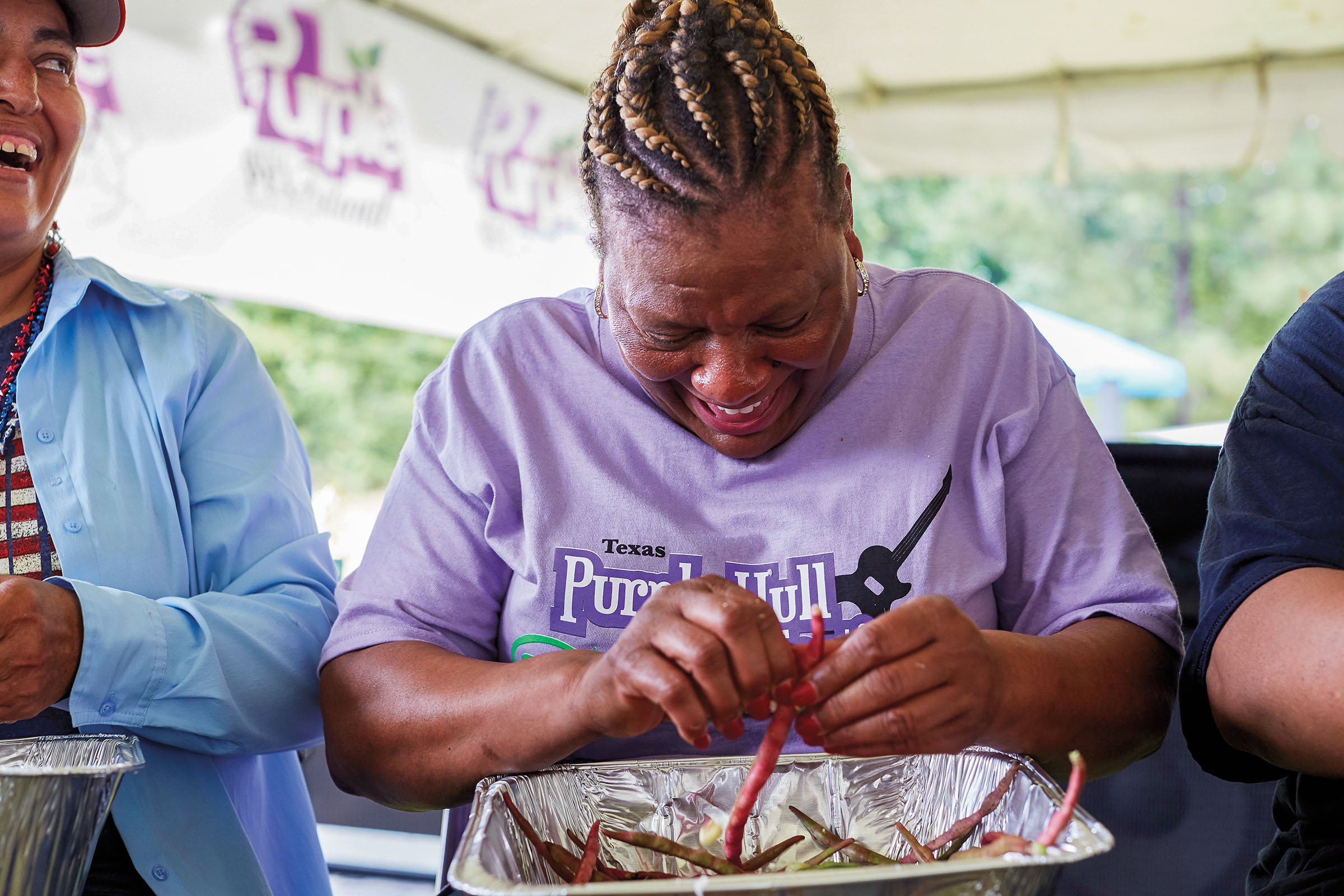 Carolyn Phillips at the pea-shelling contest.

Lareatha Clay, a Dallas-based founding board member of the Shankleville Historical Society, believes the purple hull pea deserves much more than pea-size recognition. In 2014, she started the Texas Purple Hull Pea Festival in Shankleville, which was founded by Jim and Winnie Shankle as one of the original freedom colonies. The couple met each other when they were enslaved in Mississippi, and founded the community in 1867 after they were reunited in Texas. They went on to acquire more than 4,000 acres of land.

The unincorporated community is located about 80 miles northeast of Beaumont, where Clay grew up. She has ancestral ties to Shankleville, and as a girl, she would travel with her family to the rural town whenever her grandmother called to declare: “The peas are ready.”

Clay’s family and many others throughout the South share a nostalgia of picking purple hull peas, shelling them for hours, and delighting in their creamy, buttery flavor—often paired with cornbread or ham hocks—at dinnertime. “We just have a lot of memories around purple hull peas,” Clay said at last year’s festival.

Purple hull peas are often linked to African American culture, but their appeal is wide.

“Everybody loves them,” said Jake Williams, a carpenter who attended last year’s festival with his wife and daughter. Attending the festival “reminds me of my childhood,” Williams explained. He helped pick purple hull peas while visiting his grandparents in Hemphill.

Clay said she started the festival to help bolster the local economy, promote the area’s historical significance, and trumpet the attributes of the flavorsome legume. “I’d like to see people come from around the state,” she said.

Attendance at the annual festival has grown steadily since its founding, drawing more than 600 to the June 2019 event, the biggest turnout ever. The 2020 festival had been scheduled for June 27, but was recently postponed until June 26, 2021 because of the COVID-19 pandemic. Clay says the yearlong delay gives organizers more time to make the event “even better.”

As she toted her prize-winning bag of peas, Galloway said she honed her skills “watching my mama’’ growing up in Wiergate, a small unincorporated community nearby. Purple hull peas have remained part of her life ever since and are an essential part of the holidays, cooked just as she remembers from her childhood with okra, ham hocks, and buttermilk cornbread.

Directions:
Keep a teakettle of near-boiling water on the stovetop. Place the smoked ham hock in a large pot and add enough water to bring water level to about a ½ inch above ham hock. Cook, covered, on medium-high heat for 1 to 2 hours, or until tender.

Once the peas are tender, add sugar, and then season with salt, pepper, and paprika to taste (start with a ½ teaspoon each). Continue to let the peas simmer on low heat for about 30 minutes, or until the water level is even with the peas. Some people discard the ham hock before serving; others enjoy eating the meaty bits along with the peas.