Written by Art Williams, Photographs by Will van Overbeek | From the November 2017 issue | Updated: December 13, 2018 | Filed Under: Eat + DrinkWineries 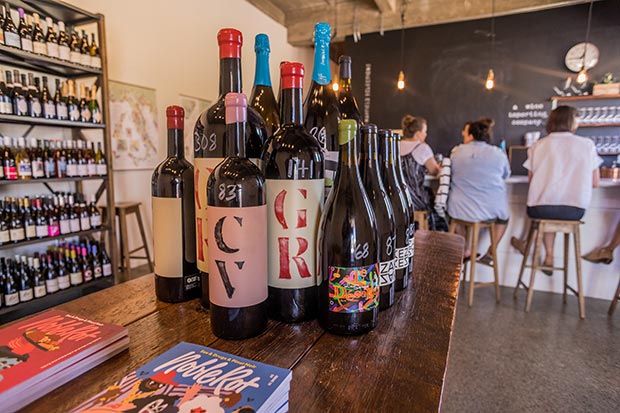 The Wine Shoppe specializes in lesser-known wines from untraditional winemaking regions across the globe.

If you venture to Waco on any given day but Sunday, you’ll find Magnolia Market buzzing with starry-eyed devotees of Chip and Joanna Gaines’ HGTV home-improvement show, Fixer Upper. Waco has seen a steady uptick of visitors since 2015, when the Gaineses transformed two defunct grain silos into home and garden shops, complete with food trucks and a bakery. But blink and you could miss one of Waco’s more understated gems just 5 minutes away, a taupe building emblazoned with two simple words: Wine Shoppe.

Inside, the 700-square-foot space reflects the town’s penchant for DIY done right. An industrial table displays magnums of wine and stacks of viticulture books. One pearl-white wall is meticulously hand-lettered with the poetic words of wine writer Hugh Johnson. A stately diamond-tufted leather couch complements the rustic mesquite slab coffee table it faces. And at the center, three tall wooden shelving units display more than 200 wine bottles handpicked by shop owner David Mayfield, who opened the place with his wife, Abigail, in 2014.

The Wine Shoppe offers more than just a carefully curated collection of wine. It is part tasting room, part retail shop, and part wholesale warehouse. It’s also become a mecca for the genre known as “natural wine”—wine made without chemicals or additives, using as little technological intervention as possible.

David’s career in wine also unfolded naturally. After graduating from Baylor, he worked for the federal government for three years before the writings of British wine expert Michael Broadbent inspired him to learn more about wine.

“It was utterly fascinating to think of the historical aspect of drinking wine that’s 100 or 200 years old, and just how intriguing it is that something could live that long in a bottle and still be consumable,” David says.

The Mayfields eventually moved to Napa Valley, where David completed a wine studies program at The Culinary Institute of America at Greystone. He felt particularly inspired by a seminar on South American producers, and he found himself captivated by the complex wines coming out of Uruguay. When the couple returned to Texas, David began working for a wine and liquor chain in Austin, but he quickly realized most of the bottles he sought weren’t readily available in the United States.

“There are thousands of grapes from all different places and different people growing them,” David says. “But the supply chain doesn’t support them because of this misguided idea that Americans just want to drink wines they are familiar with, the cabernets and chardonnays. So I got this crazy notion in my head: Why don’t I just import them?”

David and Abigail traveled to Uruguay, where they lived for two months while pinpointing their three favorite producers. Back in the United States, they obtained permits and registrations, bought a warehouse space, and imported their first wines in the fall of 2012.

“Then I was the crazy guy going around with 12 wines in my book—and they were all Uruguayan,” says David, who served as both delivery driver and salesman.

A few of his first clients included restaurants such as Contigo and Lenoir in Austin, Houston wine bar 13 Celsius, and Austin Wine Merchant locations in both Austin and Houston. Next, David and Abigail visited the Basque Country, fell into love with the region’s txakoli  (an effervescent wine) and sidra (cider) and began importing products directly from specific family winemakers in Spain.

“To me, what is fascinating about wine is the story, the adventure, the knowledge, going to a new place and trying wines on location,” he says.

After four years in Austin, the Mayfields decided to return to Waco. A realtor friend found them a warehouse space in the center of town, and it had space in the front for a reception area. In November 2014, the Wine Shoppe opened its doors to the public, introducing many customers to a whole new world of wine. David now sources his inventory from a hundred different wineries and counting, and though the shop’s selection may appear humble at first glance, there is much to discover about each bottle. Vintage manila tags provide clues for select wines.

“Bobal. This is what your life has been missing,” reads one, referring to a lesser-known Spanish grape. “A fistful of flowers,” teases another. One tag quotes drinks writer Talia Baiocchi: “I’ve realized that unbridled curiosity—not knowledge, or fancy glassware or the right vernacular—is the only thing you need to love wine.”

Curiosity is exactly what leads many people into the shop—and keeps them coming back.

Each week, the shop features three different wines for tasting, and a slate chalkboard behind the bar lists specials and wines available by the glass. Whoever is pouring will gladly regale you with stories about grower-producers while playing jazz albums on the record player.

On weekends, local food truck Milo often hosts pop-up dinners, and the space also fills up for regular aperitivo nights, when David serves wines with cheese and charcuterie from Antonelli’s Cheese Shop in Austin. The Wine Shoppe also hosts the occasional intimate paired dinner, with ticket prices averaging $75. And for $51 a month, locals can join a wine community-supported agriculture (CSA) program, which comes with three select bottles of wine plus suggested food pairings (with recipes) and tasting notes.

“The reason to keep doing this is twofold,” David says. “One, we help producers who are struggling. And second, if we allow the American market to determine what is available, and what sells, winemakers might have an incentive to pull up vines of sumoll [an uncommon Spanish grape] and plant cabernet sauvignon. And if enough people do, there will be no sumoll in the world left. And to me and others who love interesting wine—natural or not—that would be a sad thing.”