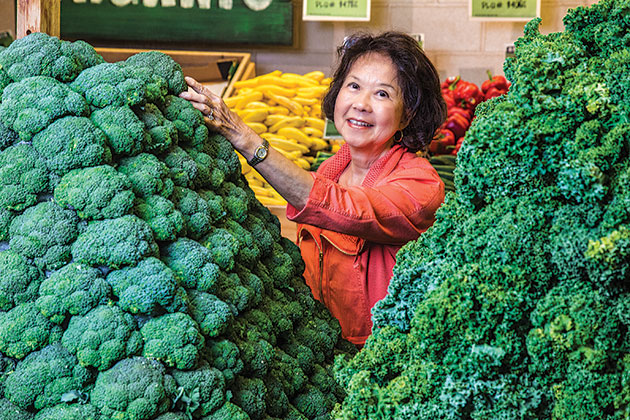 Don’t eat this,” says cookbook author, culinary tour guide, and teacher Dorothy Huang, laughing as she shows a dried red pepper to her cooking class in Austin. Several of the people gathered around the double cooktop, where at least four burners flame at once, nod knowingly as she drops several of the peppers into a hot wok.

By the end of the evening, the class will have made—and eaten—fried wontons, hot and sour soup, Mongolian beef, and shrimp with cashews.

Born in Canton (now Guangzhou), China, and raised in Taiwan, Huang came to Texas in the late 1960s when her husband took a job with Texaco. She earned a master’s degree at the University of Houston and worked as a hospital dietician before being asked to fill in for a friend teaching a Chinese cooking class. That was more than 30 years ago, and Huang has since taught all over Texas and written two cookbooks.She currently teaches at the Silver Whisk Cooking School in Austin and at Central Markets statewide. “I love food and teaching. It is my passion. Chinese cuisine is one of the oldest in the world. And my recipes are really good,” she says, smiling, which she does almost constantly.

One of her most popular classes covers China’s four regional cuisines: hot and spicy Szechuan; Cantonese, which is big on fresh ingredients and seafood; Shanghai-style, which uses a lot of soy sauce and ginger; and Beijing-style, where wheat noodles and dumplings are common. She even teaches a class called “No Cutting, No Kidding,” which emphasizes dishes that require little prepwork.

Her classes are hands-on, with students cooking as she explains ingredients and demonstrates techniques. “Working together and learning together make it easy,” she says. She may be referring to cooking class, but it’s a noble philosophy for life, too.