The “Gayborhoods” of Texas 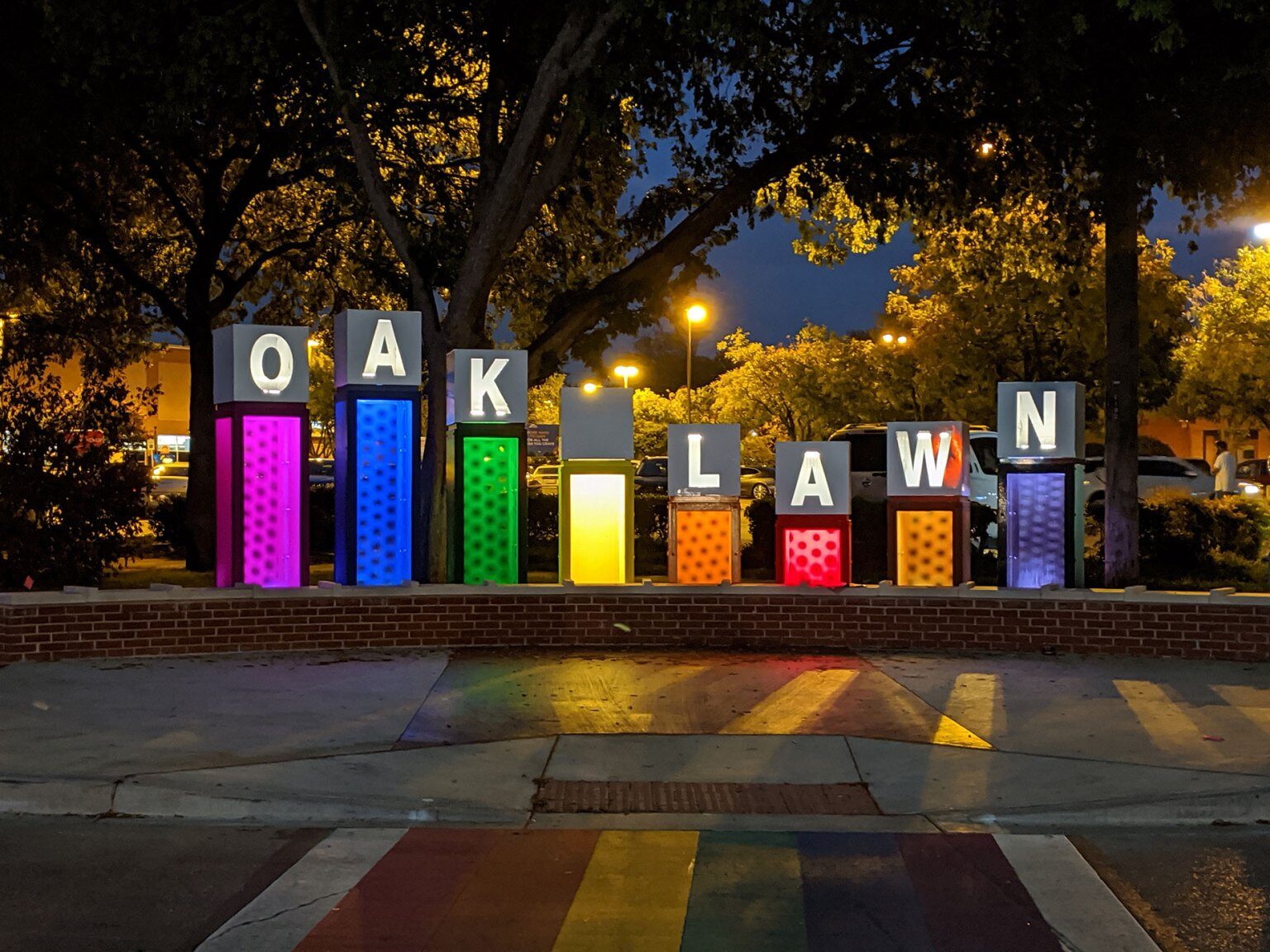 One of Oak Lawn’s two gateway signs sits at the intersection of Douglas Avenue and Cedar Springs Road, in Dallas, right in front of Kroger. Photo courtesy Dennis Jansen / DallasGayNightlife.com.

Texas’ “gayborhoods” aren’t just neighborhoods with rainbow-painted crosswalks at their intersections; they’re historic communities where Texas pride and gay pride intersect in ever-fascinating unison. For decades, all types of people from cowboys to drag queens have lived, worked, and played harmoniously in these charming meccas of queer life. Their one-of-a-kind restaurants, vivacious nightclubs, and lovable locals crown these gayborhoods as attractive destinations—no matter where you fall on the sexuality spectrum.

DALLAS
In 1947, one of the first gay bars in Texas, Club Reno, opened in Dallas, heralding the city’s LGBTQ community as one of the earliest to form in the state. That emergence intensified in 1972, when three days after the Stonewall Riots, 300 activists took to the streets in the name of equality. As that group grew to over 3,000 while marching through downtown, Dallas became the site of the first gay pride parade in all of Texas.

The Oak Lawn neighborhood, located along Cedar Springs Road, has held the heart of the LGBTQ community in Dallas for over 30 years and is the primary assembly point for LGBTQ political and social events, including the annual Alan Ross Freedom Parade. In 2018, Dallas became the first city in Texas with an official Texas Historical Commission subject marker acknowledging its longstanding queer community. The marker sits at “The Gay Crossroads,” located at the intersection of Throckmorton Street and Cedar Springs.

The sign’s backdrop is JR’s Bar & Grill, an iconic gay club that has served American eats since 1980 with regular drag queen and celebrity appearances. Its upstairs patio is one of the best spots to people-watch. Next door is Station 4, known to locals as S4, a 24,000-square-foot nightclub and gay utopia since 1986. Upstairs, The Rose Room’s stage belongs to some of Dallas’ most popular drag queens every Friday, Saturday, and Sunday night. Asia O’Hara, a former contestant on RuPaul’s Drag Race and host of RuPaul’s Drag Race Live at JR’s Bar & Grill, won an amateur contest at The Rose Room before working her way onto its permanent cast. Also at “The Gay Crossroads” intersection is Sue Ellen’s, considered to be the oldest lesbian bar in the state. 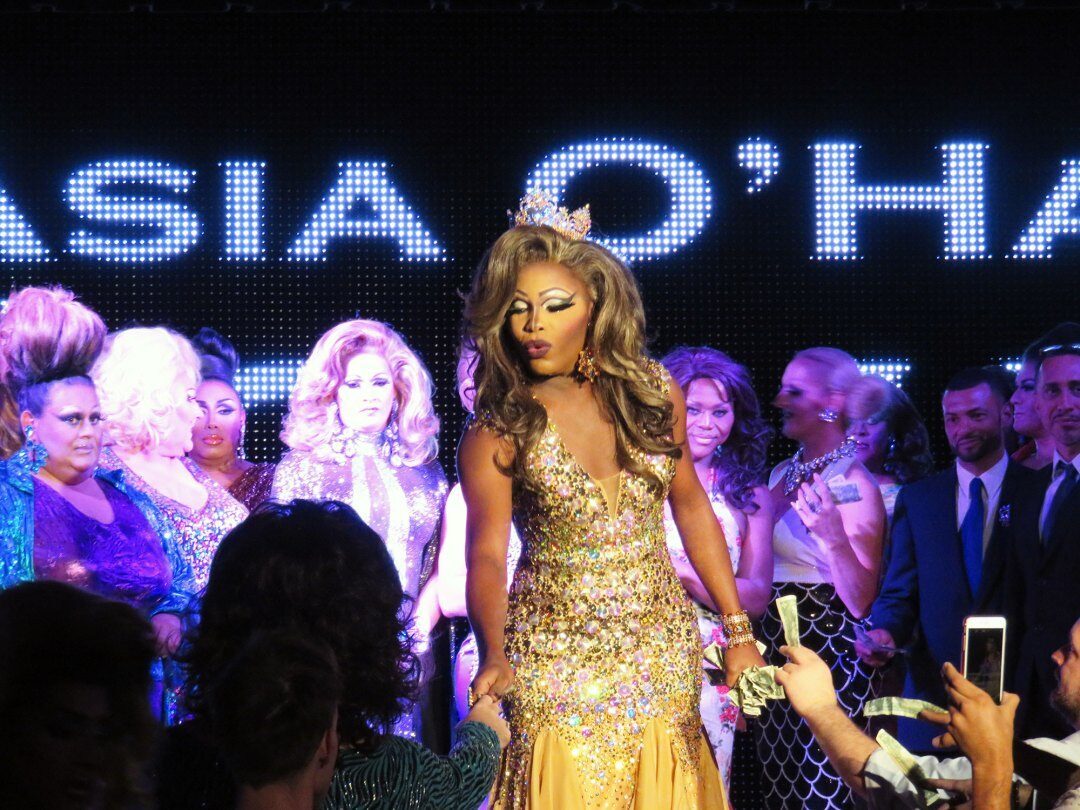 HOUSTON
The Montrose neighborhood in Houston was founded in 1911 and had an estimated 30 to 40 gay bars by the late ’70s. In June of 1977, LGBTQ advocate Ray Hill organized a rally in protest of singer and anti-gay activist Anita Bryant visiting the city. More than 1,000 people showed up, which began the gay liberation movement in Montrose and led Hill to help establish The Montrose Center, an organization still operating today that focuses not only on advocacy but also on offering resources to the community. By the ’80s, amid the HIV and AIDS epidemic, Montrose was known for being the hub of queer life in Houston.

Less than five miles west downtown, Montrose features gayborhood staples like permanently installed rainbow crosswalks and historic saloons. RIPCORD opened in 1980 and has the distinction of being the oldest gay leather bar in Texas. Bar Boheme, a restaurant known for its frozen mojitos, creative pizzas, and Vietnamese fries, is well-known for its Sunday drag-show brunches on the massive wraparound patio. (Yes, that means avocado toast and mimosas served with a side of drag queens shaking their rumps.) Another festive Sunday scene is Hamburger Mary’s Sunday Broadway Brunch. This restaurant, which began in California, offers family-friendly dining during the day and switches to an entertainment venue at night, with events such as “Dining with the Divas.” 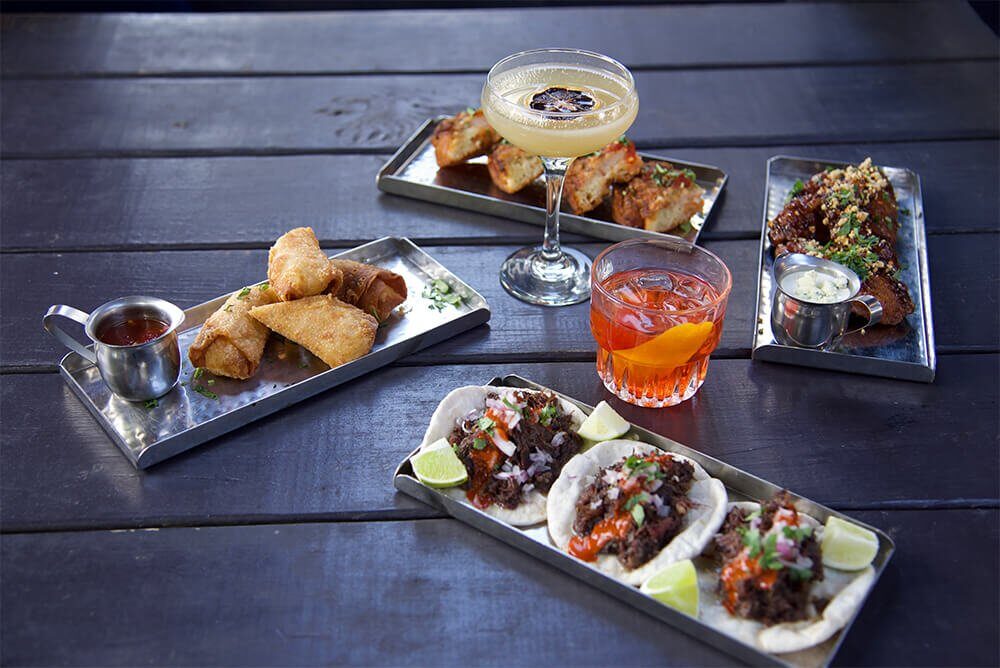 SAN ANTONIO
San Antonio’s Main Avenue is interchangeably referred to as “The Strip” and “The Gay Strip,” but it’s gay no matter what you call it. Located just north of downtown, in Tobin Hill, this central gayborhood district doesn’t fall short on rainbow flair. Its main event is the “Pride Bigger Than Texas” Pride Parade and Festival, which will be held virtually on June 26 this year. Also on June 26 is The Strip’s Pride Block Party, an in-person event to commemorate Pride Month in the gayborhood. Its motto: “After Darkness Comes the Rainbow.”

Luther’s Cafe, famous for its juicy burgers and even more delicious drag shows, has served the San Antonio LGBTQ community on North Main Avenue since 1949. In 2016, Luther’s hosted a spontaneous meeting with San Antonio Police Chief William McManus to discuss the response of local law enforcement after the tragic mass shooting at a gay nightclub in Orlando, Florida. This show of the restaurant’s devotion to its community keeps its customers bursting with pride. A short stride over a nearby rainbow crosswalk will land you at the pinnacle of gay nightlife in San Antonio, North Main Avenue’s bar strip. This includes Knockout Sports Bar, Pup’s Pizza, Sparky’s Pub, Ouch Apparel, and Heat Nightclub, each a safe bet for up-all-night entertainment. Also, Pegasus, a club founded in 1994, is open every day of the year and offers five different themed bars: a main bar, a patio bar, a karaoke bar, a sports bar, and a country bar. Drag shows are every Thursday, Friday, and Saturday night.