We Love Our Mudbugs 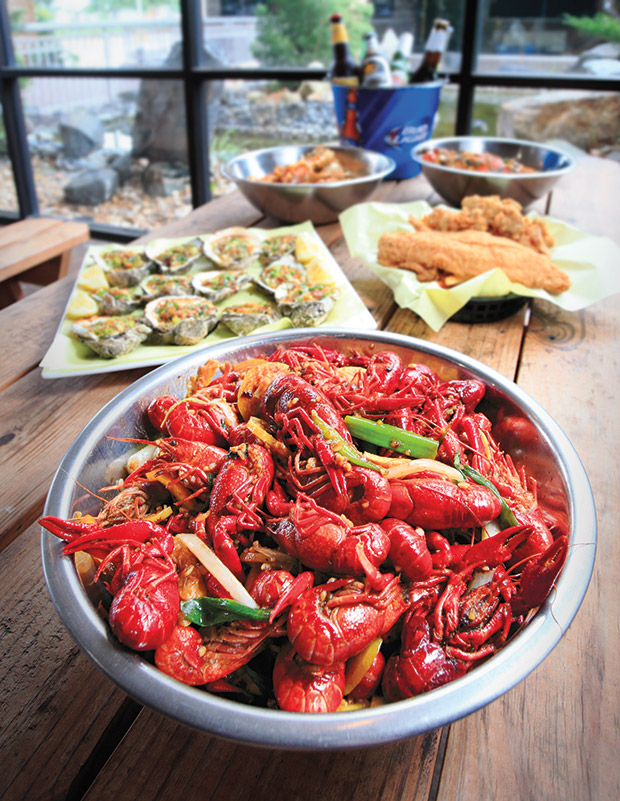 The crawfish at Larry’s French Market in Groves looked like a pile of bright red miniature lobsters heaped on a beer tray. I got mine with boiled potatoes, corn-on-the-cob, and a crab.

Larry’s French Market is where the Texas crawfish business got its start; owner Larry Judice is the third generation of the Judice family to sell crawfish in Southeast Texas. Come by on a weekend night and enjoy live music and dancing.

The tiny red shack with the corrugated metal roof is known for large crawfish. Juju, whose real name is Lacy Hanks Carter, grew up in Beaumont, and her grandmother gave her the catchy nickname. She got her seafood-boil seasoning recipe from her father, who boiled crawfish for large crowds when Juju was a kid. Call 409/794-2020.

Driving west on Richmond Avenue in Houston, look for the giant red crawfish hanging over the door of the original location. The menu includes all kinds of Cajun food including gumbo, étouffée, and barbecued crabs and crawfish (in season). Multiple Houston locations.

Calling the atmosphere of a Texas crab shack like this one “casual” is an understatement. Your server dumps your dinner out of a pot onto your paper-covered table. You sort through the crawfish, crabs, shrimp, sausage, plus the corn-on-the-cob and red potatoes and eat them as soon as they are cool enough to handle. Call 361/729-6972.

Port Lavaca is located on an arm of Matagorda Bay, a sparsely populated fisherman’s paradise 120 miles southwest of Houston. Every fishing center needs a great seafood restaurant, and Art’s Fish House fills the bill. Cajun boils with crawfish, crab, and shrimp are the specialty of the house. But there’s also gumbo, étouffée, and fried seafood on the menu, including shrimp, redfish, and flounder. There’s chicken-fried steak, too. Call 361/482-0417.

Repka’s is a sprawling country store with a bar and lots of worn wooden booths and tables. During crawfish season, the action centers on the back patio, where most nights cooks prepare thousands of pounds of mudbugs in giant boiling pots. Legend has it that the Repkas started out giving free crawfish to customers; now the grocery store is all but empty and the crawfish have taken over. Call 281/934-4499.

Order at the counter and sit at picnic tables covered with plastic tablecloths, and don’t miss the self-serve condiment station where you can make your own dipping sauces. The spice levels are mild, medium, or spicy, and the flavorings including garlic butter, Cajun, and chile lime.

These may be the most intensely spiced crawfish in Texas. Get your crawfish (and crab, shrimp, and sausage) in the amazing “Kitchen Special” boil. The cooking liquid contains lemongrass, onion, green onion, lemon and lime slices, tamarind, and sugar. A coating of butter, garlic, and spices is added to the boiled crawfish in a hot wok.

Crawfish & Beignets is the most popular place to buy boiled crawfish in the Hong Kong City Mall Food Court. Family-style Vietnamese crawfish feasts take place here on weekends, especially in the spring. Mountains of crawfish are piled on long tables in the huge food court and a dozen people pull up chairs for a crawfish-eating marathon complete with lots of beverages and conversation. At 11201 Bellaire Blvd.

Others in the story include:

The boiled crabs are monsters here—the biggest I’ve seen in a Texas restaurant in years; mine measured more than seven inches across.

It’s a messy business, eating crawfish. You twist the head away from the body and then squeeze the succulent tail meat out—or finish extracting it with your front teeth. True aficionados also suck the orange fat and spicy liquid from the head. A plastic lobster bib is never a bad idea, but I made do with a roll of paper towels to mop the orange liquid from my bearded chin. Each morsel is delicious, but it takes quite a while to make a meal out of “mudbugs,” as they are known affectionately among Cajuns.

As I worked on my crawfish from the vantage point of my
picnic table, I took in the scene. There was a long buffet line stocked with steaming mounds of savory Cajun food, including hush puppies, dirty rice, links of boudin and sausage, and fried seafood of many kinds. On the wall were floor-to-ceiling murals of bayou scenes, wildlife, and a rendition of a fishing camp with a boat moored outside. Up front, by the cash register, customers could buy Cajun cookbooks and spices. Way back in the distance,
I could make out a bandstand.

Is Larry’s French Market & Cajun Restaurant the best place to eat crawfish in the state? You could ask owner Larry Judice, but you’d better have a couple of hours to kill. That’s his fishing boat in the mural—and his fishing camp in Louisiana. Larry can wax
eloquent about crawfish, crabs, zydeco, and the best place to catch fish in the Gulf of Mexico—all in a lilting Southeast Texas-influenced Cajun accent. The gift of gab runs in the family.

Larry told me that it was his father, A.J. Judice Jr. (better known as “the Crazy Frenchman”) who first sold crawfish in Texas in the 1960s. He stocked them at Judice’s French Market, the Port Arthur predecessor to the current business, which was also run by Larry’s grandmother, Lariza Judice (known variously as “Mawmaw,” “Larry,” and “Mawmaw Larry”). When you visit Larry’s French Market today, you can see a caricature of the Crazy Frenchman in his signature red butcher’s apron and black beret.

To draw attention to his live crawfish business, A.J. brought the dubious sport of crawfish racing to Texas from Breaux Bridge, Louisiana. Legend has it that A.J.’s champion racing crawfish “Taunte La La” won him some major purses.
In the 1960s, Texas Governor Preston Smith appointed A.J. Texas Crawfish Racing Commissioner to “ensure that no unscrupulous characters got into the crawfish racing industry in the great state of Texas.”

Texans eat an enormous amount of crawfish today, but that hasn’t always been the case. “We tried serving boiled crawfish when we opened our first restaurant in 1976, but nobody would eat them—we ended up using them as a garnish or throwing them away,” remembers Jim Gossen, whose Louisiana Foods company is one of the state’s largest crawfish suppliers.

Crawfish come from fresh water, not salt water. Their culinary fame began in an enormous swamp in Western Louisiana called the Atchafalaya Basin, where crawfish were easily collected after spring floods. Wild crawfish from the Atchafalaya Basin are still considered the best on the market, but crawfish are also farmed in rice fields in low-lying areas of Louisiana and Texas.

There is a crawfish farm near El Campo that provides mudbugs to a sister restaurant called Pinchers. With its cheerfully painted walls, mounted fish décor, and airy porches lined with potted plants, Pinchers is a step up from your average crawfish shack. Live crawfish are available here from January to August, which is generally considered the crawfish season in Texas. (Restaurants that sell crawfish year round are serving frozen crawfish, which tend to get mushy when defrosted.)

The Judice family and the success of Larry’s French Market inspired other Cajun restaurants around the state. Ragin’ Cajun South Louisiana Kitchen, a Houston chain with four locations, opened in the 1970s. Its original location on Richmond boasts a giant metal crawfish sculpture on the sign that towers over the entrance. The interior is decorated in LSU memorabilia—except during Mardi Gras, when it gets so covered in beads and bangles it looks like a runaway float from the Rex Krewe’s parade. At the Crazy Cajun in Port Aransas, servers dump your crawfish, boiled shrimp, and snow crab legs on tables covered with paper. Both restaurants are favorite destinations for crawfish lovers.

The demand for crawfish exploded around 15 years ago, Jim Gossen told me. “People in this part of Texas used to sit around for hours eating boiled or barbecued crabs and drinking beer.” But Texas blue crabs got scarce when seafood brokers started buying up the big ones to sell to Maryland crab houses. “My theory is that the crawfish replaced the crabs,” Gossen said.

That explains the popularity of crawfish in restaurants known for seafood. When crabs got expensive, seaside crab shacks like the Boiling Pot in the fishing village of Fulton, just outside of Rockport, added crawfish to the mix. To get to the Boiling Pot, you walk right by the docks where the local shrimp and oyster fleets tie up. The exterior is done in graffiti-covered metal sheets and the interior
décor boasts graffiti-covered surf boards and neon beer signs.

The waiter covers your table with paper, and if you’re smart, you cover your shirt with a bib before she dumps a huge mess of boiled goodness in front of you. You’ll find crabs, shrimp, sausage slices, corn-on-the-cob, and
potatoes in the mix—and lots of crawfish, too—though crawfish don’t come from the fishing boats tied up outside the restaurant.

Gulf Coast Vietnamese-Americans are wild about Cajun-style boiled crawfish, too—and the spicier, the better. The Vietnamese came to the Gulf Coast after the fall of Saigon in the 1970s, and they started shrimping and processing seafood, industries they had pursued back home. There are a lot of similarities between Vietnamese and Cajun cuisine—both are based on rice and seafood, tend to be highly seasoned, and come from French colonial origins. In time, Cajuns started eating Vietnamese po’boy sandwiches, and the Vietnamese adopted Cajun traditions like spicy boiled crawfish. 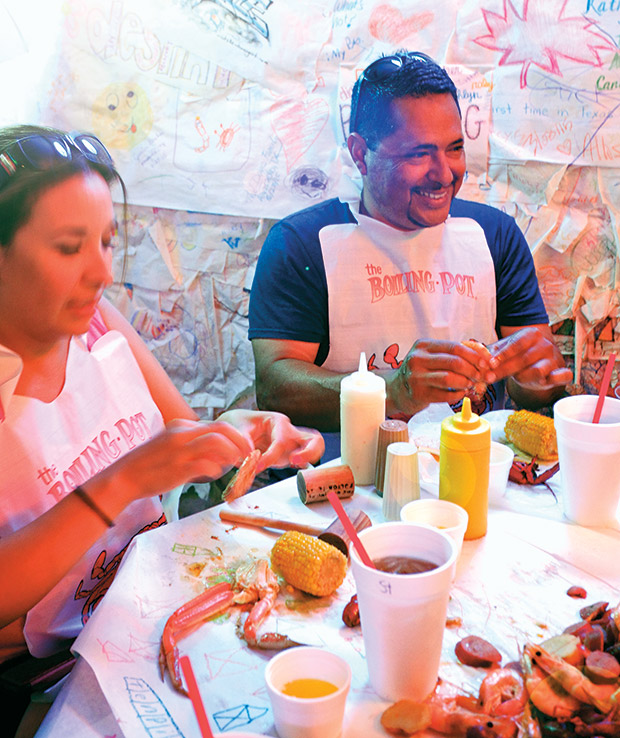 In 2002, I visited a Cajun crawfish joint on the west side of Houston, and the owner told me that when she moved to Houston from Louisiana, she noticed that there was no place to eat boiled crawfish in the huge Vietnamese neighborhood around Bellaire Boulevard and Beltway 8. And since the area was already crowded with excellent Asian restaurants, she opened a Cajun restaurant specializing in crawfish instead. Thus began the tradition of Vietnamese-owned crawfish restaurants with Cajun names.

Then came the shaker bags. Savvy crawfish eaters started donning lobster bibs and plastic gloves to protect themselves when chef Tony Bu at Hank’s Cajun Crawfish on Bellaire started putting the crawfish in clear plastic bags and tossing them with melted margarine, dehydrated garlic, cayenne, and other flavorings. The crawfish were served swimming in sauce.

But Cajun Kitchen on Wilcrest took Vietnamese-style crawfish to another level, adding lemongrass, ginger, and other Thai seasonings to the boiling liquid and offering more options—you can add the usual shrimp and crabs, and corn and potatoes, of course; but you can also get king crab legs, snow crab legs, clams, turkey necks, and sausage thrown into the pot. Other Cajun Kitchen menu sections include po’ boy sandwiches (including one filled with crawfish tails) and spicy chicken wings.

The Vietnamese crawfish craze has spread across South Texas in the last few years. LA Crawfish (for Louisiana, not Los Angeles) draws diners of all ilk to its central-city and suburban Houston locations; an Austin location opened at the end of last summer.

Whether you order them at a Cajun joint or one of the new Vietnamese/Cajun places, you need to go try some mudbugs this season. You can’t go wrong either way. At Larry’s French Market & Cajun Restaurant in Groves, I was surprised when the waitress asked if I wanted some butter dip on the side with my crawfish. It seems that Vietnamese-style crawfish has
become so popular that even the cradle of Texas crawfish is offering dipping sauces to keep up with the times.