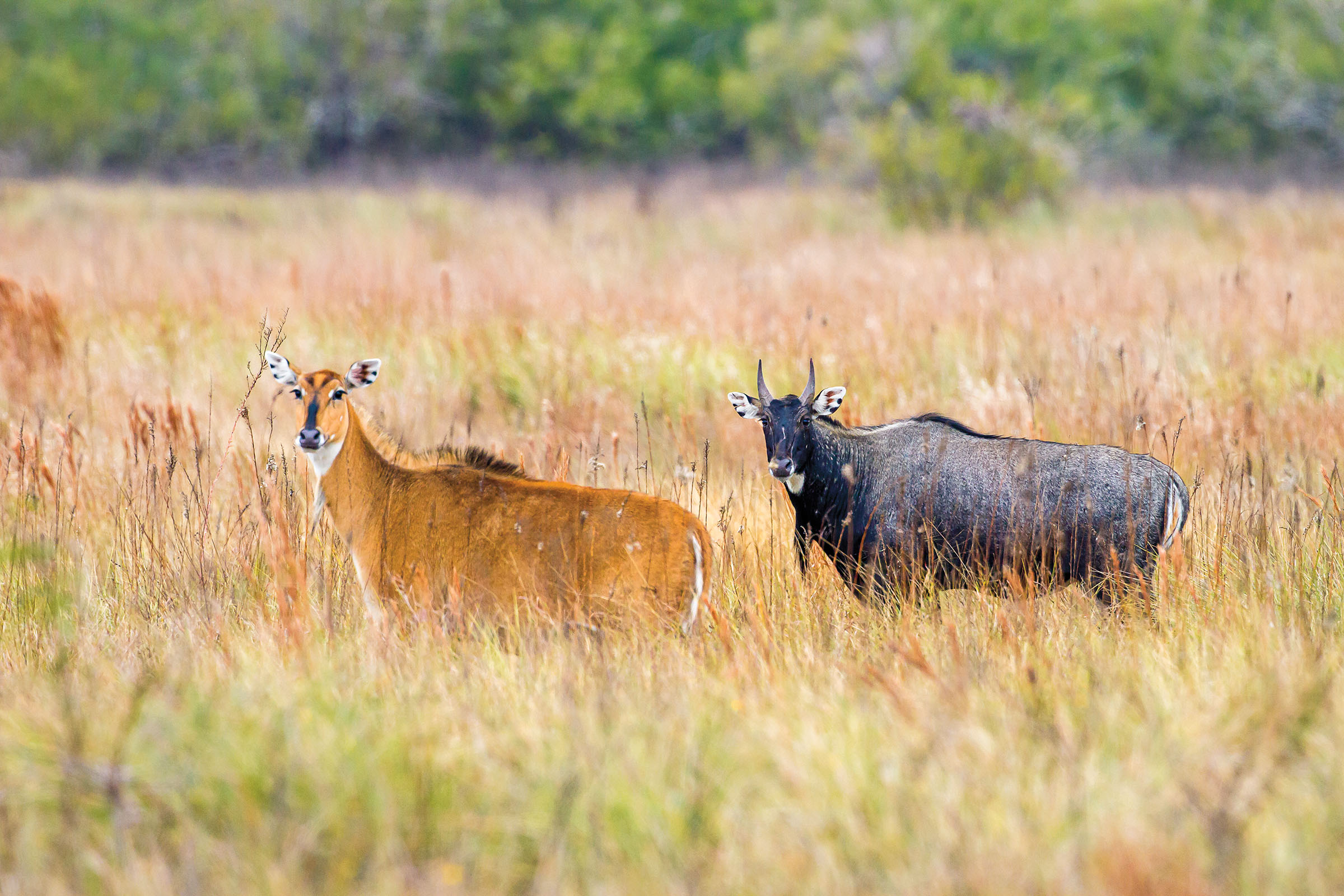 The antelope appear along State Highway 77 in the purple morning, drifting through the tall grass an hour north of Brownsville in knots of hoof and horn. Groups of tawny females and deer-size calves graze on the scrub brush. Blue-grey bulls flick their ears, standing stock-still. Then headlights sweep past on the road, and the animals’ enormous shoulders explode into motion as they flee into the savannah.
King Ranch Visitor Center
2205 SH 141 West, Kingsville.
Book tours online.
361-592-8055; king-ranch.com
The antelope are nilgai, a heavy-shouldered, long-necked species that can reach 600 pounds yet run up to 30 mph—or slightly faster than world-record sprinter Usain Bolt. They’re from India and Pakistan, so the sight of them grazing along the coastal prairies of South Texas may seem incongruous. But an estimated 30,000 nilgai can now be found in wild herds from the outskirts of Corpus Christi to nature parks in the Lower Rio Grande Valley more than 150 miles south. The vast majority of these nilgai are descended from animals introduced on the legendary King Ranch in nearby Kleberg County. 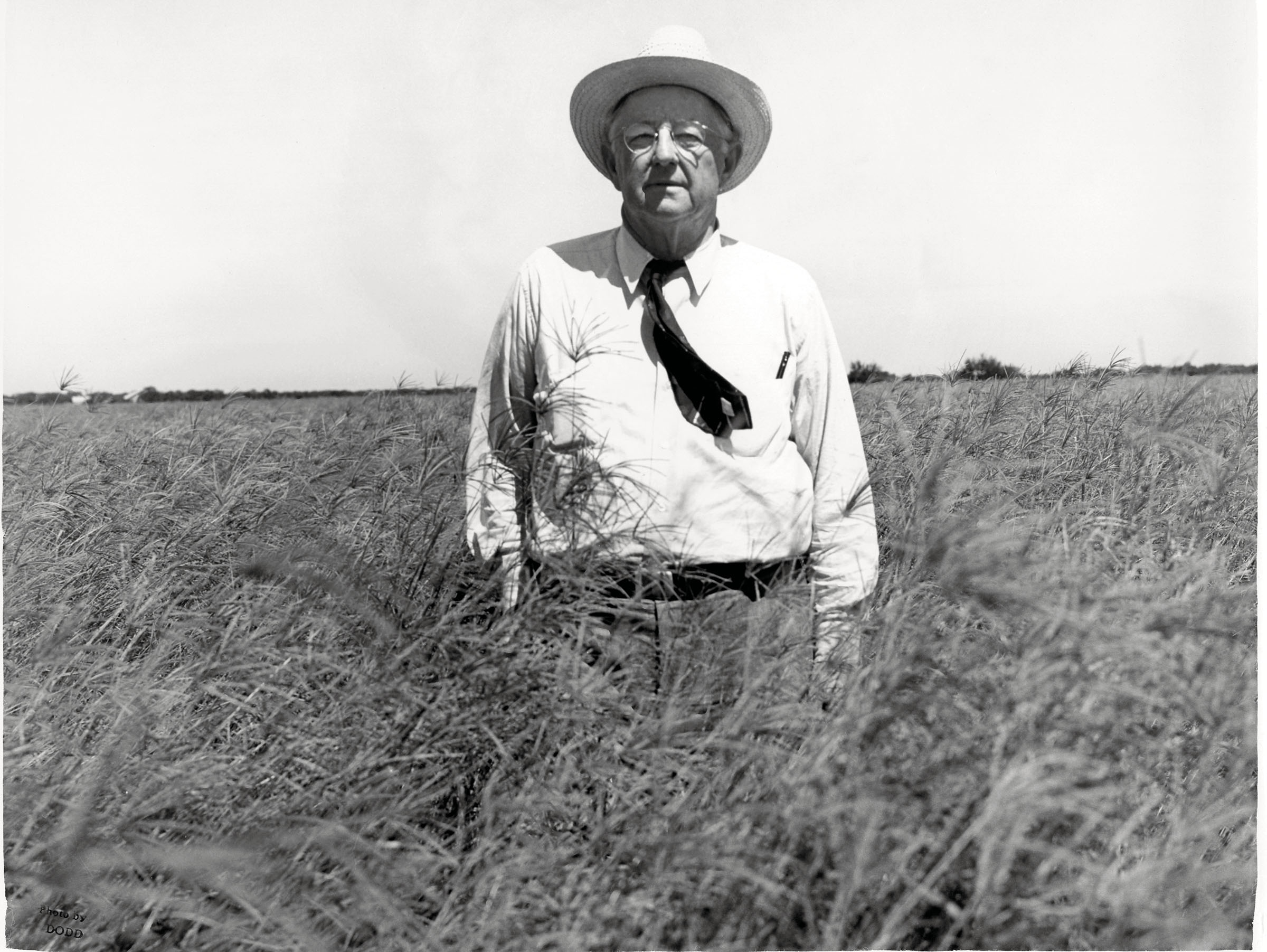 In 1924, Caesar Kleberg, the head of King Ranch, was deep into a long-term wildlife restoration project on his range. King Ranch is a vast collection of land—at 825,000 acres, it’s larger than Rhode Island. Kleberg wanted to reestablish native wildlife like deer and turkey on the ranch’s Norias division, 70 miles north of Brownsville. He collaborated with the San Diego Zoological Garden (now the San Diego Zoo) to bring nilgai out to the ranch.

According to Weston Koehler, King Ranch’s assistant area manager of wildlife operations, Kleberg’s reasons for doing so remain obscure. It might have been to supply an alternate food source for his ranch workers, to help bolster nilgai populations outside of their homeland, or to increase the variety of big game for hunting. The animals initially struggled to get a foothold on the ranch’s parcel of land, but additional releases of nilgai from the zoo in 1941 greatly helped. They provided the core of the current herd, which Koehler estimates now numbers 15,000 animals.

“Our focus is native game, but the nilgai really add a lot of value to the ranch,” Koehler says. “We really like them, but we just know that we have to manage the overall numbers.”

With few natural predators and a swift breeding rate—females usually give birth to twins annually—nilgai populations boomed. Their success owed partially to the landscape of King Ranch and surrounding properties: a patchwork of shortgrass coastal prairie, white sand dunes, and long stretches of live oak forest, all silent but for the rustle of the leaves and carpets of bright green guinea grass. For nilgai, a large scrubland antelope with a shy streak, it was paradise. But the nilgai weren’t content staying put.

“They naturally started spreading to other ranches,” Koehler says. “Some high-fence ranches have probably stocked them, but a lot of these ranches around here got their nilgai from King Ranch.” 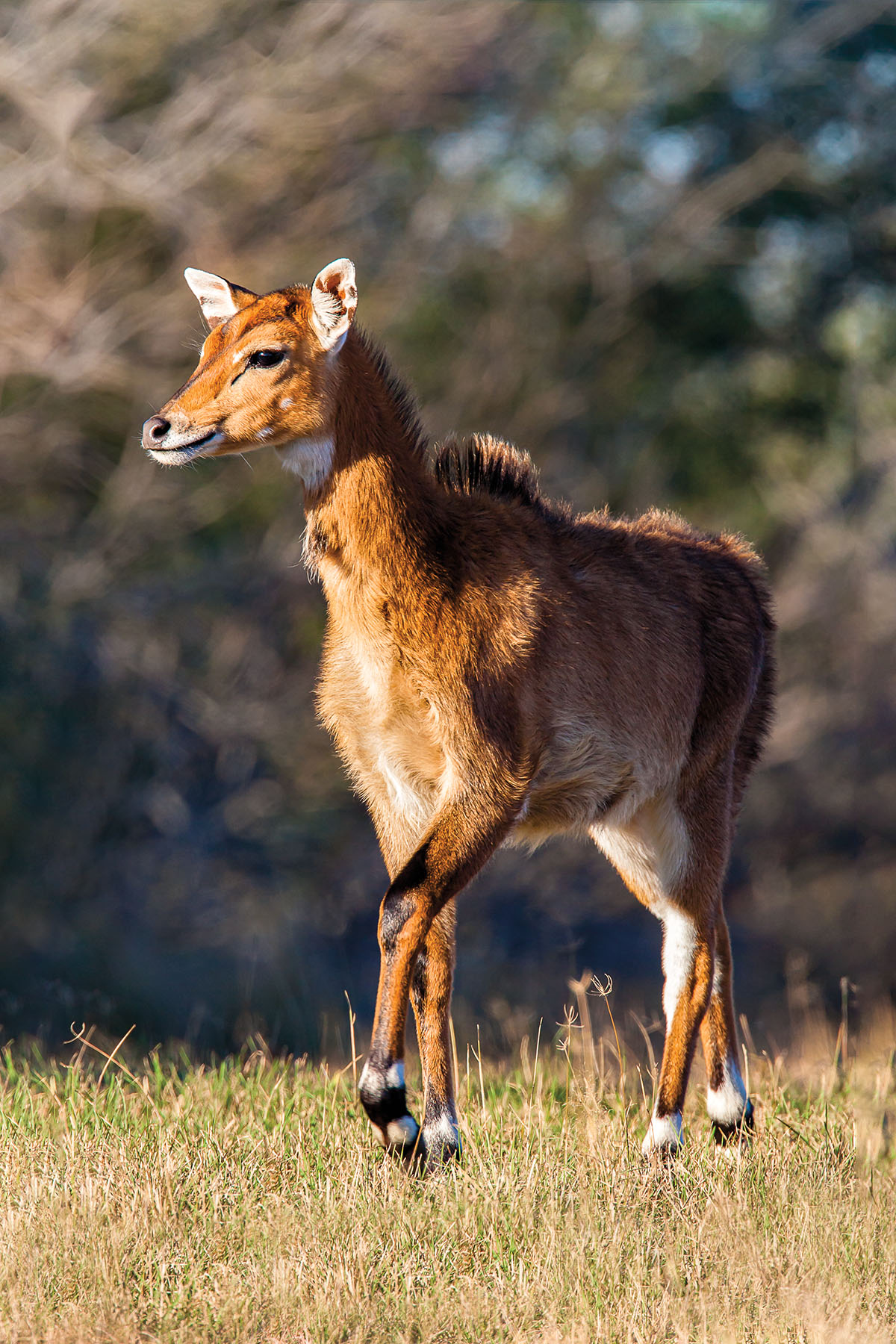 Nilgai are born to roam. In the early 2000s, says David Hewitt, executive director of the Caesar Kleberg Wildlife Research Institute, biologists fitted nilgai with radio collars. They found that a nilgai’s home range could vary from a few thousand acres to over 70,000 acres. The animals bulldoze their way under cattle fences at will, shoving the bottom wires up to create passages in the sandy loam. Radio-collared nilgai have sometimes set up right next to South Texas towns, living in drainage ditches and grazing in fields and vacant lots.

By the 1980s, nilgai had become a common sight in the region. Residents of the Gulf Coast got used to seeing them graze along the roadsides. “You’d go up to the coastline and you’d see herds of 20 to 30 here, and go up a mile or two and see 20 to 30 there,” says Joey Salazar, a longtime hunting guide on King Ranch. “They’d just be looking at you as you drove by. Nobody shot ’em.”

That didn’t last. By the late 1980s, wildlife managers began to view the elusive nilgai as a problem. The passages nilgai create by digging under fences are widely used by native species—bobcats, deer, coyotes, javelinas—and are possibly a vector for the spread of wild boars and diseases that affect other animals.

Nilgai can also act as hosts for Texas fever ticks, which transmit a disease that wipes out 90% of affected cattle. While any cattle found to carry the tick are subject to immediate quarantine, nilgai are nearly impossible to contain—and their wide-ranging habits threaten to spread the disease outside of South Texas containment zones. In response to concerns about disease, and to prevent nilgai from competing with native species, the U.S. Department of Agriculture’s Animal and Plant Health Inspection Service occasionally culls the nilgai herd in Laguna Atascosa National Wildlife Refuge, located about 120 miles south of King Ranch.

By the 1990s, hunters saw nilgai, the meat of which is known as “Texas antelope,” as an opportunity. Operations like King Ranch began offering hunting packages to trophy hunters, which can require a special five-day exotic hunting license. “We harvest roughly 1,000 nilgai a year, between commercial hunts that we sell, the owners of the ranch, employees, and the leasees,” Koehler says. “We do roughly 400 commercial hunts a year.”

After decades in South Texas, the animals have left their mark on the ranchlands. King Ranch staffers have observed that they have a particular fondness for bushes like Hercules club or tickle-tongue, and feast on the green grasses along cattle tanks and natural water sources. (The King Ranch doesn’t provide them any supplemental feed.) Nilgai often return to the same areas to defecate, and the resulting nutrient-rich piles (biologists call them “latrines”) can establish nurseries for any seeds that make it through their digestive tract.

Nilgai are also a bountiful source of food. Their carcasses provide a feast for caracara birds and other native scavengers, and their newborns are occasionally carried off by coyotes. Once, while leading a hunting party, Koehler caught a glimpse of a mountain lion—secretive predators that slip between the ranchlands of South Texas—attempting to kill a deer-size nilgai calf. Exotic species like nilgai are at their most taxing when nothing hunts them. This can cause their numbers to spiral out of control. Koehler’s fleeting glimpse suggests that even away from hunters’ guns, nilgai are subject to the same type of predation attempts as native animals.

The long-term effects nilgai will have on the South Texas environment are uncertain. There are signs that the populations may be leveling out under hunting pressures. They have also shown to be limited by the cold winters to the north and the extensive agricultural lands and urban development near the Rio Grande. But it appears nilgai are here to stay.

These creatures are made for the borderlands: between private ranchland and public wilderness, between the alien and the native. They’re shapes that bound along the grassy margins before slipping under cattle fences and vanishing into the dark.

To see nilgai, book a wildlife or birding tour at King Ranch as experienced guides provide the best opportunity to see them. To witness nilgai unassisted, visit the open plains and marshlands of Laguna Atascosa National Wildlife Refuge in the early morning. Another option is to drive along US 77 between Corpus Christi and Brownsville around dusk, where nilgai graze by the roadside. There is also the Y.O. Ranch Headquarters in the Hill Country, which has an array of exotics.