Long a fascination for many, The Guinness Book of World Records proves to be good material for a playful exhibit at the Perot Museum 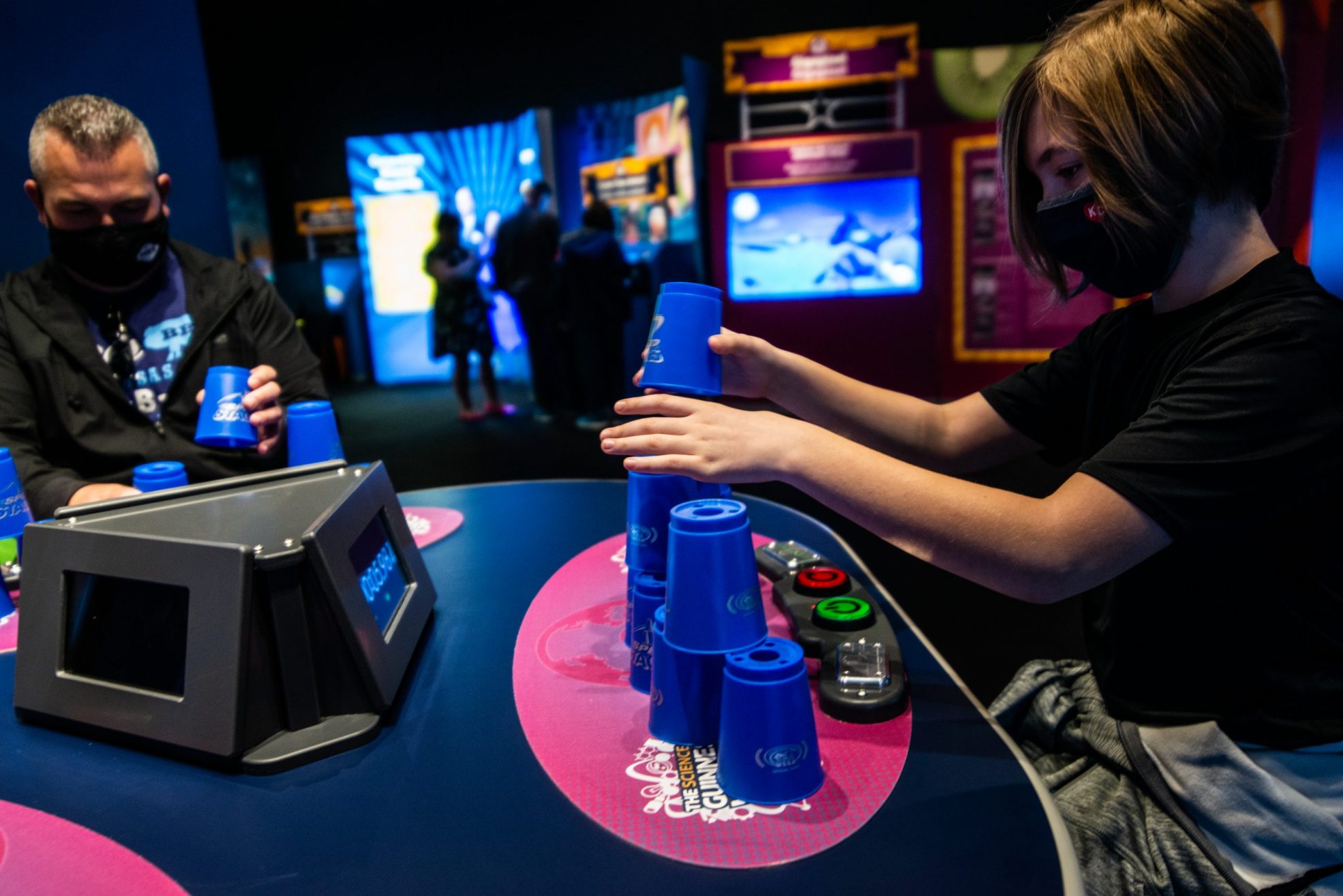 Before there was Google, there was my dad’s reference shelf in the sitting-room bookcase, where all fact-based argument was settled.

For my 9-to-12-year-old self, the most frequently consulted book on that shelf was the Guinness Book of World Records, the acetate-smelling volume that contained all the statistics important to me; stuff like world’s longest domino chain (132 feet in Austria) and the world’s biggest paella (served 100,000 people in Spain).

So on my recent visit with my 9- and 12-year-old daughters to see the Science of Guinness World Records special exhibit at Dallas’ Perot Museum of Nature and Science, it didn’t feel like going to a museum at all. The exhibit, which runs through Sept. 6, is about as far from a museum vibe as you can get.

I was pleased to see displays featuring some of the classic records, including the tallest man in the world, Robert Wadlow, of Alton, Illinois, who grew to be 8 feet, 11 inches tall, before dying at the age of 22 in 1940.

“Robert Wadlow is maybe the most iconic Guinness World Records figure,” said John Corcoran, one of the exhibit designers, who is a director of attraction development at Ripley’s Entertainment. “Probably nobody will ever beat his record.”

In one display, an opening in the shape of Wadlow’s silhouette is positioned next to a doorway just large enough for the world’s shortest married couple—A Brazilian couple with an aggregate height of 5’9”—and a “mousehole” for the world’s largest rodent—a South American capybara weighing 174 pounds. The design makes these extraordinary shapes and sizes palpable in a way not even my beloved Guinness annual could do.

Play is a constant throughout the exhibit. The Perot Museum has emphasized interactive fun since it opened in 2012, but the Ripley’s partnership brings the participatory element—and the wackiness—to the max.

“With where we’re at in the world right now and everything everybody’s been through over the past 12 months, it was very important to us to provide an experience for people that allows them to have fun, to see the amazement in the world around them and to do so in a way that’s as safe as possible,” said Dave Humphries, chief operations officer at the Perot Museum.

More than a dozen of the exhibits take the form of a challenge. You have the option of giving your fingerprints on entry so you can claim any record you break. For example, the first thing you see inside the door is a table where you can try your hand at the 3-6-3 cup-stacking. Malaysian tween Chan Keng Ian holds the record at 1.658 seconds. At that mark on the timer, I was still gearing myself up for the first cup.

Texas is no stranger to The Guinness Book of World Records. A query in the book’s database reveals 503 Texas records, compared with only 77 in Oklahoma. Here are but a few.

The longest horn spread on a living bull: 8.6 feet on Cowboy Tuff Chex, measured in 2020.

The heaviest ball of dog hair: 201 pounds collected by Texas Hearing & Service Dogs in Austin and measured in April 2012. “The hair of 8,126 dogs, acquired by grooming that was overseen by veterinarians, was used to create the ball,” according to the database.

Largest crowd of humans to ever be photographed in the shape of a cowboy hat: 363 people at the Texas Travel Industry Association convention in Galveston on Sept. 25, 2018.

Then there’s the sensor-laden punch bag, where you can try to keep pace with the 901 blows in one minute thrown by Norman Breese in Utah in October 2017. As with other records, the exhibit also explains the science behind the feat, discussing phenomena such as reaction time and peripheral vision.

Some of the exhibits combine the wacky and the scientific. For example, there’s the largest functioning bubble bottle and wand, a 4-foot, 6-inch creation by a Czech person named Matěj Kodeš. (Soap bubbles have an important role in the history of science. Isaac Newton tested his light-spectrum theory with bubbles in his backyard).

The Guinness exhibit also fulfills another part of the Perot mission—to draw in a diverse crowd. “It’s a changing world with changing demographics,” Humphries said. Museums have to ask themselves: “How do they appeal to people with all backgrounds, all levels of means?”

That’s particularly tricky for kids raised with Google-knowledge and videogame entertainment constantly at their fingertips.

“If you go to the Smithsonian, or the American Museum of Natural History [in New York], they’ve been around a really long time, and you see amazing things like you see on our fourth floor,” Humphries said. “But today’s children aren’t captivated by same things children were 100 years ago.”