With COVID-19 causing cancellations and relocations, a favorite holiday pastime has us feeling nostalgic for the pre-BCS days 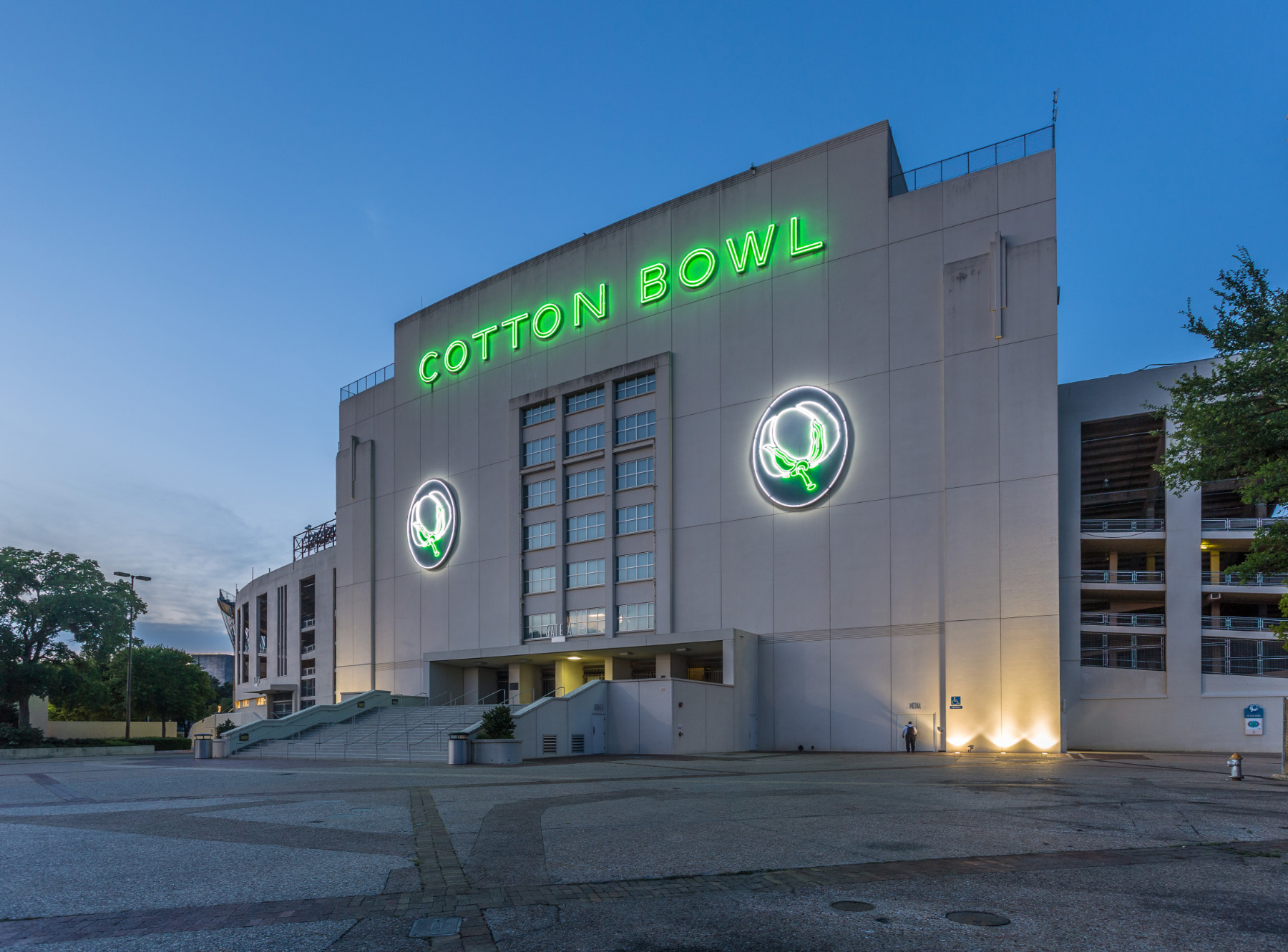 Photo by Will van Overbeek.

Decades ago, when I was a child, every Texas college football team had one goal: to compete in the Cotton Bowl on New Year’s Day. In the convoluted manner in which national titles were decided in those pre-Bowl Championship Series, pre-playoff days, the Cotton Bowl was often a deciding factor.

But that’s nothing like the confusing array we have on offer for bowl season today in Texas and for Texas teams.

Take recent trends in the sport—a hyperabundance of bowl games, star players sitting out games to avoid injury just prior to the NFL draft, the ease of transfers between schools thanks to the oddly science fiction-y named “portal”—add in a global pandemic, and this year’s bowl line-up is like none other.

The University of Texas-San Antonio Roadrunners were slated to play Southern Methodist University last Saturday night at the Frisco Bowl, but thanks to a COVID outbreak, the Mustangs backed out of the matchup. That left UTSA scrambling for a replacement game. The team is now teeing up against Louisiana in the SERVPRO First Responder Bowl, to be played Dec. 26 at Gerald J. Ford Stadium in Dallas, aka the home field of SMU, their would-be opponent.

Because of this, the people of Frisco were without a game. No matter: They quickly arranged a tilt between two U of H’s. Hawai’i and Houston will play in the New Mexico Bowl, even though—thanks again to the pandemic—the game will be decided hundreds of miles from the domain of our Hatch chile-loving neighbors. The Houston Cougars go into that game on Dec. 24 with a record of 3-4, because there are essentially no rules this year. Traditional matters like winning records being required for bowl participation went out the window. North Texas also went bowling this year despite a 4-5 record. They ended their season 4-6 after Appalachian State mauled the Mean Green 56-28 in the Myrtle Beach Bowl on Dec. 21.

And thanks one more time to COVID, Alabama and Notre Dame are playing the 107th Rose Bowl in Arlington. Whoops, make that the College Football Playoff Semifinal at the Rose Bowl Game presented by Capital One (or CFPSatRBGpbCO for short). This is not the first time the “Grandaddy Of Them All” has been played outside of its traditional home in Pasadena, California: due to fear of Japanese bombing attacks, the 1942 Rose Bowl, coming just three weeks after Pearl Harbor, was held in Durham, North Carolina.

Vance Bedford fondly remembers the simpler days of the pre-BCS Cotton Bowl. He played cornerback on Earl Campbell’s 1977 Longhorn team that lost its first and only game of the year in a cold Cotton Bowl on New Year’s Day 1978. Bedford went on to become Urban Meyer’s assistant at Florida and a defensive coordinator at Texas

As you might expect, given his perspective as a former player and coach, Bedford is less worked up about the spectacle of bowl season per se than how it all shakes out on the field. But he does make this point about bowl games: “Most of the time the teams lose money. Once you pay out the rooms and meals and the travel and your share of the payout with the conferences, they rarely make the school money. It’s more for the networks and the sponsors.”

He also sees a lack of patience among both fans and players as detrimental to the sport. Players, he believes, need to settle for back-up roles with the promise of a better payoff to come for those who wait.

“In this day and age, they all transfer,” says the 62-year-old. “If they don’t feel like they’re getting enough playing time they just transfer. Back about 15 years ago kids didn’t transfer. I think a lot of them today are not mentally tough. That’s just my opinion. When I was coming up or even 15 years ago, guys wouldn’t miss out on a chance to play one last game and hang out with their boys one last time. It’s just a different mindset today with seniors and even juniors, they might be first or second round draft picks. They are all getting out of these games now.”

Bedford is fond of pointing out the example of Tom Brady.

“Tom Brady came to Michigan in 1995 and he didn’t play for two years,” he says. “Imagine if they had the transfer portal back then like they have today. I don’t think Tom Brady would be where he is today.”

Bedford still bleeds orange, and his thoughts are on his alma mater’s matchup with Colorado in the Alamo Bowl on Dec. 29. How will coach Tom Herman handle the dilemmas of coaching in this era? Quarterback Sam Ehlinger is an icon, almost certainly playing in his last game. Somebody else will be leading the Longhorn attack next year, and that person needs game experience. Unfortunately, he’ll be playing with a drastically depleted roster: Ehlinger is the only one of seven team captains who will be suiting up, thanks to opt-outs, injuries, and a handful of players sidelined by COVID.

Bedford still thinks the Horns will roll: “Colorado has an athletic quarterback and a good rushing attack but if you stop that…I think Texas will win by two touchdowns.”

Including last year’s win over Utah, Texas is 3-1 in Alamo Bowls over the years. For the school and the game, it’s been a mutually beneficial relationship, as that bowl seems built to last, moored on a solid foundation of the way things used to be.

Back in my youth, if your team didn’t make it into the Cotton Bowl, you were often relegated to either the Sun Bowl in El Paso or the Bluebonnet Bowl in Houston, at times held in the Astrodome or Rice Stadium. You also had El Paso’s Sun Bowl and its mountain setting, one of the most naturally alluring in the sport. (COVID strikes yet again—this year’s Sun Bowl is canceled, thanks to the horrid outbreak suffered by the people of El Paso.)

In those days, bowl games were named in broad, poetical strokes, boastful of the general virtues of their host cities, rather than corporate sponsors. That all went out the window beginning in the 1980s. Subsequent bowl games in Houston—where the Bluebonnet Bowl wilted in 1987 after the oil bust—have been known generically as the Houston Bowl or Texas Bowl, often paired with a corporate sponsor, thereby yielding such bulky constructions as the Galleryfurniture.com Bowl, the EV1.net Houston Bowl, the Meineke Car Care Bowl of Texas, and this year, the Mercari Texas Bowl, named after the Japanese e-commerce app.

It was always that triad of cities: El Paso, Houston, and Dallas. San Antonio had yet to step up as a bowl hub. At the time, they didn’t have a stadium big enough to match its attractiveness as a wintertime vacation spot. And shortly after its 1993 inception, that’s city’s Alamo Bowl became something like the in-state consolation prize for Texas teams coming off good but not great seasons.

Now, it’s a yearly bowl game reminiscent of the good old days. With its continuity of conference tie-ins (since 2010, it’s been Pac 10 versus Big 12 every year) and sponsors (Valero Energy, since 2007), and San Antonio’s effortless knack at preserving traditions, the Alamo Bowl has an air of legitimacy as an institution. And San Antonians are dreaming big—maybe of one day joining the “New Year’s Six” tier of top bowls, alongside stalwarts like the Rose, Sugar, Orange, and Cotton. In my lifetime, Phoenix’s Fiesta and Atlanta’s Peach Bowls have muscled their way onto that tier and San Antonio has the potential to do the same.

And yes, even with all this opting out, portals o’ plenty, and COVID craziness, I’ll still be watching the games. I am a Texan after all.