At Wimberley’s 7A Ranch, the Past Comes to Life Aboard a New Train

By this summer, visitors can hop aboard the Pioneer Express for a ride through the recently restored resort 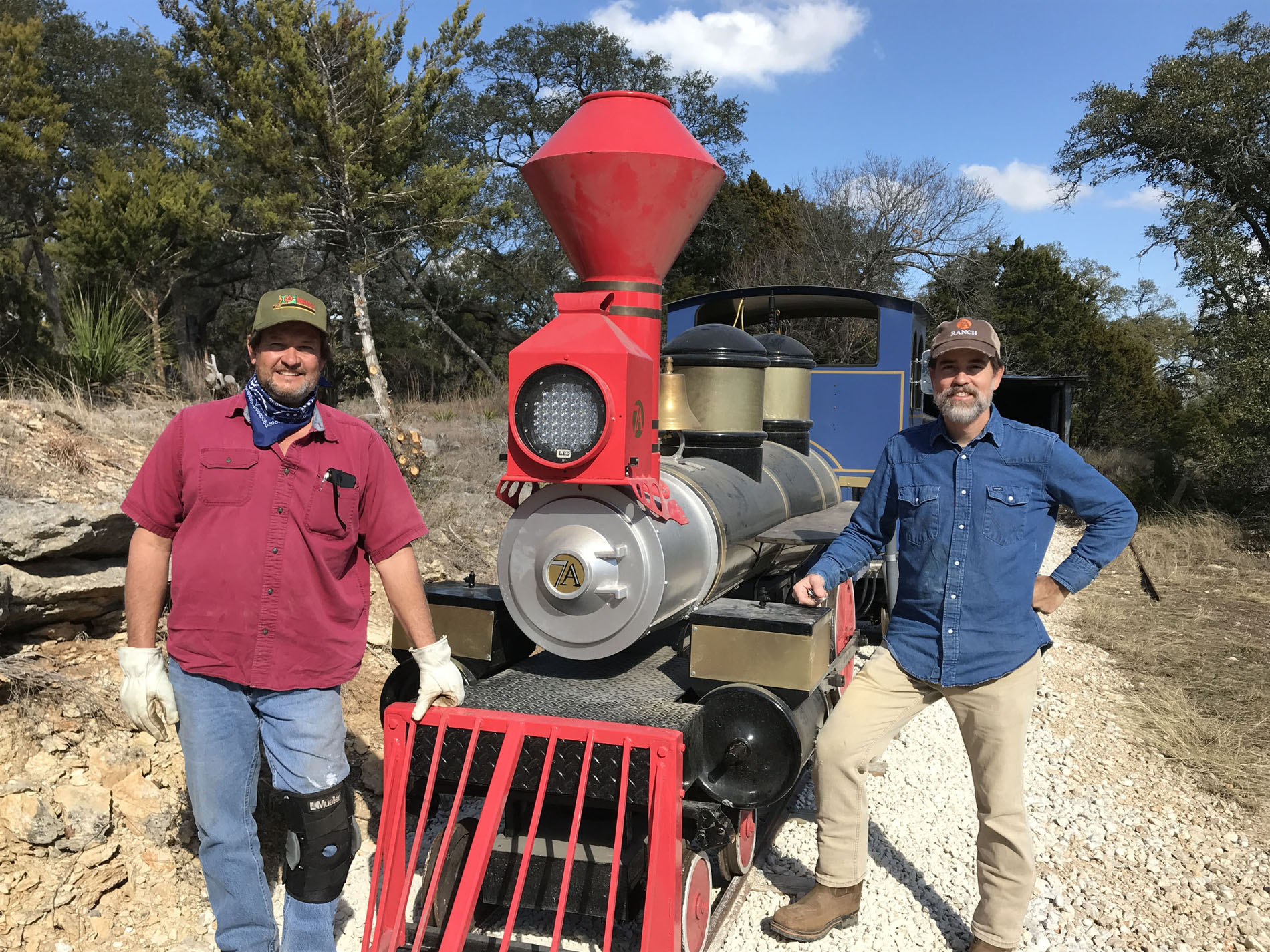 JC Herrera, left, and Scott Way stand next to the train they built together. Photo by Joe Nick Patoski.

When Scott Way purchased the historic 7A Ranch resort in Wimberley in February 2016, following the destructive Memorial Day flood of 2015, he had three objectives. He wanted to repair, restore, and improve lodging and other neglected infrastructure; revive the Western-themed Pioneer Town, once a popular tourist destination; and bring back the train.

“My great-grandfather built a home in Wimberley that my parents bought, and whenever we’d visit, we came to Pioneer Town,” says the 49-year-old Way. There were movies in the Opera House, medicine shows outside, and can-can and comedy shows. “And of course, they had the train. If you grew up in the Wimberley Valley in the summers, you always heard the train whistle. It’s always been part of Wimberley. I wanted to bring that back.”

Almost 50 years ago, on Aug. 23, 1971, the 7A Ranch introduced the Town and Pacific Railroad, a 24 gauge one-quarter scale locomotive with passenger cars that traveled on an almost 1-mile track around the resort. In the early 1990s, declining use prompted the previous resort owners to sell the train and the tracks. My younger son, Andy, and I were among the very last riders. That train would be reborn as the Frankie Schmitz Express Train that winds through Leonard Park in Gainesville.

The new Pioneer Express will make its journey through the preserved landscape of the resort, which sits near the Blanco River and features rocky, rugged natural Hill Country beauty, the limestone landscape dimpled with oak motts and thickets of ashe juniper.

To see his train vision realized, Way had to start from scratch. Fortunately, what’s nostalgic for him is serious business for others.

“It is a weird world, the train world, and the people who are into trains, I’ve learned,” he says. “I’m not a train buff, but I’ve learned a lot from train enthusiasts. It has been a journey.”

Way started in Cedar Park at the Cedar Rock Railroad, where he discovered the operator did all the building and construction himself. He then went to Gainesville to see the old 7A train. He hit paydirt in nearby New Braunfels when he met JC Herrera, a train builder who also operates a quarter scale train on his Shady Oaks Ranch events venue in Schertz.

For Way, Herrera was a godsend. “He really, really loves trains,” Way says. “I don’t know how to build trains, what the process is. He showed me the way.”

The two got busy, locating a locomotive and train from a defunct amusement park in Ohio, finding someone to rehab and restore it, building a boarding platform, rebuilding a trestle bridge, laying 4,600 feet of road base, putting in stone for drainage, finding steel for the rails, securing ties, bending the rail, securing ballast, and making sure measurements are precise. “These rails move, as it gets hot and cold, the metal actually flexes,” Way says. “You have to account for that. That’s the art of this.”

Way’s excitement grew throughout the process, something Herrera understands all too well. He has built trains all over, and every time he does, it’s the same reaction. “It’s the fascination of everything moving, the sounds,” he says. “You can see it in the kids’ eyes. They’re fascinated with it, and I’m still fascinated with it. I’ve loved trains since I was a little boy, and here I am doing it for a living. I get to come out here in nature and build something that’ll be here after I’m gone.”

There are still drop-arm gates to be installed along with three concrete crossings. A state inspector has to certify the train as a safe amusement ride, insurance must be purchased, and details in operations have to be figured out. But the train is coming back to Wimberley. And while it will be one of about 20 quarter-scale trains in Texas, it will be the first to be rebuilt and revived in the exact same space.

“I think we’ll be up and running early this summer,” Way says. “We’ll be a little bit ahead of the date 50 years ago when the first train here started.”