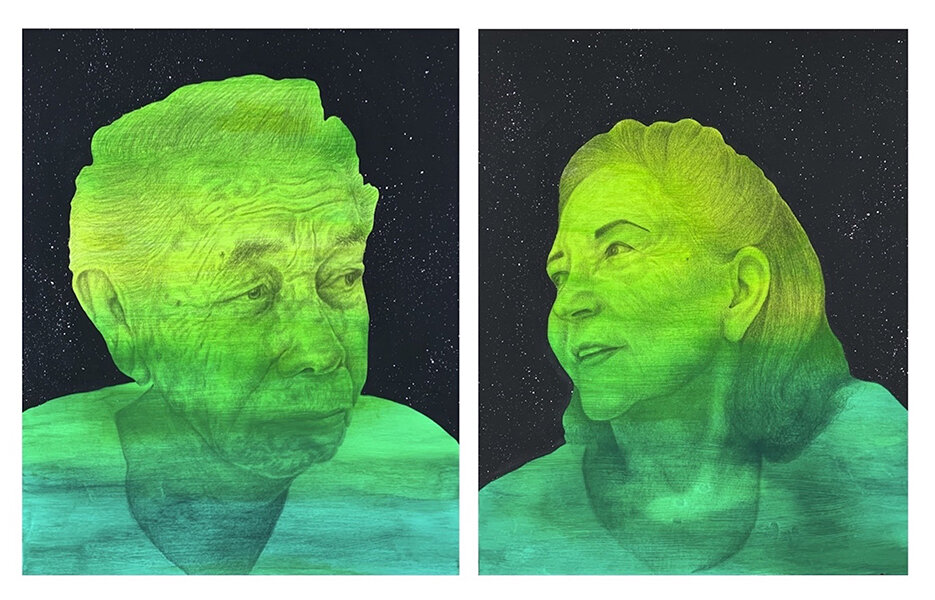 “We Arrived Here Long Ago” by Alejandro Macias. Courtesy Rockport Center for the Arts.

Whether celebrating a shared culture, exploring the diversity of a community, or honoring the past and future, National Hispanic Heritage Month offers something for everybody. Texas, with one the largest Hispanic populations in the country, has a slew of events to celebrate Hispanic heritage and culture across September and October.

President Lyndon B. Johnson signed a bill in 1968 to designate a week for honoring people of Spanish, Mexican, Caribbean, and Central and South American ancestry. The weeklong observation was expanded to a month by Ronald Reagan in 1988. Since then, Texas has seen its Hispanic population grow substantially, from around 4 million in 1980 to an estimated 11.4 million in 2018, putting it second to California as the state with the most Hispanic people in the country.

Between Sept. 15 and Oct. 15, communities across the Lone Star State are celebrating their Hispanic heritage, including events to honor Mexican Independence Day on Sept. 16. Of course, COVID-19 restrictions have put a damper on large gatherings, so many activities, such as panels, live music, and art exhibits, have been adjusted for virtual formats.

Dallas/Richardson
The Multicultural Center of the University of Texas at Dallas is hosting online dances, movies, a Latinx game night, and panel discussions for the community, including the virtual live events “Achieving the Dream” on Oct. 8 and “Mas Fuerto Contigo/Stronger With You” on Oct. 14.

Corpus Christi
If seeing art in person is more your thing, the Rockport Center for the Arts is showing an exhibit featuring works by painter Alejandro Macias and sculptor Amorette V. Garza. Sacred Americanx runs until Oct. 17. Check with the gallery before you go, as occupancy is limited.

Lubbock
On the evening of Sept. 16, Texas Tech presents its 11th annual El Grito event, which celebrates Mexican independence along with the independence of 19 Latin American countries. Speaking at the live-streaming event is Tech’s president, Lawrence Schovanec. Other events throughout the month will explore topics affecting the Latinx community in Lubbock, including immigration, representation, and health care.

El Paso
El Paso Community College kicks off its monthlong programming with a free virtual art show (themed “Be Proud of Your Past and Embrace the Future”) in partnership with the El Paso Art Association and a series of “read-ins” for people wanting to share a story, song, poetry, and other forms of literary expression.

Austin
In the Capital City, celebrations get underway on Sept. 16 with Viva Mexico, a live-streamed event from 6-9 p.m. featuring dance, music, and at-home activities for kids presented by The Emma S. Barrientos Mexican-American Cultural Center. Then, Centroamericanto Fest showcases music from Central America on Sept. 19.

College Station
Texas A&M University’s Hispanic President’s Council has organized a series of events throughout the month, including an outdoor mariachi concert on Oct. 1 and virtual conversations dealing with issues like Latinos and the law and the Afro Latinx experience.

San Antonio
Feel like dancing? The Guadalupe Cultural Arts Center has teamed up with AARP to offer classes for flamenco, folklorico, and salsa. On Oct. 4, see live performances by Tejano and Conjunto artists. Meanwhile, the University of Texas at San Antonio hosts discussions ranging from the Spanish missions along the San Antonio River to mural art in the Alamo City. Then, on Sept. 16 at 7 p.m., see the The Texicana Mamas (Tish Hinojosa, Stephanie Urbina Jones, and Patricia Vonne) discuss their debut album and the group’s formation. The band members will also take questions from viewers tuning in. The evening is presented by The Texas Heritage Music Foundation.