Story and photos by Laurence Parent

Guadalupe Mountains National Park celebrates the 50th anniversary of its dedication as a national park this fall. Back when the park first opened, my father was a park ranger at nearby Carlsbad Caverns National Park. I attended the opening ceremony on Sept. 30, 1972, as young boy, along with about 2,400 other people. I remember the event because I had broken my leg riding my bike a few weeks earlier, so I limped around the festivities on crutches.

The park had few facilities at its dedication in 1972, but it now has a visitor center, campgrounds, museum, ranger station, employee housing, and an extensive trail system. In October 1971, in anticipation of the upcoming dedication, park officials guided 135 people up McKittrick Canyon to view one of the park’s biggest attractions—the plentiful maple and ash trees that offer arguably the best fall color in Texas. Today, many thousands visit the park every fall to view the display in late October and early November.

Wilderness makes up most of the park, which cover 135 square miles. Hikers and backpackers flock to the park from all over Texas and beyond to explore some of the most beautiful scenery in the state. Only Big Bend National Park offers more extensive hiking opportunities in Texas. Since I was a kid, I’ve hiked almost all of the trails in the Guadalupe Mountains, most of them multiple times, including while researching my guidebook Hiking Texas: A Guide to the State’s Great Hiking Adventures, which includes detailed descriptions of the park’s trails.

Fall color, the four highest peaks in Texas, deep canyons, and sand dunes all do their part to attract more than 200,000 visitors every year to the Guadalupe Mountains. The following are some of the most scenic trails in the park. 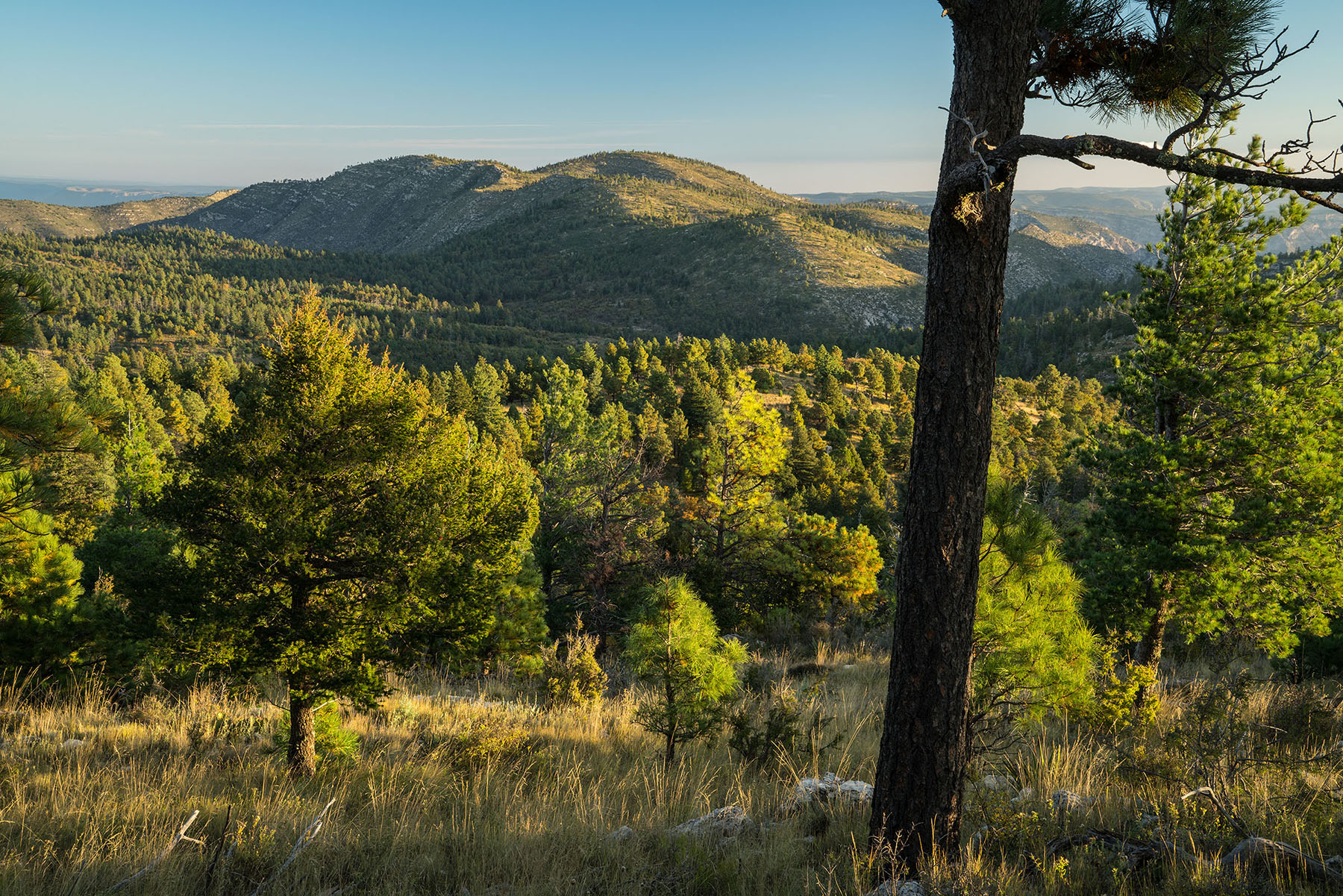 This strenuous hike in the Guadalupes climbs to the prominent summit of 8,368-foot Hunter Peak and the “Bowl,” a gentle mountain valley that lies at about 8,000 feet, invisible from the harsh desert far below. The valley contains thick grasses and a lush mountain forest of ponderosa pine, white pine, Douglas fir, and even a few well-hidden aspens. Hike the Bowl as a 10.5-mile loop up the Tejas Trail, up and back down Hunter Peak, through the Bowl itself, and down the Bear Canyon Trail. 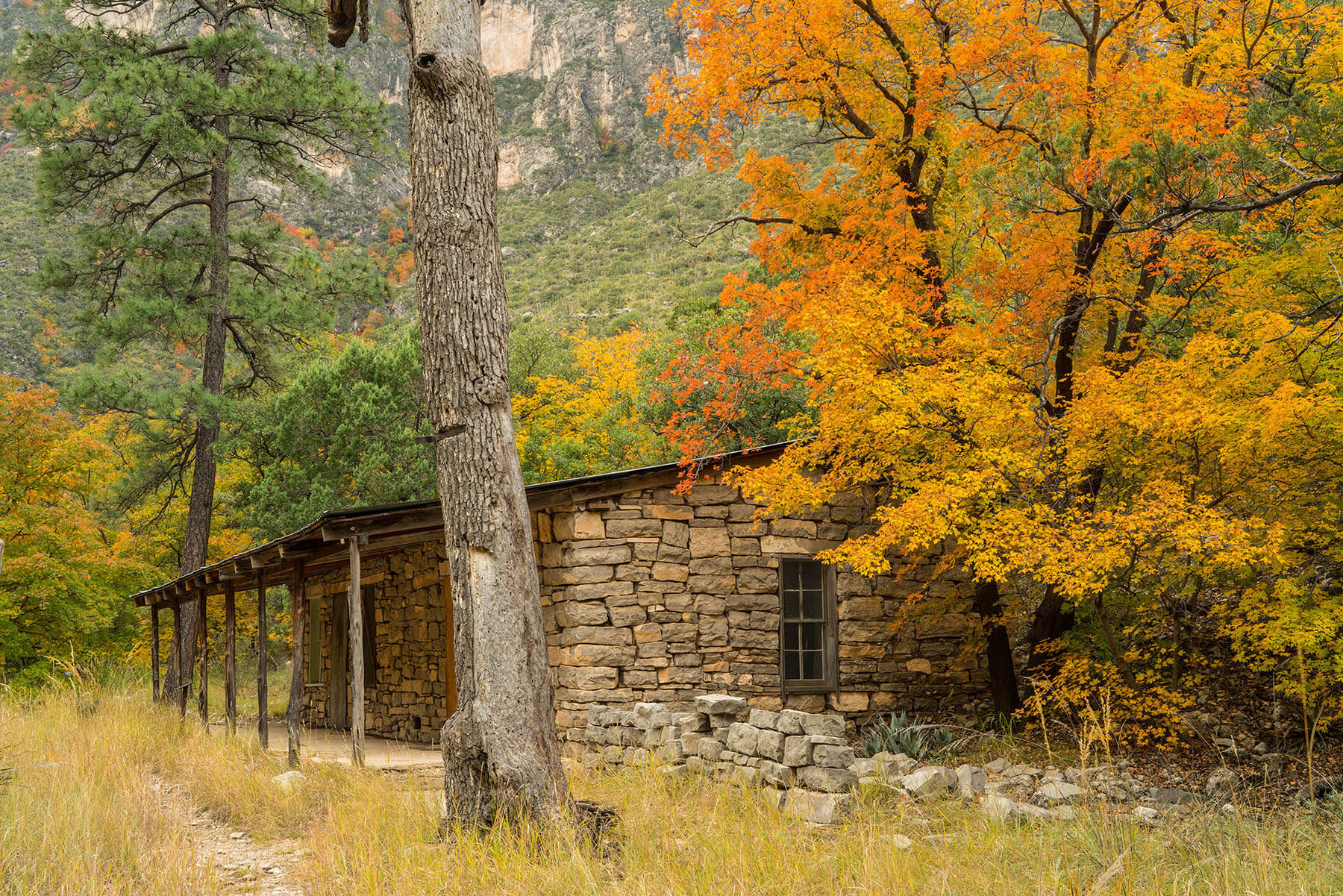 McKittrick Canyon became the heart of the national park when it was donated to the Park Service by petroleum geologist Wallace Pratt. Its abundant scarlet, orange, and gold fall colors continue to attract throngs of people in the fall, but the trail makes a pleasant walk yearround with its lush woodland, historic stone Pratt cabin, and permanent mountain stream. To hike to the Grotto in the south fork of the canyon and back requires an easy 6.8-mile round-trip hike with only about 350 feet of elevation gain. 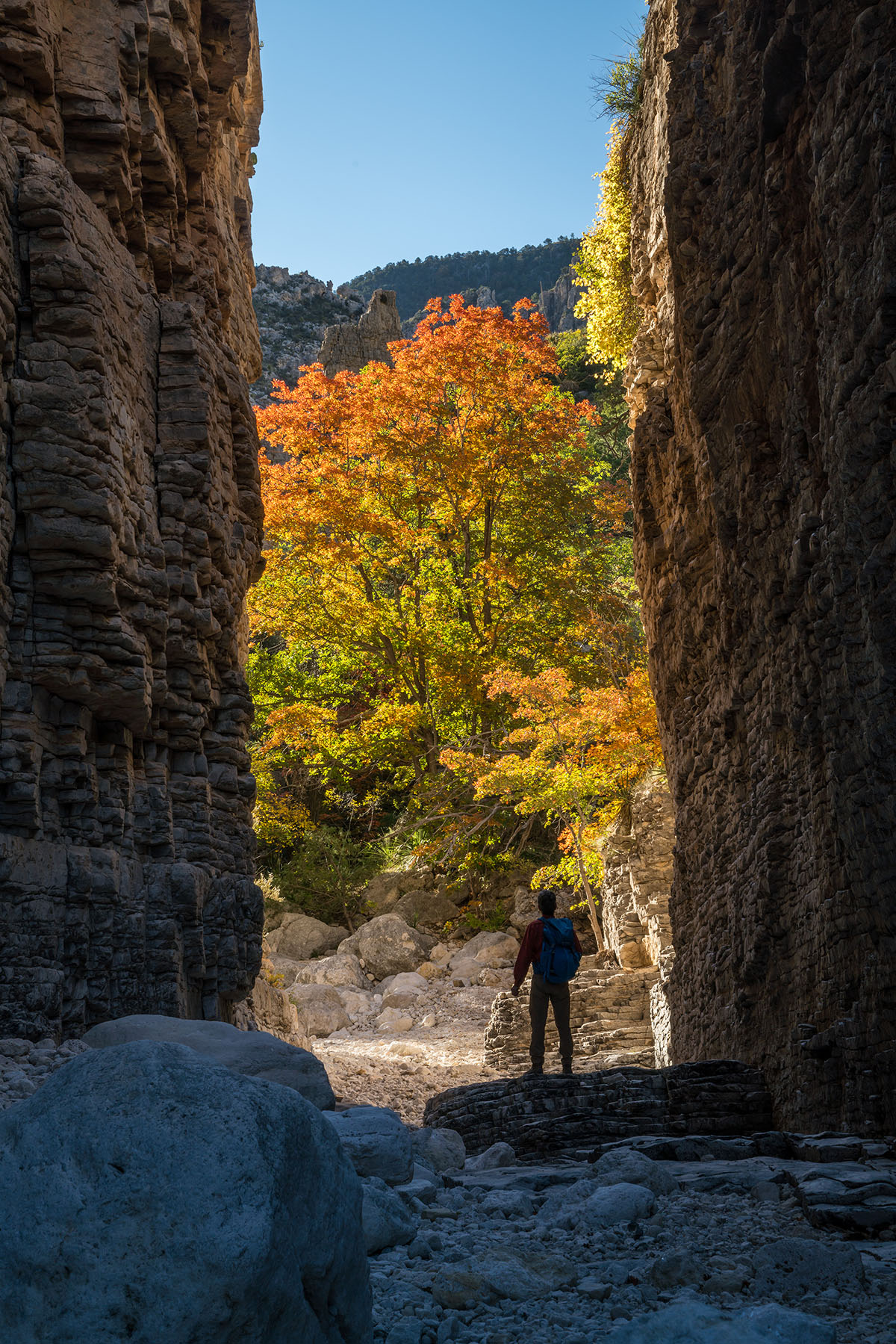 The towering cliffs of Pine Spring Canyon hide another classic Guadalupe Mountains trail. A 4.2-mile round-trip hike leads to the slot canyon of Devils Hall, a narrow chasm through which the entire canyon’s waters rush in big storms. It’s a dramatic spot to visit as long as heavy rains aren’t in the forecast. In addition, the canyon offers plentiful maple and ash trees with their beautiful color in the fall.  The trail climbs about 500 vertical feet to its end and requires some boulder hopping and scrambling in the upper part of the route where it lies in the canyon bottom. 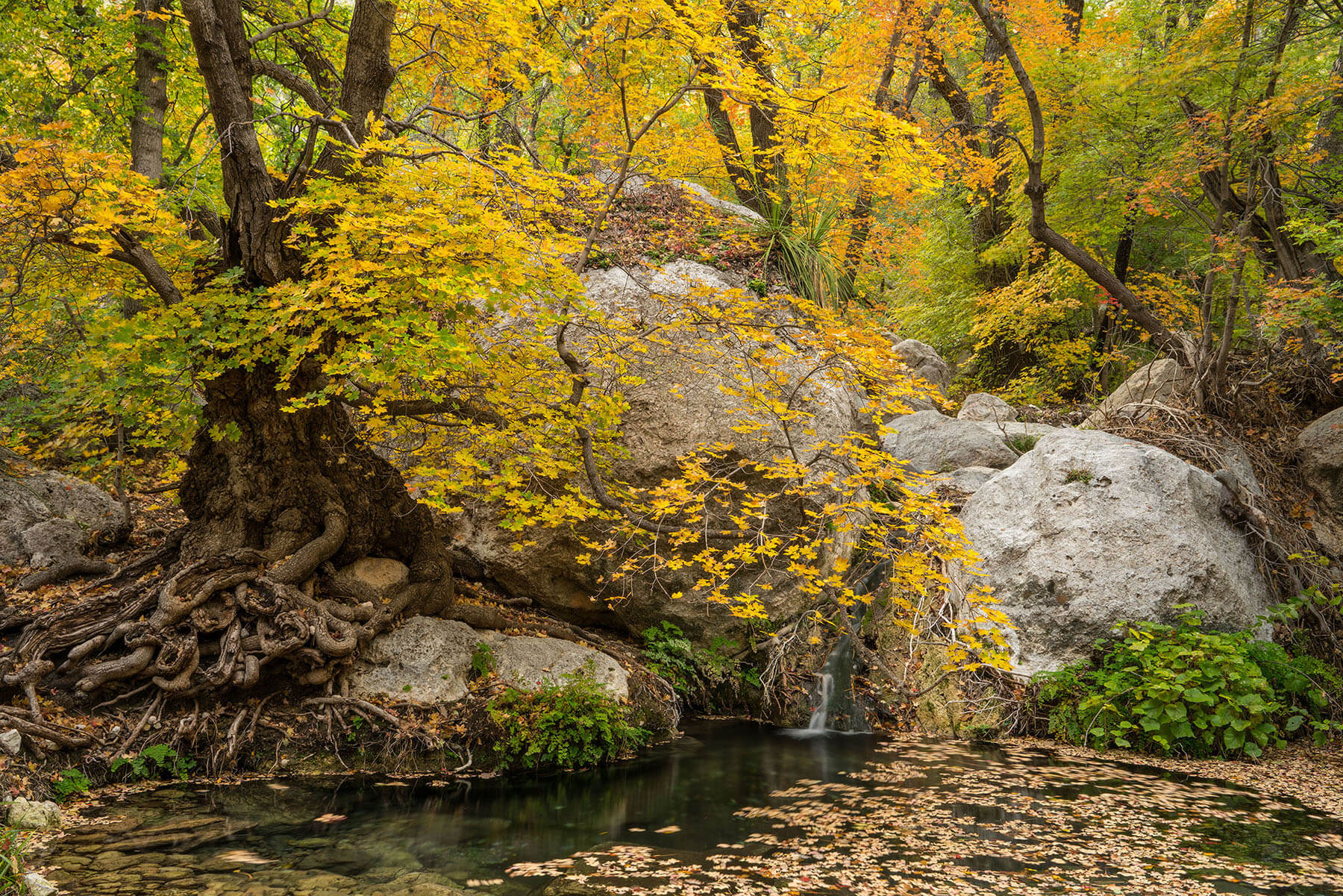 This trail offers not only an easy 2.3-mile loop that gains about 400 feet, but a museum and shady picnic tables at the historic Frijole Ranch house and spring at the trailhead. The first quarter mile of trail follows a very easy handicapped-accessible route to Manzanita Spring, a small spring-fed lake important to wildlife. From there it climbs to the shady oasis of Smith Spring, where a small stream flows down a canyon tucked into the base of the high peaks and waters a lush forest of tall ponderosa pines, smooth-barked madrone trees, mature chinkapin oaks, and colorful bigtooth maples. From there the trail loops back downhill to Frijole Ranch. 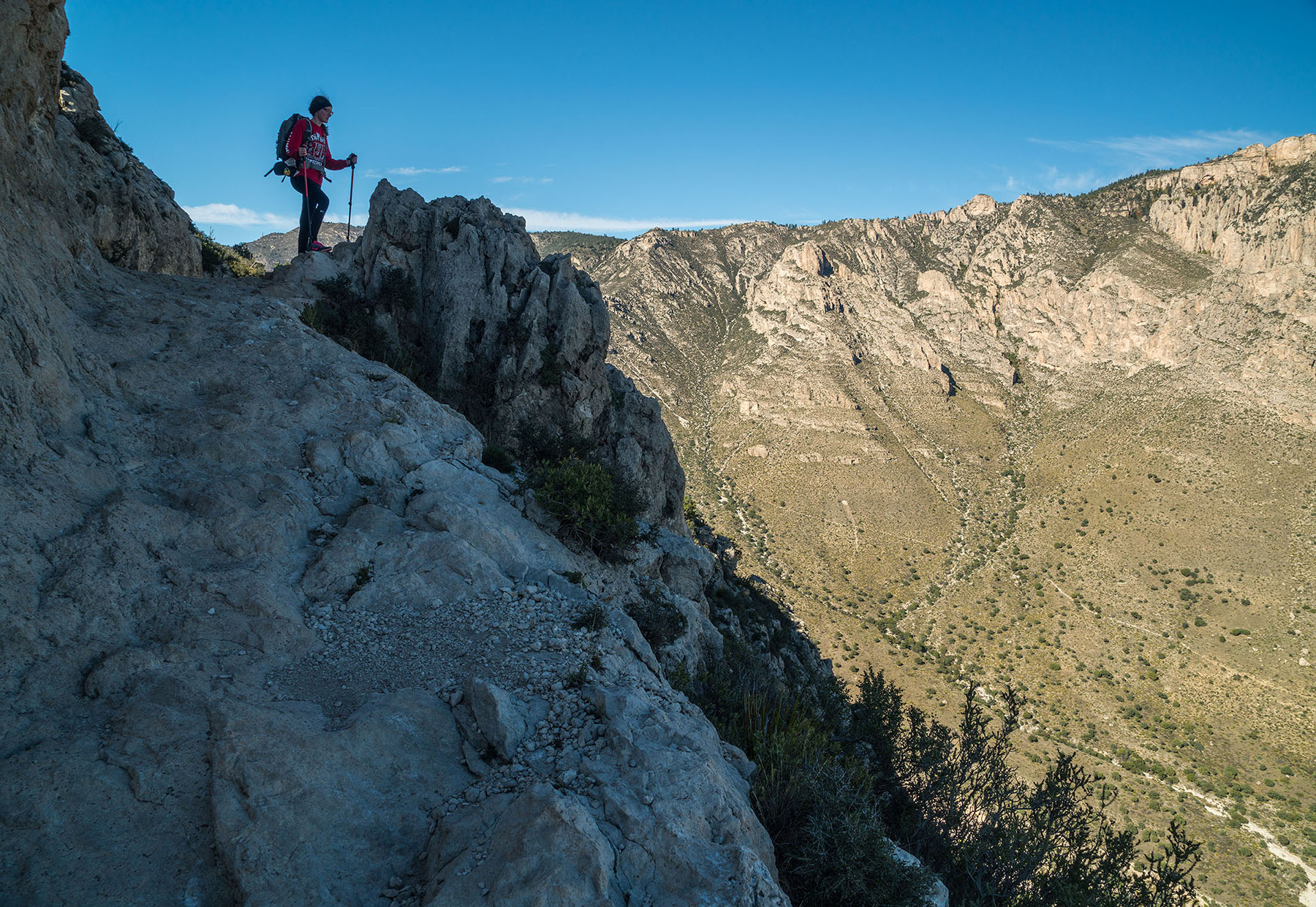 No list of park hikes would be complete without mentioning the highest peak in Texas. The arduous trail climbs steeply almost 3,000 vertical feet to the 8,751-foot summit over a round-trip distance of 8.4 miles. You will sweat to get there, but incredible views reward your climb. At the summit, views reach out 100 miles on a clear day, from the Davis Mountains of West Texas to Sierra Blanca Peak near Ruidoso, New Mexico. The Salt Flats reflect brilliantly white 5,000 feet below to the west, while many more rugged peaks stretch to the north across rugged Pine Spring Canyon.