Day of the Dead Comes Alive at Evergreen Cemetery in Houston

Since the 1960s. the cemetery in the Bayou City's East End has been a place to celebrate loved ones who have passed 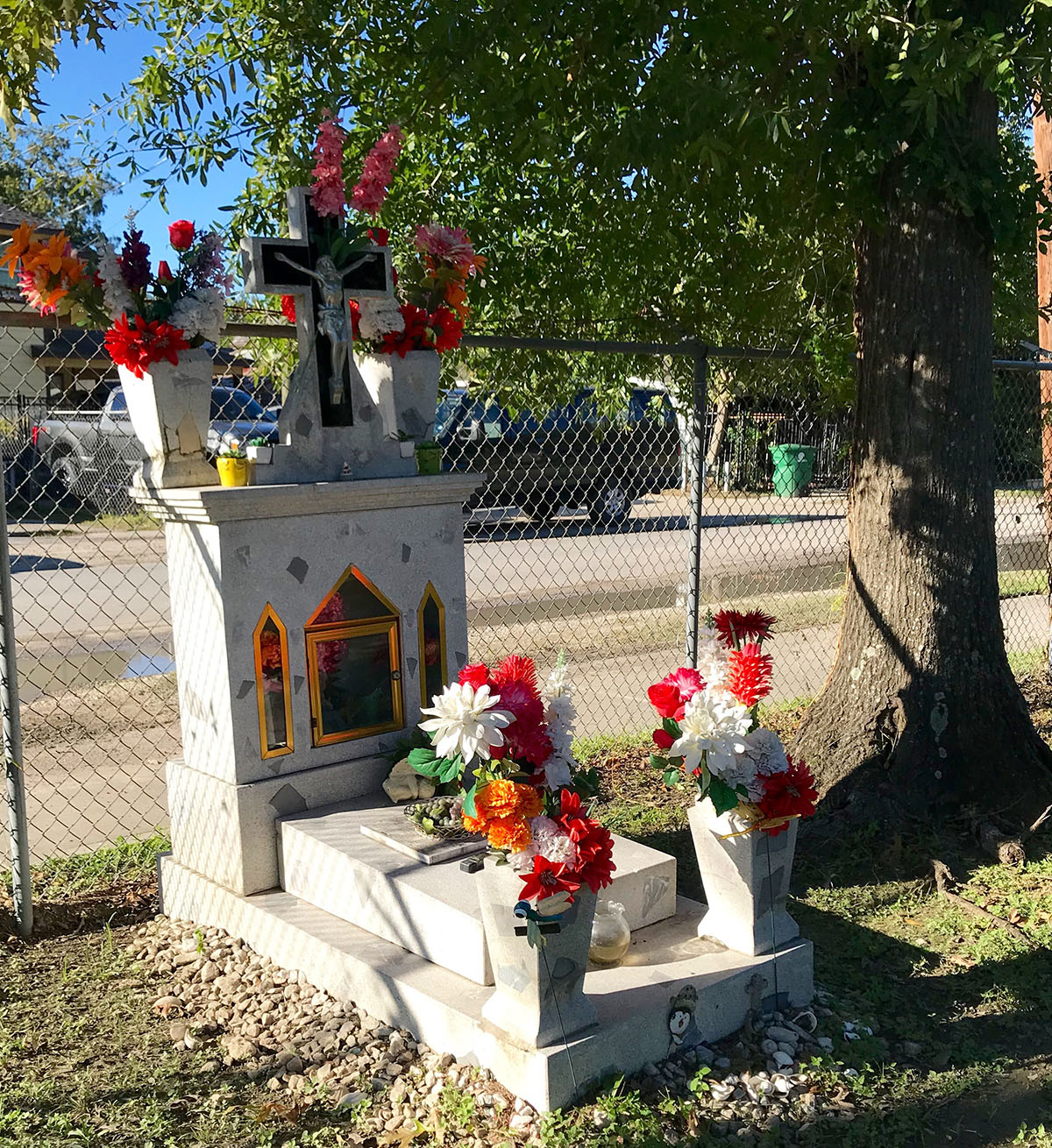 One of the colorful grave sites at Houston’s Evergreen Cemetery. Photo by John Nova Lomax.

It’s Día de Los Muertos here on the East End of Houston. The sky is crystal blue over Evergreen Cemetery, and a soft wind bears both the burnt-syrup smell of roasting coffee beans and the low moans of distant train horns and the crowing of backyard roosters closer at hand.

On this quietly festive Día de Los Muertos, around one such colorfully adorned, fenced-in grave, five gray-haired men and women with heads downcast serenade a loved one with a slow and tender song in Spanish, its words borne away on the breeze. A few of the mourners wipe away tears as they cross themselves at song’s end, then they walk to a nearby Blazer and drive away, gravel crunching under the truck’s tires.

All around you is a riot of color: graves painted pink, aquamarine, burnt orange, bright yellow, and flowers real and plastic in fuchsia, maroon, and hot pink. Wind chimes sigh over one grave, while kaleidoscopic pinwheels spin around others. Houston Texans and Astros mementoes adorn some graves; graves of children are decorated with statuettes of Minions and Mario, Minnie Mouse and My Little Pony; still others, those of adults, stand before offerings of whiskey or beer.

Mainstream Americans are slowly but surely gaining awareness of the Mexican folk conception of Day of the Dead, thanks in no small part to the 2014 hit animated film The Book of Life, whose creator, Tijuana-raised Jorge R. Gutierrez, explained the holiday thusly:

“The core belief of the [Day of the Dead] is so poetic and simple: as long as we remember those who have passed away, as long as we tell their stories, sing their songs, tell their jokes, cook their favorite meals, then they are with us, around us, and in our hearts. The moment we forget them, […] then they are truly gone.”

The wisdom of those words is borne out by the larger history of Evergreen Cemetery, one in which Mexican Americans figure most recently, but not entirely. Founded in 1894, culturally, it’s a tripartite patchwork of a graveyard. Here is how its state historical marker puts it:

Three distinctive ethnic burial arrangements exist here. Southern folk burial sites are often subdivided by families and enclosed by a fence with an arched gate. German families are buried together and their grave stones decorated by fine craftsmanship. … Hispanic grave sites tend to be individually situated and decorated with floral arrangements. Among those buried in the cemetery are veterans of conflicts ranging from the Civil War to World War II, city and county officials, and local labor group and fraternal organizational members including the Masons, Odd Fellows, Knights of Pythias, and Woodmen of the World.

Labor groups and Woodmen of the World: this is Houston’s home of the workingmen’s dead, in short. The painters’ union has a plot. A monument erected by two maritime unions marks the grave of longshoreman Johnny Kane, who was shot and killed by a strikebreaker during the Gulf Coast maritime workers strike of 1936. Another stone memorializes a Houston policeman killed during the Camp Logan mutiny and race riot of 1917, when, provoked by Jim Crow brutality, Black soldiers swept out of their training camp just west of Houston. Seeking vengeance on racist police, the servicemen launched a coordinated armed assault on neighborhoods adjoining what is now Memorial Park, shooting police on sight. (Those events are the subject of this year’s The 24th, a film written and directed by Spike Lee collaborator Kevin Willmott.)

The cemetery itself was only tangentially tied to those national stories. But Evergreen was the centerpiece of a news item, one that was more a morbid curiosity than it was historically important, back in 1936. A 32-year-old man named Jim Hooper, the cemetery’s resident caretaker and grave digger, fell dead of a heart attack while helping preside over the funeral of a man named Ramirez. As the son of the cemetery’s previous caretaker, Hooper became perhaps America’s first and only man to have been born and raised and worked and died and then buried in the same place—Evergreen Cemetery.

Beginning with the Mexican Revolution of 1910, immigrants and refugees streamed into barrios east of downtown, and as the East End changed around it, so did Evergreen. From the 1960s on, it’s been almost exclusively a burial place for Mexican Americans, many of whom came to that area seeking jobs at or around the Houston Ship Channel. As testified by the sturdy and creatively constructed graves, many were also skilled artisans, maintaining Evergreen’s blue-collar ethos.

I’ve been to dozens of Houston-area graveyards, and it’s my favorite. Many cemetery buffs prefer Glenwood, Houston’s mournful, Gothic/Victorian garden of good and evil, the final resting place of Howard Hughes, Texaco founder J.S. Cullinan, the Hobby family, Dr. Anson Jones (last president of the Republic of Texas), golden age of cinema leading lady Gene Tierney, and Astrodome impetus Judge Roy Hofheinz. With its rolling magnolia-scented hillocks dotted with marble angels and other sumptuous statuary, Glenwood is indeed bewitching and seductive. But it’s also high and mighty, with what seems like each and every headstone corresponding with a principal thoroughfare, concert hall, downtown edifice, or charitable foundation.

You won’t catch a whiff of roasting coffee beans there, nor will you hear the crow of a nearby yardbird. But Evergreen is earnest, as opposed to lofty, and brash as opposed to staid. While the graves at Evergreen are fanciful, some would say gaudy, they are sturdy and hecho a mano—made by the very hands of the people who love the people who are buried there.

These people were the artisans—this is where they sleep and these are the graves they have made for themselves, out of bricks, cinder blocks, iron and steel, glass, plastic, tiles, and stone—the material is immaterial, so long as it lasts and makes a loving statement about the dearly departed, who remain among us as long as we remember their dreams and sing to them their songs.