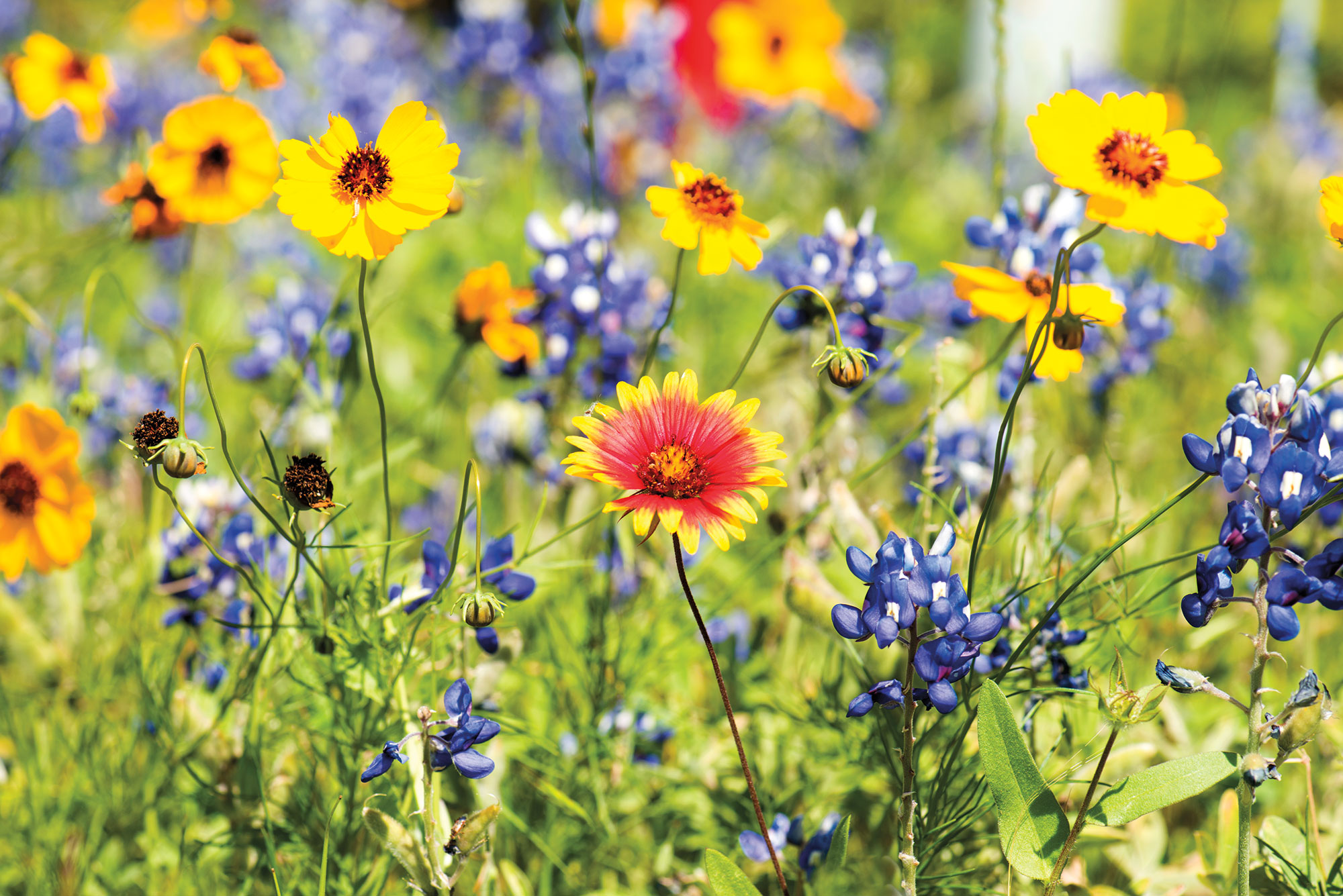 A mix of Indian blankets, bluebonnets, and greenthread.

Winter Storm Uri’s snow, ice, and frigid temperatures took a toll on flora and fauna across Texas. But if the state’s unpredictable weather has taught us anything, it’s that nature will prevail if we give it the space it needs to bloom and grow. Experts say that appears to be the case with our beloved spring wildflowers, including bluebonnets.

“Most native perennial or biennial plants, such as bluebonnets, fared just fine under the insulated snow and ice, and we should see great displays of our state flower,” says Jason Singhurst, botanist and plant ecologist for Texas Parks and Wildlife Department.

The timing of the snow is why it wasn’t too damaging for spring’s wildflower crop. Before the February storm, flowers had just barely started blooming thanks to unusually warm temperatures in January, says Andrea DeLong-Amaya, director of horticulture at the University of Texas Lady Bird Johnson Wildflower Center.

“If things get going really early, and then we have a later cold snap, there could be damage more later in the season,” DeLong-Amaya says. “But it’s still early enough, this time of the year, that the cold weather didn’t really do a whole lot of damage to most wildflowers.”

Beyond insulating the plants and pausing their growth, the snowmelt helped add moisture to the soil. Much of Texas has been abnormally dry, and parts of the state, particularly in West Texas, are in drought conditions. The February snow didn’t overcome the dry conditions, but it did provide water to help kickstart this season’s blooms, DeLong-Amaya says. Singhurst says this is promising for the blooms in Big Bend, although more rainfall throughout April would help.

Texans can expect to see the first round of wildflowers by mid-March, DeLong-Amaya says. This includes bluebonnets, golden groundsel, pink evening primrose, and brown-eyed Susans. Expect bluebonnet blooms to lead the wildflower parade and peak in April. Later in the spring season, horsemint and red-yellow firewheels will join the bunch.

Unfortunately, DeLong-Amaya says flowering trees may not show off their blooms this year. Many of them had already begun to produce their flowers before the winter storm. When the ice crystalized the trunks and branches, the flowers froze off and drifted to the ground.

“The trees are fine, but the flowers—it doesn’t look like they’re going to do much this year,”  DeLong-Amaya says. “I’m sure we’ll see some things blooming, but we might have fewer mountain laurels, red buds, plums. Those are all things that I’ve seen that have some flower bud damage.”

If you’re interested in checking out spring wildflowers, it’s easy to do so with social distancing in mind, whether walking through your neighborhood or taking a scenic drive. DeLong-Amaya recommends the Willow City Loop near Fredericksburg and the Brenham area. Of course, there’s also the Lady Bird Johnson Wildflower Center and its own complete list of wildflower hotspots across the state.

For those wanting to learn more about wildflowers, Singhurst recommends the social media platform iNaturalist, which allows users to document nature sightings and crowdsource identifications.