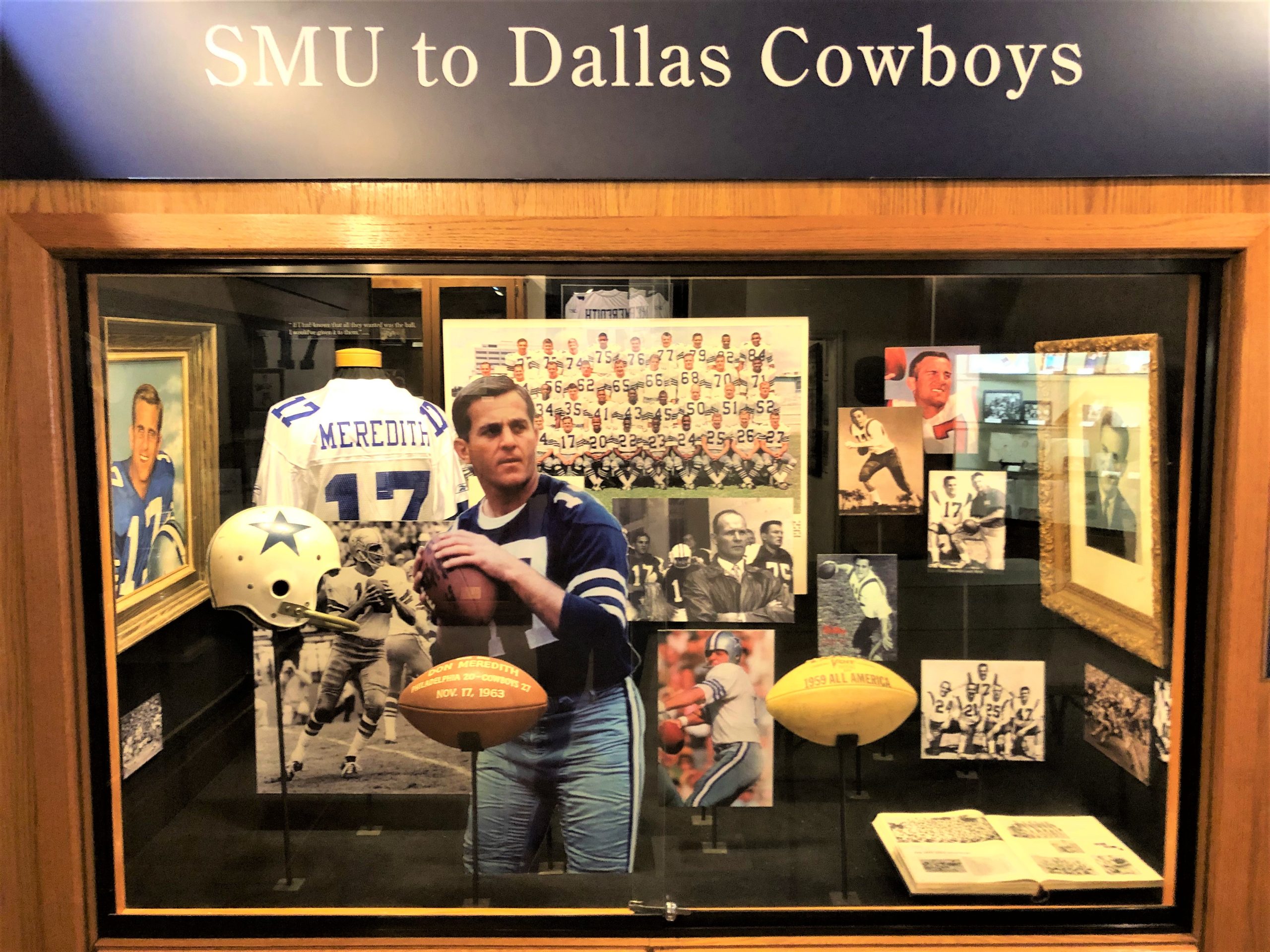 Memorabilia from Meredith’s transition from SMU to Cowboys

Fans of the early days of Monday Night Football will fondly recall Don Meredith’s twangy baritone voice singing the Willie Nelson classic, “Turn Out the Lights, the Party’s Over.” It was indeed time to turn out the lights and switch off the television, because that week’s game was history.

The permanent Don Meredith Memorabilia Exhibit at the Old Fire Station Museum in Mount Vernon helps to bring his life into focus. It’s a love letter to their hometown hero who passed away in 2010.  Many of his treasures are on display in this 1940 Works Progress Administration-era stone building, run by the Franklin County Historical Association, just a block off the town square.

At the museum, longtime Meredith friends Ken Greer and Frankie Cooper tell stories about the items in the glass display cases, each case like a time capsule, detailing a segment of Don’s life. Memorabilia from Meredith’s high school, college, professional football, and broadcasting careers are on display. Also featured are mementos from his early childhood and his acting career, in which he starred in 1970s and ‘80s movies, TV dramas, talk shows, and commercials.

A video highlights the thermometer-busting 13-below-zero “Ice Bowl” game, played on December 31, 1967, in Green Bay. The Packers narrowly defeated the Meredith-quarterbacked Cowboys in the final seconds of that NFL Championship game, the coldest played on record. Nearby, Don’s refurbished jukebox contains many of his favorite songs from the era, including the 45-rpm record that he cut in the 1960s, featuring “Travelin’ Man,” and on the flip side, “Them That Ain’t Got It, Can’t Lose.”

Subscribe to Texas Highways
To many, Meredith’s high school basketball talent was even better than his excellence in football, thanks to his being ambidextrous. One case features a photo of him and his basketball teammates, with Don wearing calf supports under his socks due to his weak legs in childhood. The story goes that Meredith’s opponents saw what he was wearing and thought it must be his secret weapon. After buying some of their own, they were dismayed to discover that the supports didn’t make any difference in the quality of their play. 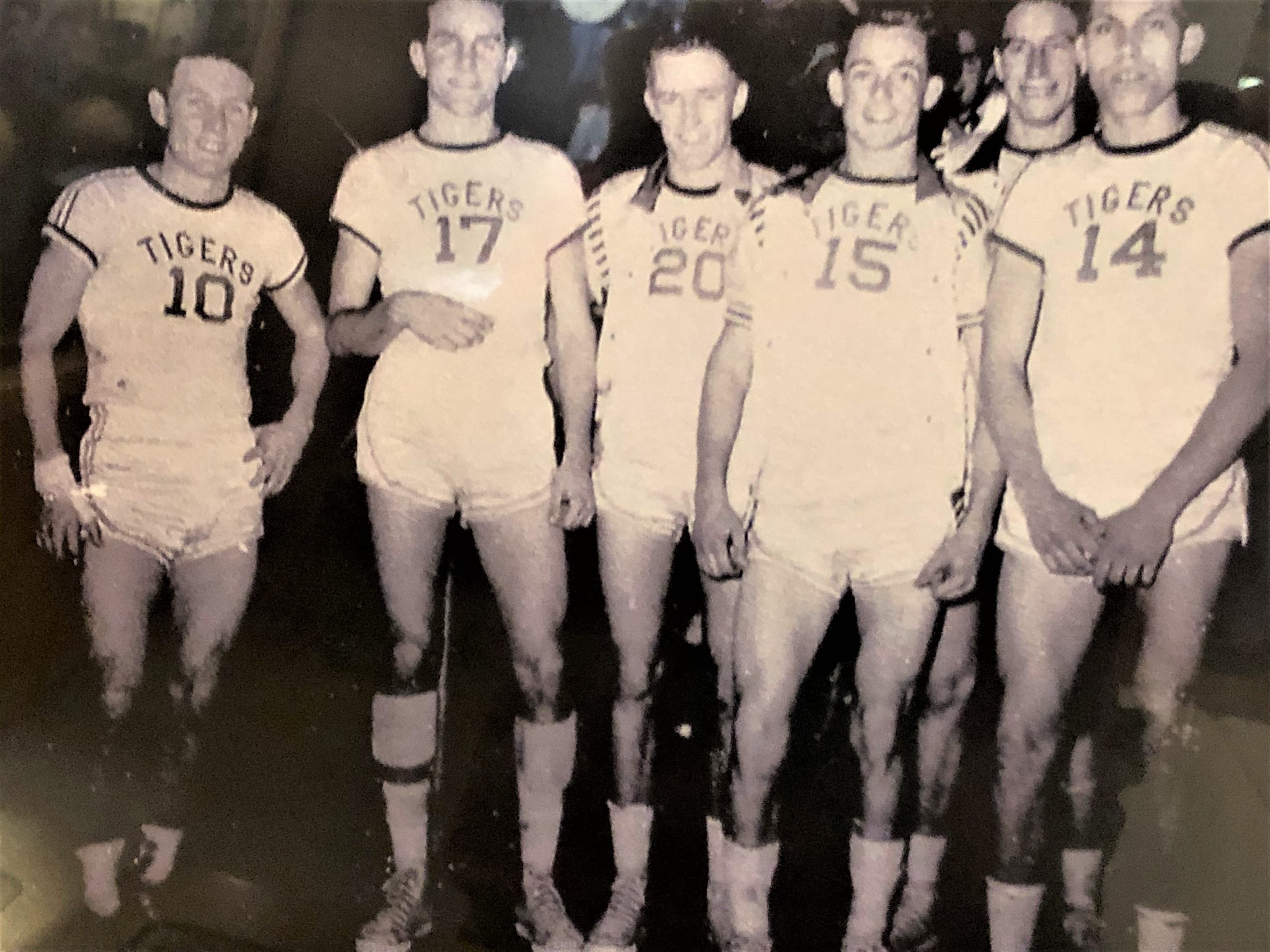 In an adjoining case sits an old ice cooler and trophy from the Dr Pepper Invitational of 1954. In this Dallas-hosted basketball tournament, tiny Mt. Vernon won the championship against high school powerhouses of the day, with Don scoring a whopping 52 points in one game.

Football became Meredith’s sport at Southern Methodist University. He had worn his older brother’s number 88 on his jersey until, hearing that quarterbacks’ numbers don’t go that high, he decided on 17 because 1+7 equals 8. He decided on SMU because, he retorted, “I can spell it.” He went on to be recognized as an All-American in 1958 and 1959. Both his SMU and Dallas Cowboys jerseys are prominently displayed.

Meredith’s sports career solidified in 1959, when he signed a 5-year personal services contract with oil magnate Clint Murchison, Jr., the soon-to-be owner of the brand-new Dallas Cowboys NFL franchise. Before retiring after the 1968 season, Meredith threw for over 17,000 yards, was selected three consecutive years (1966-1968) to the Pro Bowl, and was one of the first inductees into the Cowboys Ring of Honor.

But those weren’t his only accolades: the exhibit also displays the Emmy award Meredith earned in 1971 for his role in Monday Night Football, beginning in 1970. One of his ABC broadcasting jackets is prominently featured above it. Even his sidekick, the bombastic Howard Cosell, would have been impressed.

Who visits the Exhibit? Curious sports fans, ex-teammates, and a host of other admirers. Ken Greer tells the story of a stranger who entered the museum and began smiling from ear to ear. He said, “Don Meredith was one of my very best friends.” “How did you know him?” Ken questioned. The fellow answered, “I never met him.”

For a totally different viewing experience, just walk up the narrow staircase. A small climate-controlled room displays 222 species of bird eggs collected prior to 1900, years before the practice was banned. Three of those species—the passenger pigeon, the heath hen, and the Carolina parakeet—are now extinct. The A.W. Nations family purchased the collection and eventually donated it to the Franklin County Historical Association. Also displayed upstairs is an eye-catching butterfly exhibit as well as area artifacts covering several time periods.

“We didn’t have to say any more,” Ken said to me. “Don was in everybody’s room (on TV), in the den where you ate, in the room where you laughed and cried, rooting for the Cowboys. He was there.” 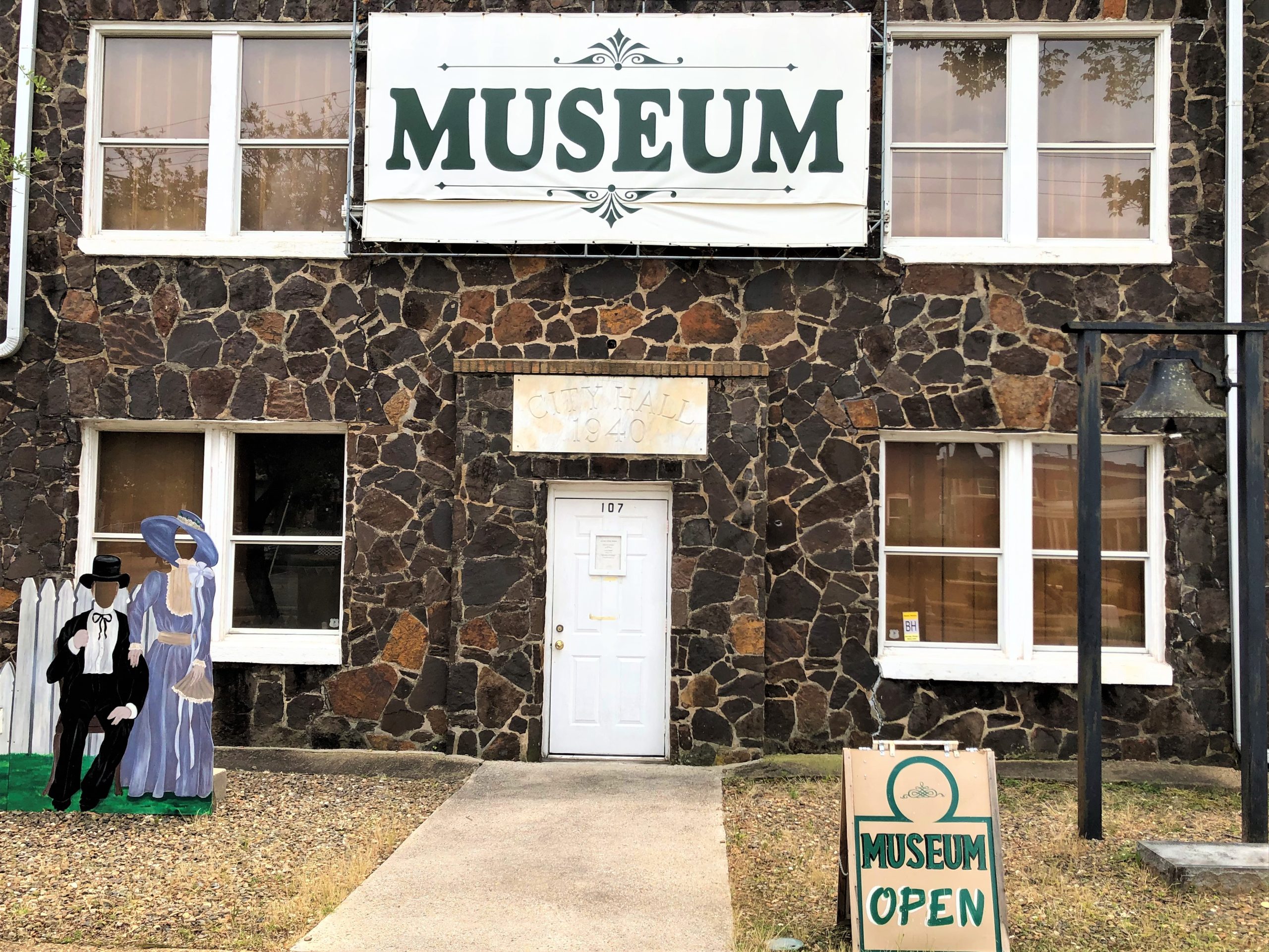 Perhaps Meredith’s proudest accomplishment is commemorated below a photo of his parents, Jeff and Hazel: a plaque listing Mount Vernon High School’s annual Don & Susan Meredith Humanitarian Scholarship awardees since 1997. Meredith and wife Susan donated the money to recognize the high school awardees’ character, rather than for their academic or athletic achievements. Through the scholarship, he continues to pay tribute to the hometown he loved.

His birthplace and grave are both located in Mount Vernon—fitting for a man who never forgot his hometown roots. So, if you ever heard that Willie Nelson song made more famous on Monday Night Football, the party may not be over after all. Thanks to Meredith’s legacy, it’s still going strong.