New Max’s Restaurant, Gerry’s Grill, and Jollibee locations capitalize on the rising popularity of Filipino food in the U.S. 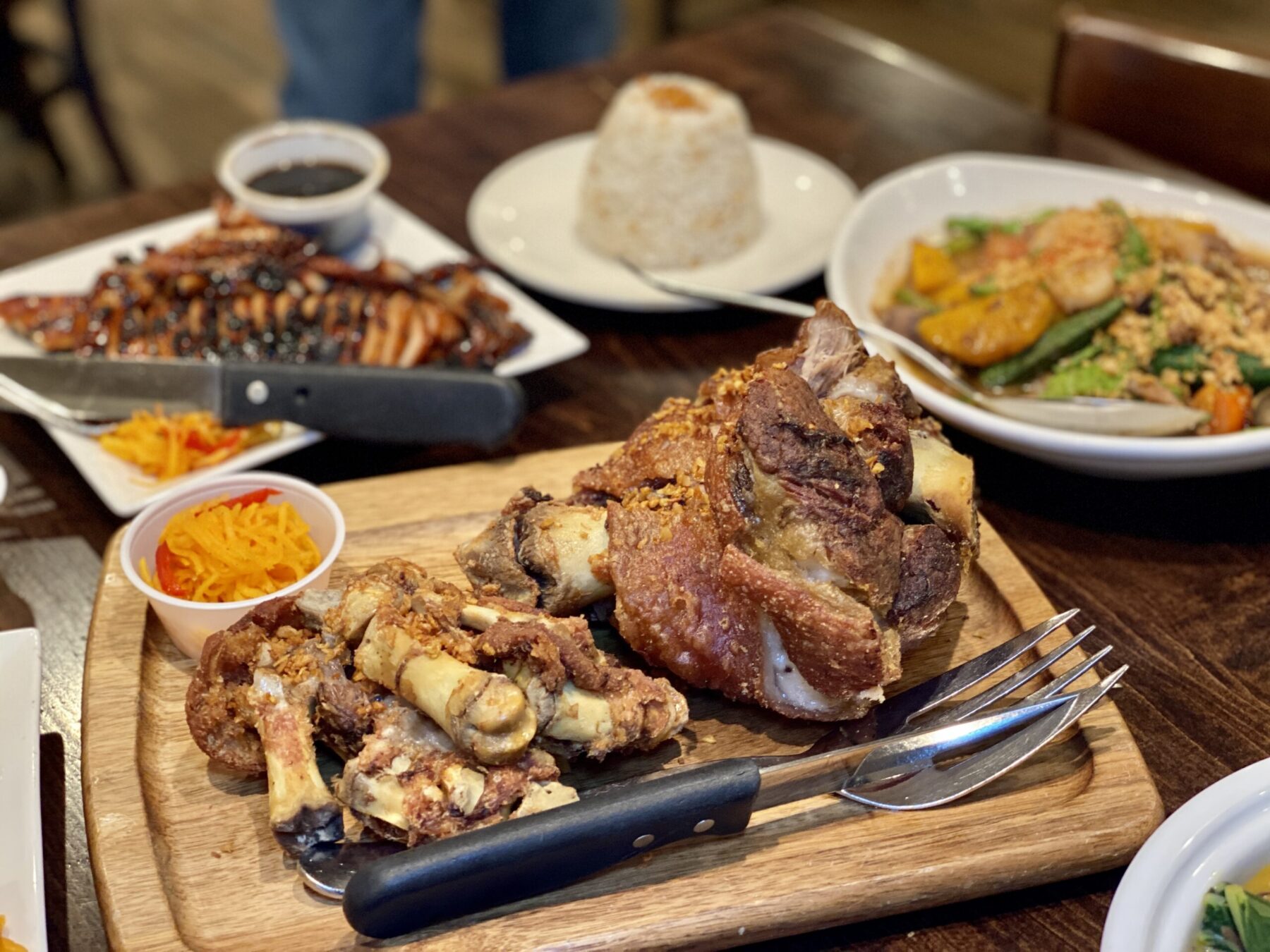 The crispy pata is a popular pork dish at Gerry’s Grill.

It’s a well-known fact that Houston boasts one of the most diverse eating cultures in the state. With more than 10,000 restaurants serving the food of over 70 countries, the list of cuisines you can find in Houston is almost endless. From Vietnamese to Jamaican to Lebanese to Nigerian—if you have a craving for it, you will likely find it in Houston.

But up until 2018, the options for Filipino cuisine in Houston were very limited. “We only had a few Filipino restaurants in Houston at that time—a buffet restaurant, a small café, and [fried chicken joint] Jollibee,” Suzette Garriel says. Her family brought the first of the big sit-down Filipino restaurant chains to Houston with the opening of Gerry’s Grill in the Asiatown area in February 2018. And many other popular fast-food and casual chains from the archipelago and beyond have followed, most notably Max’s Restaurant, which features an extensive menu of classic Filipino dishes; and Be More Pacific, a modern Filipino restaurant founded in Austin. Since Gerry’s opening, Jollibee has added two additional Houston locations.

The popularity of Filipino food has been on the rise in the U.S. in the last several years, and the highest population of Filipinos in Texas reside in Houston. According to Garriel, opening chain restaurants that already have a dedicated following is considered less risky than opening an independent restaurant, but still satisfies the demand for Filipino cuisine.

Garriel and her family had been regular patrons of Gerry’s Grill locations in California and the Philippines for years when the opportunity to open a Houston franchise became available in 2016. Despite having little experience in restaurants, they jumped at the chance to bring their favorite restaurant to Houston.

Gerry’s Grill has more than 100 locations in Singapore, the Philippines, Qatar, the United Arab Emirates, and the United States. One of the chain’s famous dishes is the crispy pata, a giant pork hock fried whole until most of the fat is rendered, leaving crispy, chicharron-like skin and fall-off-the-bone meat. The more traditional homestyle dishes include kare kare (a peanut sauce-based oxtail stew), pancit (a type of stir-fried noodle), bulalo (beef shank soup), and the house special sizzling pork sisig (sizzling marinated pork belly). 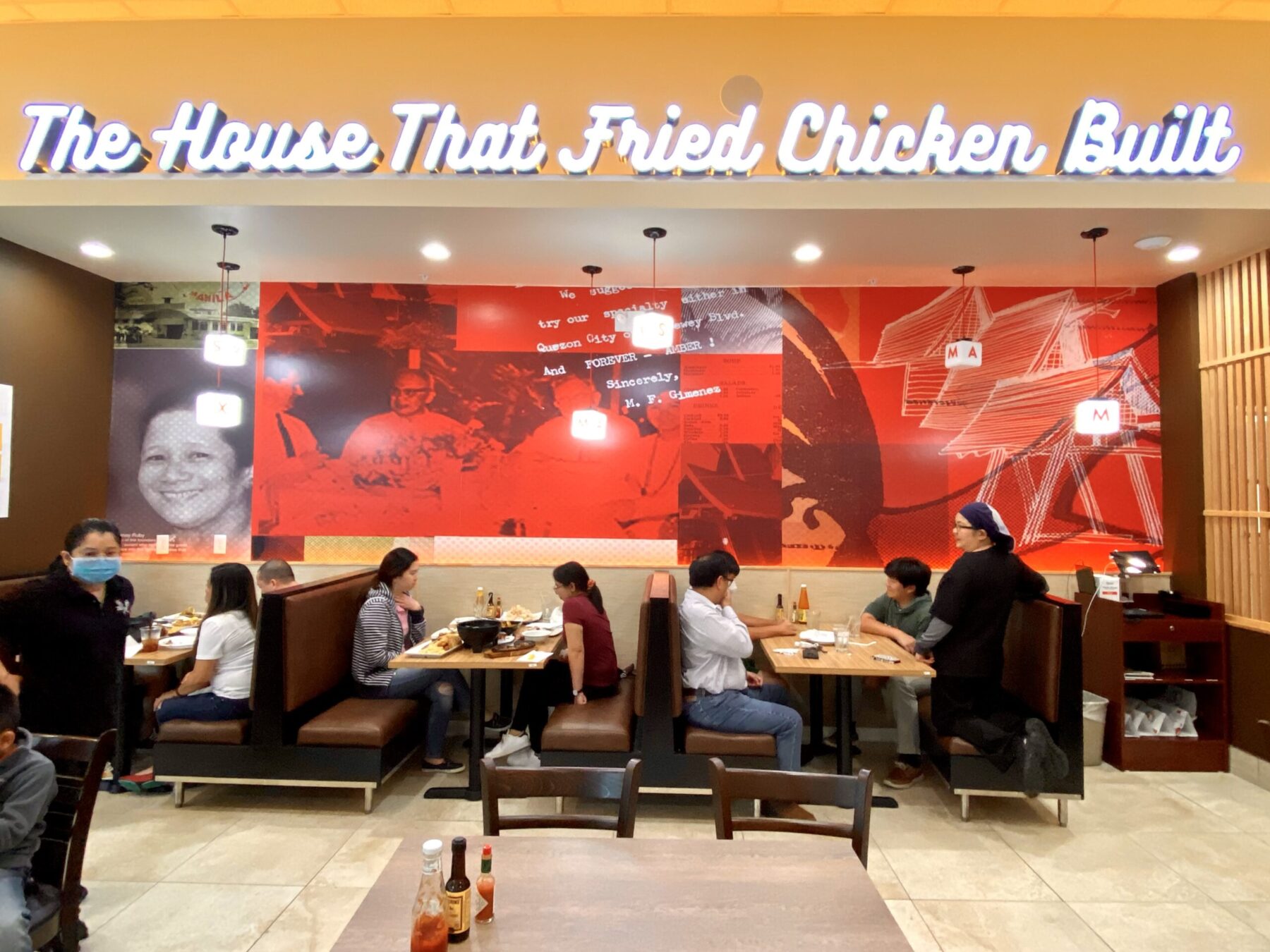 The interior of Max’s Restaurant in Houston.

“Filipino food is a mix of all Asian cultures,” Garriel explains. “The Philippines was colonized by the Spanish, Japanese, and Americans. Eventually we created our own dishes, so it’s a mix and fusion of these cultures. There’s notes of Spanish paella, Chinese dim sum, and more, so the food has sourness in combination with a little bit of saltiness and a balance of sweetness.”

Since the opening of Gerry’s Grill, Filipino chain restaurants are opening with more frequency in Houston. Pinoy Corner has become the go-to spot for people wanting to experience Filipino cuisine. Anchored by a Jollibee, the shopping center is also home to Red Ribbon; Cherry Foodarama, a small Filipino grocery store; Max’s Restaurant, another famous chain with 200 international locations; and the forthcoming Yellow Cab Pizza.

While Filipinos are already flocking to their favorites, these restaurants need to draw in a wide range of customers for long-lasting success. “Filipino food, as good as it is, it’s not as well known or as famous as other types of cuisines—that’s the challenge,” Garriel opines. “At this point in time, the big Filipino group of famous experts and chefs in America are still trying to penetrate the market so that eventually, Filipino food will be something people recognize and understand in the same way that they do Chinese or Japanese food—and that’s our goal [at Gerry’s in Houston] as well.”