Five hundred and sixty feet above Dallas, a revolution awaits 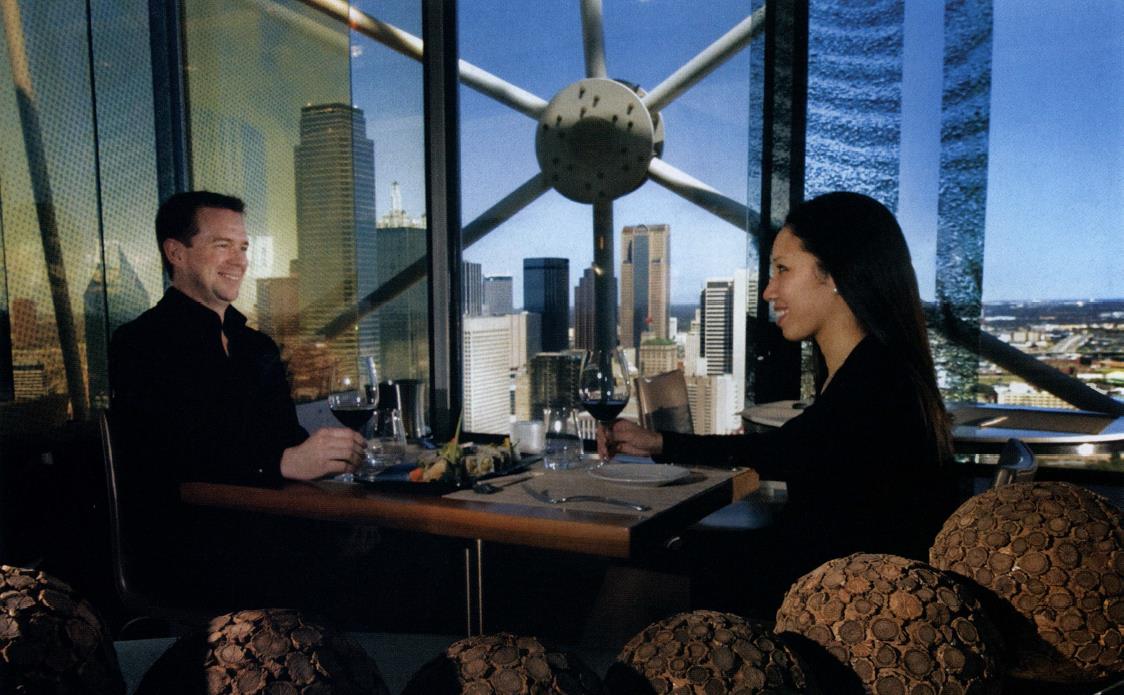 The magnificent Five Sixty by Wolfgang Puck, at the top of Reunion Tower in downtown Dallas, has been my go-to choice for fine dining and entertaining guests since it opened in February 2009—not just for the spectacular food, but also for the drama of dining 560 feet above the city.

Reunion Tower itself has been a Dallas icon since it opened in 1978, its geodesic sphere illuminated with 260 lights that shine in unison or dance in playful patterns. For nearly three decades, visitors could take an elevator to three levels within the dome, where an observation deck offered birds-eye views of the city, a revolving restaurant called Antares wowed diners, and a cocktail lounge offered spirits with an unparalleled sky-high ambiance.

In 2007, though, the Tower and adjacent Union Station—the latter built in 1916, and which once handled as many as 80 trains daily—closed for a grand, $46 million renovation. And as a highlight of the transformation, city planners announced that chef Wolfgang Puck, the “fusion chef” famous for such trendsetting restaurants as Spago and Chinois, would open a new restaurant inside the tower. Five Sixty is Puck’s first fine-dining restaurant in Texas.

After a barely 60-second elevator ride to the top of the tower, the doors open to the comforting hum of clinking glasses and lighthearted conversations. Steely gray booths intermingle with cream-colored leather chairs, mesquite flooring gleams underfoot, and pearly white river rocks in a chain-link cage separate the host area from the bar and dining spaces.

“Given Five Sixty’s Asian-focused menu, we were inspired by a Zen sense of balance and stillness,” says Jennifer Johanson, who designed the restaurant with her team at EDG Interior Architecture + Design. ”We tried to balance the motion and incredible views from this high outlook with a sense of intimacy and stillness in the social spaces. We wanted to create a great restaurant experience, where guests can enjoy the stunning views but still maintain a focus on food and friends.”

The dining room takes about an hour to revolve a full circle. Familiar landmarks such as Dealey Plaza, the Old Red Courthouse, and Dallas’ futuristic l.M. Pei-designed City Hall take on new drama seen from above. The frenetic lights from the jumbo screens outside Victory Park’s American Airlines Center  glow behind a cluster of Dallas’ new high-rise condos. The recently imploded Texas Stadium is no longer on the horizon, but you can see its replacement, Cowboys Stadium, in the distance, with the Trinity River in the foreground. And in nearly every direction, traffic on Dallas’ web-like network of freeways and bridges provides a hypnotic stream of flickering movement.

“I love Dallas by night when all of downtown is lit up. When you look out the window, it feels like you’re in Manhattan,” Puck says.

Until renovations are complete on the observation deck below the restaurant, Five Sixty offers the only opportunity to take in the panoramic views. But  that’s not the only reason people flock to Five Sixty. The Wolfgang Puck brand entices diners because it’s synonymous with quality and innovation. In Executive Chef Sara C. Johannes, Puck has found someone who understands his vision yet incorporates her own style, flavors, and techniques. “Sara is a brilliant young chef,” says Dallas chef Stephan Pyles. “To have creative, perfectly executed food in a revolving restaurant far above the ground is a real
rarity. I know Wolf is proud of her.”

For a first course, pork-belly dumplings drizzled with black vinegar and chili oil fuse Asian favorites with Texas ingredients, as does the “General Tso” style crispy quail on the entree menu. And Puck’s most famous appetizer, a spicy tuna tartare served in a sesame-miso cone, is as popular at Five Sixty as it is at Spago, where it originated.

Many guests come for the sushi alone, thanks to the freshness of the seafood flown in daily from Maine, Alaska, Japan, and Hawaii. The creative  interpretation of Sushi Chef Hiroyuki “Fuji” Fujino makes every dish a work of culinary art. Such subtle touches as fresh herbs transform a sushi roll visually and on the palate. Highlights of the sushi menu include the Surf and Turf Roll, which features poached lobster, garlic, chili aioli, and seared Kobe beef; and the Crispy Tempura Dynamite Roll, which combines sea scallops, cucumber, chili, and sweet soy.

Cocktails at Five Sixty feature exotic ingredients like Thai spice-infused vodka, fresh blood orange puree, and house-made tonic water. More than 400 wine options and a dozen or so varieties of sake and beer selections round out the libation menu. And Happy Hour here—Monday through Friday from 5-7, when a sampling of appetizers and cocktails costs $5.60 each—offers a chance to enjoy the view and ambiance without the expense of a full dinner.