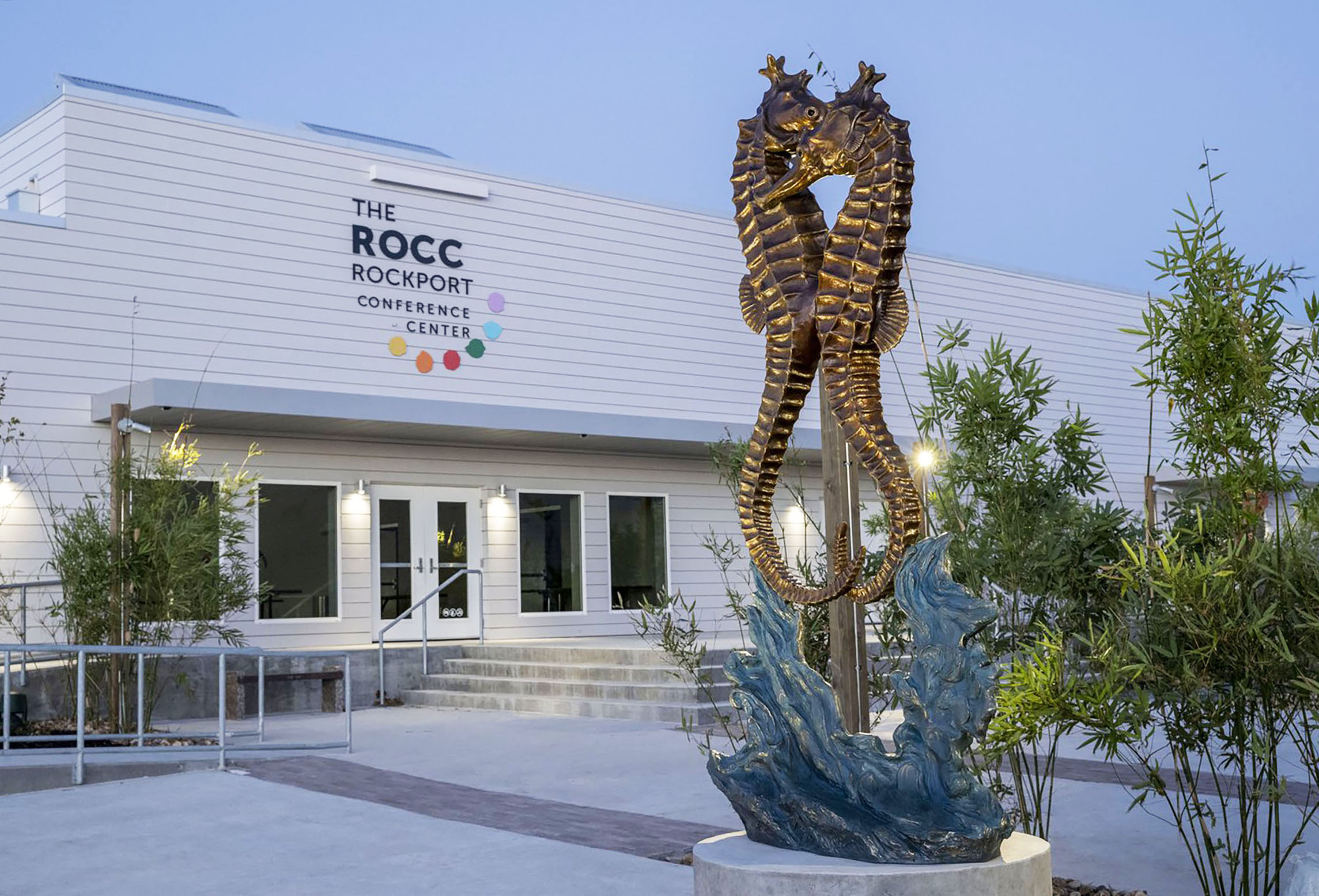 When Hurricane Harvey ripped through the Texas coast in 2017, the damage was catastrophic. Devastating winds, rains, and floods not only destroyed buildings and personal property but also displaced entire communities.

While much of the media attention from Harvey was focused on Houston, where significant chaos was unleashed, cities like Rockport in Aransas County, 30 minutes northeast of Corpus Christi, also took a severe hit, with the seaside town of around 10,000 inhabitants experiencing unimaginable damage.

One Rockport community space was damaged so badly that it had to be torn down: the Rockport Center For The Arts. The 5,762-square-foot sky-blue Victorian house, which was built in 1890 and had served as an arts center destination in the town since the early ‘80s, was demolished after being declared a total loss by the insurance company.

With that, a whole community of artists, art admirers, and patrons were left without an arts center to call their own. But that changed on Dec. 11, when the center opened its sleek new 1.2-acre, $12.5 million campus, which includes a 14,000-square-foot visual arts and education building, a 16,000-square-foot sculpture garden, and an 8,000-square-foot meeting and event space. It’s a big step in the healing process for the community.

Five years ago, the center’s beloved former home was just a facade of its former self—left with a roof ripped off, a porch overhang blown off, and numerous works of art and sculptures damaged. Luis Purón, executive director of the center, returned five days after the storm to assess the damage and was taken aback by what remained. “Of course you imagine the worst, but when you see it, it’s really unimaginable,” he says.

Rockport Center for the Arts

In a city as small as Rockport, one might assume that losing a community art space wouldn’t be felt beyond the borders of the fishing and conservation-centric town, but Rockport is also a renowned, influential artist colony, much like Marfa. In the late 1940s, a school of fine arts was opened by artist and teacher Simon Michael, who was one of the instrumental figures in transforming Rockport into the respected artist colony it is today. Though the school is no more, the legacy of Michael and his championing of the arts is still present.

Even when Purón first came to visit the town as a tourist 30 years ago, he knew that he had stumbled upon something amazing. “I was going to different art galleries, and I remember thinking, ‘What a cool town,’” he says. “I visited 10 or 12 galleries then, so it was really karmic to be offered the job in a little community I had fallen in love with all those years ago.”

Though it would have been easy for Purón to let the trauma of Harvey put the center’s goals on hold to assess and recover, the executive director knew that the “show must go on” and found a way forward. His friends at the Art Museum of South Texas in Corpus Christi offered to host the center’s pending exhibit, Birds in Art, in their space. So on Sept. 28, 2017—just a little over a month after Harvey hit—the show did go on, with over 200 Rockport residents being bused in to see the exhibit on display.

“For many of us, it was the first time we had seen each other cleaned up in a month,” Purón says. “I still can’t believe that even happened, but I look back on that time and realize that was the beginning of our renaissance.”

And it was. Over the coming years, the center began planning and fundraising to rebuild what was lost during the hurricane. But this time around, the space needed to be a reflection of where the Rockport art community had come after all these years, which had evolved far beyond those original 5,782 square feet. 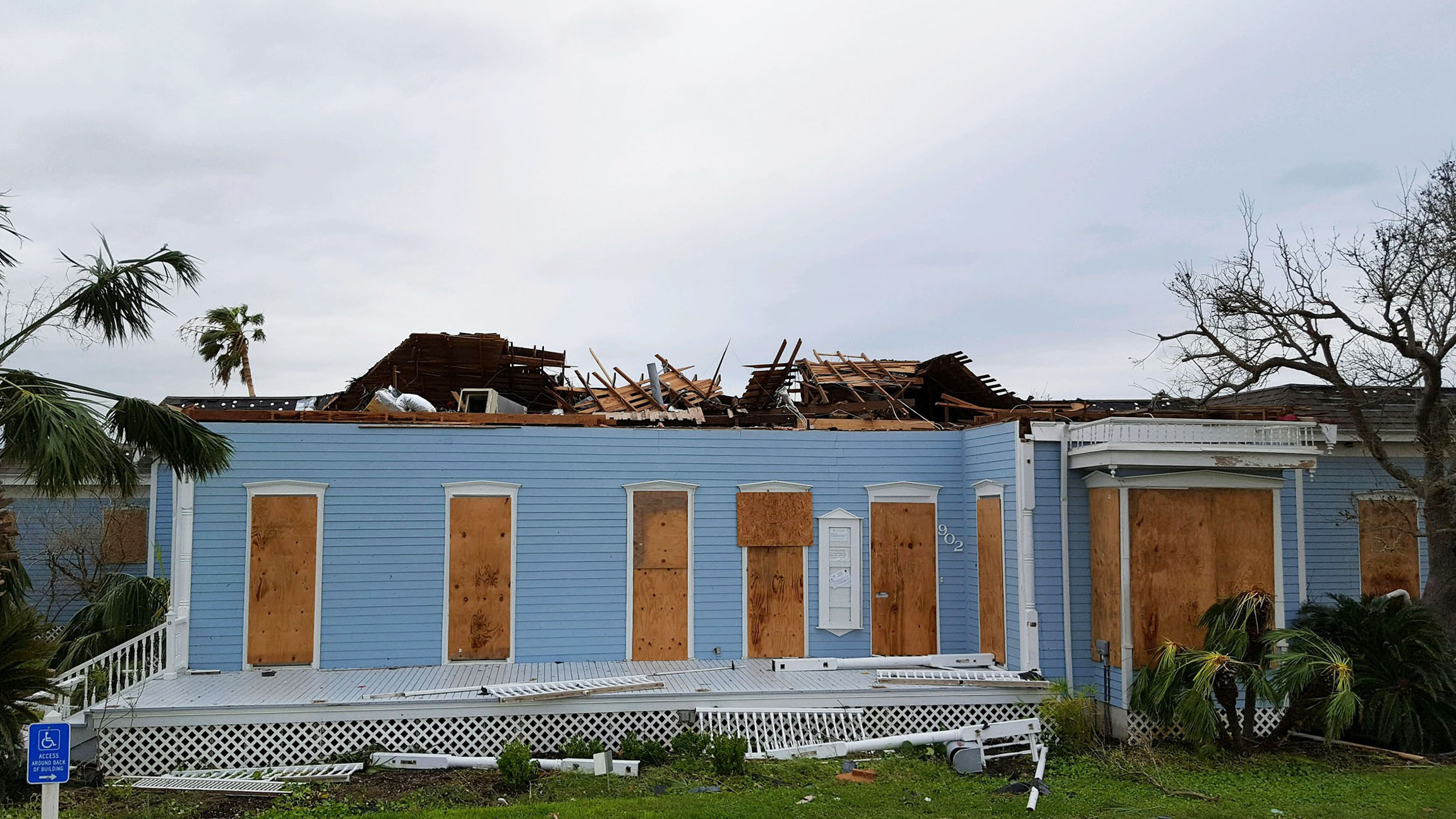 The former home of the Rockport Center of the Arts was torn down after being destroyed by Hurricane Harvey. Photo courtesy Luis Purón.

Purón remembers spending many days in the Victorian RCA house breaking down and transforming rooms to suit the needs of the day and found the continual, repetitive process exhausting and limiting. The antique house was designed to be a space full of bedrooms and foyers, but the new building had to be an extensive, well-designed space to study, appreciate, and celebrate art.

“I told the staff when we were initially designing the new building, ‘I don’t ever want to move or break down another piece of furniture again. I want us to use spaces as they were intended,’” Purón says.

The RCA’s goal of rebuilding was brought to fruition with the Imagine Capital Campaign, which saw organizations like Rebuild Texas Fund, Still Water Foundation, H-E-B, and Reliant donating significant funds, along with a group of nearly 100 families, individuals, and organizations—collectively called The 50Rock! Society: Foundation Circle—which brought in nearly $1.4 million in donations alone. A $5 million economic development grant from the U.S. Economic Development Administration was also given to the center.

“The support that we received from Texas is unbelievable,” Purón says. “I’ve never lived in a more generous state, and I’m still humbled and get chills down my back when I think of how many people donated to this.”

On Dec. 11, the public finally got to see the results of all the work. Within the three collective spaces, visitors can now access hands-on classes and workshops, gallery exhibits, a creative space to host events, a gift shop, breathtaking sculptures, and other community-focused amenities.

So just how eager was the public to access the new and improved building upon its opening? Purón says that in the first two hours of opening, $18,000 worth of art was sold, an impressive haul for the organization.

He believes the response to the beautiful campus is a reflection of how important and invaluable art is—and will continue to be—to the community of Rockport and those who love it.

“The arts center for many, many years was a community gathering space, and we want to continue to show that art can be very democratic and accessible not just only to the one percent who can buy a $20,000 painting, but also to anyone who wants to become a member, an artist, or even a future patron,” he says. “Art is for everyone.”

The Rockport Center for the Arts has several current and upcoming exhibits, including The Big Wave!, its annual all-members exhibit, and a clay arts exhibit coming in February 2023.