For Bastrop Residents, Last Week’s Rolling Pines Fire Was Too Close for Comfort

Despite its smaller scale, the fire brought back memories of the 2011 Complex Fire in the Lost Pines 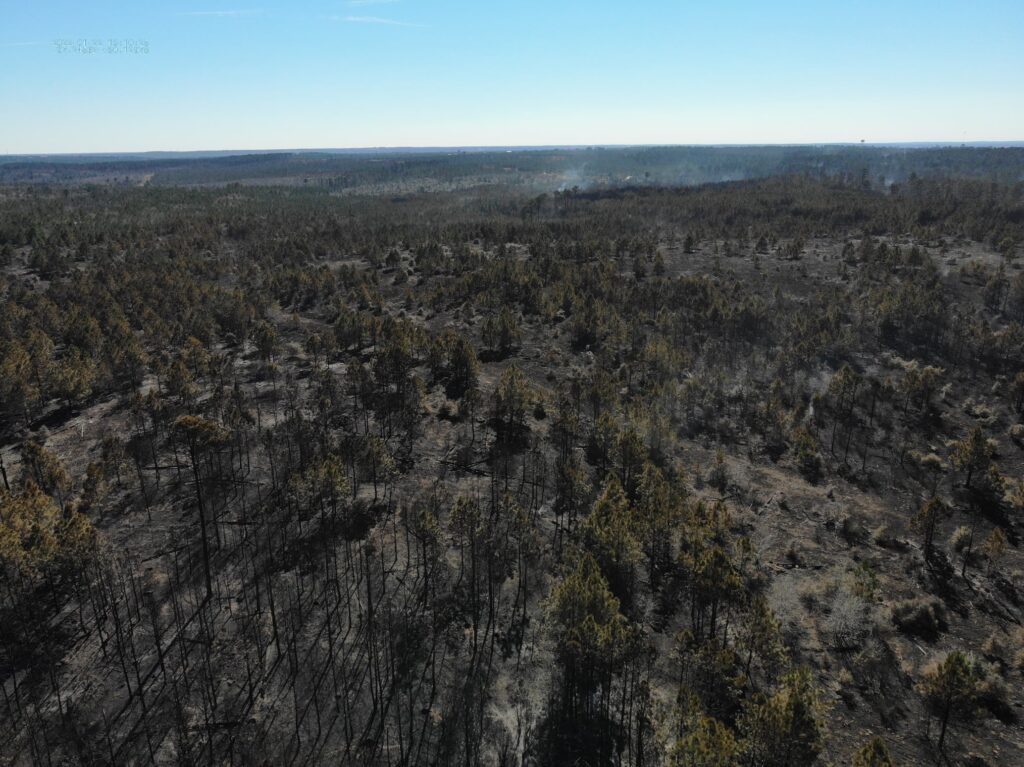 An aerial view of the area that was burned in the Rolling Pines fire in Bastrop State Park last week. Photo courtesy Texas A&M Forest Service.

The history of Bastrop County is marked by wildfires, the most devastating being the 2011 Complex Fire that burned 32,000 acres and lasted 55 days. So, when the Rolling Pines Fire sparked in Bastrop State Park last Tuesday, many longtime residents were not at all ready to relive the recent past.

“It’s a struggle to feel safe in the Piney Woods,” says Sonya Cote, chef and owner of Store House Market + Eatery located on Main Street. Because so many locals lost their homes during the Complex Fire, Cote says, “the trauma runs deep.”

Last week’s fire, which took place in a remote part of the state park along Power Plant Road and State Highway 21, burned an estimated 812 acres and prompted the evacuation of 250 homes. The exact cause of the wildfire is still under investigation, but it happened during a prescribed burn conducted by the Texas Parks and Wildlife Department, part of a routine practice meant to prevent large wildfires by eliminating dead leaves, branches, and hazardous fuels that could aggravate flames.

Kari Hines, Bastrop resident and public information officer at Texas A&M Forest Service, the state agency responsible for protecting Texas’ forests, says the agency has conducted 28 prescribed fires in the state park since 2014. “We work hard across the state and specifically in Bastrop to earn the trust of residents,” Hines says.

Hines emphasizes that national, state, and local officials and firefighters came together and coordinated efforts to contain the flames, and that even though they know prescribed burns are the most efficient way to prevent massive blazes like the Complex Fire, Texas Parks and Wildlife is working with other agencies on a facilitated learning analysis to find out exactly what happened.

On Tuesday, Texas Parks and Wildlife released a statement: “Our park staff are a part of the Bastrop community. Their families live in the community, work in the community, and their kids go to school in the community. We take our responsibility seriously to take care of the health of not only the ecosystem, but the community as well. As we work towards determining a cause for the spread of the fire, we will continue stewarding Bastrop State Park and ensuring the park is accessible for all Texans.” The statement went on to say there were no park closures, but visitors should check the department’s website for any updated information. (On Wednesday, the department announced it was temporarily suspending prescribed burns at Bastrop State Park and that it is forming an independent panel to review the circumstances behind the Rolling Pines fire.)

Because the burn happened in a remote part of Bastrop State Park, travel to and from the park hasn’t changed. No homes were destroyed, and the park and all roads leading in remain open, with no trails impacted by the fire.

Bastrop Mayor Connie Schroeder says there was no threat within the city limits. Businesses remained open in town, but the smoke on the horizon was “very emotional for our residents.”

Last week, County Judge Paul Pape issued a statement saying that he was asking for a “full accounting of what happened.”

For many residents, the park and the pines are what drew them to the area in the first place. Bastrop State Park is a source of pride for the community. They understand prescribed burns are necessary, but still, as Adena Lewis, Bastrop County’s director of tourism and economic development, says, “No one wants to relive 2011.”

For longtime residents like Lisa Piccandra, who studied forestry in college, the trees are a major reason she moved to the area. Her family settled into a rustic log cabin in the middle of the Lost Pines forest in 1996; it was lost in the Complex Fire. She says she’s been through “a million prescribed burns” since 2011, and she understands the need, but still, “it’s always a trigger.”

Since 2011, over 6 million seedlings have been planted in the area on public and private land to help repair the damage from the Complex Fire. Before last week’s blaze, “it was green, and pine trees were back,” says Piccandra. Now, within the 812 acres that burned, “they have to start over again.”

Government officials and first responders on the ground understand the frustration of residents. Hines of Texas A&M Forest Service says, “They’re dedicated to figuring out what happened so we can move forward and start gaining trust again.”