From Field of Dreams to Spooky Fall Events, Corn Mazes Are Cropping Up Across Texas

Whether tilled or planted, this fall favorite requires a lot of planning and some luck to be ready for the season 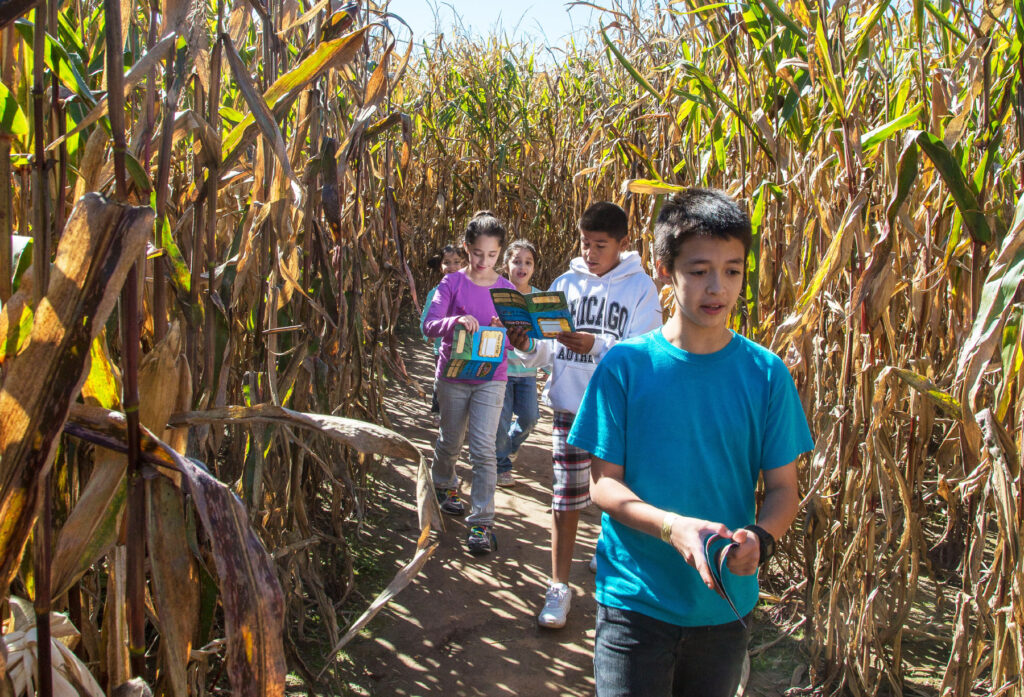 Along with ordering a pumpkin spice latte and visiting a pumpkin patch, making your way through a corn maze has become a quintessential fall activity. And October is prime corn maze time, especially at night when the vibe can reach Children of the Corn-level spookiness.

Across Texas, corn mazes are opening up this month, welcoming visitors into their winding pathways and dead-end confines. But as fun as they are, creating a corn maze is no easy task. It can take up to a year of planning, and, as is the case with any farming endeavor, they’re vulnerable to the weather.

At Circle N Maze in La Vernia, about 30 miles east of San Antonio, instead of following the yellow brick road, guests are told to follow a map to get to the end of this year’s Wizard of Oz-themed maze. Built on 80 acres, the 3.9-mile maze has 28 markers to guide people. Of course, not everyone wants the help.

“Lots of teenagers tend to just go in willy-nilly,” jokes owner Caylin Herley. “They might be locked in there to this day, there’s no telling,”

This is the fifth year that Herley and her husband, Drew, have hosted a corn maze on their 400-acre farm, which has been in Drew’s family for more than 100 years. Always looking for new business ventures, the couple got the notion from another farm in the area.

“With my husband’s farm background, we started thinking of agritourism and a corn maze sounded like a cool idea. We just went with it,” she says, adding that neither she nor her husband had ever visited a maze before they began hosting one on their farm.

To construct their mazes, the Herleys work with MazePlay, an Idaho-based company that designs and plants the seeds for mazes across the country. Traders Village in San Antonio and El Campo Lost Lagoon RV Resort, between Victoria and Houston, are also clients.

Farms, flea markets, and other businesses either select one of the company’s pre-designed mazes or they can come up their own idea. For example, Traders Village had MazePlay customize a maze for the flea market’s 10th anniversary, incorporating mascot Freddy the Flea into the design.

When planting season arrives, the company sends one of its mobile units, which has a tractor and precision planter, out to the location. Instead of tilling grown corn stalks, the precision planters plant seeds according to the design created with a proprietary CAD-based program [computer-aided design software allows designers to visually construct 2D and 3D forms]. That design is then referenced and mapped out in MazePlay’s computer system for planting.

“That planter is able to turn on or shut off each individual row depending on the GPS location it’s at,” says MazePlay designer and illustrator Chayce Whitworth, who worked with the Herleys on their design. “So it basically goes across the field more or less like a dot matrix printer, putting the seed exactly where it needs to go.”

When the corn grows, voila, you have a maze. Depending on how intricate the design, the size of the maze area, and the travel costs, the job can run from $2,600 to $6,000. For a maze like the Herleys, which covers 80 acres, the job to plant the seeds took about eight hours (as opposed to 12 to 15 hours if done by tilling). 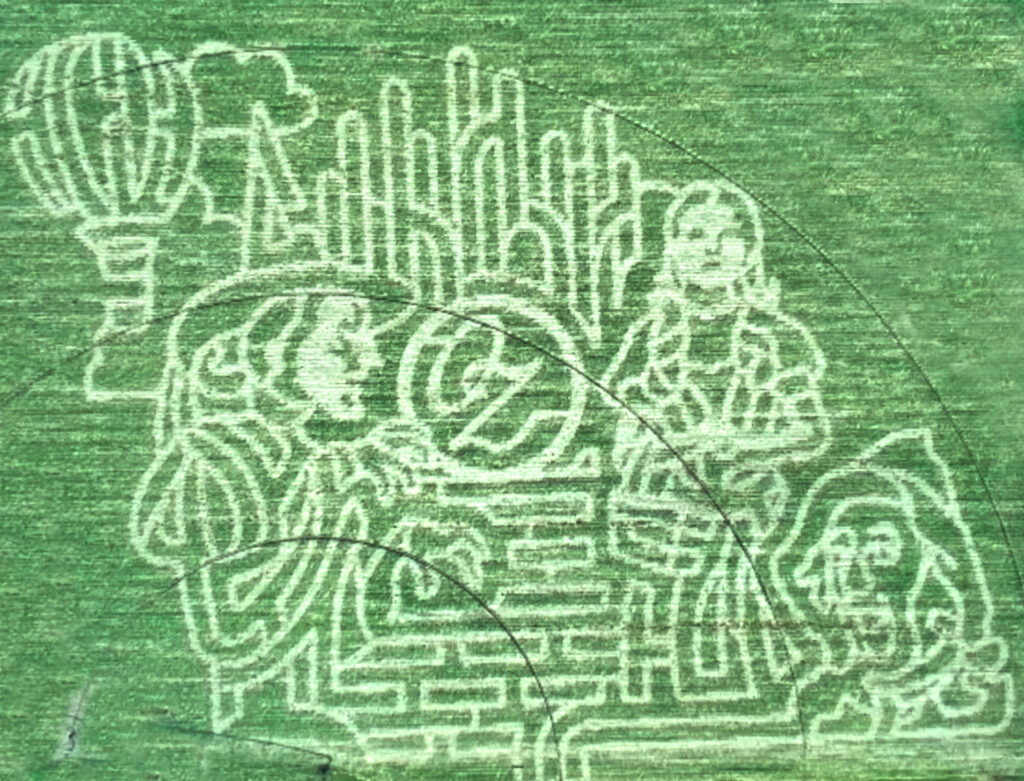 Over the years, Circle N Maze has had a sugar skull (a symbol of Día de Los Muertos), Daddy Shark (from the children’s song “Baby Shark”), a scarecrow, and a Texas-shaped maze. “We wrote ‘Texas Strong’ in it. It was right after Hurricane Harvey,” Herley says.

To ensure crops grow well, the Herleys buy climate- and soil-appropriate seeds from a farmer in South Texas. It usually takes about 60 to 90 days for the crops to grow, and this year planting took place the first week in August. There are approximately 30,000 stalks per acre, and the stalks grow to be 8 feet tall, which Herley says is the “proper height” for a maze.

“We tried a different breed once, which went to 13 feet, but those were hard to manage—they fell over a lot,” she says, adding stalks that are too tall can be intimidating. “It scared people a little.”

Things don’t always go according to plan. “[Mazes are] subject to weather, just like any type of farming—if it rains too much or too little, you can have crop failure,” Whitlock says. “That does happen sometimes.”

Such was the case with El Campo Lost Lagoon RV Resort’s maze this year, which is the first year the’ve built one. After the seeds were planted, a week of rain drowned the seeds and destroyed half the crop. Out of three areas, they were able to salvage one part. “In the beginning, when you first walk in, it’s perfect. But the further in you go, the stalks just get shorter,” says a spokesperson for Lost Lagoon. They continue to work on the maze and plan to have it open this weekend.

If heading to a maze for the first time, Herley suggests bringing water and wearing comfortable shoes and clothes, noting that “there’s no wind or breeze in the maze.”

It usually takes people at least an hour to get through the maze. (Whitlock says more “directionally challenged” individuals may take up to three hours.) For those who find themselves experiencing some claustrophobia or anxiety, a phone number is provided where you can call and have a maze worker come get you. Of course, it may take a while to get to you, depending on how far in you are.

Friday nights is when things get spooky. They turn away all the lights, so the maze is almost completely dark. People need flashlights to walk through the maze. But don’t expect anything to jump out at you.

“No, that’s a little too scary. That’s overkill,” Herley says. “Just nighttime is good enough for most people.”

Here are a few corn mazes around the state open this month.

Circle N Maze
La Vernia
Along with the Wizard of Oz maze, the farm offers a petting zoo, mini maze made out of hay bales, and a pumpkin patch. Theme events include a day when guests can bring their dogs and Friday “Lights Out” nights. Open Oct. 8-31; $10 for ages 3 and up.

South Texas Maize
Hondo
Located at Graff 7A Ranch in Hondo, this 7-acre maze celebrates its 21st year with a Country Music Texas Style theme. The maze can take up to 30 minutes to get through and they have nighttime hours, when guests can bring a flashlight or purchase a glow stick. There’s also a pumpkin patch until Oct. 31. Open weekends through Nov. 21; $18.50 a ticket.

Trader’s Village Corny Maze
San Antonio
The flea market’s 10-acre maze has three trails, ranging from an easy level for little kids to a more challenging level for adults. The family fun continues with a petting zoo, rides, concessions, and a cannon for shooting apples. Open weekends Oct. 9-Nov. 28; $9.99 for the maze only, $14.99 for maze and rides.

Sweet Eats Fruit Farm Fall Festival
Austin
With a Taylor Rodeo theme, this festival’s maze is 4.5 acres next to a 2-acre pumpkin patch. Among the activities are mutton busting, pig races, and wagon rides. Look for food trucks that offer a variety of food and beverages including turkey legs, kettle corn, and beer for grownups. Friday and Saturday nights have a fireworks show. Through November; tickets range from $16.95 to $21.95.

Family Fall Harvest
El Campo
This festive seasonal event at El Campo Lost Lagoon RV Resort offers a corn maze along with a whole slew of other activities—pedal cart races, pet costume and pumpkin-decorating contests, pumpkin bowling, and a pumpkin patch, to name a few. An abundance of rain damaged half of the crop, but there’s still plenty maze to get lost in. Weekends in October; $20-25 adults and $10 children.

The Maze at At’l Do Farms
Lubbock
Newly redone At’l Do Farms offers fall festivities such as a hayride to the pumpkin patch, a corn cannon (you get three attempts to hit the targets), a Fairy Tail Trail (a trail through the corn that’s better for tykes), and sunflower fields, but the main attraction is the Dirt to Soil-themed maze. Nov. 6; admission is $12.

Fall Season at Yesterland Farm
Canton
With its collection of vintage mechanical rides, a pumpkin house, Animal Town, and its 3-acre maze, you’ll want to add this farm in East Texas to your fall must-visit list. Weekends have a Spooktacular Nights, where the maze turns “creepy.” Through Nov. 7; admission starts at $21.95.