From the makers of 'The River and the Wall,' the film showcases the wildlife of West Texas and other parts of the state 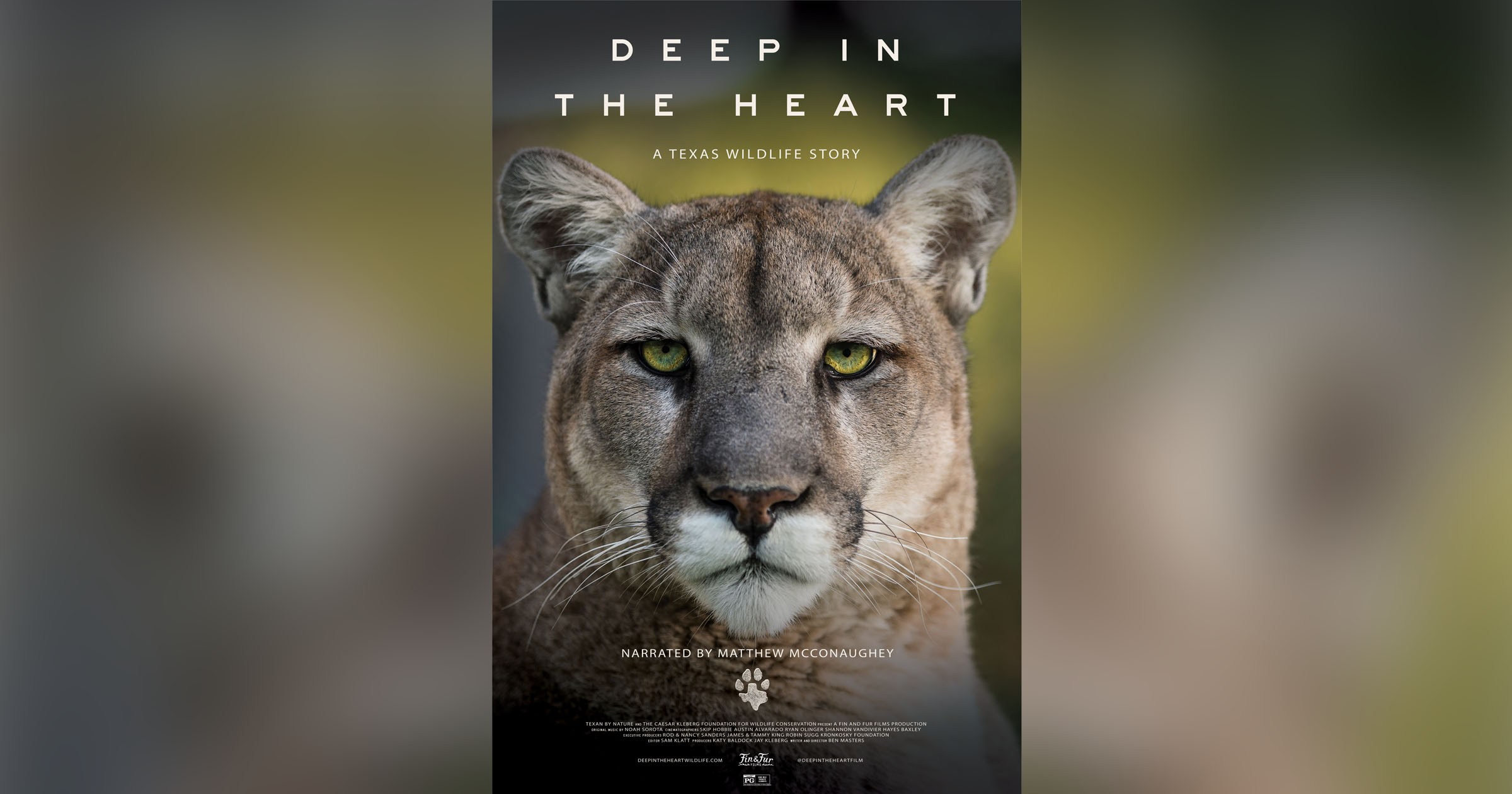 Made by the Emmy-nominated Fin and Fur Films and premiering June 3, Deep In the Heart is a gorgeous visual feast of Texas’ often unseen wildlife—black bears, ocelots, mountain lions, just to name a few—and the wild places they live. With McConaughey’s warm, familiar drawl as backdrop to stunning imagery of the state’s diverse ecosystems, this film will strike deep in the heart of anyone who loves the Lone Star State, and may even convert those who don’t.

The team at Fin and Fur, who released the award-winning 2019 documentary The River and the Wall, directed by Ben Masters, describe their work as being “dedicated to using film as a medium to give wildlife a fighting chance and advocate for the preservation of wild places.” For Deep in the Heart, they consulted with biologists for every sequence. With scientific guidance and a whole lot of patience, cinematographers Ryan Olinger and Austin Alvarado accessed rare close-ups of creatures like the West Texas mountain lion and black bear. The sequences of these elusive Texas beasts foraging, playing, and napping in their own habitat are so vividly filmed, you feel like you are in the wild with them.

Producer Katy Baldock, who along with seasoned Texas conservationist Jay Kleberg (who’s also the Democrat candidate for Texas Land Commissioner), says that they decided to make this film to show people the full diversity and beauty of Texas’ natural world. “There are a lot of misconceptions about Texas—that it’s all flat or all a desert,” Baldock says. “But really it’s such a diverse state with so many different ecosystems and incredible, unique wildlife stories, and we just wanted to show people what’s here.”

The film also highlights the threats the wildlife and ecosystems face, and what is being done to try to overcome them. “Whether it’s from development or changing climate, there are a lot of challenges that we face when it comes to conservation,” Baldock says. “And at the same time, these ecosystems can be really resilient when given the opportunity to grow back and return. And so while we have a lot of work to do, the film also shows how there’s also a lot of room for hope and success stories.”

One success story the film follows is that of the black bear, a population that disappeared from Texas in the mid-1900s. According to the film, many wildlife species that have recovered in Texas over the last couple of decades, like the bighorn sheep and pronghorn, have involved human intervention and translocations—moving them to a protected area. In the documentary, we see how black bears recovered with little to no human intervention.

Deep in the Heart is both engrossing and educational—and likely to be a hit with Texas students. Fin and Fur makes it easy to adapt the film for classroom learning; later this summer, their website will feature a free curriculum for teachers and parents to facilitate further learning and discussion. The website and film credits also share information on the most effective conservation organizations currently working to sustain the animals and ecosystems that delight viewers throughout the film. With their conservation efforts, there is hope that the natural treasures of the Lone Star State will continue to thrive, deep in the heart of Texas, for future generations of Texans to admire, too.

Deep in the Heart premieres in theaters across Texas on June 3. See full list here.