The former "mayor" of Gruene would have turned 100 on June 23, the day that has become synonymous with 'Frank's Tranquilizer Hour.' 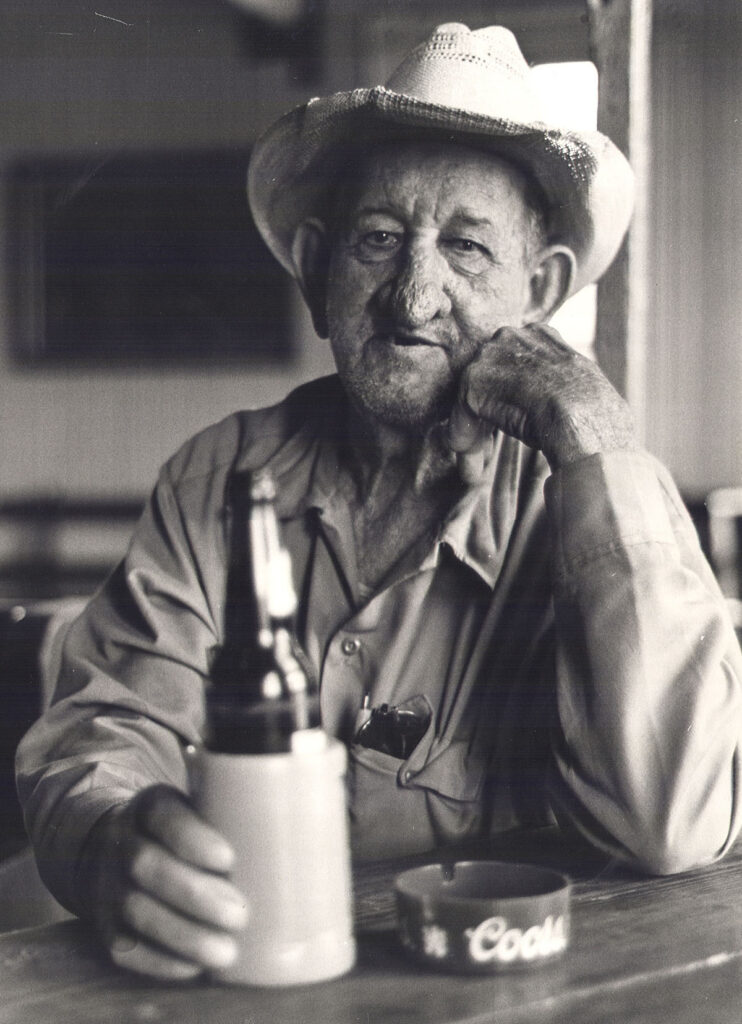 As Hondo Crouch was to Luckenbach, and beer-drinking goat Clay Henry was to Terlingua, so was Frank Schlather to Gruene. To successfully resurrect a ghost town, it seems you need more than a dream, money, and dedication: you also need a local character to function as unofficial mayor.

When Pat Molak bought Gruene Hall in 1975, little did he know such a legendary figure came attached to the purchase. Schlather was a saddle tree maker who lived in the pink Victorian house that still stands across from the oldest dance hall in Texas. Then in his early 50s, Schlather looked every bit the character he was, attired in faded jeans, a khaki shirt, boots, and a crunched-up straw hat atop twinkle-eyed visage. Though not a conventionally handsome man, Schlather had what my grandfather, a painter in his spare time, called “a good face.”

Nalley says that thanks to an arrangement with the previous owner, Schlather had a key to the premises and a position as a sort of supervisor of janitorial services. “The janitor came super early every day, and Frank was the unofficial official opener of the hall,” Nalley says.

It was more of a barter economy-type position, as Schlather’s compensation came in the form of what he called “Tranquilizers”—longneck bottles of Falstaff beer. As if playing the role of Shakespeare’s lovable, bulbous-nosed antihero that bears the same name as the beer, Schlather relished his compensation. “Sometimes Frank would indulge a little too much and when Pat would come in later in the day, he would find Frank asleep on one of the pool tables,” Nalley says, laughing.

Nalley remembers that Schlather was seldom too tranquilized to dance. “Oh my gosh, he would just get out on the floor and cut a rug all by himself,” she says. “He’d attract all the college girls because they just thought he was so cool and fun. It was interesting that he liked to be on his feet as much as he did because he was bow-legged.”

Nalley also recalls that Schlather didn’t play favorites with the bands that came through, but the more prominent the fiddle, the more his dancing feet would fly.

You know how it goes: Some people are downers, suckers of life out of any room they enter. Schlather was the polar opposite, a bringer of joy and pure kindness. “If Pat or any one of the employees or regular customers were feeling down about something, Frank would always have a kind word of cheer and encouragement and even a hug sometimes,” Nalley wrote on the Gruene Hall website. “So I guess you could say he also acted as the on-site hall counselor occasionally. His big heart of gold and beautiful aura made up for any lack he may have had in the looks department.”

And so, every year since Schlather’s passing in 1993, Gruene Hall remembers the town’s unofficial mayor with “Frank’s Tranquilizer Hour.” Taking place June 23 (his birthday), this year’s celebration of his life takes place on what would have been his 100th birthday. From noon to 2 p.m., you can enjoy Tranquilizers at a price of just 50 cents more than the man himself paid for a beer (that is, nothing…ever). And if you wear an original Frank Schlather T-shirt “from the old days,” that budget-friendly beer-drinking is extended until 4 pm. The more you drink, the more you save.