Is Luckenbach, Texas, the Center of the Universe?

Author and artist Becky Crouch Patterson is touring the state to promote her third book, which is all about the town where everybody's somebody 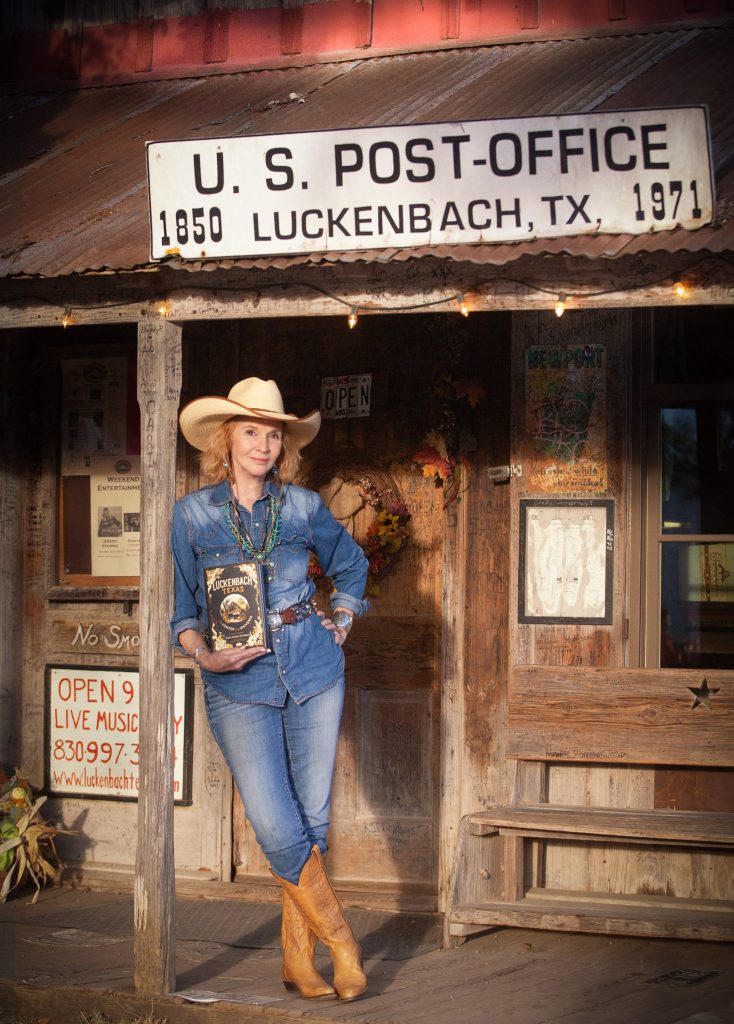 Author and artist Becky Crouch Patterson, in the middle of a statewide tour to promote her third book, Luckenbach, Texas–The Center of the Universe, grew up with a front-row seat on the never-ending performance of one of the most entertaining characters in Texas.

Patterson’s father, the humorist and musician Hondo Crouch, loved his native state so much he even bought his own town—the mythical-but-very-real Gillespie County hamlet of Luckenbach—and he built it into the famous place where everybody’s somebody.

Hondo’s business card identified his profession as “imagineer,” Patterson recalls. “He was a hobo cowboy whose stage was any street corner or oat field,” she wrote in her 1979 book, Hondo, My Father. “People loved his weathered looks, his faded cowboy garb. His twinkly blue eyes, pixie-like youthfulness, and keen wit captivated all.”

Though Hondo died in 1976, his spirit still sprinkles tiny Luckenbach, population 3, with funny-bone magic. In her new book, Patterson chronicles the rustic glamor of her papa’s moonbeam metropolis when he owned the town in the ’70s, as well as its German-Texas history of intellectual creativity and pre-Civil War era of the 1850s. She’s scheduled to discuss Luckenbach Feb. 27 in Dallas, Feb. 28 in Fort Worth, March 5 in Houston, and April 24 in Austin.

What the heck was in that Hill Country water that possessed your daddy to buy a whole town?

He bought it with [actor] Guich Koock. Guich had been a family friend ever since he worked with Hondo at Camp Longhorn on Inks Lake. His family had held reunions at Luckenbach, so it was already special for him, and it had long been a favorite beer-drinking spot for Hondo. They bought the town for $29,000 from Benno Engel, a relative of town namesake Albert Luckenbach. It came with the combination post office, general store, and beer joint and also with the historic dance hall and a pickup truck. When my parents first entered the store after buying the town, it still had antique goods like patent medicines and posters advertising “Ma Ferguson for Governor” and an 1863 call to arms for “Citizens of Germantown” to fight for the Union.

I read that when Hondo first bought the town, a reporter asked him what he planned to do with it. And he replied, “Nothin’. We’re gonna have dances and eventually a place to eat, and we’re thinkin’ of even having a restroom, although that’s in the planning stages.” How did y’all go about reinventing an 1849 semi-ghost town?

Well, Mama [Shatzie Crouch, daughter of rancher Adolf Stieler, crowned 1941 “Goat King of the World” by Life magazine] liked the idea of selling fresh produce, and Guich saw it as kind of a living museum. But when the government closed the post office in 1971, fewer people came to the store. And that’s when Hondo really began to ‘imagineer.’ That fall, we had the inaugural Susan B. Anthony Memorial Chili Cook-off, where we teased the other cookoffs that barred female contestants. Two summers later, Hondo wore a top hat and a buffalo robe to officiate the first Luckenbach Great World’s Fair, where 10,000 people saw everything from charro performances to Kiowa dancers. Then in 1976, some 50,000 showed up for the Non-Buy Centennial celebration, which poked fun at the commercialization of the country’s bicentennial.

That sounds like more fun that the law allows. What’s the difference between Luckenbach back in the day and nowadays?

Not much, really; that’s the best part. Somebody did steal our only parking meter. And we do have modern restrooms. But it’s still a shrine for Texas music. We still have a picker’s circle—Ryan Bingham used to play music in the circle for free before he became a star. We recently had the 44th annual Gary P. Nunn Hug-In, where people camped out and then came to the dance. Luckenbach was the first place where Gary P. ever played the Austin City Limits theme song, London Homesick Blues. More than anything, though, people say when they come to Luckenbach and get “back to the basics,” as the Willie and Waylon song says, they feel a great sense of freedom and independence. After all, our town was founded by Germans known as the Freethinkers. It’s just like Hondo always said, “Everybody is somebody in Luckenbach.”