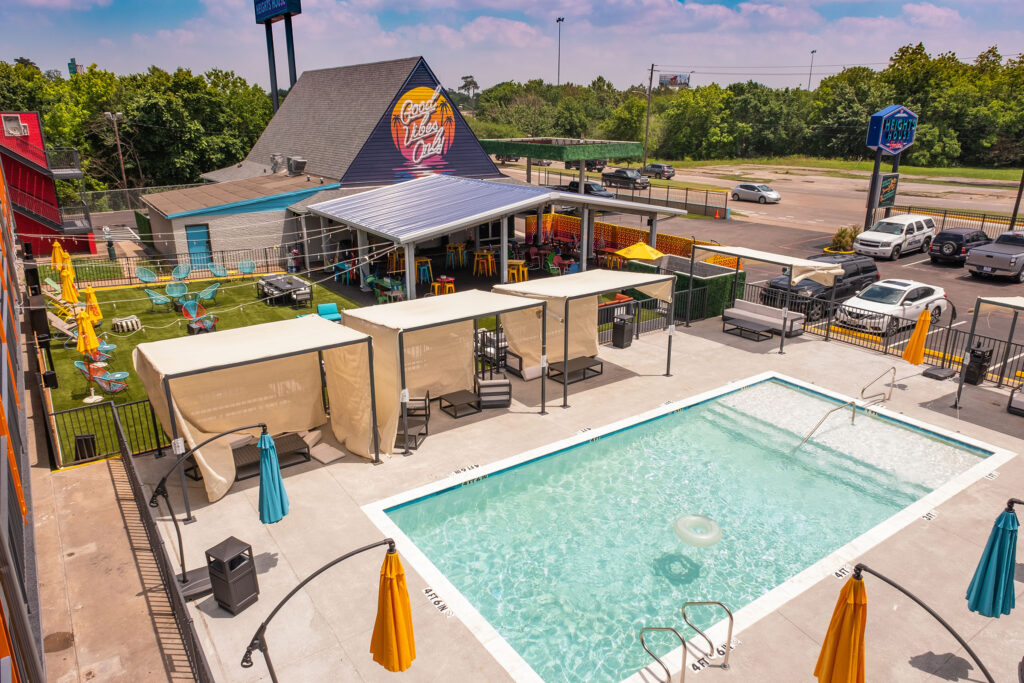 On a sweaty May evening in a historic-turned-hip neighborhood of Houston, hotel guests and local revelers lounge and sip cocktails poolside as UB40’s “Red Red Wine” spins in the background. It’s the kind of setting you’d expect to find in Austin at the Hotel San José or Austin Motel or in Dallas at the Belmont. But unlike those cities, Houston has lacked a modernized, retro-cool vintage motel, the kind of centralized hostelry that offers a funky bohemian feel with appeal for travelers and staycationers alike—until now, that is.

The old run-down Astro Inn on the eastern edge of the greater Houston Heights area has been reborn as the Heights House Hotel, complete with the poolside Space Cowboy Lounge. Partners Jivar Foty and George Giannukos invested one year and $3.5 million on the transformation of the 132-room hotel that officially opened in December.

It’s hard to miss the hotel as you exit Interstate 45: its three-story wall facing West Cavalcade Street is dominated by a mural of a Marilyn Monroe-like beauty painted by artists from Monterrey, Mexico, and a sign admonishes visitors that only “good vibes” are allowed on the premises. Painted in the boldest shades of cornsilk, orange, and fuchsia, the lounge area encourages said good vibrations, as does the DJ and the South Seas-tinged cocktail and food menu from Space Cowboy’s Hawaii-bred chef Lyle Bento.

It’s come a long way from its first incarnation as a Days Inn way back when and its long limbo as the Astro Inn. “The little hotel with the big heart” is how it was described to me by Marlene Shunnarah, the Heights House “social director.” That’s right—this motel has a Julie from The Love Boat, a roving ambassador who tries to ensure each guest is having a good time at all times.

“We envision this as a center for the community and a lifestyle property,” says Giannukos, who was serving as the poolside DJ on the night of my stay at the hotel. When he and Foty purchased the property, they toyed with the idea of affiliating with a national chain, but ultimately decided against it.

“We just thought it would limit us,” he says, before asking, rhetorically, if a chain would allow them to set aside Sundays for yoga on their courtyard lawn. What about designated rooms for karaoke or vintage arcade games? Possibly, he allows, but each of those decisions would not be theirs to make alone. “And, so, with all of those things that we wanted to do, we decided it would be best to be independent.”

Giannukos admits that inspiration came from Austin/Marfa/San Antonio Bunkhouse Group, founded by Liz Lambert in 2006, as well as motels in Portland, Oregon, and on Pinterest. He also drew from his family’s past: Some of the décor is inspired by his grandfather’s 1940s Houston motel.

“A lot of people are happy and amazed at what we’ve been able to do,” he says. “It’s a great location—just a few minutes from downtown.”

And the immediate surroundings are no slouch either. Smack in the heart of the Brooke Smith section of the greater Houston Heights, it’s easy walking distance to incredible taquerías La Chingada Tacos & Tequila, with its memorable mural of a Cheeto-chomping grackle, and a somewhat neglected outpost of the Laredo Taquería mini-chain. (People wait in long lines at the Washington Avenue location for the same breakfast and lunch tacos you can get in a flash on Cavalcade a few blocks east of the hotel.) You are also close to some of the state’s best Thai/Lao fare at Asia Market, and last but not least, the newly overhauled Houston Farmers Market.

Late nights, you’ll want to chill by the pool and sample some of Bento’s Space Cowboy creations: Maui short ribs with a macaroni salad (a staple of the Hawaiian “plate lunch”) or the Boom Boom Burger, incredibly tender and zesty with an eponymous sauce. And the cocktail menu has something for everybody: suffice to say it’s heavy on tropical fruits and rum, but not in a cliched tiki-bar way.

Older readers might recall Houston’s late, lamented Allen Park Inn. A casualty of Tropical Storm Allison, the Allen Park Inn and its Nashville Room Restaurant and API Bar were Houston’s home away from home for traveling musicians and other entertainers. Houston news icon Marvin Zindler was once an afternoon regular at the bar; Bill Murray was another fan. Willie Nelson and Townes Van Zandt stayed there; as did actor Jeff Daniels—ensconced there during the filming of Terms of Endearment while his co-stars were at the much fancier Ritz-Carlton. Daniels, who doubles as a musician, wrote a bitterly humorous song about his stint there. Musicians lacking a Hollywood ego loved the place, though, and its absence has left a hole in Houston’s soul for touring bands ever since. Perhaps the Heights House can fill that void. It is a much less fraught place than the one Daniels describes in his song.

“We want to be the funky place where the artists, musicians, and film people want to stay,” says Giannukos, who told me he’d never heard of the Allen Park Inn. To that end, they’ve lined some of the corridors with silhouettes of icons like Madonna and Prince. They’ve also entered into a brass tacks deal with the nearby concert venue White Oak Music Hall, where artists stay free and concertgoers get a discount on the rooms that have an average price of around $100/night. (A tip from Shunnarah, the motel’s social director: if you are not there to party until the wee hours, ask for a room on the back side of the motel, where you can’t hear the DJ or the Space Cowboy poolside revelers.)

“If you stay here, you might meet your favorite band,” says Giannukos.

Or maybe not. But you will have a good time, either way.