What does the creator of hip El Cosmico and Hotel San Jose like in a hotel? 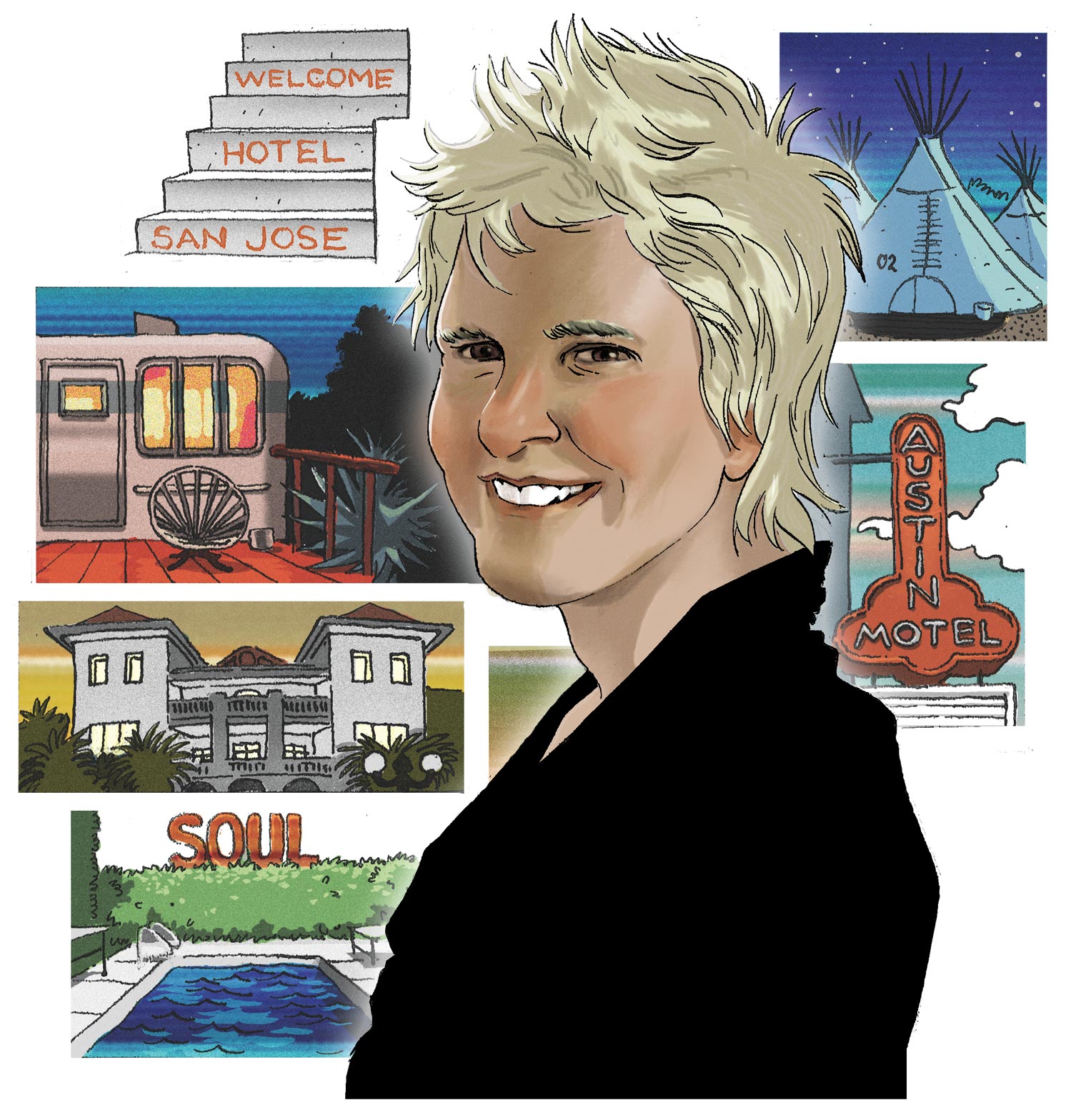 Penny the Chihuahua greets visitors with an inspection sniff outside the elevator leading to Bunkhouse, the Austin-based hospitality company owned by Odessa native Liz Lambert. From the third-floor workspace, windows overlook South Congress Avenue, home to Lambert’s Hotel San José and Jo’s Coffee. Lambert opened both establishments roughly 20 years ago, transforming this once-seedy thoroughfare into a hot spot for tourists and locals alike.

“Our approach thus far is opening hotels that matter, that become part of the fabric of the neighborhood.”

Ephemera tacked on Lambert’s office wall documents her story. There’s an early sketch of El Cosmico, the trailer and teepee grounds in Marfa that she opened in 2009. There’s a thank-you note from New York Times columnist Maureen Dowd after a stay at San José. There’s also a composite illustration of a sensuous woman rendered in a psychedelic swirl. “This is a spirit image for the Magdalena,” Lambert says.

The Magdalena, a 95-room hotel scheduled to open in late 2019 a block off South Congress, is Lambert’s latest offering in a portfolio that extends beyond Texas. The list includes the Austin Motel and Hotel Saint Cecilia in Austin, Hotel Havana in San Antonio, Phoenix Hotel in San Francisco, and Hotel San Cristóbal in Baja California, Mexico.

Lambert’s properties are known for being anti-cookie cutter. Her artistic flair and calculated approach to the guest experience are known to attract the cultural elite. Houston natives Beyoncé and her sister Solange Knowles famously stayed in one of El Cosmico’s restored Spartan trailers in 2012, posting glamorous images along the way.

In some cases these encounters have led to lasting friendships—whether with actress Connie Britton, whom Lambert trades stories with about Odessa and Friday Night Lights, or musician and actress Carrie Brownstein, who officiated Lambert’s wedding. That’s the life of the hostess with the mostest.

Q: How did you get into the hotel business?
A: I used to be a lawyer. From the University of Texas law school I went to New York, where I was a trial lawyer in the district attorney’s office. In the mid ’90s, after a couple years there, I came back to Austin. Then I worked at the attorney general’s office here, but I decided that I wanted to do something different. I would hang out at the Continental Club, and there was a little motel across the street—the San José Motel at the time. At that point it was seafoam green and probably hadn’t had a renovation since the early ’70s. I finally worked up my courage one day to ask the owners if they would ever be interested in selling it—kind of on a whim. And it just happened serendipitously that they were about to put it in the newspaper for sale.

Q: What was your vision?
A: I was just going to redo the rooms and keep going on about my business. But it turned out there was no way to attract people who wanted to stay in a cheap motel because those people were all along the highway, at the Motel 6 and stuff. And so to do a cheap renovation room by room was tough because the kind of clientele that we had at the time were people who were down on their luck, or people who were living outside of the law a little bit. I realized I had to shut the doors and do a bigger renovation to reset everything. It was a lot more than I had initially thought I was going to do, so I was almost an accidental motelier.

Q: What’s your hospitality philosophy?
A: Our approach thus far is opening hotels that matter, that become part of the fabric of the neighborhood. Something that the locals like as much as a traveler would. Something that’s not trendy, or that doesn’t need to be redone and reimagined every few years, but something that becomes more interesting the longer it is in a place—and the more layers that accrue. So, I guess it’s to build meaningful places. I’m from West Texas, and to me a hotel was always part of the community. My granddad was a rancher, so he did a lot of his business in hotel lobbies.

Q: What was it like growing up in Odessa?
A: I lived through that oil boom in the ’80s. I grew up in the world of Pop Warner football and malls and driving the car around on a Friday night and going to the Taco Villa and, you know, the Permian Panthers.

Q: Where did you get the idea for El Cosmico?
A: It was a business model that allowed us to expand and contract. So, if there were a thousand people in town, they could all stay there if they wanted because they could camp. And then if nobody was in town, you could contract a bit. It can adjust to what the town needs because it can be either super busy or crickets. I also realized one of the magical things about being in Marfa, in Far West Texas in general, was being out under the night sky and the stars.

Q: Why is Marfa a cool place to visit?
A: It has great bones of beautiful bungalow houses. It’s temperate. It’s the high desert. Cool nights in the heat of Texas. I think a lot of people are drawn to kind of the myth of the American West. We have Giant. So I think it’s all of those things. I think you probably wouldn’t have Marfa the way it is today if it weren’t for Donald Judd, the artist. He was a big influence on so much—where art and architecture and design all come together.

Q: There’s always someone taking a selfie with the “I love you so much” mural at Jo’s Coffee. What’s the story behind it?
A: An ex-girlfriend of mine painted it. It came about because we were in a fight. I was having lunch down the street, and she came by in broad daylight and just tagged the building. I didn’t notice it until the next day when I was coming down Congress. Our head of maintenance called me and said, “Don’t worry; we’re just about to get this.” And I’m like, “No, leave it for the day. Just leave it for a couple of days because it’s such a nice message.” And then it took on a life of its own. I swear you can’t drive by that corner without somebody taking a picture. People have gotten married underneath it.

Q: Are you concerned that the new Magdalena Hotel will contribute to overdevelopment on South Congress?
A: The fact that South Congress has become such a desirable place to shop or eat or drink means inevitably that rents are going up. And so that means that all the charming things that made South Congress great, funky, and bohemian—all of those small businesses are in the fight for their lives to be able to pay rents. Rents are becoming so expensive in this town that some of the very people who make this an incredible place to live are being priced out of living in Austin. It’s heartbreaking because it’s changing the fabric of the place. But look, you can’t stop change. You can try to influence it. I changed the San José, and a lot of people told me at the time, you’re going to displace all these folks living there. And that was true. I tried to do it the best way I could.

Q: What are some hotels outside of your own that you adore?
A: We took a trip a few years ago to two places that I really love on the Amalfi Coast—a hotel called Il San Pietro from the 1970s and one called Le Sirenuse from the 1950s. They’re the kind of places that have just been layered and layered upon, and it’s a moment in time. I want to see everything [New York hotelier] Sean MacPherson does right when it opens. I love his eye for detail and his thoughtfulness of lobbies.

Q: When you book a trip, what’s on your checklist for a hotel?
A: I am impossible. There are so many things I want—room service for the most part. I want a place that’s interesting. It has to be thoughtful—somebody has thought about the bed I am sleeping in and whether I can get a decent cup of coffee in the morning. That can go from 2-star to 5-star. It does not have to be expensive or have been around a long time. It’s the location, and it’s the point of view of the place as well. My wife thinks I’m a terrible person to travel with in some regards because I can’t stop. I can’t turn the OCD off. I’m a critic, for sure, but I’m also a huge fan.