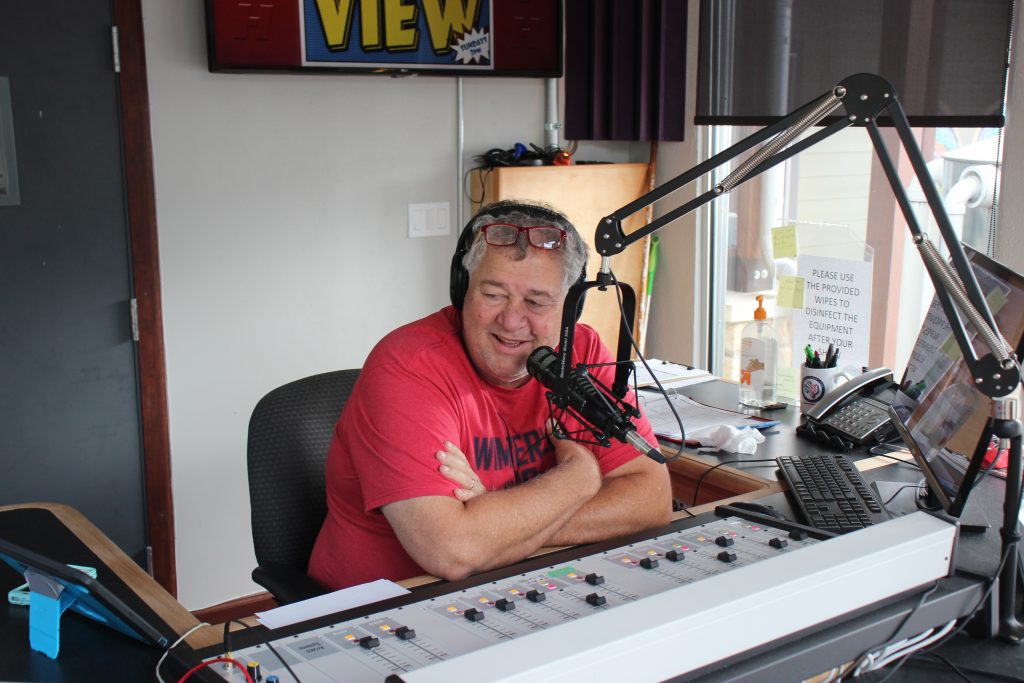 Community radio was made for times like these. Not-for-profit and listener-supported public radio stations exist to provide critical information in times of emergency as well as to entertain. During the COVID-19 pandemic, two Texas stations are living up to that mission statement.

Wimberley’s KWVH went on the air in June 2015, a week after a Memorial Day flood wreaked havoc through the valley. Station founder Susan Raybuck led a campaign for the approval of a low-power FM signal, which extends about 8 miles from town, citing the dearth of local information during disasters such as floods and fires. Although the hamlet of about 5,000 residents straddles two major media markets—San Antonio and Austin—radio, TV, and newspapers rarely cover Wimberley’s affairs.

Marfa has half the population of Wimberley, but its KRTS station covers a much larger geographic area as the flagship of five separate frequencies sprawling 250 miles from Presidio to Odessa. KRTS went on the air in 2007 as the smallest National Public Radio affiliate in the lower 48 states.

KWVH expanded its hourlong live morning show The Breakfast Taco Grande to three hours (then back to two hours in mid-April) and presented a five-minute COVID-19 update on Hays County at the top of every hour, according to engineer Brach Thomas.

“We bring in the numbers for the county, which includes infected, positive tests, negative tests, and deaths. One of the things people forget is the gas pump at the gas station—a lot of people touch that, make sure you put a glove on. We suggested taking a plastic bag with you, having a bunch in the car, so you could use that. Inform and forewarn—that’s the station mission.

Thomas is one of three paid employees at the station, assisted by 40 active volunteers. “It’s stressful. I’m here 45-50 hours a week. My phone is hooked up to the station’s text messaging, so if our stream goes down, I get a text message,” he says. “Honestly, it’s a responsibility I take very seriously. I don’t say this lightly, but this is one of the most important things I’ve done in my life. I’m very proud of manning a radio station during a pandemic. It’s something these people need and I want to be a helper, helping the community.”

Mike Crusham, president and general manager of Wimberley Valley Radio, says letting listeners tell their stories is crucial. “We’ve tried to adapt our programming to put people on the air that are hurting, expose what they’re hurting about, and see if we can help them,” he explains. “How do we help nonprofits during this time? We know that the restaurant business and the live entertainment business is really tough, how do we help these people stay on in some way, shape, or form?”

In her 10 years working in community radio in Alaska, Maine, and Texas, Elise Pepple, the general manager of Marfa Public Radio, says she’s never experienced anything like this. “When the pandemic started, I was on a [National Public Radio] webinar that recommended only essential staff be at your station,” she says. “And I thought, For us, that’s everyone.” Eight salaried employees are supplemented by more than 20 volunteers.

“The fundamental thing with radio is it takes being there in person,” Pepple says. “With the pandemic, it’s a design challenge. How do you make programming happen for the health and safety of everyone involved—staff, DJs, community members? We need people to work from home.”

That was her message to 19 DJs and new engineer Jacob Rockey during a staff Zoom meeting in late June. The broadcast studio, located in a converted filling station on East San Antonio Street, would remain closed through Labor Day, at least. Rockey is the only person authorized to go inside to load programming. DJs discussed various ways to produce shows at home using software like GarageBand and Audible and plug-in microphones.

The station’s public service announcements have included simple tips for handwashing and where to get tested. “This week, we decided to refresh those messages because there’s a lot of fatigue out there right now,” Pepple says. “This is why we exist, this is our mission: to serve West Texans with the information they need, and hopefully, provide a little joy along the way.”

Six months into the virus, listener support for Wimberley Valley Radio and Marfa Public Radio remains steady. “The amount of money we’ve raised to keep the station on the air has not really taken a downtick,” Crusham of Wimberley Valley Radio notes. Marfa has benefited from emergency funds from the Corporation for Public Broadcasting.

“Unfortunately, the coronavirus has been a wonderful opportunity for radio to do what it was intended to do back all the way to 1922 when people were first getting broadcast licenses,”  Crusham says. “It’s still a viable medium where you can help people.”

In case of emergency, turn your radio on.