Through a pilot program, kayakers can paddle previously off-limits parts of the San Antonio River 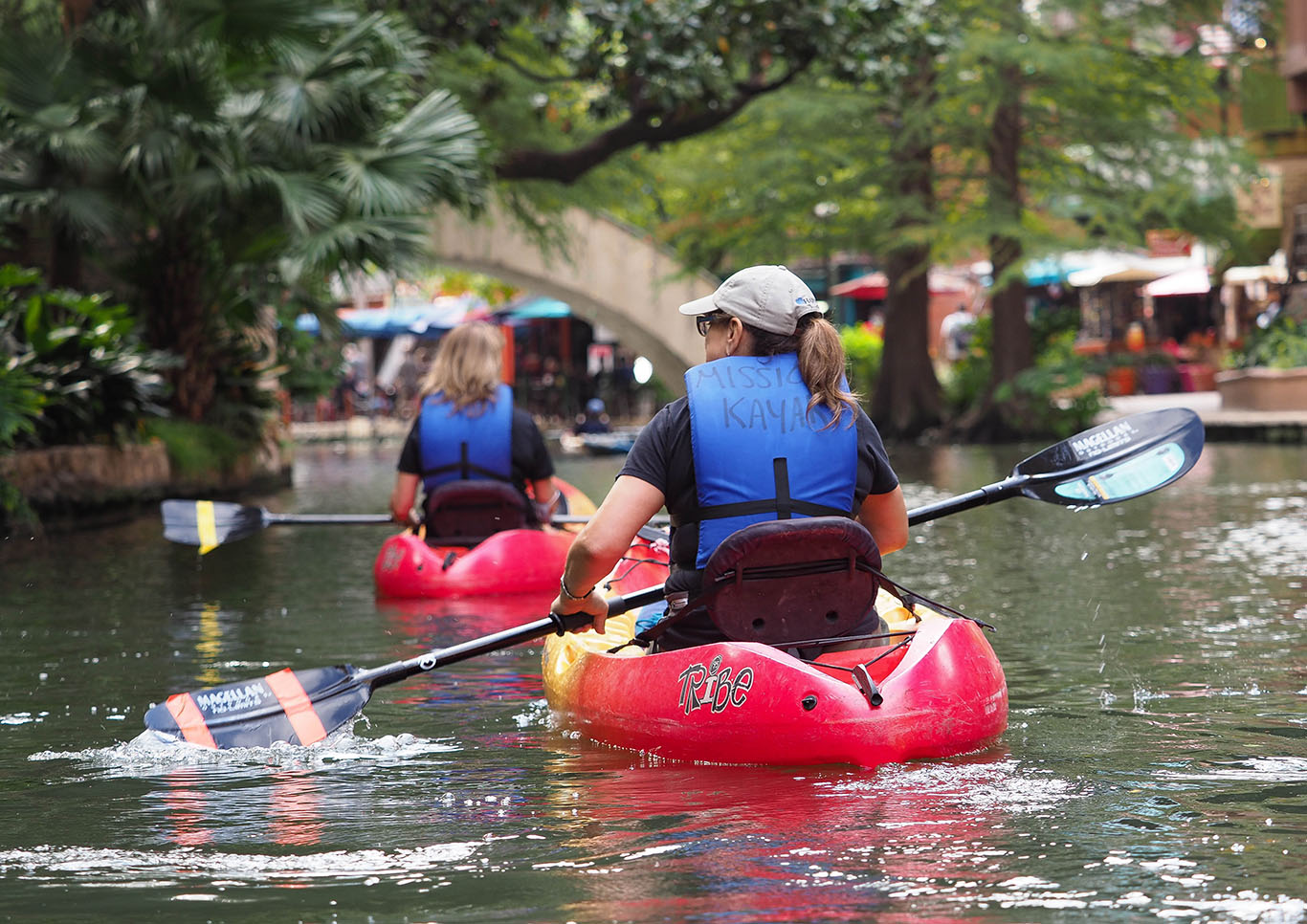 Kayakers paddle a part of the River Walk usually reserved only for boats.

Until recently, I’d only explored the San Antonio River Walk by foot, strolling over its arching bridges and beneath its canopy of trees as it winds alongside an urban waterway. That changed last Sunday morning when I pushed my yellow plastic kayak into the shallow waters of the San Antonio River and paddled my way through the famous Texas tourist destination.

I spent about two hours on the water, making two leisurely circuits of the famous horseshoe, where pedestrians walk amid hotels, bars, and restaurants. I glided past Casa Rio, the popular spot for visitors to eat enchiladas and sip margaritas since 1946; watched a mama duck herd her string of bobbing ducklings past a gleaming hotel; and stopped to chat with Mayor Ron Nirenberg, who was out for a test paddle on the cool, clear morning. (“Love it,” he said.)

The experience was part of a pilot program by Mission Kayak, which rents kayaks, leads guided tours, and offers instruction on the Mission Reach stretch of the San Antonio River and at Espada Park. 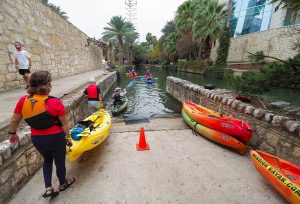 Tour attendees drop their kayaks in the water at the boat ramp on the San Antonio Riverwalk.

This part of the River Walk has been off-limits to paddlers since the early 1980s. Mission Kayak owner Sarah Neal worked with the San Antonio River Walk Association to get access for six weekend mornings this October and November. Now she’s working with city officials to extend the experiment—either on a special-occasion basis or as a continuing program.

My husband and I made reservations in advance, brought our own kayaks, and paid $15 to launch near Auditorium Circle and Fourth Street, where the company had set up a check-in point. Customers can also rent boats for $50. We were allowed to paddle between 8 and 11:15 a.m., before tourist barge traffic began. (Because of the pandemic, barges are operating on a limited schedule.)

“It’s a totally different perspective,” Neal says. “Everything just looks larger than life, because you’re sitting 4 feet lower and on the water. It’s an intimate way to see the city. You can feel the water each time you take a paddle stroke or someone goes by you.” 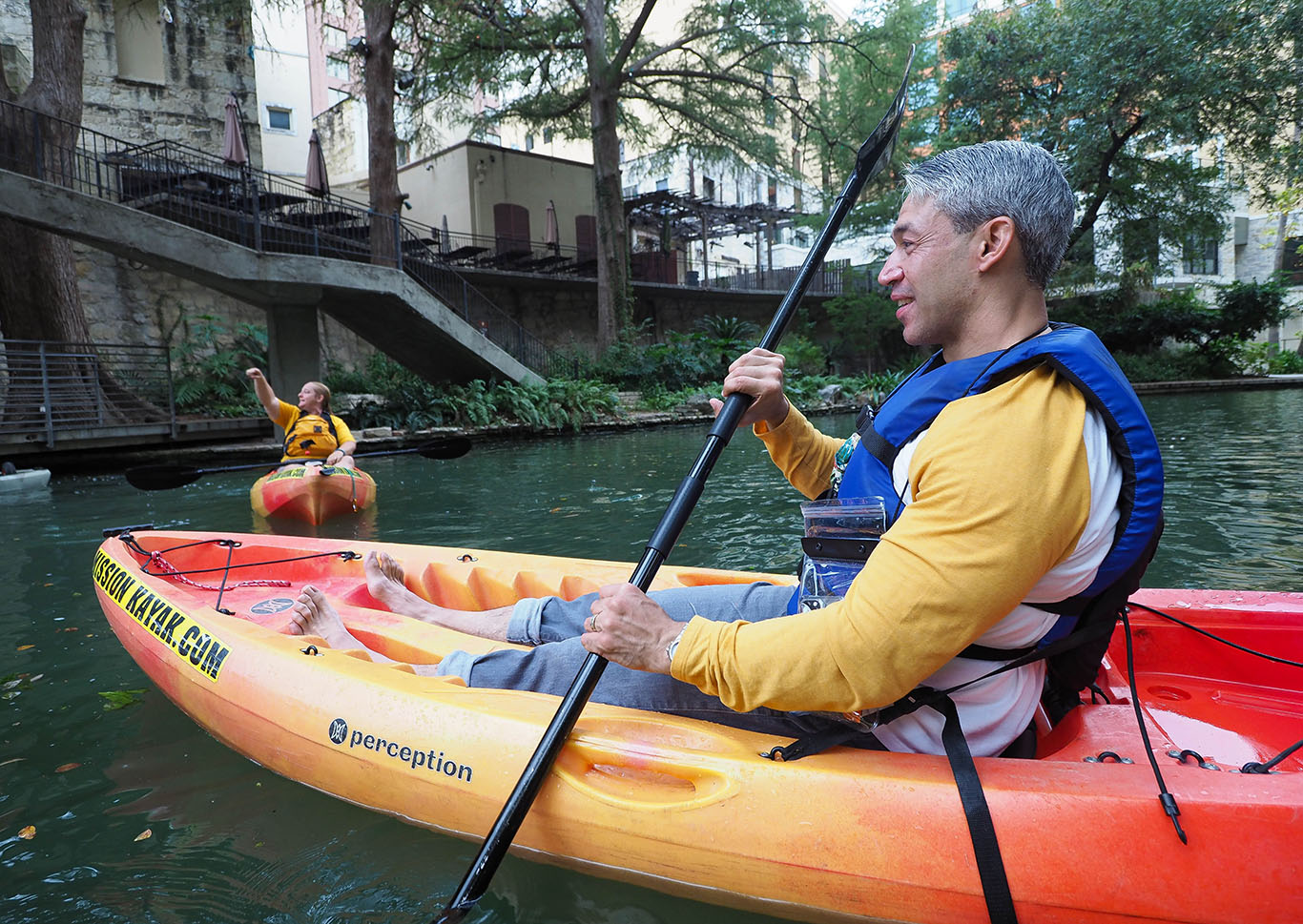 Paddlers must wear a life jacket, and stay in their vessels while they’re on the River Walk. Alcohol is not allowed.

It will take a change in city ordinance to make paddling a permanent offering. Currently, the company that operates the existing tourist barges is the only company allowed to profit from on-the-water business on the River Walk. In the meantime, Neal has asked the city to let her operate from 11 p.m. to 2 a.m. Fridays and Saturdays on three weekends in December. She should get an answer later this month.

Judging by the fun he was having, Nirenberg likes the opportunity to kayak the downtown stretch of river. “I thought I’d seen every piece of the River Walk from every angle, being up and down it by foot and by barge over the years, but this was a much different experience to be at water level and paddling with the ducks,” he told me, before adding that city staffers are exploring ways to get people outside to enjoy the river for recreation and fitness during the pandemic. Paddling is one way to do that.