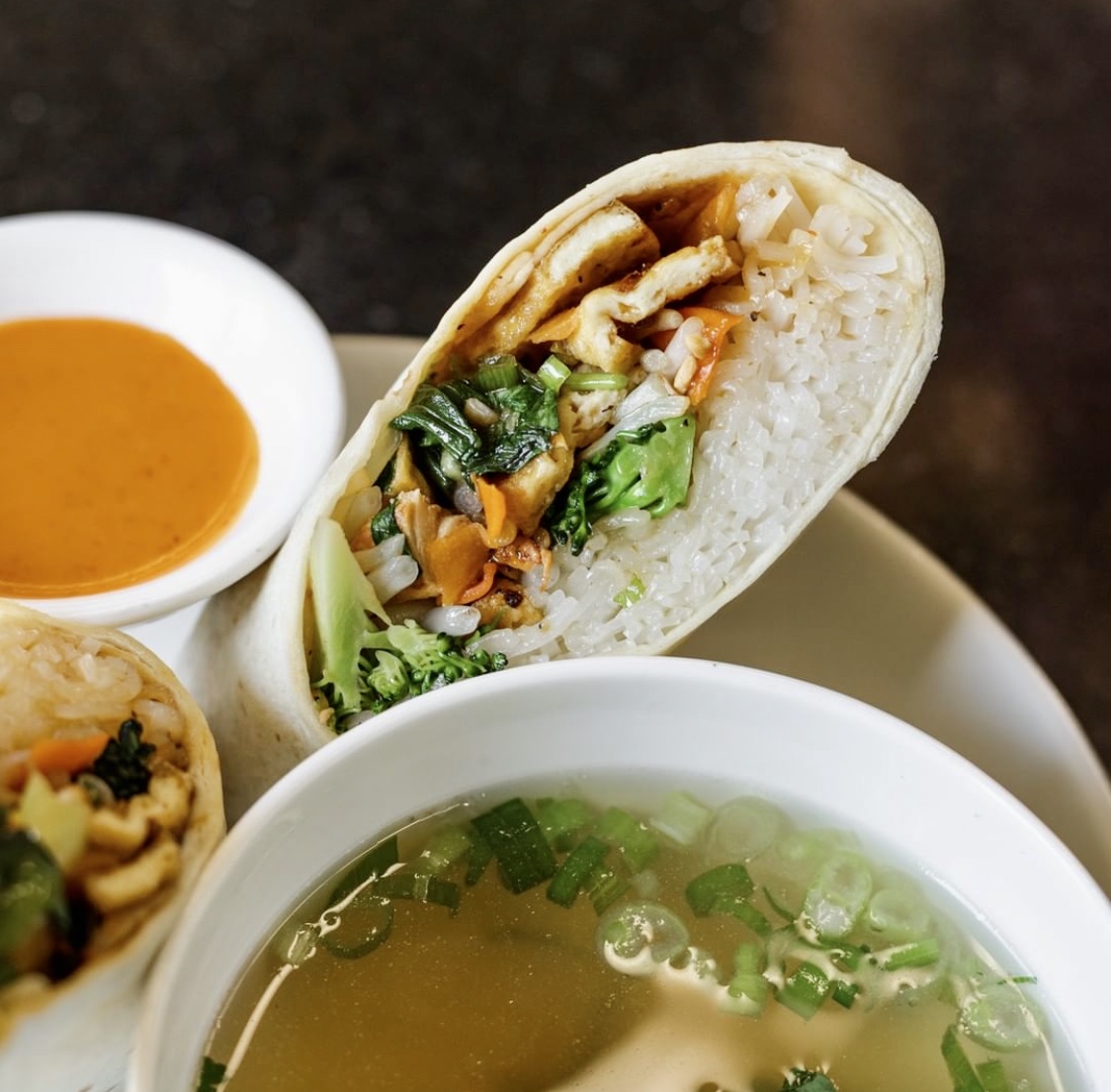 This PhoRito from ThaiBinh’s is filled with fresh veggies, tofu, and noodles, and is served with sides of broth and sauce for dipping. Photo courtesy ThaiBinh’s.

For ThaiBinh‘s owner ThaiBinh Ho, having a vegan restaurant was always his plan—but he didn’t want to compete with another vegan eatery located in the same plaza. But when the COVID-19 pandemic hit in March, the other restaurant scaled down and eliminated its vegan offerings, and Ho saw an opportunity to fill the gap. He temporarily closed the restaurant and spent the next five weeks outlining his transition plan. “I wanted to shut down to regroup and recharge and rethink my business model,” he says.

Ho, a self-taught cook born in Tuy Hoa, Central Vietnam, is no stranger to a plant-based diet. Growing up Buddhist, Ho says his family would practice vegetarianism once or twice a month on the first and the 15th day of the lunar calendar. As he got older and developed an awareness of the benefits of going meatless, he eventually became a full-time vegetarian, describing his change as a “calling.”

In 2011, he opened two vegetarian restaurants in San Jose, California. But after his divorce, Ho wanted a fresh start. He decided to let his ex-wife continue running the California businesses while he looked for a new opportunity elsewhere. 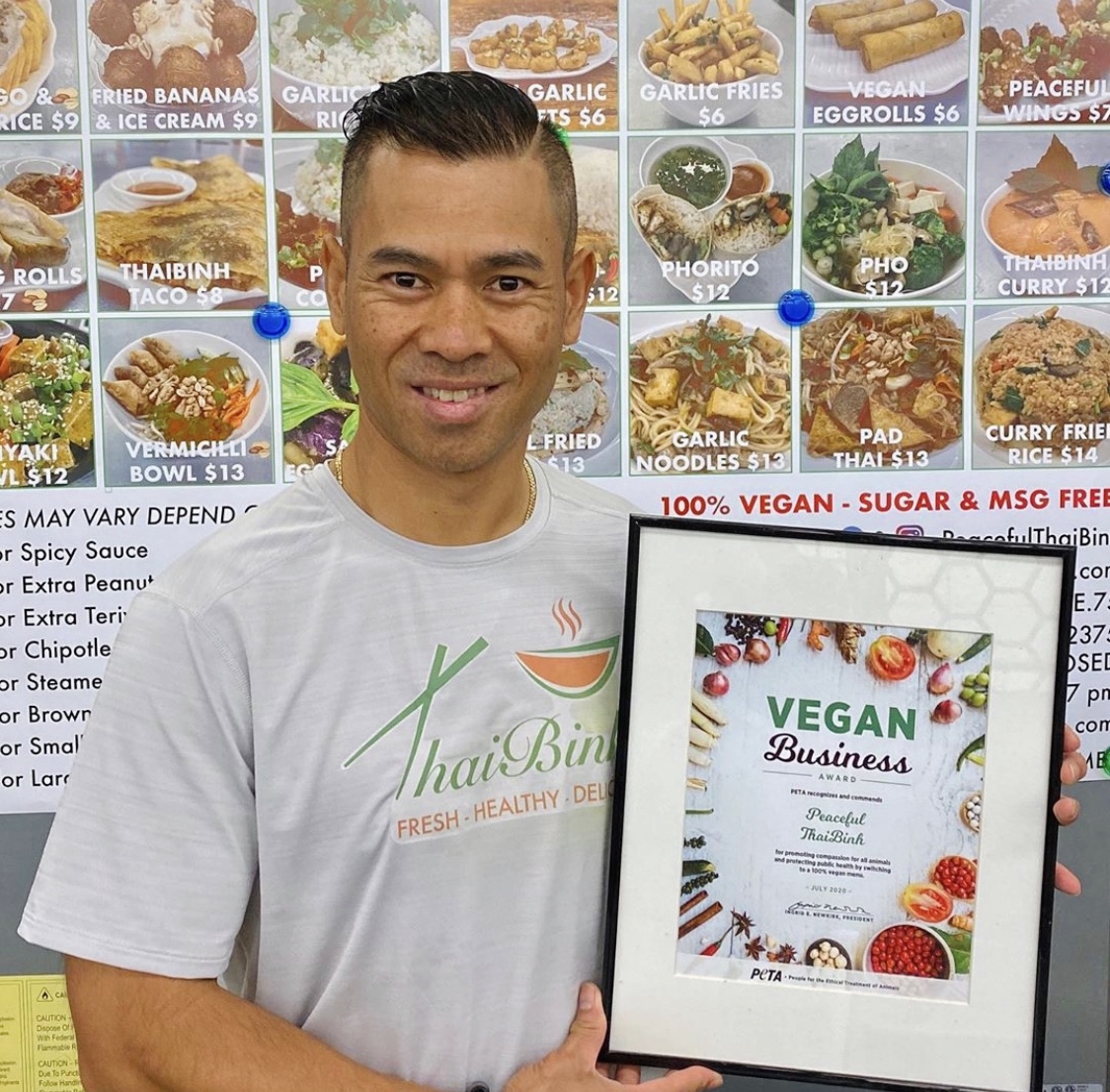 The lower cost of living and support of family nearby drew Ho to DeSoto, a suburb just south of Dallas, in early 2019. In June, he opened Pho ThaiBinh, a small, semi-vegetarian Vietnamese restaurant serving classics like pho and banh mi with ketogenic diet-friendly and diabetic-friendly options. “I actually ran the restaurant all by myself for the first few months,” he says. “[I was] taking orders, cooking, washing dishes, and everything.”

His recent rebranding included a name change (from Pho ThaiBinh to ThaiBinh’s) and a menu expansion from just three entrees and three appetizers to now more than 20 dishes, all of which are vegan. Despite mixed responses, Ho has been able to retain his clientele while capturing new vegan customers through social media and word of mouth.

When his non-vegan customers raise an eyebrow to the new menu options, Ho always tells them, “It’s the same taste, the same love that I put in [everything], the only difference is the protein.” One of his customers, who was a huge fan of the chicken spring roll, was the first to taste the updated faux chicken version. “And now he comes in and gets three orders [of them],” Ho says.

Eventually, Ho would like to open more locations of his restaurant while still keeping it a family-run operation. His father helps source local ingredients while his teenage son works the register. The cozy, informal feel is what Ho has always envisioned for his restaurant. “I’ve had customers [tell me], ‘You don’t belong here. You need to get a bigger space. You need a sit-down. You need this and that,’” he explains. “And my response has always been, ‘You know what, I enjoy this. This is what I love to do.’”

Ho says he feels fortunate to have come to DeSoto to start a business that he loves. His customers often ask him, “How come your food tastes so different? What’s in it?” “I cook passionately and compassionately,” he responds. “The main ingredient I put in all the dishes is love. That’s what you’re tasting.”