Stunned by the Cold: Sea Turtles Are in Peril During the Frigid Winter Storm

This week is expected to be the most severe cold-stunning event on record in Texas and the nation; 4,000 hypothermic turtles have been pulled from Texas coastal beaches and waters. 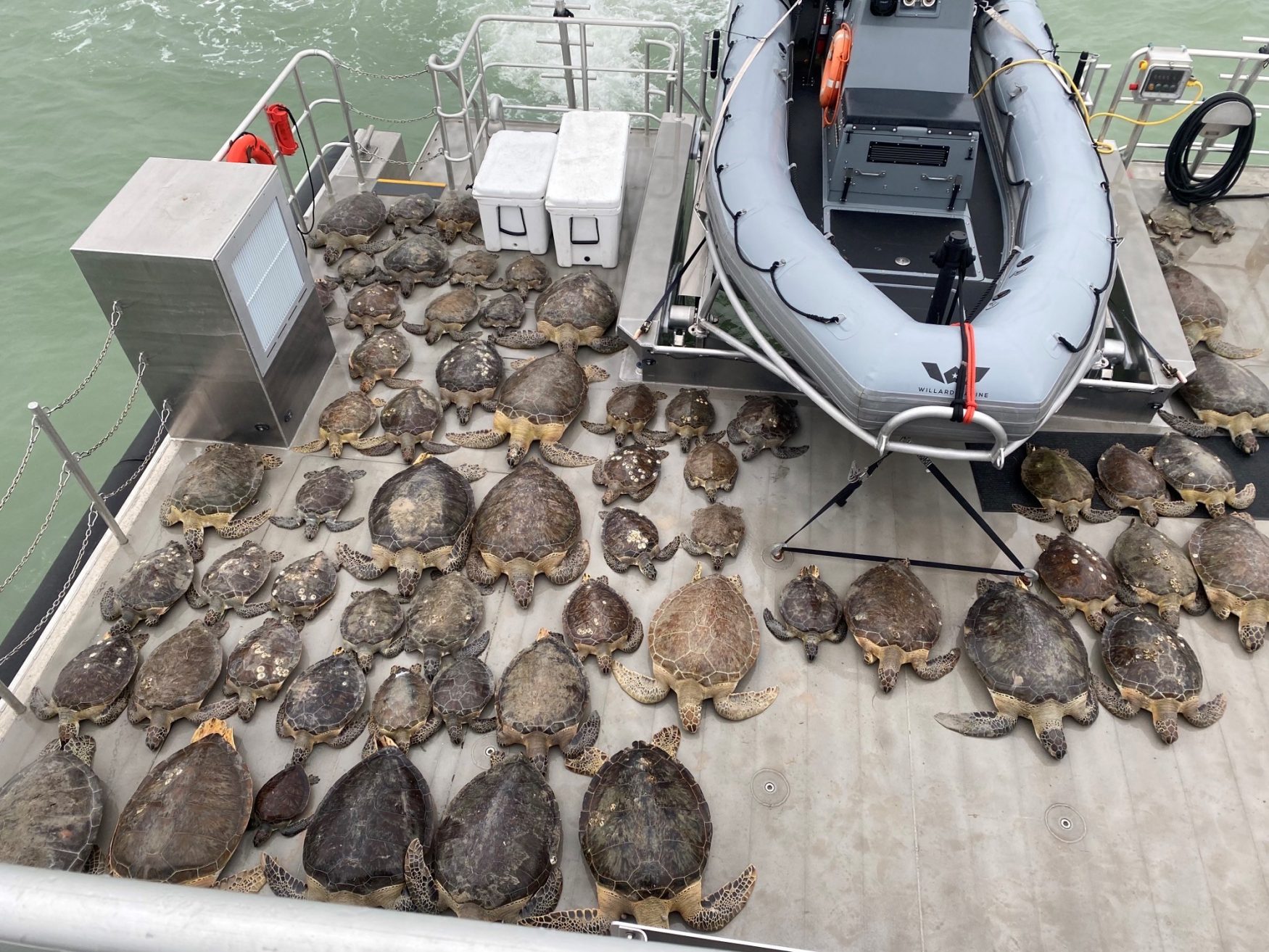 The Arctic air mass battering Texas this week has even reached the Gulf of Mexico, where typically temperate beaches have experienced snow, freezing rain, and persistent sub-freezing temperatures.

People aren’t the only ones suffering. The storms have created hypothermal conditions for thousands of sea turtles, a condition known as cold stunning. As of Wednesday, rescue organizations had recovered more than 4,000 cold-stunned sea turtles along the Texas coast.

Once the final counting is done, it will be the country’s largest cold-stunning event since the Sea Turtle Stranding and Salvage Network was established in 1980, said Donna Shaver, director of the Division of Sea Turtle Science and Recovery at Padre Island National Seashore.

“This is an historic event, from the standpoint of the temperatures and the turtles,” Shaver said. 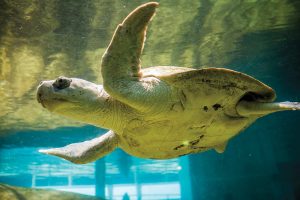 A Kemp’s ridley like those at Sea Turtle Inc. Photo: Kenny Braun

Five species of endangered or threatened sea turtles—green, loggerhead, hawksbill, leatherback, and Kemp’s ridley—live on the Texas coast. They eat crabs, fish, jellyfish, and mollusks, and many of them crawl ashore in the summer to make nests amid the sand dunes.

As reptiles, sea turtles cannot regulate their body temperatures. When the water drops below 50 degrees, they become lethargic. Unable to swim, their cold-stunned bodies float at the surface, where they’re at peril of getting hit by boats or washing ashore. There, they can die of shock or predation.

Every winter, sea turtle rescue organizations, along with volunteers, game wardens, and universities, monitor shallow inshore waters and shorelines where temperatures can drop rapidly and stun sea turtles before they can move into deeper, warmer waters. They also keep an eye on the Intracoastal Waterway and other channels that can lure sea turtles into shallow bays.

But this week’s storm has had an extraordinary impact. More than 8,000 cold-stunned sea turtles were found during the week of the storm. About half of them were already dead, while the remainder were rescued, Shaver said.

On Tuesday, Texas Parks & Wildlife Department game wardens out testing the motors on one of their patrol vessels near Brownsville came across cold-stunned sea turtles. They brought in more than 100 turtles. Chris Dowdy, the Brownsville game warden captain, estimates that the agency has rescued about 500 sea turtles this week.

“When we first went out there, we’re looking at hundreds or maybe thousands of turtles just floating,” Dowdy said. “Wardens spent all day Monday pulling 200- to 300-pound turtles into boats. Everybody got a good workout. We can’t say enough how much we appreciate the public assisting where they could, as well as Sea Turtle Inc, U.S. Fish and Wildlife folks, our coastal fisheries group, and the city of South Padre Island, providing a location to hold them. It’s been a total team effort.”

Rescue is no guarantee of survival for the animals, either, given the state’s widespread loss of power and water. Typically, cold-stunned sea turtles are kept in warm water until the weather is warm enough to release them, but currently, many are not in water at all.

Of five rehabilitation facilities in Texas, three were without power or water as of Wednesday, Shaver said, including Sea Turtle Inc on South Padre Island and the Animal Rehabilitation Keep in Port Aransas.