Texans Have More In Common With Jane Austen Than They Think

On the English author's 245th birthday, we discover just how much her legacy endures in the Lone Star State 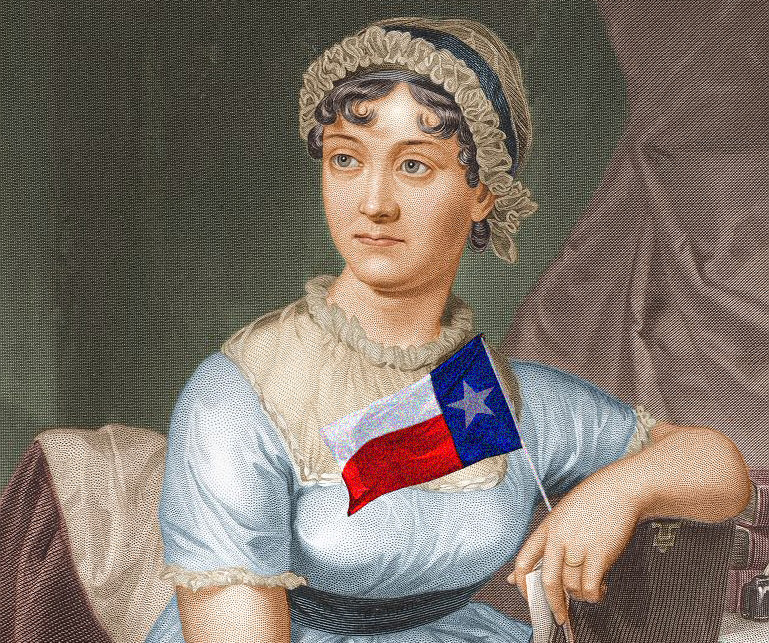 With Dec. 16 marking Jane Austen’s 245th birthday and this month the 205th anniversary of the publication of Emma, the last of her novels to be published in her lifetime, “Janeites” the world over have double reason to celebrate their favorite novelist. But it got us wondering: besides WWJD (What Would Jane Do?) in pandemic times, does Austen have any special resonance to Texans other than the fact that her surname coincidentally sounds like the name of our state capital?

It turns out she certainly is popular in the Lone Star State. There are four Texas regional groups of the Jane Austen Society of North America—one each in Dallas, Houston, and Austin-San Antonio, and a fourth dipping in from Arkansas and Louisiana in the Ark-La-Tex group.

The DFW group is the largest and most active. Founded in 1994, the group will be hosting an Austen birthday party on Zoom, exhorting members to show off their favorite teacup for the rest to see. Barbara Butler of the Houston-area chapter says that in pre-pandemic times, the Houston group met at a local library for tea, learned English country dancing from a local troupe, and put on a fashion show of Regency period attire.

(For those interested, membership to the organization also includes a subscription to the society’s quarterly newsletter, participation in sponsored regional book clubs, and informal get-togethers such as Austen-related movie nights, and an invitation to the Super Bowl for North American Janeites, the JASNA annual general meeting held each autumn.)

At the behest of Melinda O’Connell, director of the South Central Texas JASNA chapter, I reached out to Janine Barchas, a professor of English at the University of Texas at Austin, who demurs over her bulky official academic title (Louann and Larry Temple Centennial Professor in English Literature) in favor of simply stating, “I teach Austen in Austin.”

Barchas is being overly modest. Her reach extends far beyond lecture halls via books such as The Lost Books of Jane Austen and Matters of Fact in Jane Austen: History, Location, and Celebrity, each of which are less examinations of the text of Austen’s work than dissections of the machinery by which Austen became and remains the international literary phenomenon that she is. (Much of Barchas’ research was done at UT’s Harry Ransom Center, which asked her to curate a special exhibition, Austen in Austin, just last year.)

Through the website What Jane Saw, Barchas endeavors to reconstruct some of the creative milieu from which Austen drew inspiration: She has virtually reconstructed two blockbuster exhibitions Austen took in during her lifetime, an 1813 retrospective of the portraiture and subject paintings of Sir Joshua Reynolds, and a 1796 exhibition of contemporary paintings inspired by Shakespeare.

“She’s just hitting her stride at the 200-year-mark,” Barchas says, noting that a certain other English writer was coming into his own two centuries after his death. “There is a celebrity culture evolving around Austen today just as there was around William Shakespeare 200 years ago.” (As exemplified, she points out, by the 1796 exhibition Austen viewed just as she was embarking on the writing of Elinor and Marianne, her first novel.)

Shakespeare’s reputation has only grown since then, Barchas says, and today, with Austen still “Hollywood’s darling,” as she puts it, “Austen’s afterlife is just beginning.”

So how would Austen handle the pandemic, I asked her.

“We didn’t invent pandemics,” Barchas points out. “Actual scholars have written about what people did in those days. And in Austen’s world, people acted the way we act now simply out of the prevailing standards of propriety. Social distancing was a matter of course.”

For fun, Barchas pointed me to a rivulet of Janeite internet memes and articles that highlight the similarities between the lives and especially the romances of the landed gentry in England’s Georgian/Regency period and today.

“In a Jane Austen novel, there’s always a young woman on the cusp of adulthood, right at that giddy, exhilarating stretch when your life really starts to happen,” writes Jessica Goldstein of Marie Claire. “But instead of getting to travel the world, galivant about with friends, go to a university, maybe get a job so her entire financial future doesn’t hinge on her fiancé’s estate situation, our heroine just … hangs out at home.”

Gilbert Saldivar, of Houston, was once a member of a small Facebook group for men who read Austen. He believes a pandemic “would become a prison sentence” for Austen’s characters. “I think Zoom calls would quickly become high art, and text messages would fly thickly regarding who was (not) invited to the most discriminating calls featuring the most scintillating breakout-room discussions.”

As for a peculiarly Texan appeal to Austen, Barchas doesn’t see it. Neither does the majority of the dozen or so Austen fans with whom I corresponded. Most, if not all, are city folk, but Houstonian Stephanie May, who grew up in a landowning family in Arkansas, has a compelling view on how much certain Texans have in common with Austen’s characters.

“Even before COVID, 21st century Texans who live on the huge, old ranches that encompass the entire county home-school and worship on the ranch,” she tells me in an email exchange. “They have social ‘bubbles’ often consisting of family and hands who are permanent residents of the ranch. Eating out is literally eating outside at a barbecue for the ranch inhabitants and maybe a couple distant neighbors. Trips to town are few and far between. It’s not unusual for the larger ranches to have a home in town in addition to the main house at the ranch headquarters and therefore enjoy a social season much like Jane’s British aristocrats who would travel to London.”

As to What Jane Would Do in a pandemic, May was blunt: