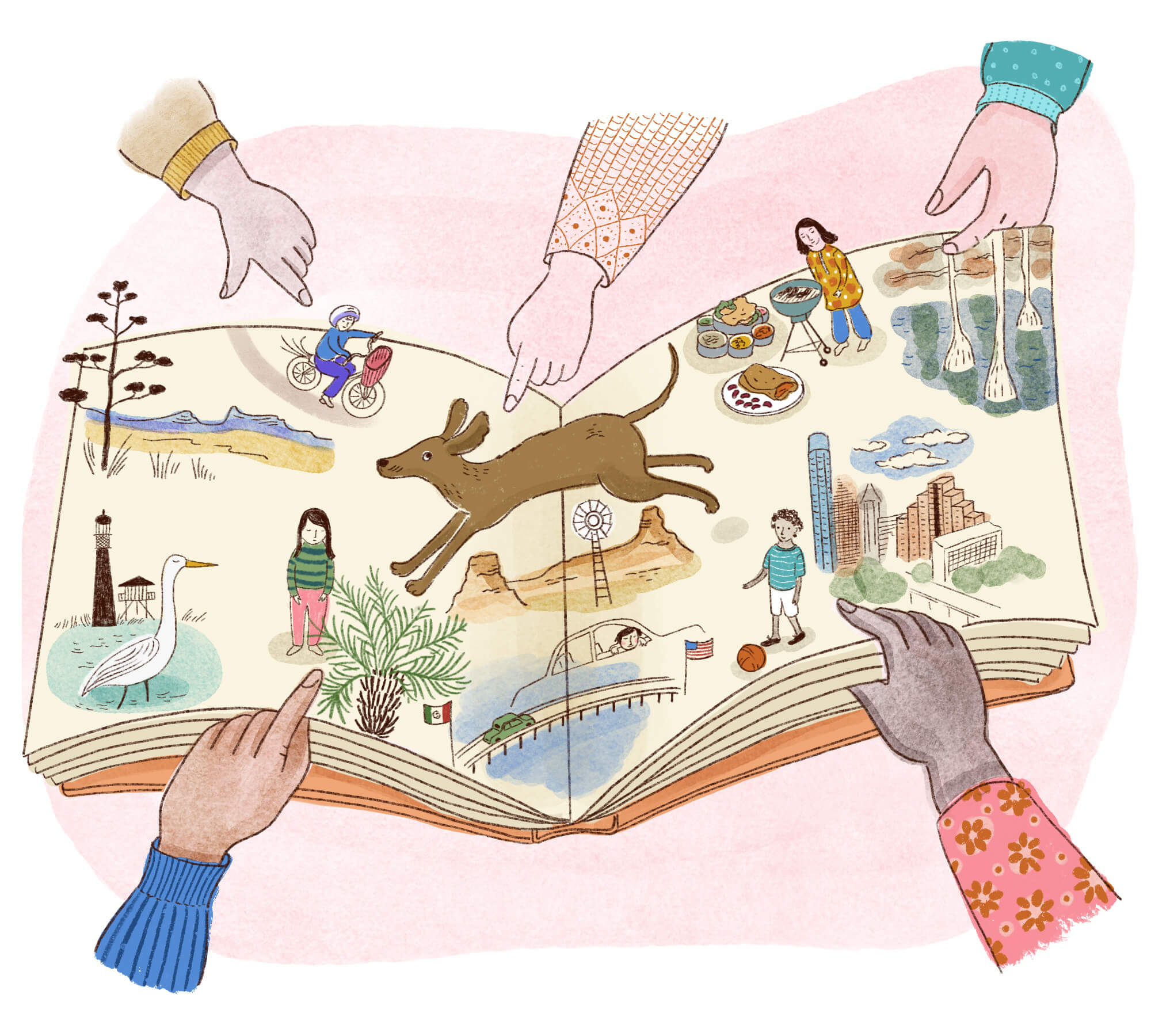 On the Same Page

From Hank the Cowdog to They Call Me Güero,
children's literature unites readers across the state

When my mother took me to the public library and handed me a copy of John Erickson’s The Original Adventures of Hank the Cowdog, I knew I had met my soulmate—even if he was an overconfident-but-means-well cowdog.

At the time, my only other window into the wider world was TV, where things were different. The major family sitcoms—Home Improvement, Full House, Family Matters—all seemed to imply that real people lived in suburbs or major cities, in two-story houses with paved streets, nuclear families, and the occasional kooky neighbor.

My father drove a truck and my mother was a rural nurse on call, so that put a wrench in regular dinnertime. Our trailer sat on a piece of empty prairie off US 77 outside of Warda. (Oh, how I pined for that sidewalk on which to learn how to ride a bike just like Michelle Tanner.)

But with Hank, as envisioned by the old Panhandle cowboy Erickson, no longer did a story require a nuclear family and a paved road—a put-upon cowdog living on a dusty prairie was enough. With each of Hank’s misadventures solving mysteries and “crimes” on the ranch, I learned that it’s OK to make mistakes, that people act tough but are usually soft inside, that there’s nothing wrong with pretending your leg is broken when someone is trying to use you as a scapegoat.

With each case closed, I learned a little bit more about the big stuff of life—greed, pride, power, and love. And it was all delivered within the confines of ranching, a lifestyle I knew well thanks to weekends spent running cattle with my family. Hank showed me that a life like mine was worth capturing on the page. My lived experience was an important story to tell.

After high school, Erickson felt an obligation to go to college and wash Texas off his skin. “Perryton seemed a lonely, windswept, ugly little town,” he tells me. “If there was anything important going on in the world, it was not happening there.”

But Cambridge, where Erickson attended Harvard Divinity School, just didn’t fit. After a year away, he realized Texas was the only place for him and came home. He tried for years to write the “serious stuff” that New York publishing couldn’t get enough of. But it didn’t feel right. He decided instead to just have some fun with writing. Hank was born. And in writing Hank, Erickson made a proud Texan out of me, and many other Texas children, for life.

I was lucky. I saw myself mirrored in literature at an early age, even if it was in the form of a cowdog who, as Erickson describes him, “lies all the time and doesn’t know what he’s doing.”

Hank turned me into a reader, a writer, and eventually a children’s librarian. Every day, I have the honor of placing the right book into the right child’s hands. Thanks to “kidlit,” publishing’s shorthand for children’s literature, there is no dearth of wonderful books with stories and characters to validate and reaffirm every child’s lived experiences. And because Texas is a huge state fueled on a culture of storytelling and pride, Texan authors have cornered a pretty good piece of this market.

Texas is a state full of wonder, diverse in geography, diverse in culture, diverse in people—diverse in stories. What Hank’s adventures were for me, other stories are for other children growing up elsewhere in Texas. If their stories manage to get told.

“We have this massive abundance for mythology here in Texas,” says Kathi Appelt, a children’s author and seventh-generation Houstonian who lives in College Station. Take a moment and you can picture these Texas legends—the “Gone to Texas” taming of the frontier; the scrappy underdog Alamo story; all of the big boots, big hats, and big personalities under one big Texas sky.

The understood “fairy godmother” of Texas’ kidlit scene, Appelt has long mined Texas’ rich geographical and historical tapestry for stories. Over the years, she has examined various aspects of Texas landscapes and lives, such as the Gulf Coast and chosen families in Keeper and the desert and camels of West Texas in Once Upon A Camel. For Appelt, it’s not enough that a story is emotionally resonant—it must be historically accurate. This was especially important in her book Angel Thieves, where she challenged the idea that Texas’ independence story was all about fighting back against Mexican oppression rather than landowners’ desires to uphold the institution of slavery.

“Some of these myths have prevented us from addressing things that need to be addressed,” Appelt says.

The biggest myth? There’s only one kind of Texas story.

“We’ve had an explosion of books by writers from underrepresented communities writing about underrepresented identities, which is fantastic,” says David Bowles, a Mexican American author whose family has hailed from the Rio Grande Valley before Texas was Texas. His book They Call Me Güero focuses on the experiences of a boy living on the Texas-Mexico border who is made fun of for his pale skin and freckles, despite the fact that he is “puro Mexicano.” Published by Texas’ own Cinco Puntos Press in El Paso, Güero was a massive hit, earning accolades far and wide, such as the Tomás Rivera Mexican American Children’s Book Award in 2019.

The increase in kidlit’s diversity can be attributed to a number of developments in the publishing industry. The We Need Diverse Books movement, borne out of Asian American author Ellen Oh’s frustration of repeatedly seeing all-white panelists at book conferences, strives to create a world in which all readers can see themselves in the pages of a book. Lee & Low’s Diversity Baseline Study and the Cooperative Children’s Book Center release a drumbeat of industry surveys showing that both the books and the people creating those books for children are still overwhelmingly white despite the industry’s promises of diversification. Meanwhile, the melting-pot population of the United States continues to diversify at a steady rate—non-Hispanic whites have made up less than half of the Texas citizenry since 2005.

Regardless of what the numbers state, one thing is for sure: Every child deserves their own Hank.

“In all of my time attending Milam Elementary and Lincoln Junior High in McAllen, then PSJ High School in Pharr, I never encountered any Mexican American voices in any of the stacks,” Bowles says. This comes despite the fact that the majority of community members around him were Mexican and/or Hispanic. “It was a systemic absence, an erasure of my community.”

e.E. Charlton-Trujillo, a South Texas native from Mathis and author of books centered on Hispanic Texan stories, remembers little of her Latinx identity celebrated in literature. “My textbooks and teachers rarely taught stories about Mexicans or Latinx people in the role of inventor, creator, or change-maker,” she says. “It was as if we’d done little beyond working the fields or breaching the Alamo.”

Trujillo’s newest picture book, Lupe Lopez: Rock Star Rules, tells the tale of a plucky young Mexican heroine who attends Hector P. Garcia Elementary and who is far more interested in turning her pencils into drumsticks than following any of Ms. Quintanilla’s rules. The story itself is engaging, but the illustrations by Joe Cepeda, featuring a classroom with bilingual signage on the walls, make the book.

“Specificity leads to universality,” Bowles says. “In understanding the particularities of my life or the life of characters like me, readers understand Mexican Americans on the border to be human, to share the same hopes and dreams and fears as they do.”

Simply putting diverse characters in books is not enough. The characters and their stories need to be authentic, true to experience.

“For many children, a picture book is going to be their first experience of representational art,” Appelt says. For children who haven’t yet learned to read or are just starting to master the skill, picture books are the gateway into literature and a love of reading. A wide range of literature with variety in the illustrations, specific and authentic to a child’s lived experience, show there are many ways to exist in the world. And all are valid.

Saadia Faruqi found the inspiration for her popular early-reader series, Yasmin, when she discovered there was little in early 2000s children’s literature that showed Muslim families in a positive light, especially in a post-9/11 America. Faruqi, who immigrated from Pakistan to Houston over 20 years ago, felt it was her duty as a mother to her two Texan children to create that affirming representation.

“There were no books where they could see themselves on the cover and just be the hero of the story,” Faruqi says. So, she set to writing Yasmin the Builder, the first in a series featuring an adventurous Pakistani second grader and her multigenerational family. The books have proved popular with children of all backgrounds, not just those culturally and religiously similar to her.

Faruqi recalls one school visit to a very white community; she was surprised to hear one little blond-hair, blue-eye boy exclaim that he loved Yasmin because Yasmin was just like him.

“My mouth dropped open,” Faruqi says, wondering what the two could possibly have in common. The boy said Yasmin was just like him because Yasmin liked to play soccer and he did too.

“I love that readers are able to find my books and see some parts of themselves in them,” says Varian Johnson, the Austin-based author of The Parker Inheritance. The book, which follows two Black tweens who need to unravel an old mystery about their once-segregated town in order to find a long-lost fortune, was highlighted on the Texas Library Association Spirit of Texas and Lone Star Lists.

“We talk a lot about the power and the importance of seeing yourself in books, which is super valid,” Johnson says. “But I want others to see me as well.”

If you spend any time working with children, you may hear a common refrain coined by Rudine Sims Bishop, the “mother” of multicultural children’s literature.

Bowles sums up this literary quilt with an old Nahautl word: mecayotl. It implies a kind of metaphorical lineage, a rope that has all the strands of people’s identities and stories woven together to form the past, present, and future of our shared stories. But for Erickson it doesn’t have to be that serious.

“If literature makes people feel worse about themselves, then what’s the point?” he asks. “Oughta just buy a case of beer.”