Despite pandemic concerns and winter setbacks, orchards see no shortage of customers or sweet fruit 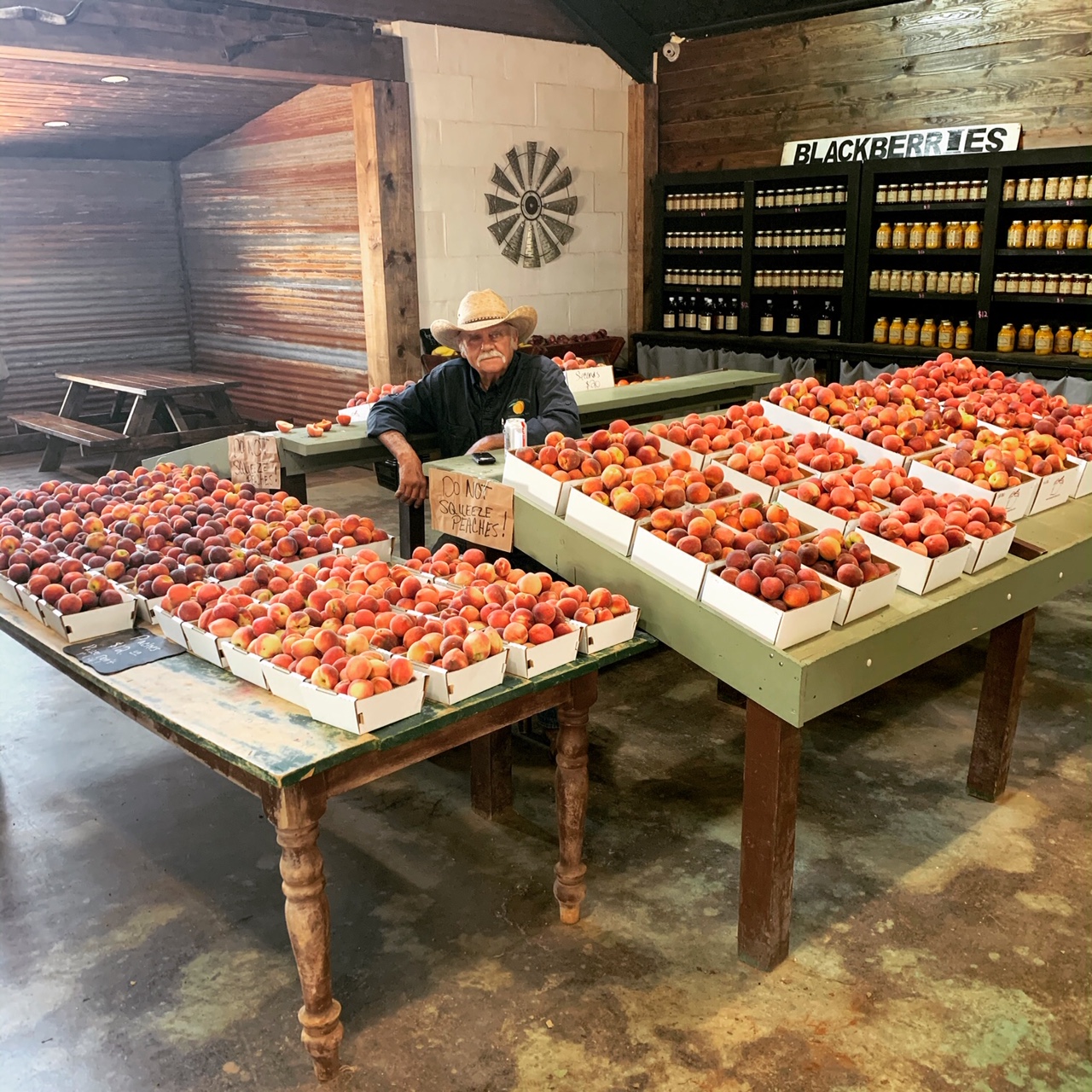 Roadside peach stands in the Hill Country and North and Central Texas are reporting brisk traffic as peaches ripen in the family-owned orchards that are annual summertime destinations for generations of Texans. And while 2020 may not be a bumper crop, farmers say there should be plenty of sweet peaches available throughout the season.

Concerns over COVID-19 don’t seem to have dampened customers’ interest in visiting peach stands, which have implemented safety protocols related to social distancing, and in some cases, options for curbside pickup.

“Today, for instance, we were overrun like we are on many Saturdays, and it’s a Wednesday in early June!” Jamey Vogel of Vogel Orchards in Stonewall said earlier this month. “It seems that people are just wanting to bust out, and getting fresh peaches is a fun, safe, satisfying activity.”

Vogel’s Hill Country neighbors at Burg’s Corner on U.S. 290 likewise attracted swelling numbers. “Not only are the peaches coming in abundance, but so are the customers,” said Kristen Duecker, second-generation manager of the Duecker family’s peach emporium. “We are busier than ever despite the pandemic.”

Burg’s Corner plucked its first freestones, the Harvester variety, by June 11, soon to be followed by Bounty, Majestic, and Red Globe before the month’s end. The popular Loring variety is expected to arrive in early July.

“My dad Jimmy estimates 80 percent full production rate on our crop,” said Kristen Duecker. “It’s not quite as big a crop as last year but still an awesome year.”

Vogel was finishing its initial Harvester and Tex Royal freestone harvest by the second weekend of June, with Cary Mac and La Feliciana varieties upcoming and more traditional Loring and Red Globe “starting to color and not too far away,” according to Jamey Vogel, who thinks freestones will remain available through mid-August. Fresh peach preserves and peach butter chipotle sauce from Nelda Vogel, Jamey’s mom, fill Vogel’s shelves as well.

West on U.S. 290 toward Fredericksburg, Jenschke Orchards offers a “Pick Your Own” program that supplements roadside sales of its 26 varieties. But you can’t dither when the reservation system opens: A June 12 Facebook post invited signups for peach-picking the following Monday and Tuesday; within a day, all pick-your-own slots were filled.

Though modern agricultural methods and irrigation mean peaches can grow from the Rio Grande Valley to the Panhandle, Texas family-growing peach tradition thrives in three regions that together make the “Texas Peach Triangle,” from Gillespie County in the Hill Country east to Freestone County between Dallas and Houston. The third point is northward on both sides of the DFW Metroplex in Kaufman County and Parker County.

I once plotted a memorable journey across the peach triangle for Texas Highways with my spouse, Eileen, getting to know the families who have nurtured their orchards through cycles of drought, freezes, and economic downtowns—though never a threat like COVID-19.

This year, we added Ham Orchards near Terrell east of Dallas, where Judy and Dale Ham planted the first of their 10,000 peach trees four decades ago. Eileen and I were masked-up, I wore disposable gloves, and we took our own paper bags, joining hundreds of others on June’s second weekend to buy Ham’s self-proclaimed “jewels of summer.”

Jim Kamas, a Texas A&M University horticulturist based in Fredericksburg, said prospects are good for Hill Country varieties for the remainder of the 2020 season, marked by successive arrivals of freestone varieties like Red Globe, Redskin, Dixiland and Loring.

“This year’s crop was reasonable for us. We had about 1,000 hours of winter chilling—a really good amount,” he noted, referring to sustained cooler temperatures that protect but don’t freeze the buds. A warm January negated some of the effects of ample chilling, but “a lot of the stuff that got hurt was early stuff,” he said. “Most of our later varieties that people look for (freestones), they look strong.”

Kamas said he he was impressed with health protocols when he visited Hill Country stands in early June. “All practiced the best COVID-19 containment practices I see in the entire community,” he said. “I am incredibly proud of them.”

While business goes on, pandemic concerns prompted the Stonewall Chamber of Commerce Stonewall to cancel the town’s 59th annual Peach JAMboree and Rodeo, which had been scheduled for June 18-20.

At Central Texas’ Cooper Farms, Elizabeth Johnson said the region’s three hailstorms, an early freeze in November, a late freeze in March and “weird chilling hours” resulted mid- and late summer crops being about 50 percent of last year’s bounty. “The main takeaway is that peaches are here now,” she said. “They are good and sweet and people need to come buy them sooner rather than later.”

Besides its main retail location on Interstate 45 in Fairfield, Cooper operates popup stands in Waco, Conroe, and Huntsville that are “much busier than usual,” Johnson said. “We assume it’s an open-air market and people are more comfortable there than a store. Or maybe they are just bored and wanting to get out of the house. Either way, people are more excited about peaches and fresh produce than I’ve ever seen.”

The peach crop at Hutton Fruit Farms west of Weatherford in Parker County is “overall a hair better than last year,” said Gary Hutton. “Some varieties there are more of and then some a little less of.”

His peach shed off U.S. 180 will be open through Labor Day, and Hutton peaches also are sold at the family’s downtown Weatherford Farmers Market. About COVID-19, he said it is a customer option whether to enter the store with a mask. “Our regulars, we still recognize them,” Hutton said. “I tell them, ‘I know who you are.’”

Another sign of Texas peach season’s arrival is additions to seasonal menus of bistros and restaurants that make the most of fruit from Texas’ leading family orchards. 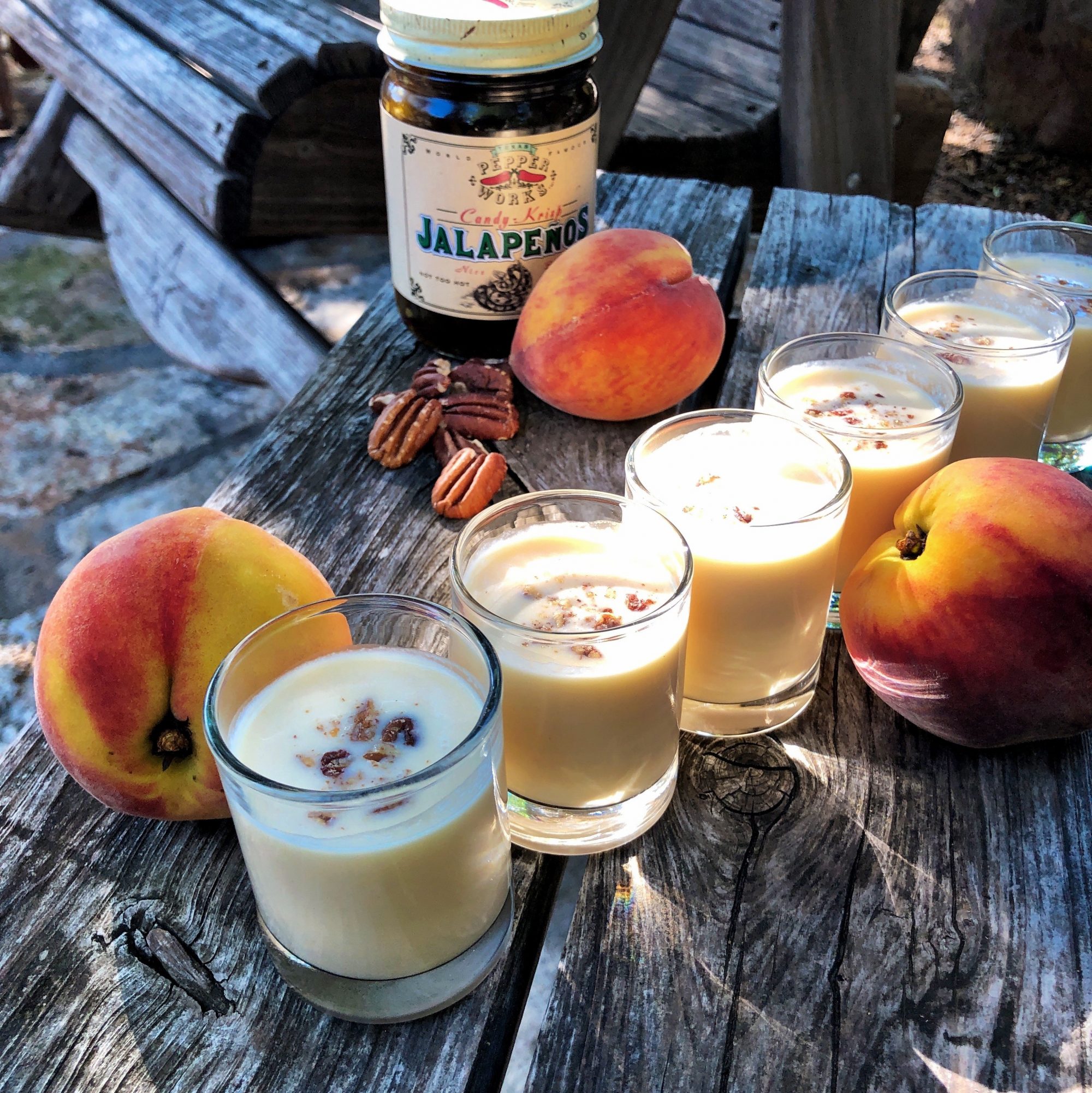 Chef Ross Burtwell of Cabernet Grill in Fredericksburg welcomed local peaches to his 2020 cuisine with a starter he calls Hill Country Buttermilk Peach Soup. “We offer a little complimentary tidbit or amuse-bouche at the beginning of a meal,” he noted of the chilled soup spiked with toasted pecans and candied jalapeño. “We serve it is a shot glass to each diner when they sit down. As the season moves along, we will be playing with multiple menu items that feature peaches and, of course, we have frozen peach-a-ritas.”

Serves four or five as an appetizer