Founded by a tennis-loving couple, the museum is located within the Texas Sports Hall of Fame 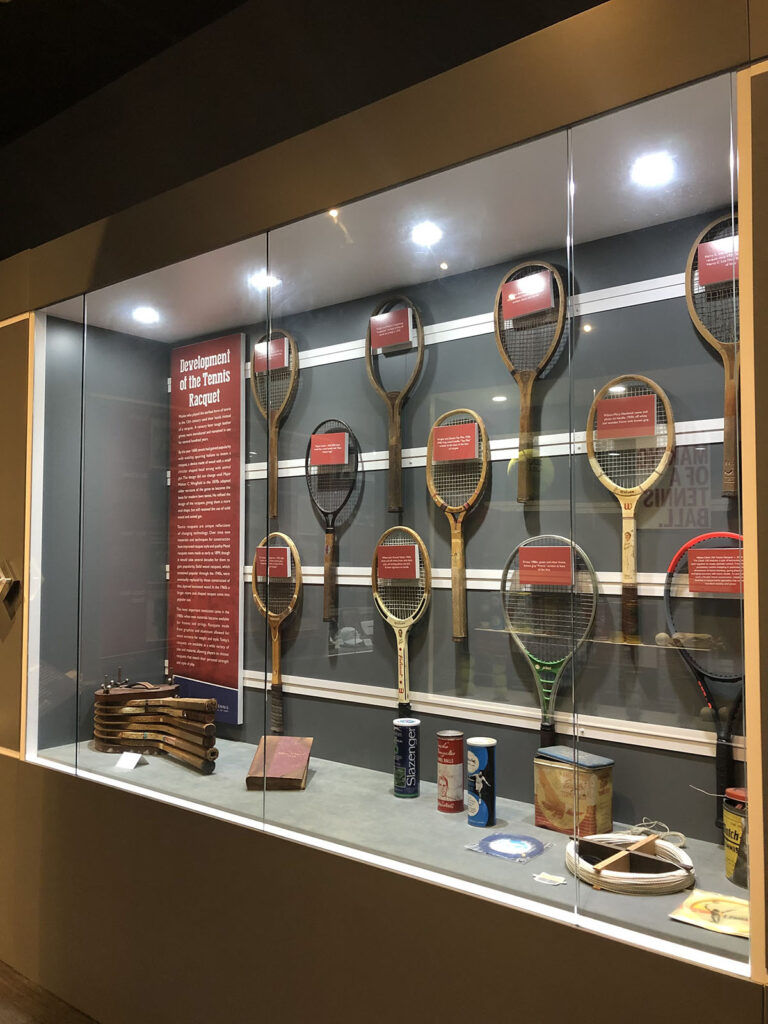 A display of the evolution of racquets at the Texas Tennis Museum and Hall of Fame. Photo by Sarah Thurmond.

Before there was Chip and Joanna Gaines, Waco had another visionary couple: Charlie and Emadele McCleary. Students at Waco High School when they met in the 1930s, the McClearys shared a love of tennis. She was the No. 1 player on the tennis team; he became a tennis pro and founder of the Waco Tennis Association at age 18. Together, they grew the popularity of the sport in their hometown, with Charlie even organizing exhibitions that brought the biggest names of the sport, including Ellsworth Vines and Bill Tilden, to Waco.

But that was just the beginning of the couple’s legacy. Over the decades, the McClearys’ devotion to the sport led to the creation of the Texas Tennis Museum and Hall of Fame. On Saturday, the museum marks its 40th anniversary. To celebrate, visitors get free admission with a voucher.

Located inside the Texas Sports Hall of Fame, just off of Interstate 35 and next to the campus of Baylor University, the tennis museum is the culmination of the McClearys’ effort to pay tribute to all the players who contributed to the sport’s popularity in the state—from public school UIL participants to tournament organizers all the way up to Grand Slam winners—and honor the rich history of tennis in Texas, which dates back to the late 1800s, when the game was played with wooden racquets in empty fields.

The McClearys first approached the Texas Tennis Association with the idea for a hall of fame and museum in the 1970s. At the time, the state was a hotbed for the sport. Beyond its recreational popularity, tennis’ modern professional roots were planted in Texas.

Dallas oilman Lamar Hunt, then owner of the Kansas City Chiefs, funded World Championship Tennis, a precursor to the men’s current ATP Tour. The Virginia Slims tour, which evolved to be the Women’s Tennis Association, held its first tournament in Houston in 1971. Houston’s Astrodome was the site of the famous Battle of the Sexes match between Billie Jean King and Bobby Riggs in 1973. And at the college level, universities like Trinity and Rice were dominating at the NCAA championships. All of these people and moments are represented at the museum.

With the association’s support, Charlie and Emadele set off on a 14-week trek across the country to tour other sports halls of fame. Among the places they visited were the National Baseball Hall of Fame in Cooperstown, the Pro Football Hall of Fame in Canton, and the International Tennis Hall of Fame in Newport, Rhode Island. “They came back convinced that Texas tennis deserved the same type of recognition,” says board member Sara White.

In 1981, with the tennis association and city of Waco on board, the Texas Tennis Museum and Hall of Fame opened in a house on Jefferson Street, across from the Sul Ross Tennis Center (which is now a skate park). The first inductees included legendary University of Texas tennis coach Dr. Daniel A. Penick, aka the “Father of Texas Tennis,” and his student Bruce Barnes, who was one of the sport’s first professional players during the 1930s.

San Angelo native Ken McAllister, who played No. 1 singles and doubles for Southwestern University in the 1960s and went on to be a successful high school coach and a top-ranked player in the state, is the current president of the museum. He recalls its early days.

“Tennis people knew all about the museum next to the tennis center in 1981,” he says. “All of us would come play the Waco tournaments and couldn’t wait to go over and see what Charlie put together at the museum.”

McAllister was inducted into the hall of fame in 2013. One of his biggest claims to fame is being a linesman during the Battle of the Sexes match, which is showcased in one of the museum’s permanent exhibitions. It was through his connection to that match that McAllister secured the original scorecard for the museum, a gift from the widow of the chair umpire. (You can read more about McAllister’s experience at the Battle of the Sexes in his 2019 book, Cattle to Court: A History of Tennis in Texas.)

The Texas Tennis Museum and Hall of Fame moved to its current location in 1993, when the Texas Sports Hall of Fame opened. Just minutes from the crowds at Magnolia in the heart of downtown Waco, it’s a great place to visit even if you’re not a sports fan.

On your right as you enter the complex is the Tom Landry Theater. It’s full of Dallas Cowboy memorabilia and has a video with former players and coaches talking about the coaching legend. Further in is a huge Nolan Ryan exhibit, with items contributed to the collection by the legendary baseball pitcher’s foundation in Round Rock.

In the tribute rooms, you can find different sports represented. The collection ranges from old golf clubs on display in the Harvey Penick case to Sports Illustrated covers featuring boxing great George Foreman, who lives in Houston, to saddles from rodeo star Ty Murray, who has a ranch near Stevenville.

In the very back of the museum is a small room dedicated to high school football. Before it, though, is the massive Southwest Conference Gallery, which contains a replica of a football field with a giant scoreboard. Every college that was in the defunct SWC is represented with various memorabilia, from mascots and cheerleader uniforms to photographs of important players and coaches.

As William Haliburton, visitor experience and gift shop manager at the hall of fame, says, “People think they’re coming for one hall of fame and they end up getting four.” That’s because the Texas Sports Hall of Fame is made up of other halls of fame that have shuttered over the years.

Founded by a group of sportswriters in 1951, the original Texas Sports Hall of Fame didn’t have a home until Lamar Hunt stepped in and built a location in Grand Prairie in 1981. It closed five years later. “Around ’89, ’90, there was talk of finding a new city,” Haliburton says. “A few Waco business leaders got together and proposed to Lamar Hunt they could put it on display.”

One of those leaders was Charlie. According to White, Waco was already in the process of adding collections from other sports at the location of the tennis museum when Grand Prairie closed.

“[City leaders] saw a huge opportunity to have a really spectacular sports hall of fame,” she says. “They offered to build the building. Tennis became a big part of the building, and Charlie McCleary was instrumental in getting all the groups together.”

McAllister says that Charlie made sure part of the deal included that a certain percentage of space be given to tennis. And even though it’s just 2,000 square feet within the 35,000 square-foot complex, it’s a considerable amount dedicated to a sport that’s not football, baseball, or basketball. And, as McAllister points out, tennis is the only one that’s independent. And it’s the only tennis museum and hall of fame in the country besides the one in Rhode Island.

You don’t have to be a fan of tennis to appreciate this collection. One of the oldest items in the museum is a pinewood box labeled “Army and Navy Lawn Tennis” that contains a net and wooden racquets. “When lawn tennis started to spread in the late 1800s, it was first available as a box set,” White says. “When you open it up, on the inner lid are directions on how to set up your tennis court and how to play the game.” 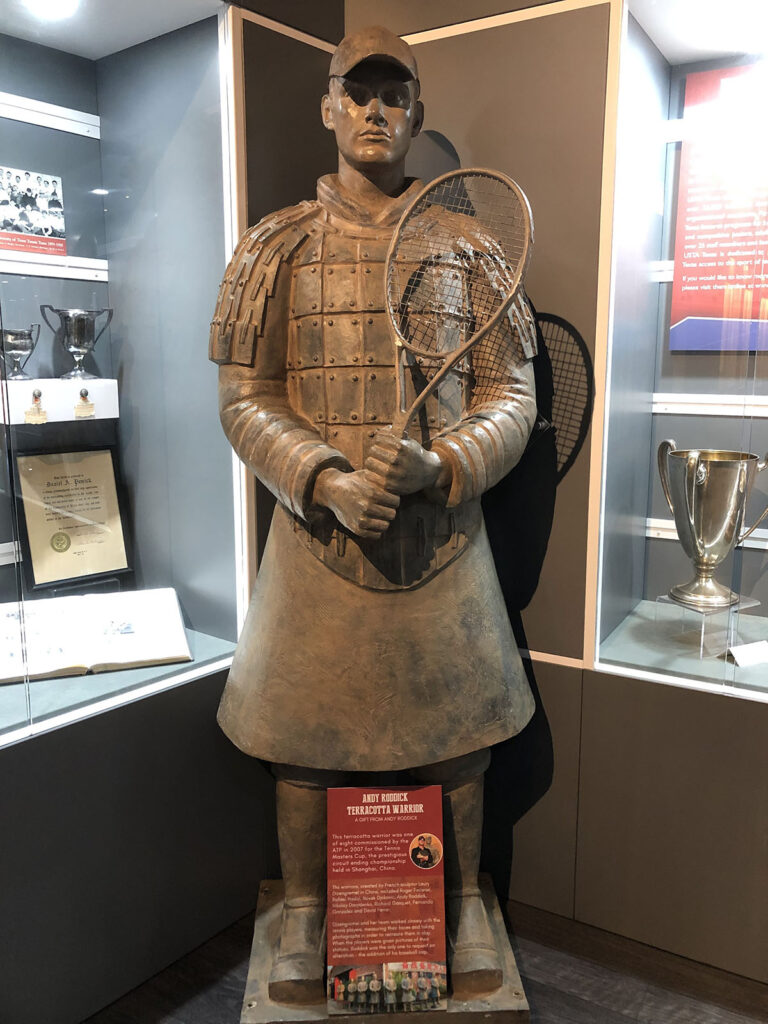 The Andy Roddick Terracotta Warrior from a tournament in Shanghai, China. Photo by Sarah Thurmond.

Perhaps the most unusual item is Andy Roddick’s Terracotta Warrior sculpture from the 2007 Tennis Masters Cup played in Shanghai, China. It’s strategically placed at the end of the first entry to the tennis museum to try to draw in people, says White. Because the tennis hall of fame is part of the larger sports complex, she says, they’re always looking for ways to engage and connect with people who may not be there for tennis. “We have to keep that in mind when we come up with our displays, and try to retain those who wander in by accident,” she says.

Among the important figures that the museum spotlights are Maureen Connelly Brinker and Randy Snow. Brinker, aka Little Mo, was raised in California and became the first woman to win a Grand Slam (all four major tournaments). Her career ended prematurely due to a horseback riding injury, but she went on to marry a Texan and launched a foundation here that started prestigious tournaments for juniors, many of whom would go on to become some of the most accomplished pro players in the game.

Snow, a native of Terrell, was a champion wheelchair player and the first paralympian inducted into the United States Olympic Hall of Fame. The museum has on display one of his wheelchairs designed with angled wheels to better maneuver around the court.

Another interesting item is the “golden set” plaque won by Bill Scanlon, an inductee who passed away earlier this year. “He achieved a golden set—which is when you win a set without losing a point—back in the early ’80s at a WCT tournament in Florida,” White says. “It had never been achieved before and he was put in the Guinness Book of Records.”

Every year, the museum inducts a new class of hall of famers and showcases donated items from their careers in a display case located in the center of a room dedicated to contributors and other luminaries of the sport. This year’s class will be inducted at the annual banquet in November, along with the 2020 class, whose induction ceremony could not take place due to COVID-19 restrictions.

As you walk through the museum, you can’t help but be amazed by how much Texas has contributed to the sport of tennis. Fortunately, the McClearys had the vision to make that known.