From a diaper-wearing Astronaut to Beyoncé and Jay-Z's elevator video, the Lone Star State goes big with love triangles 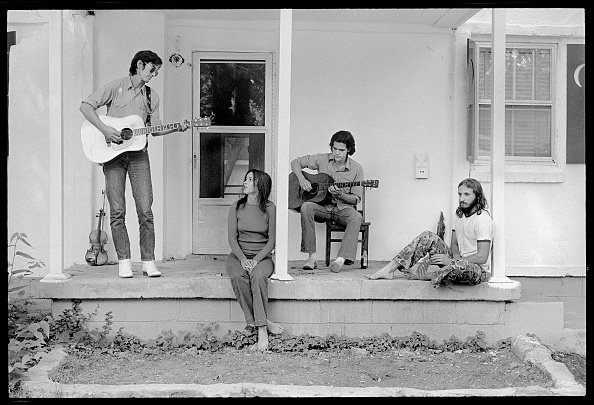 It’s often painfully true that we Texans really do things to be bigger, be it the sheer size of our urban agglomerations, the heft of our breakfast tacos, or the cultural impact of “Truck Month.” And, so, it seems that extends to our love affairs, as we’ve had perhaps more than our share of memorable ones.

Even our fiction is full of them. Take Larry McMurtry’s Lonesome Dove and its interlocking welter of love triangles from beginning to end. First, we have retired Texas Ranger Gus and Lorie, a prostitute with a heart of gold who becomes smitten with Jake Spoon. In due course of events, Gus becomes Lorie’s savior, only he still pines for the lost love of his youth, Clara Allen, who believes Gus loves his fellow Texas Ranger and cattle company partner Call too much to ever love a woman as much as she deserves. Need a scorecard yet?

We’ll spare you all the details of the B plot involving the prostitute Elmira, who leaves her husband July Johnson to reunite with her soon-to-be-executed old flame Dee Boot. While her flight across the plains results in the brutal deaths of at least seven characters, the vast majority of Texas love triangles don’t end with a body count.

No, most end in heartbreak for one and bittersweet triumph for two. Or they pop up on TV shows like Snapped or the Lifetime Movie Network, where the stories don’t have to end in murder—attempted murder or a big reveal of a former partner as a no-good, cheatin’ dog will do.

So, on this Valentine’s Day, we bring you some of the most spectacular Texas love triangles of all time.

John and Lenora Sneed and Al Boyce Jr.
As this love triangle proves, love can drive you mad. Or at least that’s what John Beal Sneed thought when he put his wife, Lenora, in a sanitarium. The year was 1911, and Sneed learned that Lenora was crushing hard on Al Boyce Jr., a former classmate of his at Georgetown’s Southwestern University. So, to solve the problem he put her away, only Boyce helped Lenora break out of the sanitarium and the couple ran off to Canada. They were found, arrested, and brought back to the United States, where Boyce faced abduction charges. When a judge dismissed the charges, Sneed took out his revenge by shooting and killing Boyce’s father.

A trial ensued and turned sensational when things got violent, with fights breaking out and four men ending up dead outside the courthouse. A mistrial was declared. But the story doesn’t end there. More blood was shed, including that of Sneed’s father’s (at the hands of a Boyce associate) and Boyce’s, whom Sneed followed to Amarillo and killed while his rival was walking by a church. Texas being the Wild West back then, Sneed was acquitted of both murders.

In a surprising move, Lenora and John Sneed stayed married and lived together for another 30 years in Dallas. Their burial plots can be found—side by side—at Sparkman Hillcrest Memorial Park.

H.L. Hunt and Frania Tye and Lyda Bunker
Per legend, Haraldson Lafayette Hunt Jr. was one of the early 20th century oilman who inspired the J.R. Ewing character of Dallas. H.L. made his fortune in oil, first with small oil fields in southwestern Arkansas. Small though they were, the oil fields produced enough so that he decided in 1925 to start a family with a Tampa woman named Frania Tye. They had four children.

There was a problem: Since November 1914, H.L. had been married to Lyda Bunker of Lake Village, Arkansas. By the time Frania discovered the man she married named Franklin Hunt was in fact H.L. Hunt, he already had seven children with his first wife, including future sports mogul Lamar Hunt. He also had become one of the richest men in America through his purchase of the massive East Texas Oil Field.

Frania lawyered up. The marriage was as annulled as much as any marriage that produced four children could be, and the kids were given trust funds per a 1941 settlement. After the implosion of his illegal marriage to Frania, a bereft H.L. was left with only one wife, Ruth Ray, a former secretary from his office in Shreveport. Before they married, they started having children. Therefore, unlike the arrangement with Frania, this was merely adultery and not bigamy, because H.L. and Ruth did not marry until 1955, a year after his first wife, Lyda, passed away. In all, H.L. had 15 children with the three women.

Clara and Davis Harris and Gail, the receptionist
If ever there was a more fitting “hell hath no fury like a woman scorned” story, it has to be the one of Clara Harris. Exactly 30 years ago today, Clara Suarez, a South American-born beauty who became a dentist in the Houston area, married David Harris, a successful orthodontist. Together, they opened a chain of dental offices and had what seemed to be a perfect marriage. Then, in 2002, Clara found out her husband was having an affair with his receptionist, Gail Bridges.

When confronted, David first denied the extramarital shenanigans, but then he confessed and swore to Clara he would end the affair. However, on the day David was supposed to break it off with Gail, Clara learned that he had other plans. With the help of an office manager, Clara was able to track down David and Gail at a Hilton Hotel—the same one that hosted the Harris’ wedding reception 10 years earlier. Seeing her husband holding hands with his receptionist, Clara grew so enraged, she went for Gail. A security guard had to hold her back. But Clara wasn’t finished. She found the romantic trysters in the parking lot, and overcome with rage, she drove her Mercedes-Benz into David and proceeded to run him over him three times. He died at the scene and Clara was arrested and charged with his murder.

In 2004, Clara was sentenced to serve 20 years in prison. She was released in 2018 and remains on parole until next February.

Beyoncé and Jay-Z and “Becky with the good hair”
Don’t mess with Houston’s Knowles sisters. It was May 2014 and the night of the Met Gala (aka “fashion’s biggest night out”). After pop music’s most famous couple posed for photographers, including an adorable moment when he pretended to propose to her again after a ring fell off her finger, Beyoncé and Jay-Z returned to their hotel. Then, all hell broke loose, and it was captured in a video of Queen B’s little sister, Solange, beating up Jay-Z.

Because of the couple’s existence at the apex of hyper-celebrity, we only got glimpses of what really went on here. Why did Solange so viciously attack Jay-Z on that elevator? Was she sticking up for big sis? Or was something else going on?

Two years later, fans seemed to get an answer with the appearance of “Becky with the good hair” on “Sorry,” the most talked-about track on Beyoncé’s sixth solo album, Lemonade. The lyrics included other clues such as, “Looking at my watch, he shoulda been home / Today I regret the night I put that ring on.”

Lisa Nowak and Bill Oefelein and Colleen Shipman
In 2004, Lisa Nowak, a married mother of three and a NASA astronaut, began an affair with a fellow astronaut, Bill Oefelein. During the couple’s three-year romance, Oefelein divorced his wife and Nowak was heading toward a separation from her husband. But things didn’t go according to plan for Nowak: Oefelein broke up with her in 2007 and began seeing another woman, Colleen Shipman.

Nowak didn’t take the breakup very well. Using a key Oefelein had given her to his place in Houston, she broke in and learned who her rival was. She also found out when Shipman was taking a return flight to Orlando. Determined to confront Shipman, Nowak set out on a 950-mile journey, bringing along a buck knife, BB gun, latex gloves, rubber tubing, duct tape, garbage bags, and a map where Shipman lived in Cape Canaveral. But what made headlines was the NASA-issued diapers she wore to avoid having to make pitstops.

In a parking lot, Nowak, disguised in a black wig and trench coat, attacked Shipman with pepper spray. Fortunately, that was as far as she got. Police arrested her, and she was charged with attempted kidnapping, battery, and burglary. Nowak pleaded guilty to a lesser charge and was sentenced to a year of probation. According to a People magazine story in 2017, Oefelein and Shipman married in 2010 and moved to Alaska, while Nowak was living a quiet life in Texas.

Guy and Susanna Clark and Townes Van Zandt
Here is one where the trio made it work. Guy Clark and Townes Van Zandt were songwriting peers and friendly rivals. Guy’s wife, Susanna, and Van Zandt were ritual conversationalists who began each day with an hourlong phone call about art, history, music, poetry, The Andy Griffith Show, the weather, and so on. Guy would pop in with coffee for Susanna from time to time. This relationship lies at the heart of Without Getting Killed or Caught, Tamara Saviano’s 2020 documentary about the trio. Susanna wrote a poem that appears in the film: “One is her soul, and the other her heart.”

“Their art is what drove the three of them,” Saviano told Texas Highways in 2020. “Townes was the yardstick for Guy. Guy felt like Townes made him a better writer. Susanna loved Townes, and Guy was very stoic, very West Texas, logical, no-nonsense. And Townes and Susanna had this very mystical thing. Townes gave her things that Guy never could have given her…Guy loved Susanna; Guy loved Townes; Townes loved them both; Susanna loved them both.”

Van Zandt passed away in 1997. Susanna and Guy remained together until her death in 2012. Guy died after a long battle with lymphoma in 2016.