Where to See Bald Eagles in Texas this Fall and Winter 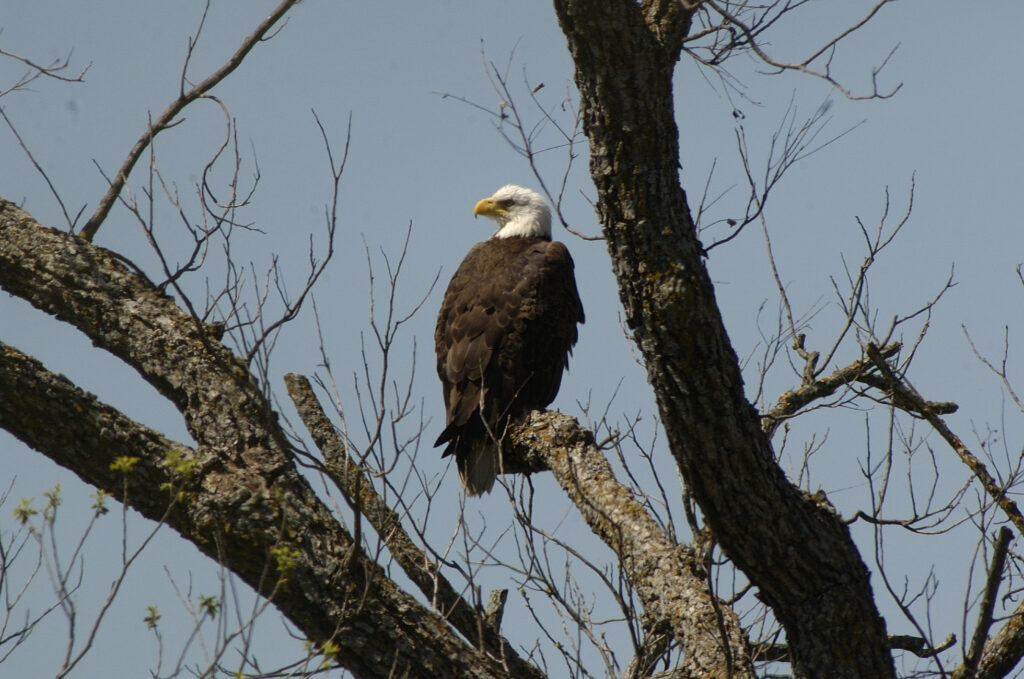 Photo by Michael A. Amador.

In early August, a staff member at Canyon of the Eagles Nature Park and Resort on Lake Buchanan near Burnet reported the area’s first bald eagle of the season. It was an unusually early sighting for the area, which typically doesn’t see bald eagles until the fall and winter.

Once an endangered species, there are now believed to be around 160 active bald eagle nests in Texas (up from just five in 1971). Constructed of large sticks and lined with softer materials such as Spanish moss, these nests can stretch 6 feet across and weigh hundreds of pounds. The birds tend to use the same nest for years—good news for people who want to spot them.

When looking for bald eagles, be sure to follow the American Birding Association code of birding ethics, which boils down to respecting birds and their habitat and exercising caution and restraint while viewing and photographing. “If eagles are changing their behavior because of your presence, you are too close,” says Trey Barron, a Texas Parks and Wildlife Department biologist.

With the caveat that wild creatures come and go as they please, no sighting guarantees, here are places where the odds are in your favor.

Famous for whooping cranes, this coastal refuge near Rockport also sporadically sees bald eagles year-round, and has a nest visible from its 16-mile auto tour loop. Eagles, including a nesting pair, also can be seen on guided tours at nearby Fennessey Ranch. Refuge trails and the auto loop open 30 minutes before sunrise until 30 minutes after sunset, seven days a week. The Visitor Center is currently closed and not collecting entrance fees.

One of the country’s largest urban wilderness preserves, this property near Houston contains wetlands forest, prairie, and marsh. Osprey and eagles arrive in September to catch fish, although the eagles prefer to steal an osprey’s catch rather than catch their own. Sightings are almost guaranteed from pontoon boat tours (offered Saturday and Sunday), or paddling the bayous on your own. Open Wednesday through Saturday from 9 a.m. to 5 p.m., and Sunday noon to 5 p.m. Entrance fees begin at $4.

In winter, look for eagles around the oxbow lakes, bayous, swamps, and streams on this sprawling East Texas preserve. Park biologists also recommend nearby bodies of water with tall trees, including Steinhagen Lake and Sam Rayburn Lake, and Cattail Marsh in Beaumont. The Big Thicket Visitor Center is open seven days a week from 9 a.m. to 5 p.m. Roads, trails, and waterways are open 24 hours. Free entry.

Popular with birders year-round, this park near Houston is home to more than 300 species of birds. In winter, eagles often can be seen around the lakes (along with alligators). Open 8 a.m. to 10 p.m. daily. $7 entrance fee for ages 13 and up.

Canyon of the Eagles

The name gives it away: Eagles live in this nature park on the shores of Lake Buchanan near Burnet. Pairs nest October to March and immature birds remain year-round. See nests or fishing birds while hiking or paddling near the shore (overnight guests can rent kayaks; day users BYO). Guests are encouraged to report sightings on eBird. There’s an $8 day-use admission (ages 11 and up). Hours are Sunday through Thursday from 8 a.m. to 9 p.m., and Friday and Saturday 8 a.m. to 10 p.m. The Vanishing Texas River Cruise also offers eagle-viewing expeditions on Lake Buchanan mid-November through February.

Spot eagles year-round on this refuge near Sherman, including in trees along the shoreline of Lake Texoma from Wildlife Drive. Refuge manager Kathy Whaley says the bird’s white heads are especially visible once trees lose their leaves. She suggests also looking near Big Mineral Day Use Area, from Egret and Tern Roads, and below Denison Dam. Open sunrise to sunset, 365 days a year, and it’s free.

On this North Texas property, Park Ranger Rob Smith says people frequently see eagles in early summer feeding along a 5-mile earthen dam. When staff mows the dam in late May or early June, the birds kettle, or circle in thermal updrafts, to pick off stirred-up field mice, snakes, and other prey. Leave your pets at home when you visit. The property is open daily from 7 a.m. to 7 p.m.; after Nov 1., hours are 7 a.m. to 5 p.m. $5 entrance fee.

Eagles and osprey hang out in this park northeast of Houston during winter. Its 82-foot John Jacob Observation Tower provides views of the wetland, lake, a restored prairie, the Houston skyline, and San Jacinto Monument—and, on occasion, eagles. The park is free and open Monday through Friday from 8 a.m. to 5 p.m., and Saturday and Sunday from 8 a.m. to 7 p.m.

Great horned owls: For more than a decade, a pair of these impressive birds have nested at Austin’s Lady Bird Johnson Wildflower Center, typically arriving in late February, with owlets hatching in March and fledging in April.

Peregrine falcon: One of these birds has a nest box at the top of The University of Texas Tower in Austin. Follow her via live cam.