Good food and fast friends at the Castell's center of activity

Written by: Michael Barr
Photos by: Will van Overbeek

Written by Art Williams, Photographs by Will van Overbeek | From the August 2017 issue | Updated: August 8, 2017 | Filed Under: detourTRAVEL 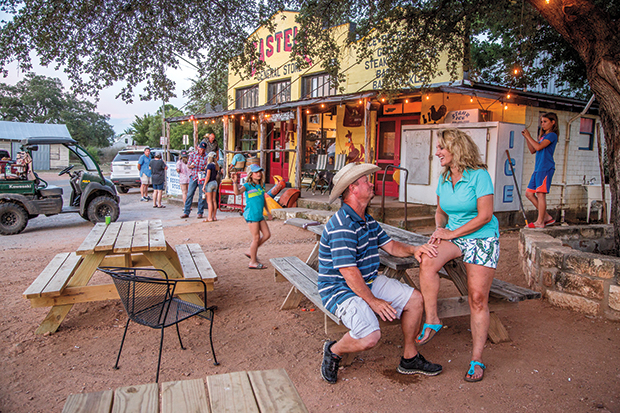 Along with comfort food, live music, and community events, the Castell General Store offers kayak rentals for patrons interested in paddling the nearby Llano River.

It’s a Saturday afternoon, and mesquite smoke from the barbecue pit perfumes the Castell General Store, a weathered old building that houses a grocery business, café, and saloon. The store is the center of activity in Castell, a tiny town hidden away in the Texas Hill Country west of Llano. Early in the week the store is quiet and unassuming. But as the weekend approaches, the place comes alive with food, music, and amusements that draw a range of visitors—from rugged outdoorsmen to those who prefer a bar stool, air-conditioning, and a plate of good barbecue.

Getting to Castell takes time and patience. At the square in Llano, I turn west on Ranch Road 152 and drive 18 miles on a crooked two-lane blacktop that roughly parallels the Llano River, just out of sight to the north. About the time I’m convinced I took a wrong turn somewhere, I pass St. John Lutheran Church and the adjacent cemetery. Finally I round a corner and see the sign that says Castell. I carefully negotiate a hairpin turn, go past the Texas Ranger marker and the post office and find my destination: the Castell General Store.

Cars, pickups, motorcycles, and four-wheelers crowd the parking area in front of the store. Like other Johnny-come-latelies, I find myself relegated to a parking spot in the mesquite flat across the road.

Wasting no time, I fall in line at the barbecue pit and choose some brisket and beef ribs, then follow the leader inside to pay Jennifer at the bar. After selecting a beverage and loading up with sides, including beans, pickles, jalapeños, and a salad made of pasta and coleslaw, I squeeze into a seat against the wall and dive in. Quarters are close. Dining is a community event at the Castell General Store.

Randy Leifeste, co-owner of the store and its quirky goodwill ambassador, works the crowd. “I keep things loose around here,” he tells me with a deadpan look that is both disarming and mischievous. Thanks to Randy, no one in Castell is a stranger for long. “My job,” he says, “is to be sure everyone has a good time.”

In addition to the Castell General Store, Randy owns a ranch just across the Llano River that has been in his family since the mid-19th century. Young idealistic freethinkers from Germany established several communal settlements along this stretch of the Llano River in the 1840s. Today only Castell remains.

The building that houses the Castell General Store dates to 1927. First constructed as a blacksmith shop, it has served various purposes over the years, including a gas station, a garage, and a café. Randy bought
the building 10 years ago after leaving a career with a Houston oil company.

Six tables—no two alike—fill the dining area along with a motley assortment of wooden and metal chairs. The back room, until recently a storage area for sacks of feed, seats another 30 or so. Rolls of paper towels substi-tute for napkins.
The floor is bare concrete. Beer signs adorn the walls, which are stained and dulled by time. Sheets of rusty tin cover the ceiling.

The bar in the back corner of the store is crowded two deep on this Saturday afternoon. An old bounce-back shuffleboard table occupies the opposite corner along with Randy’s stuffed pet rooster Cockaroo. An 8-foot blue marlin is mounted over the kitchen door, and a signed picture of Mickey Mantle hangs in the middle of the wall. 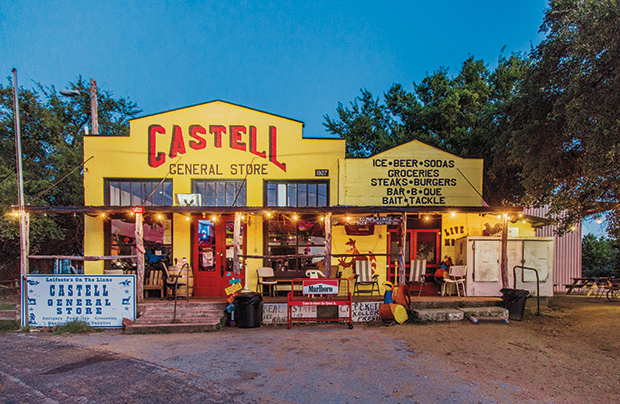 The Castell General Store, whose building dates to 1927, serves as the social hub of Castell.

Televisions are tuned to sports or The Weather Channel but almost never to the news. The problems of the world have no place in Castell.

“People come here to get away from that stuff,” Tom at the next table tells me.

There are a few shelves stocked with bread, beans, snacks, and other deer-hunter staples. Koozies, caps, and T-shirts with the Castell logo occupy some of the prime space once used for groceries—a sure sign this once unknown village is making a name for itself.

And for a small Hill Country town, Castell has a lot to offer. You can pitch washers in the shade of an oak tree or rent a kayak at the store and paddle the Llano. The 5-mile trip down the river takes three hours unless you stop to fly fish for Guadalupe bass. On a triple-digit summer afternoon, you can take a cool dip in the Llano or just hang out at the air-conditioned bar.

But food is the big draw at Castell General Store. For lunch on Tuesdays, Thursdays, and Fridays, the kitchen turns out juicy hamburgers on homemade buns. The Wednesday menu varies. On Saturdays, it’s barbecue at lunch and burgers in the evening. On Sundays, the kitchen serves rib-eye steaks with all the trimmings. Many weekends offer live music, and there’s never a short supply of laughter, tall tales, and social incorrectness.

“This place was a ghost town 10 years ago,” Randy says. “Now we have people coming from all over. We had 450 people here for the Testicle Festival in May. We had a six-piece band and gave away $1,750 in prizes in the washer pitching contest.”

While most visitors come to Castell for a day or an evening, others stay awhile. There are 10 B&Bs in and around Castell ranging from a large, but basic, house next to the store (starting at $160 per night) to cozier and swankier country cottages (some starting at $350 per night).

“We started the Testicle Festival not knowing how it would turn out, but everybody had a ball,” Randy says with a grin. “Seriously, if you want a four-star restaurant go to Austin, but if you want to have fun, come to Castell.”