Old West, wine and fast cars intersect at this crossroads

Written by: Dale Weisman
Photos by: Will van Overbeek

Written by Lois Rodriguez, Photographs by Will van Overbeek | From the February 2015 issue | Updated: February 6, 2015 | Filed Under: TRAVEL 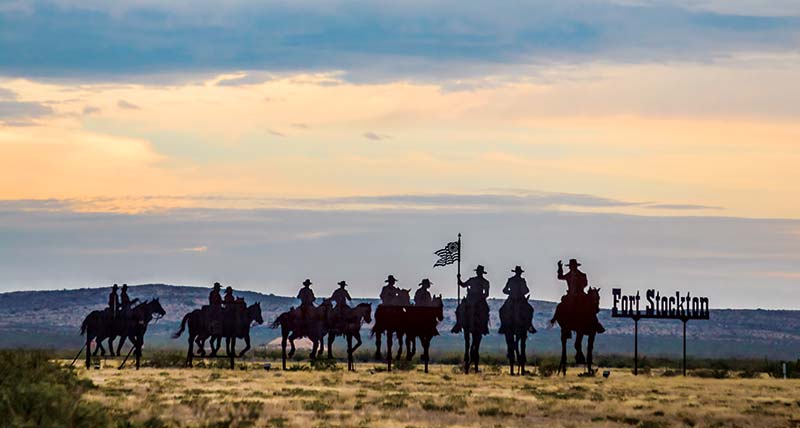 For decades, I’ve passed through Fort Stockton on countless road trips out west, stopping for gas and great Tex-Mex—and to pay homage to the town’s super-sized roadrunner mascot, Paisano Pete. Over the years, I’ve grown to appreciate the town as more than a pit stop. With its proudly preserved frontier fort and colorful Old West heritage, Fort Stockton sweeps me back to an era when Comanches, Buffalo Soldiers, pioneers, ruthless lawmen, and feuding gunslingers crossed paths at this junction of old West Texas.

With its proudly preserved frontier fort and colorful Old West heritage, Fort Stockton sweeps me back to an era when Comanches, Buffalo Soldiers, pioneers, ruthless lawmen, and feuding gunslingers crossed paths at this junction of old West Texas.

The arching “Historic Fort Stockton” sign beckons me down Main Street, where I discover a Mayberry-like downtown. Fort Stockton’s historic district straddles a sides of Main Street, about a mile-and-a-half south of Interstate 10. Amid historic sites, such as the Grey Mule Saloon and the Annie Riggs Memorial Museum, you’ll also find interesting shops like Bella Terrazza, a cornucopia of Mexican and Western home décor and talavera pottery. Not far from the historic district, Fort Stockton abounds with some of the best Tex-Mex west of the Pecos at downhome eateries like Tacos O.J., Alfredo’s, La Duena, and BienVenidos.

At the intersection of Main Street and Railroad Avenue, the Fort Stockton Visitor Center interprets local history with various exhibits and provides maps for self-guided driving tours. The visitor center occupies the original Kansas City, Mexico, and Orient Railway’s 1911 depot, an architectural gem with graceful porticos and a red-tile roof. The surrounding grounds showcase Fort Stockton’s heritage with a sculpture garden, interpretive displays, Santa Fe locomotive cars, and a burbling waterfall depicting Comanche Springs, a now-dry network of springs. A windmill and pump jack recall the town’s roots in the agricultural and petroleum industries, while the neighboring renewable energy park showcases the turbines and solar panels of the region’s contemporary green energy industry.

Another photogenic subject, poised in mid-stride, stands at the corner of Dickinson and Main: Paisano Pete. The paisano—a roadrunner nickname, meaning “countryman” in Spanish—rises 11 feet tall and stretches 22 feet long, beak to tail. Billed as the world’s largest roadrunner when erected in 1980, Pete lost his No. 1 spot in 1993 to a roadrunner twice its size near Las Cruces, New Mexico. Paisano Pete, however, still reigns as one of the Southwest’s most beloved, oft-photographed roadside attractions.

Historic Fort Stockton and its namesake community owe their existence to Comanche Springs, prolific springs on the legendary Comanche Trail. The watering hole provided a welcome oasis for Native Americans, soldiers, postal carriers, merchants, and settlers traversing the arid West. Comanche Springs once gushed more than 60 million gallons of water a day. Sadly, the springs went dry in the 1950s due to excessive groundwater pumping for agriculture.

To safeguard Comanche Springs for travelers, the U.S. Army established Camp Stockton in 1858, naming it for Lieutenant Edward Dorsey Stockton, a West Point officer who had died in San Antonio in 1857. Nearby, the 1912 Pecos County Courthouse is flanked by shady Zero Stone Park, which is home to a limestone marker used by military surveyors and mapmakers as a reference point when they laid out the military post.

After abandoning the fort to Confederate soldiers during the Civil War, the U.S. Army re-established Fort Stockton in July 1867. Garrisoned by four companies of the 9th U.S. Cavalry, Fort Stockton was home to African-American enlisted men known as Buffalo Soldiers. 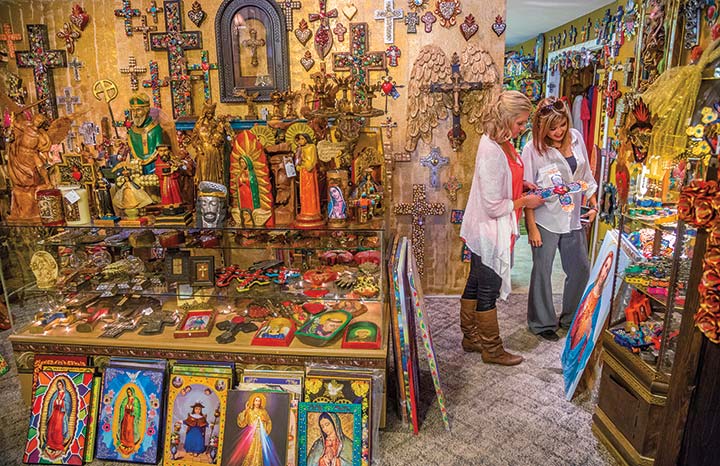 “Back in those days, there were no trees or brush around the fort, just wide-open prairie,” says Robert Preston, a reenactment volunteer who often leads tours of the fort. “You could see the dust of approaching riders from 10 miles away.”

The U.S. Army abandoned the fort for good in 1886, when the frontier and Indian Wars moved west beyond Texas. The community that had sprung up around the fort in the late 1860s lived on, though, nourished by Comanche Springs. Originally called St. Gall by the settlement’s founder, Peter Gallagher, the town was renamed Fort Stockton in 1881.

Remnants of the old military fort have endured. Managed by the Fort Stockton Historical Society, Historic Fort Stockton features four original buildings (the guardhouse and three officer’s quarters), replicas of enlisted men’s barracks, and the parade grounds. The fort’s oldest structure is the guardhouse, built in 1868 of quarried limestone. When you enter the guardhouse dungeon, imagine the tribulations of prisoners in solitary confinement, shackled in irons and subsisting on hardtack biscuits and water.

A few blocks south of the fort, the Annie Riggs Memorial Museum provides a window into Fort Stockton’s turn-of-the-century past. Opened in 1901 as the Koehler Hotel, the adobe brick building is a prize example of Territorial-style architecture. With its gingerbread trim, wrap-around porches, and wide verandas, the 13-room hotel reflected Victorian elegance on the frontier. Thick adobe walls and 14-foot ceilings kept guest rooms cool. Period advertisements touted “the coolest rooms in town and old-fashioned buttermilk biscuits.”

How the hotel took on the Riggs name echoes the lurid drama of an Old West dime novel. In 1901, Annie Riggs, who was married to notorious gunslinger Barney Riggs, filed for divorce after years of abuse. Later that year, Annie’s brother-in-law shot Barney outside the Koehler Hotel, believing he was about to pull a gun. Barney died inside the hotel, and his estate went to Annie, enabling her to buy the Koehler in 1904. She renamed it the Riggs Hotel and managed the inn until her death in 1931. In 1955, the Riggs family donated the building to the Fort Stockton Historical Society, which transformed it into the Annie Riggs Memorial Museum, now brimming with frontier relics and memorabilia like period furnishings and clothing, photographs, kitchen items, Native American artifacts, fossils, and a ghost or two.

Across the street, the storied Grey Mule Saloon enjoys a second life as a convivial wine bar. Opened as a saloon in the 1880s, the adobe building is now the tasting room for Texas’ largest winemaker, Mesa Vineyards. Nearby landmarks include the Comanche Springs pavilion and swimming pool, built in 1938. The pool still opens in the summer, and each July, the city holds its annual Fort Stockton Water Carnival there, an extravaganza of water ballet, music, and dancing that began in 1936 when Comanche Springs still flowed.

Surrounding Pecos County obliges vista seekers with nearly 5,000 square miles of plateaus, mesas, and mountains. The scenic drive from Fort Stockton south to Sanderson on US 285 draws sightseers as well as racing enthusiasts each April for the Big Bend Open Road Race. The 118-mile round-trip route is tough and unforgiving, much like the Trans-Pecos frontier that tested the mettle of Fort Stockton soldiers and pioneers 150 years ago.