Enjoy Wine in the Piney Woods at Kiepersol Estates in Tyler

A wooded retreat in East Texas

Written by Art Williams, Photographs by Kevin Stillman | From the February 2015 issue | Updated: November 5, 2018 | Filed Under: made in texasTRAVELWhere to Stay 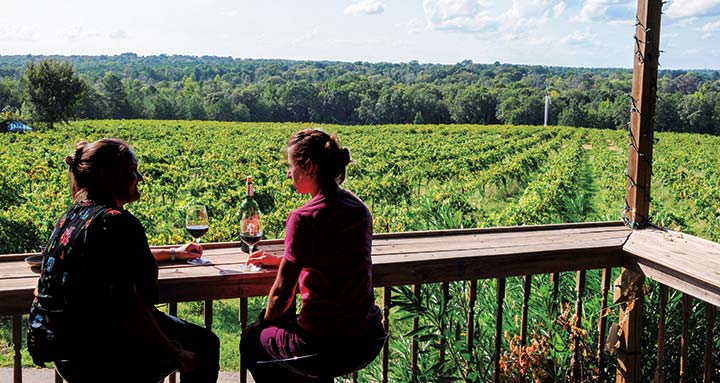 While the Texas Hill Country and the Panhandle have grown popular for wine touring, I’m here to make a case for a culinary-viticulture escape to the East Texas Piney Woods.

My recent jaunt to Kiepersol Estates, scarcely a two-hour drive east of Dallas, confirmed what folks around Tyler have been saying for more than a few years: This family-run, made-in-Texas operation offers the right ingredients for a peaceful, pleasing weekend.

South African native Pierre de Wet worked as a farmer and a handyman in California in the early 1980s before moving to Texas to take a job near Tyler. Texas grew on him, and in the late 1990s, Pierre and his daughters opened a winery with a bed-and-breakfast inn and restaurant, naming it for a family homestead back in South Africa. Today, their enterprising company also encompasses an RV park and a distillery that released its first vodka, rum, and bourbon in spring and summer 2014.

Before touring the winery and checking into my sumptuous room at the B&B, I joined a couple from Shreveport on one of the daily distillery tours. The affable Pierre, usually in his signature cowboy hat, leads many of the tours at Kiepersol himself, offering sips of various spirits and sharing stories behind their production. Taking a cue from some French vodka distillers, Kiepersol makes its version from grapes grown on the estate, while corn for the bourbon comes from Lubbock.

A few steps down a stone-lined walkway, past an expansive view of Kiepersol’s 63 acres of vineyards planted with sangiovese, cabernet sauvignon, merlot, and syrah grapes, the entrance to the winery revealed another happy crowd of visitors. Guests shopped for wine accessories and queued up at the front counters for tastes of some of Kiepersol’s 20-plus wines. Others bought wine by the glass or bottle to while away the afternoon with a platter of cheese at one of the tasting room’s long tile-topped tables.

A dozen of us followed Marnelle de Wet Durrett, Pierre’s eldest daughter and chief winemaker, on a half-hour winery tour. Marnelle told us that Kiepersol makes its wines entirely from grapes grown on site and produces 15,000 cases annually. After she showed us the machinery that crushes grapes and separates the skins and seeds from juice, we visited the tank room, where Pierre offered us tastes of a luscious malbec rosé from a spigot on the side of a stainless-steel tank.

Kiepersol’s popularity in the local community reveals itself especially in the spring, when Pierre and his family “wake” the vines for the season—a ceremonial term Pierre assigns to the spring budding time—and also in fall, when the vines are put to rest for winter. Last October, about 3,000 people came out to celebrate the season’s end, with a mariachi band serenading the vines’ send-off. On the Saturday prior to Good Friday—that’s March 28 this year—there’s a similar ceremony to celebrate the waking of the vines again.

After the tour, I found a spot in the restaurant’s bar, which reminded me of a cozy wooden tavern somewhere in the English countryside. A very generously portioned Caesar salad with lots of juicy grilled chicken was the perfect midday meal, served with crusty, warm sourdough bread that Pierre has flown in from San Francisco.

A large, beautiful piece of sea bass, crusted in crushed pistachios and sautéed, arrived in a tart white wine-butter sauce. Every table around mine ordered the molten chocolate cake, Kiepersol’s signature dessert, but it was just too much for me to fathom. Instead, I sipped a glass of Texas Tempranillo, one of Kiepersol’s extraordinary red wines.

My comfortable room, fortunately, waited just a few steps from the dinner table, as Kiepersol’s B&B sits attached to the restaurant. There, I drifted off in a huge, comfortable bed and awoke to gaze out the windows at the Piney Woods and rolling vineyards.

Kiepersol’s staff often point guests to golf, spa, festival and shopping experiences nearby, but I was fulfilled simply by finding a quiet place in the forest with fine wine to drink delicious food to enjoy, and new friends to keep me company.