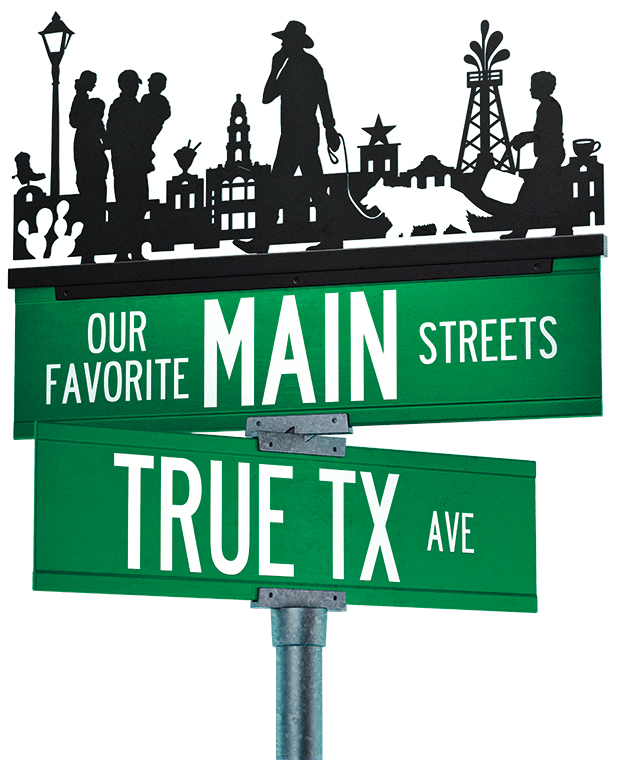 When you sit at the bar at The Liberty Bell on the brick-paved Main Street in Nacogdoches, many things could happen. You could strike up a conversation with locals about their homemade apple-pie moonshine or where to find Caddo Indian mounds on the back road to Crockett. You could saunter outside to Cole Art Center, formerly an opera house where the Marx Brothers once performed. And while you’re at it, you could stop in to the Visitor’s Center and ask the informed fellows behind the counter if Nacogdoches is really and truly the oldest town in Texas.

Seawall Boulevard: History and recreation along the Gulf of Mexico

Shopping and Strolling: Boutiques, antiques stores, and galleries for a perfect souvenir

Oh, What a Night: These streets across Texas provide some of the best food, music and drinks

Eats on the Street: These streets across Texas provide some of the best eats

Because, while digging into your tacos and tequila at The Liberty Bell, you are in the midst of a phenomenon happening in small towns across Texas. You are part of a movement back to Main Street, where a renewed appreciation for local heritage and historic architecture, combined with an influx of new businesses, is igniting a spark of fresh energy. And by the look and feel of historic main streets like those in Nacogdoches, Bastrop, Alpine, Boerne, and Georgetown, this fresh energy is infectious.

Just ask Kati Kennedy, the owner of The Liberty Bell, who books touring bands that fill the house on weekends. “Before I opened this place, I was driving all the way to Houston for dinner and music,” Kennedy says. “There were other people doing that too, so I knew there was a market. And now I feel like The Liberty Bell has become Nac’s living room.”

Kennedy is not alone in feeling fortunate to live and work on a Texas main street. Across the state in the college town of Alpine, Daniel and Jessie Browning opened Plaine, a coffee shop and laundromat, after moving from Austin to raise their children in West Texas. Over a few years, Plaine, which is located on Alpine’s central thoroughfare of Holland Avenue, has grown into a community hub. Plaine complements a bustling strip that’s home to the 1928 Holland Hotel, numerous art galleries, and the independent Front Street Books. 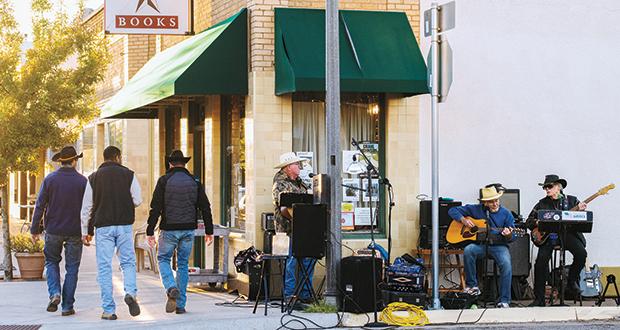 The scene around Front Street Books on Holland Avenue in Alpine.

“There are definitely things happening here on Holland. Things really kicked off with the renovation of the Granada Theater and then the opening of the Saddle Club,” says Daniel, referring to entrepreneur Karen Travland’s redevelopment projects and their influence on Holland Avenue’s vitality.

Sean and Abbie Neighbours, two Marine Corps veterans with Texas roots, moved from Nebraska to Bastrop in 2015 and bought Cripple Creek Wine and Gifts on Main Street. Now, their three daughters are growing up in the comfort of a culture where they know almost everyone in the neighborhood. They chat with customers in the wine shop, run over to the Main Street Bakery to “help” the owner there, hang out at the Back Porch Ceramics art studio across the street, or walk down to the library.

“It’s a really close-knit community on Main Street, and so laid-back,” Sean says. “The payoff of running our own business on Main Street is huge, and not just in financials, but in the mental rewards, as far as your self-worth goes.
I think, ‘This is me, this feels like me.’” 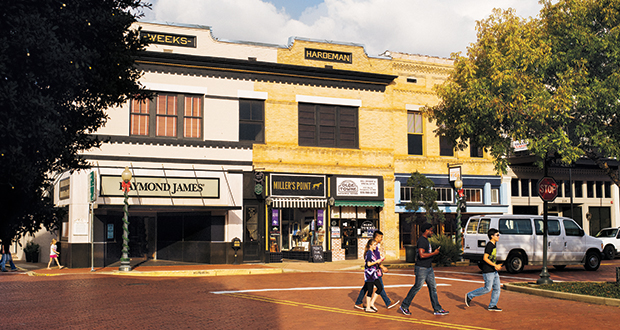 A sense of community is central to Texas’ thriving main streets. Just like The Liberty Bell has become Nacogdoches’ living room, revived historic districts across Texas offer a satisfying dose of human connection, an antidote to being stuck at a computer screen all day. Unlike the planned get-togethers of city life, friends on main streets bump into one another, spontaneously stop by, or make new friends just by sitting at the counter of a restaurant or bar. During my hour-long visit with the Neighbours at Cripple Creek, where there are always bottles of hard-to-find wines to sample and freshly made coffee to sip, several people stopped in just to say hello.

And while many of the people launching new main street businesses are in their 20s and 30s, they respect the hard work their predecessors have done to preserve these historic areas. “We don’t want to change the established culture,” says Sean, who is 37. “We like the small-town feel and the way things are in Bastrop. We also know that millennials want certain things. We don’t want to walk into big-box stores where you have no interaction. We want to be around real people and have a voice.”

And apparently, millennials want history, too. In Georgetown, Danny Solano and Cat Lawson, young newlyweds, recently opened a clothing shop by the historic square. They say the local regard for history encouraged their site selection. In their home state of California, they had seen main streets fall into disrepair and fizzle out, both architecturally and economically. Solano and Lawson even named their edgy little boutique Sincerely Yours 1848, a tribute to the City of Georgetown’s old slogan and the year the town was founded.

“The biggest reason we chose to open up here is that people take care of this part of town,” Solano says. “In downtown Georgetown, they understand the value of history. And the more you get involved, the more you see how active the community is. Plus, people are so welcoming; they are happy to have younger people here.” 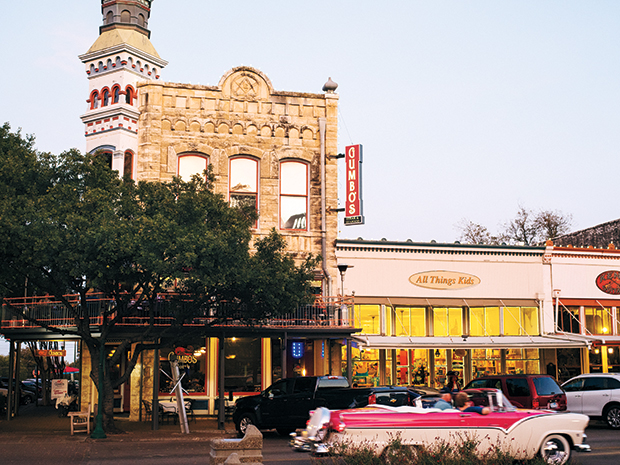 Solano and Lawson’s shop is right around the corner from 600 Degrees Pizzeria and Drafthouse. When I stop in for a slice and a beer at 3 p.m. on a Thursday, the place is buzzing. Kids on the street peer in the kitchen window to watch muscular guys in aprons toss pizzas in the air. Locals sip beer and eat slices of pizza so large they flop over their plates. A sign over the door says “Friends Meet Here.”

As with all of the main streets I visited, Georgetown’s lively present is inseparable from an appreciation for the town’s past. At the historic Williamson County Courthouse on the Georgetown Square, a newly-erected statue honors Dan Moody, a former Texas governor who’s best known for being the first lawyer to successfully convict members of the Ku Klux Klan for aggravated assault. The 1923 trial gained national attention and heralded a turning point in emboldening people to stand up to the KKK.

Danelle Houck, an educator at the Williamson Museum across from the courthouse, speaks with ease and admiration about the architectural styles and renovations of the Georgetown Square and courthouse, as well as the human stories that unfolded there. She can rhapsodize about the egg-and-dart molding that typifies the 1910 Beaux-Arts style of the museum, the day that the 11-foot Lady Themis Statue was placed atop the courthouse after its restoration in the mid-2000s, and about all of the ghosts and shootouts that enliven the square’s history (paranormal crews have identified at least six active ghosts at the museum). And this is another reason people want to be on main streets—because these buildings tell stories. Among them, we feel more connected to our past.

In Boerne, Raymond and Lisa Lunsford understand the importance of connecting to our past through caring for an architectural gem. Over the past few years, the couple has dedicated themselves to reanimating the 1884 Dienger Building on Boerne’s Main Street. In collaboration with designer Michelle Ernst, they have renovated the abandoned, two-story landmark and transformed it once again into a community asset—a bookstore, a boutique, a café that serves a tasty club sandwich, and an events center. They’ve considered every detail, from the hexagon tiles in the café to the Filson boots and other finery in the boutique.

The Dienger Trading Co. is the grandest building to preside over Boerne’s Main Street, recently rebranded as “The Hill Country Mile.” This stretch of shops and restaurants loosely follows the cypress-lined Cibolo Creek, where families push strollers and friends stop in at hangouts like the Cibolo Creek Brewery. 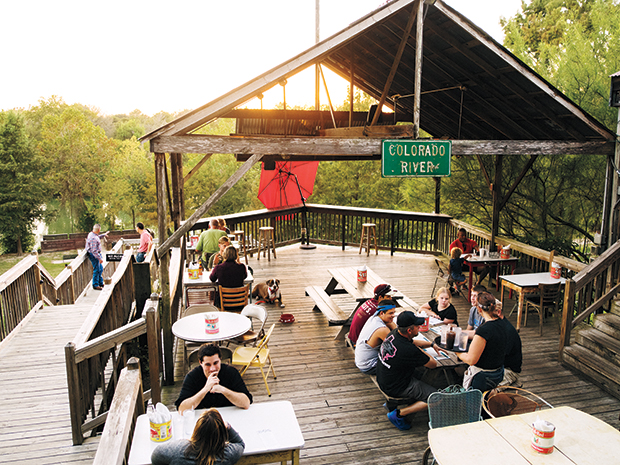 It’s clear that Boerne’s Main Street, as well as those in Georgetown and Bastrop, owe at least part of their latest surge of energy to the growth of nearby cities like San Antonio and Austin. City folks keep these smaller towns’ main streets hopping on the weekends and help support restaurants like Peggy’s on the Green in Boerne, the latest project by chef Mark Bohanan of Bohanan’s Prime Steaks and Seafood in San Antonio.

Across the state, small-town main streets are gaining momentum. Boerne’s Ye Kendall Inn, which is the home of Peggy’s on the Green, has just expanded to open a contemporary offshoot, The William, a New Orleans-style row of sleek modern rooms all connected by a wraparound second-story porch. In Alpine, the shuttered Crystal Bar on Holland Avenue is getting a facelift and is expected to reemerge later this year. This spring in Nacogdoches, the restored Fredonia Hotel, located two blocks off of Main Street, will open as a boutique hotel with a mid-century-modern bent. In Georgetown, new shops are opening on the square this year, including Mesquite Creek Outfitters, an outdoor-clothing shop with a bar, and Noble Sandwich Co. And in Bastrop, the rustic Neighbors Kitchen & Yard—a short walk from Main—keeps drawing live-music lovers to the banks of the Colorado River.

These towns represent the renewed relevance of main streets across the state. As entrepreneurs of all ages embrace the value of historic places and architecture, we flock to these central gathering places, drawn by our shared desire for human connection and enterprises with soul. Texas main streets are now, more than ever, very good places to be.