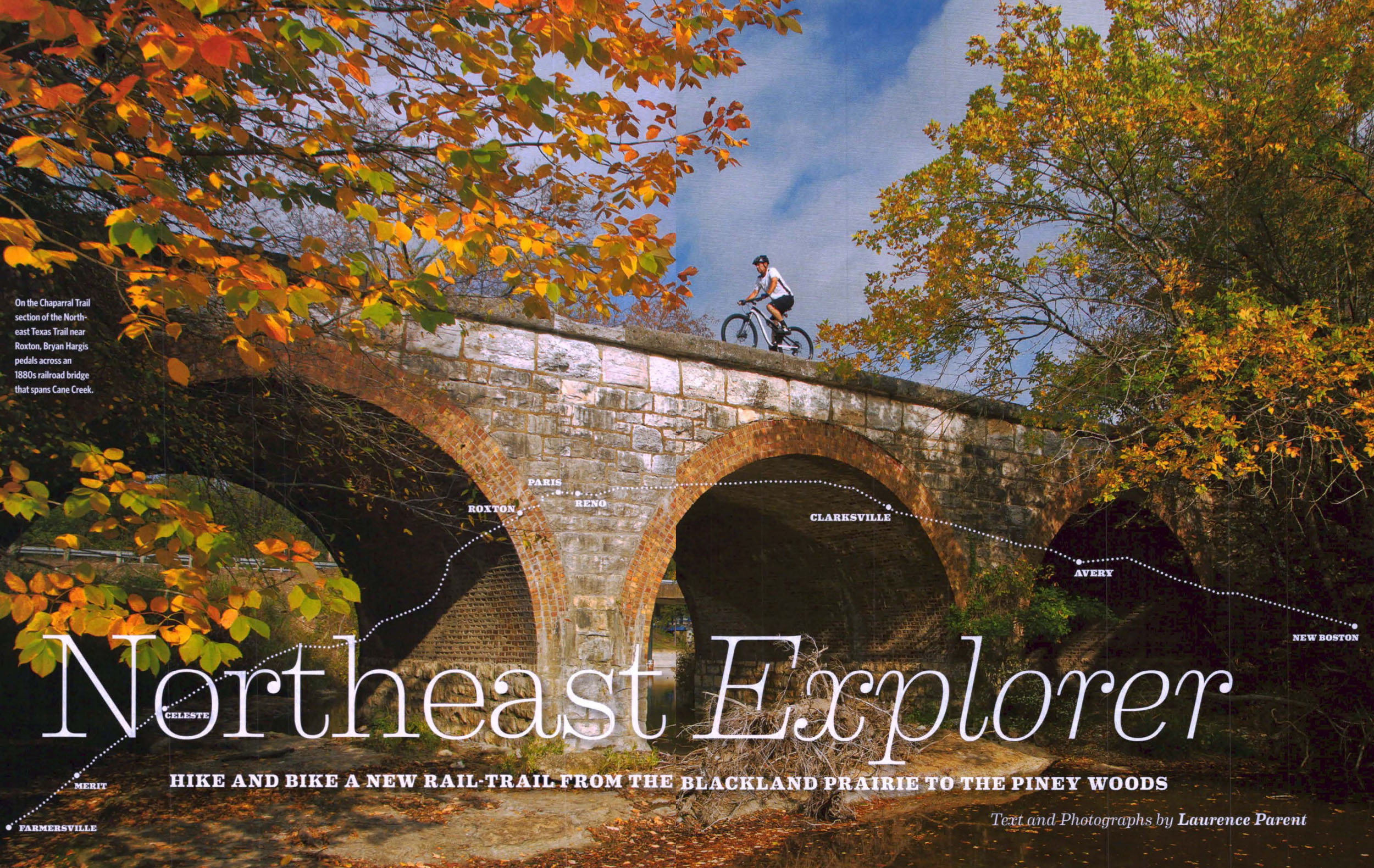 AFTER RUNNING ACROSS A BRIEF STORY on a new rail-trail in northeast Texas, I had to investigate. The 130-mile trail open to cyclists, runners, walkers, and even equestrians-extends from Farmersville in eastern Collin County to New Boston just west of Texarkana. It travels through seven counties and 19 rural towns. Some sections are paved, some are gravel, and some are the original rough railroad bed. As someone who has written a Texas hiking guide and taken photographs all over the state, I wondered why I’d never heard of it.

It turns out that developing a project like this is a slow process. The idea for the Northeast Texas Trail began in the 1980s when the Santa Fe Railroad discontinued service on the tracks. In such instances, sometimes the right-of-way is sold to adjoining landowners and the corridor is lost. Other times-including this one—it’s “rail-banked;’ and the company sells, donates, or leases the right-of-way to a qualified public or private entity that will maintain it as a possible future rail corridor. The corridors are often converted to recreational trails through public funding and donations. Much of the work is done by volunteer groups such as the Northeast Texas Trail Coalition. Nationally, more than 1,700 rails-to-trails projects have been established with more than 20,000 miles of trails. 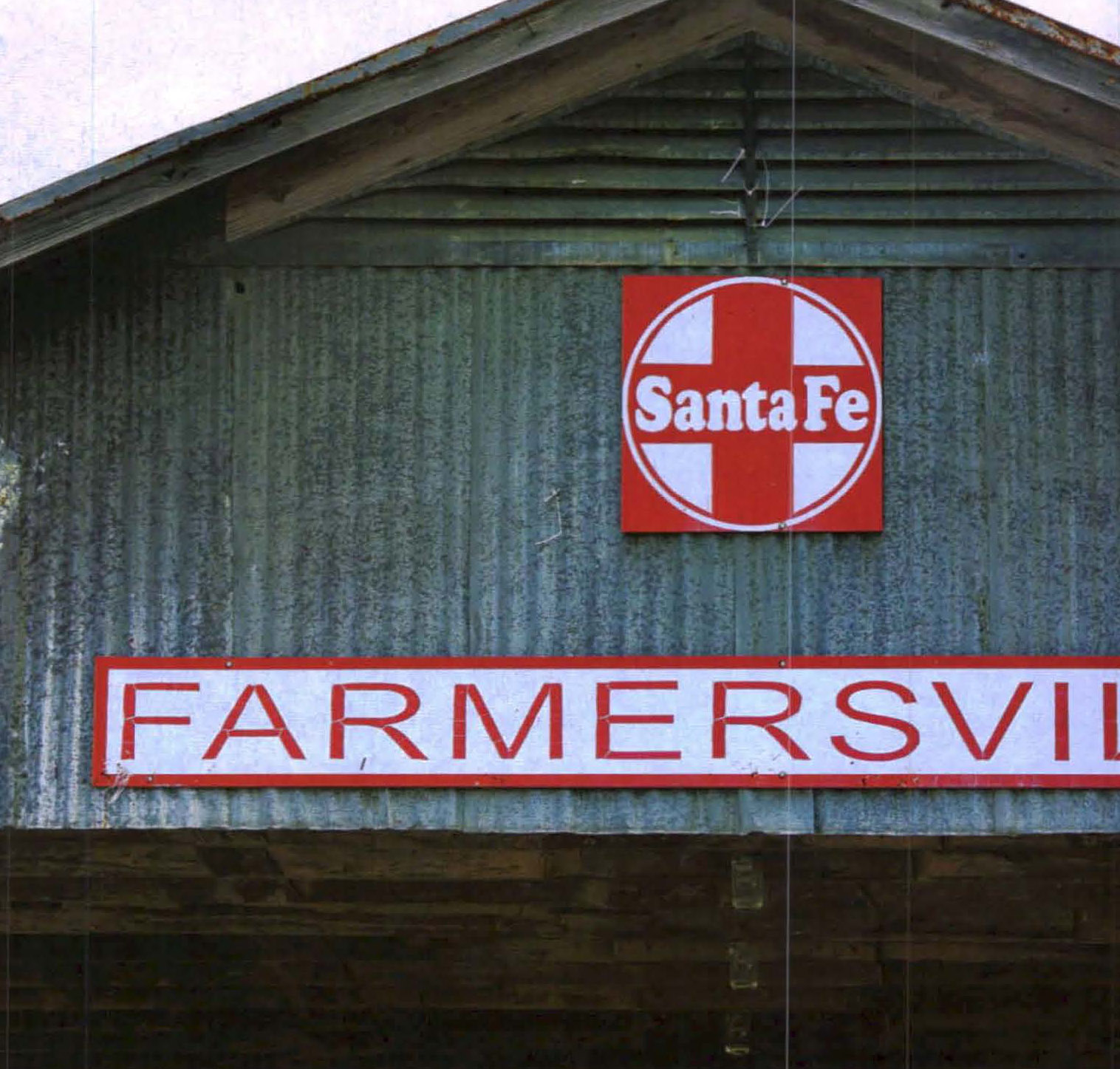 The conversion of the old railroad corridor to a recreational trail began slowly in 1995, starting in Paris in the middle and Farmersville on the west end. New Boston has recently been developing the trail from the east, and other towns along the route are following suit. To learn more, I headed to the Paris Junior College trailhead to meet Earl Erickson, one of the trail’s most prominent long-term boosters. Earl’s advocacy for a safe place for cyclists and walkers is personal, as he lost a leg and nearly his life when he was hit by a car while bicycling in Houston some years ago.

Earl unloaded his recumbent bicycle, snapped on a helmet, mounted up, and headed down the trail. I climbed on my bike and followed him down the paved path as it ran east through a shady tunnel of trees. The trees not only provide shade-a good thing in Texas’ climate-but also block much of the wind from hitting trail-users on blustery days. “A rail-trail in Texas is a linear park:’ said Earl as he coasted along beside me.

It was late afternoon and lots of people were using the trail on its route through Paris-cyclists, walkers, runners, and people pushing baby strollers. We turned south onto a short paved side trail that led through lush bottomland woods and across a 1948 steel-truss bridge (moved here from the Harmon area) over Big Sandy Creek to the large Paris sports complex and the Love Civic Center. Earl then led me back to the main trail, and we continued east, shaded by the almost continuous tree canopy. 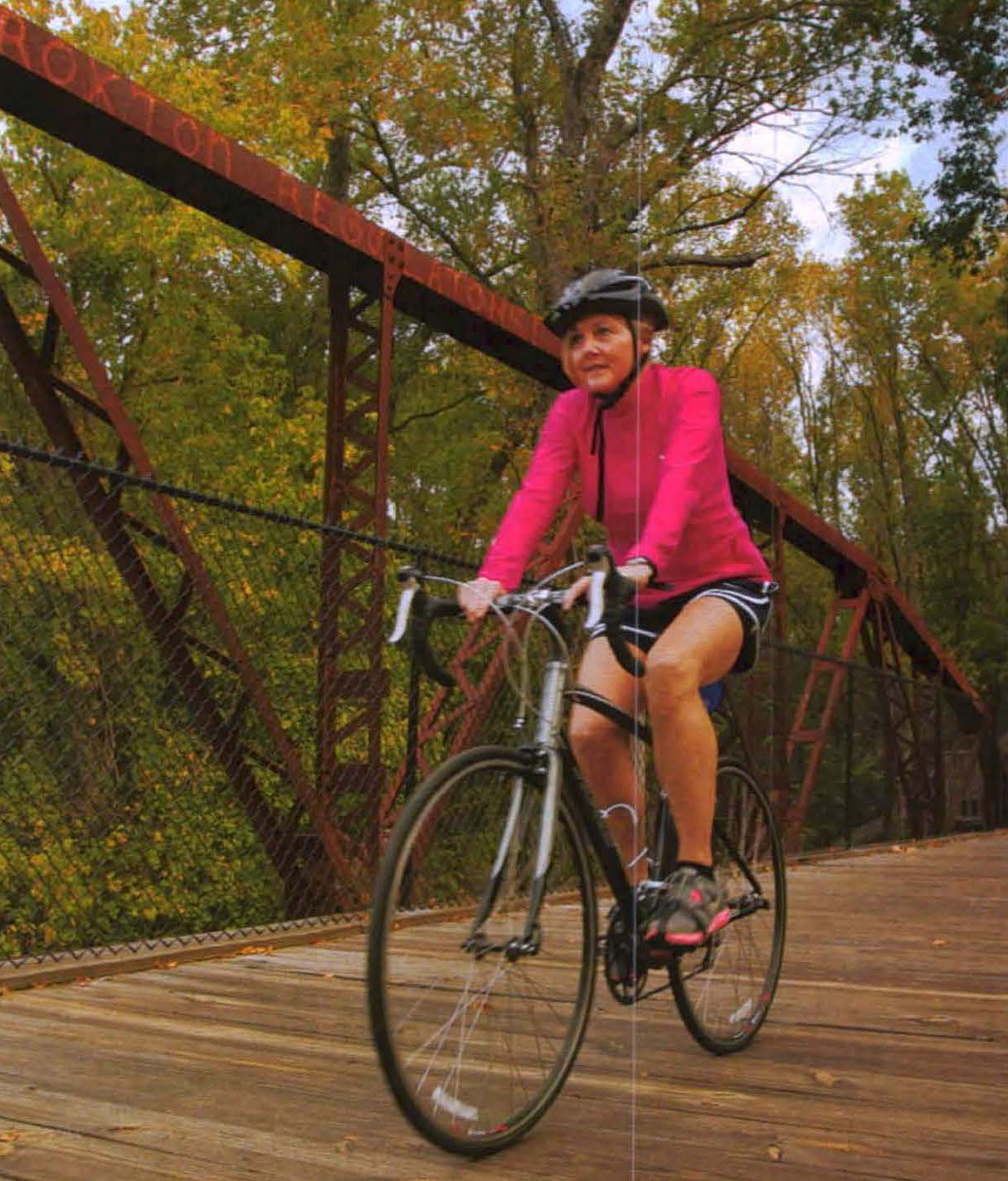 “Electronic counters placed on the six-mile paved section in Paris and Reno indicate an average of 360 users per day,” said Earl. “The Northeast Texas Trail is called the ‘Trail de Paris’ in Paris. We keep working to extend the trail outward from Paris, including paving the trail another 1.5 miles to the west and a 3.19-mile extension east from Reno to Blossom. When these sections are finished, we’ll have 11.5 continuous miles of surfaced trail in the Paris area.”

The sun was sinking toward the western horizon, sending shafts of golden light streaming down the east-west trail as we rode back to our cars at the trailhead. Earl has been so active in the trail’s creation that we stopped more than once along the way to talk to his friends and acquaintances. 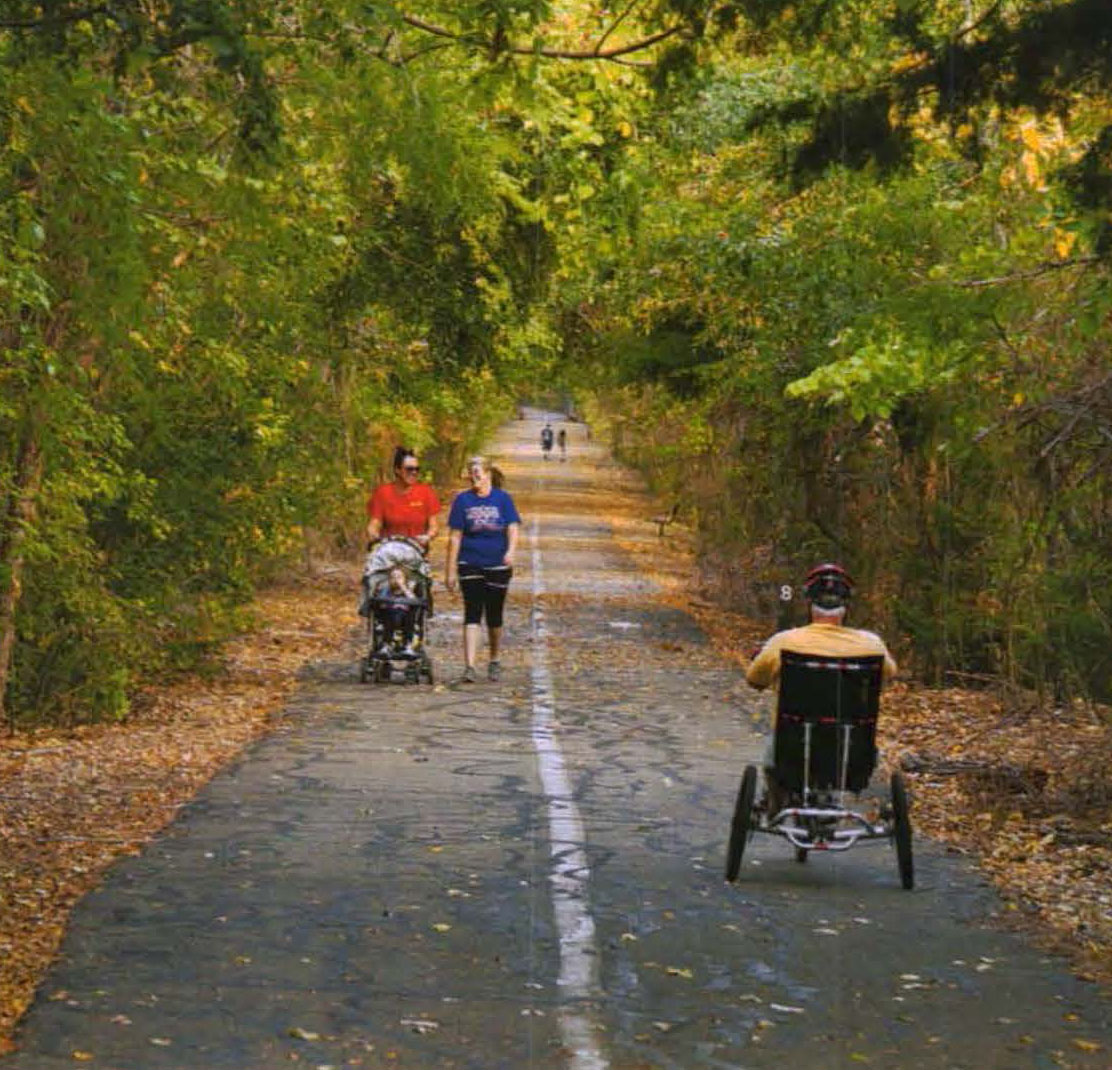 Every day, hundreds of walkers and cyclists enjoy this paved stretch of the Trail de Paris.

Early the next morning, I met Earl and some of those friends again at the same trailhead. We cycled briskly east along the trail, pausing occasionally for photos and enjoying the cool morning air. Afterward, we returned to the trailhead, traded out skinny-tire road bikes for fat-tire mountain bikes, and drove to a less developed section of trail in Roxton, a town about 15 miles southwest of Paris. The 56-mile section of the Northeast Texas Trail between Paris and Farmersville that includes Roxton is known as the Chaparral Rail Trail. In Roxton, led by Mayor James Cooper, we rode a short distance on a graded and cleared surface (excellent for mountain bikes) to one of two 1880s-era stone railroad bridges now part of the trail. The bridge crosses rocky Cane Creek, supported by three graceful stone arches.

After Roxton, I drove to the southwest end of the trail in Farmersville. The trail starts at the Audie Murphy Trailhead in a well-kept, shady park adjoining downtown with its quaint, brick-paved streets. Two historic wooden sheds once used by the Santa Fe Railroad for drying, sorting, and packing locally grown onions lie within the park.

Back on my bike, I headed out onto the trail with Farmersville Mayor Joe Helmberger to photograph local residents Mark Vincent, Ken Whited, and Emily Dillard and her young son Carson on a late-afternoon ride. “It’s nice to take my children to a safe environment with miles of trail where they can ride their bikes and explore,” said Emily as she pedaled along the trail with her son.

On the smooth concrete surface we quickly left Farmersville behind. We glimpsed green fields and grazing horses through gaps in the trees lining the trail We clattered over old wooden railroad bridges, reaching the end of the paved section in about 2.5 miles. Another mile of newly installed and compacted decomposed granite led to a tunnel of green trees in a bottomland section. After the granite surface ended, we followed a two-mile, cleared and graded (but rougher) section, to the Hunt/Collin County line at FM 2194 just short of the town of Merit.

As in the Paris area, trail improvements here are in full swing. In addition to adding a smooth surface to the Farmersville section of the trail, the city is building picnic and camping areas along its 5.2 miles of the trail and is constructing parking and a restroom at FM 2194. ”I have no doubt that someday the Northeast Texas Trail will be paved its entire length with concrete, asphalt, or decomposed granite;’ Helmberger said.

The next eight miles to Celeste have been cleared and graded, but like the last two miles before Merit, it’s best explored by foot or mountain bike. The sun was setting in the west, so we turned around at FM 2194 and cycled briskly back to Farmersville as the clouds above turned yellow and scarlet.

The next morning, I drove from Farmersville to New Boston on the far east end of the rail-trail. City councilman and local businessman David Turner took me out along the east end of the path. He showed me the carefully tended park the city has built at the terminus in the middle of the small downtown. From there, we took the trail into lush woodland. On my trip, I had followed the trail from the Blackland Prairie of Farmersville deep into the Piney Woods of East Texas. 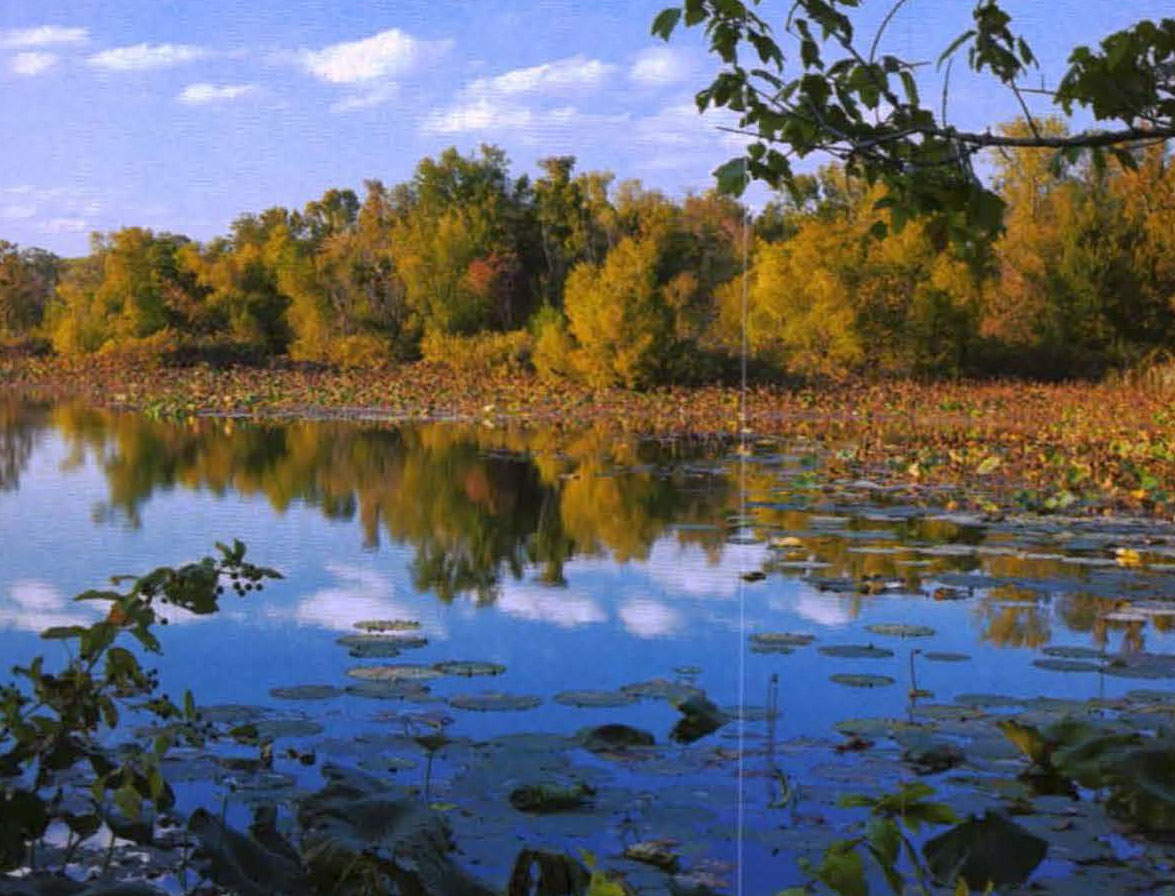 David showed me Scout Lake, a small, pretty reservoir dotted with lily pads that is tucked into the pines, sweet gums, and oaks of the thick East Texas forest. It and an adjoining smaller pond were built by the railroad to create a reliable water source to supply its steam engines.

“We’d like to build a city park at Scout Lake with equestrian facilities, parking, bathrooms, and a picnic area,” said David. “Eventually I’d like to see a trail where you could ride all the way to Farmersville on a road bike!”

Mayor Helmberger of Farmersville doesn’t have any trouble seeing it happening. “We’re on the edge of the Dallas-Fort Worth Metro area with its six million people. We’re the gateway to the trail.” Joseph Pitchford of Dallas may have been one of the first to ride the entire trail in one pass in October 2012. He and a friend took three days, spending the night in Roxton and Clarksville along the way. Some of the route was rough and overgrown, but they made it through. “We did the trip with just a credit card,” said Joseph. “We found all the amenities we needed along the way. We loved seeing small-town Texas, meeting people, and eating in cafes near the trail!”

On my last morning on the trail, I got up before sunrise in New Boston and started pedaling down the gravel path. Golden rays streamed through gaps in the tall pines and deciduous trees lining the route, creating spots of shimmering light on the path as the sun peeked over the horizon. Patches of wispy morning mist formed and dissipated in the crisp morning air. Birds twittered in the forest and crows cawed as they flew overhead. I breathed deeply, inhaling the woodland scents as I picked up my pace. I didn’t have any trouble believing that the dreams of Joe Helmberger, David Turner, Earl Erickson, and many others would come true.

The entire 130 miles of the Northeast Texas Trail are open for use, but have greatly varying levels of development. Go to traildeparis.org for information and maps.