Plan a Weekend in Carthage With Country Music, Boudin, and Kayaking 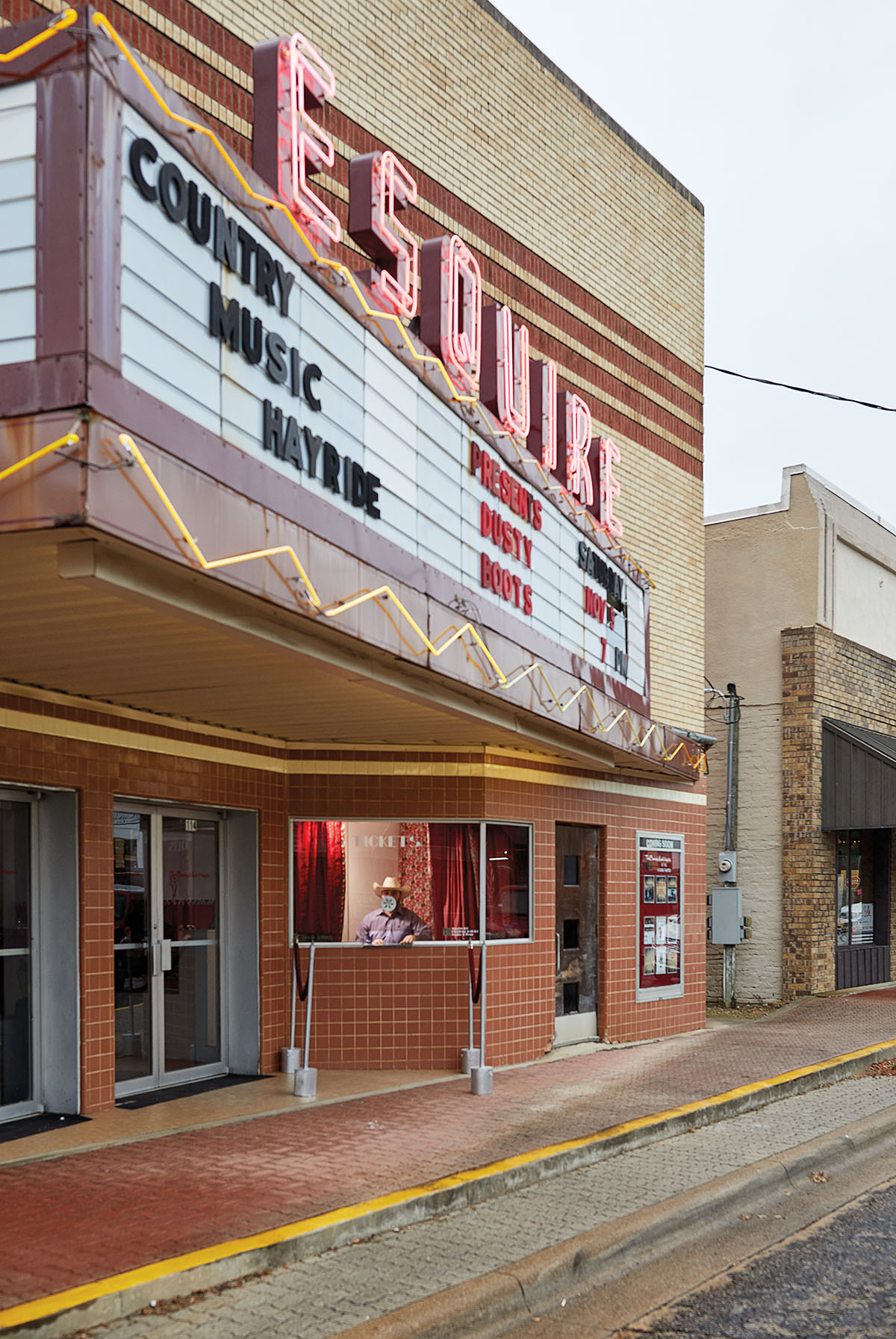 Approaching the East Texas hamlet of Carthage, I tune the car radio to KGAS-FM, which broadcasts country music, farm shows, and local news. It sets the mood for a spring weekend in the Piney Woods.

“People ask, ‘Is this more of the West than the South, or the other way around?” says Tommie Ritter Smith, president and CEO of Carthage’s Texas Country Music Hall of Fame and the Tex Ritter Museum. “The answer to both is yes.”

That’s not surprising. Carthage is the seat of Panola County, which borders Louisiana. And cotton—the historic crop of the old South —dominated the economy before natural gas displaced it.

Here you’ll find Panola College’s rodeo team training under the pines, and menus offering boudin and brisket side by side.

During my weekend of exploring Carthage, this Piney Woods town revealed itself to be a place where two cultures—Southern and Western—intertwine. 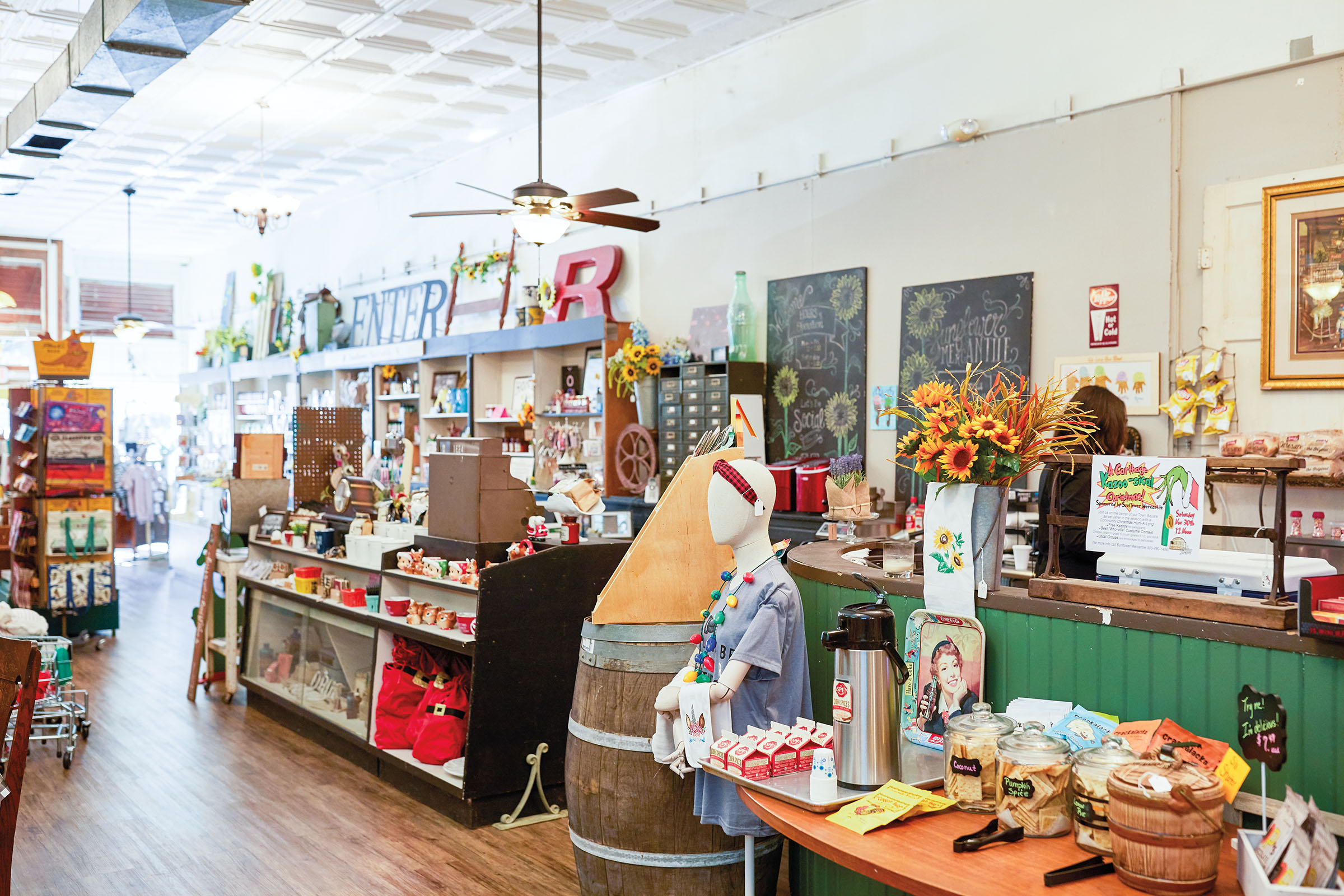 Scott Reeves, owner of Sunflower Mercantile & Soda Shop, is an example of how Carthage’s historic town square has come full circle. Reeves’ great-great-great-grandfather, pioneer Jonathan Anderson, donated the land where the square sits so Carthage could become the Panola County seat in 1848.

It was natural for Reeves, a distant cousin of country singer Jim Reeves, to return to Carthage after a career in religious music and make a home with his wife, Kelly Reeves. They renovated a pharmacy and opened Sunflower, a starting point for an afternoon of shopping. “It’s where people can go and just enjoy talking to one another,” he says.

Sunflower’s grilled cheese sandwiches and iced tea make ideal fare for a picnic on the square. The sundaes, which are prepared at an old-fashioned soda fountain; and the malts—poured from a 1930s milkshake machine—are reminders of the former pharmacy’s features. After browsing Sunflower’s collectibles, customers often continue on to nearby boutiques like Hobby Horse, The Fudge and More Store, and Chicken Row Market. 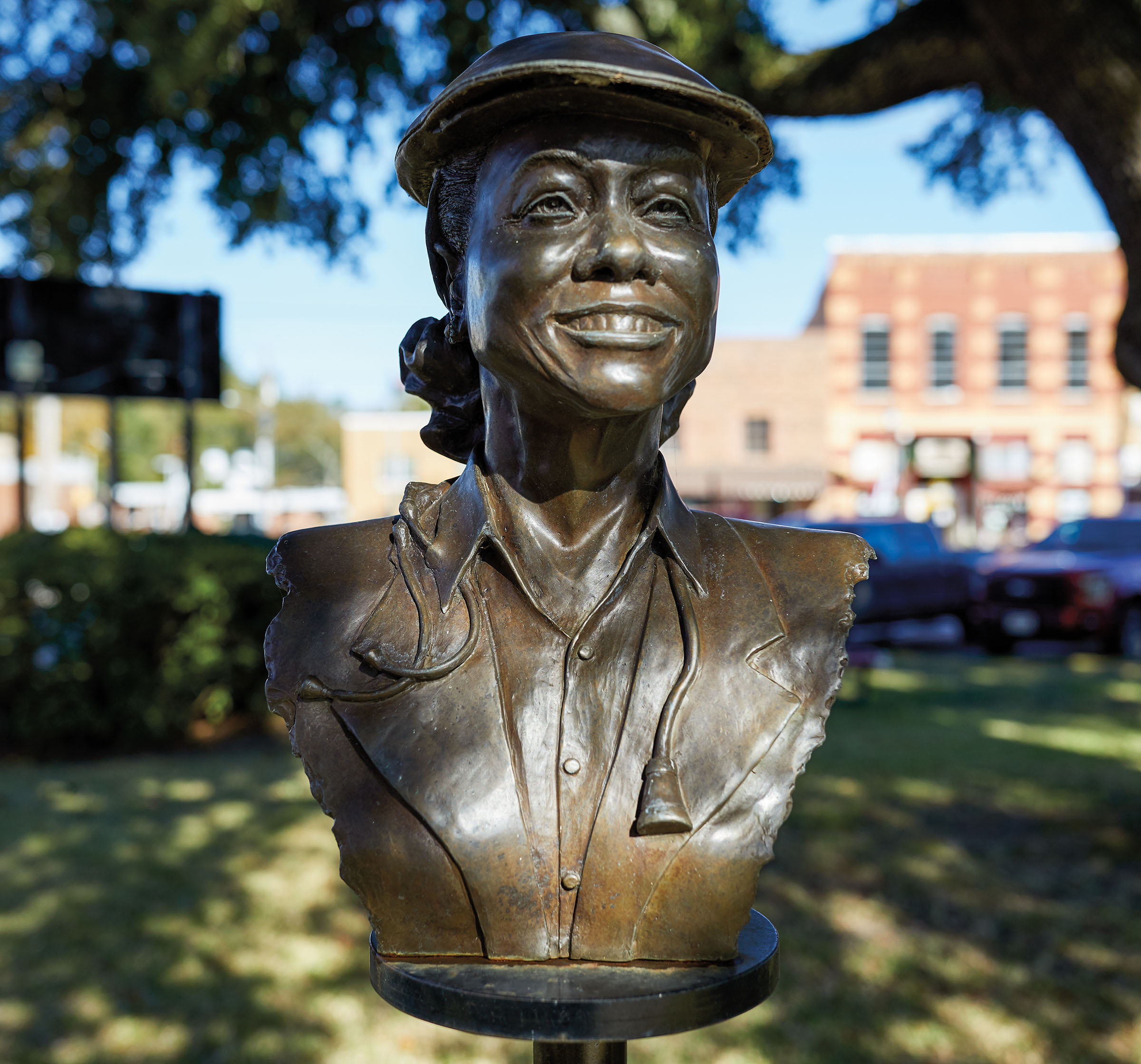 A bust of Dr. Mildred Faye Jefferson found in the main square 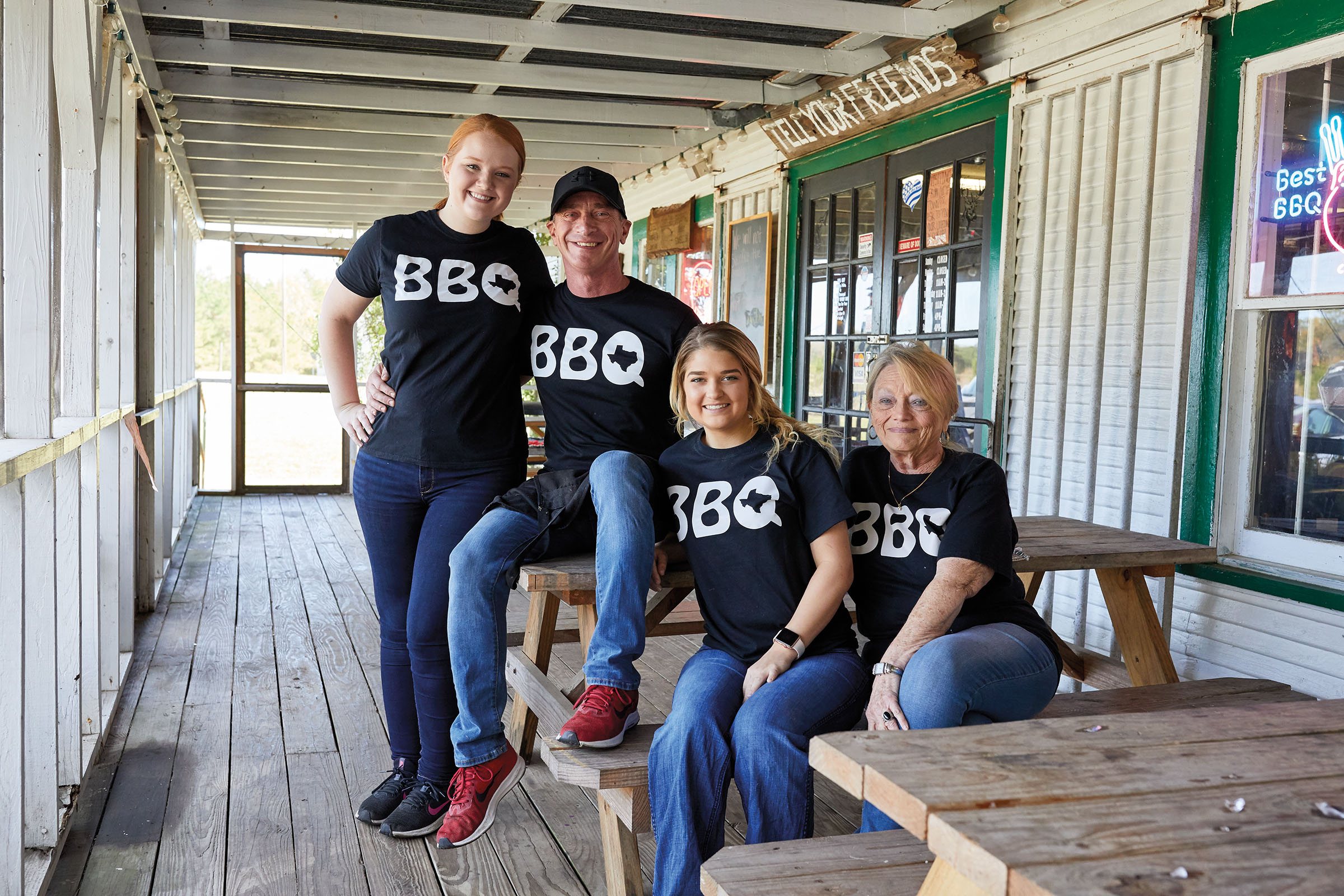 Tree-lined Lake Murvaul is worth the 25-minute drive from town. Its marina has boat ramps, campgrounds, cabins, and an RV park, along with a warm-weather swimming hole. Whether overnighting at the marina’s rustic accommodations or express hotels in town, visitors can enjoy a tranquil afternoon peering across calm waters from shoreline benches.

Not far away on Farm-to-Market Road 1970, the bucolic barbecue haven of Chuck’s Country Smoke House awaits. Pitmaster Chuck Terrell left his Dallas sales job and renovated a rundown shed on family property. The brisket at Chuck’s is smoked over red or post oak embers for 17 to 18 hours and spends the last three hours or so wrapped tightly in butcher paper to retain its juices. Boudin links are sold separately or chopped up with brisket and traditional sausage for Chuck’s most popular sandwich, the Susie Q, served on jalapeño-cheese sourdough and named for a customer who insisted on such a mixture. Chuck’s doesn’t sell alcohol, but it’s OK to sip what you bring in a cup. 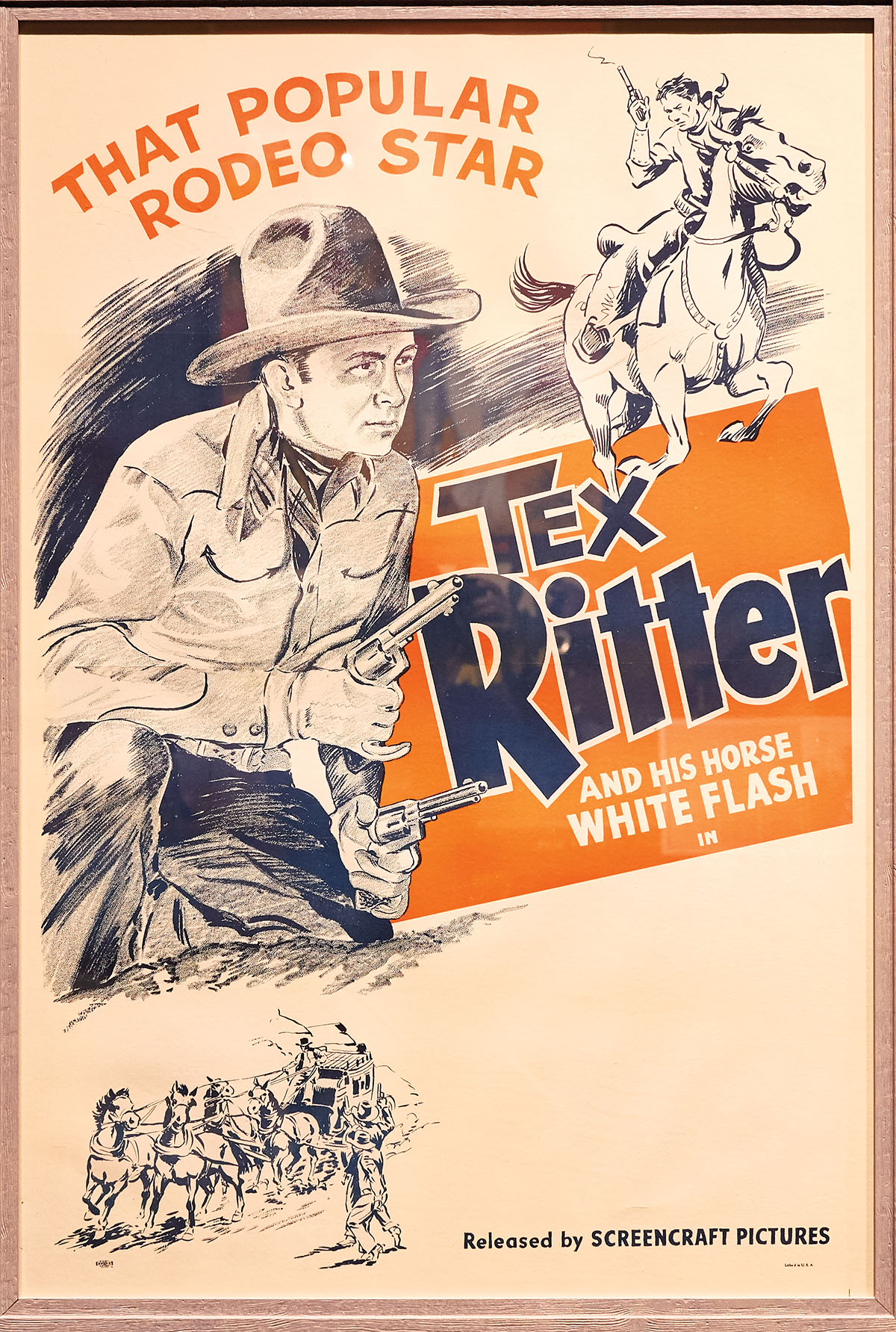 A Tex Ritter movie poster hangs in the Texas Country Music Hall of Fame in Carthage.

Head northeast on US 79 to find the statue of Panola County native Jim Reeves, his gravesite, and that of his beloved dog, Cheyenne. A quiet viewing of the statue begins a day dedicated to Carthage’s country music heritage. Reeves first tried minor league baseball, but injuries led him to a job in broadcasting and a stand-in performance on the legendary radio show Louisiana Hayride. His soft baritone rendition of “He’ll Have to Go” in 1959 hit No. 1 on country charts before his untimely death in a plane crash in 1964.

Reeves, the late Tex Ritter, and Willie Nelson were in Texas Country Music Hall of Fame’s 1998 inaugural class. By 2002, Smith, the Hall of Fame CEO whose father was Tex Ritter’s cousin, helped open the current museum in downtown Carthage. Tex Ritter’s son John, the late star of TV’s Three’s Company, and other family members donated their vast collection of Tex Ritter’s artifacts as a start.

Cases of memorabilia line the museum’s pathways, from Nelson’s bandana and Waylon Jennings’ black hat, to the guitar of Anson’s Jeannie C. Riley, whose “Harper Valley PTA” ascended to the top of the charts in 1967. Other honorees include Mac Davis, who sang “Texas in My Rearview Mirror;” and Ernest Tubb, the “Texas Troubadour” whose career took off in the 1940s. Visitors can also listen to scores of country hits on the museum’s jukebox.

Live From The Esquire

Dine at the Texas Tea Room, a restaurant located in an old bank building on the town square, where you can order grilled creole salmon or black pepper whiskey beef medallions with smashed potatoes.

Afterward, the nearby Esquire Theater hosts the Country Music Hayride, which features local musicians and guests jamming on the second and fourth Saturdays of each month for $8 admission. Up to a dozen artists perform, from up-and-comers to longtime professionals. Guitars outnumber fiddles, and there may be as many ball caps on stage as cowboy hats. Standards like “Faded Love” and “Honky Tonk Angel,” crossovers like “Blue Bayou,” and less familiar tunes like “Keep Drinking Until I Get Better Looking” fill out the playlists.

Country Roads or a River

During the spring, the Panola County backroads navigate forests blooming with native wildflowers and dogwoods, redbuds, and Carolina jessamine.

Just before FM 31 becomes Louisiana Highway 765, a left turn into a gravel-strewn clearing reveals a Texas Historical Commission plaque, which explains the significance of a weathered granite shaft nearby. Placed in the wilderness by surveyors in 1841 to mark the border of the Republic of Texas and the United States, it is the only known “international” marker now wholly inside the U.S.
A more ambitious day begins at the public boat ramp where FM 2517 crosses the Sabine River, the put-in for one of Texas Parks & Wildlife’s newest paddling trails, the 15-mile Sabine Sandbar Trail. “The river has beautiful sandbars for rest or camping without running into issues with landowners,” says Dr. Michael D. Banks, a retired dentist and conservation advocate from Jacksonville. 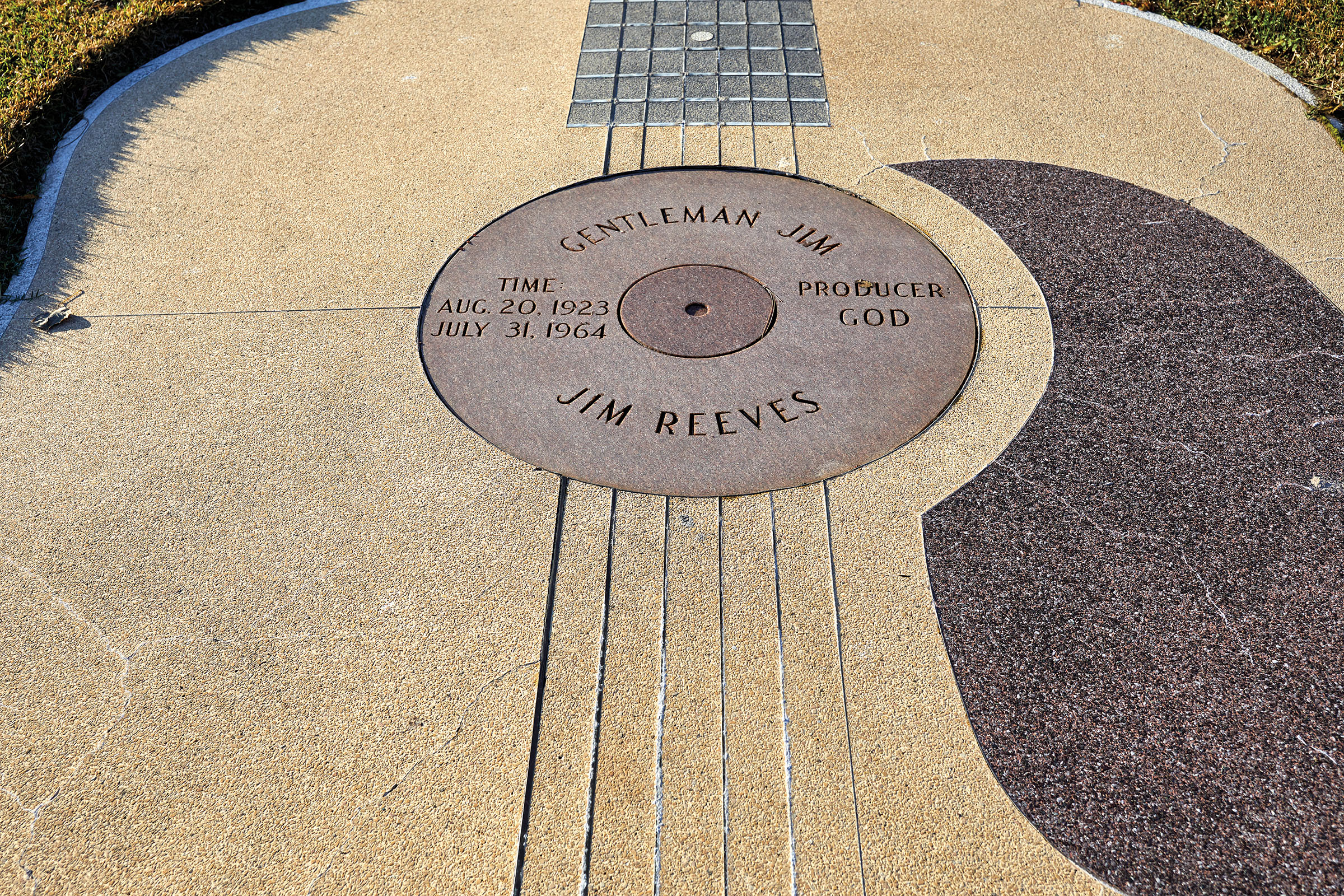 The Jim Reeves Memorial in Carthage