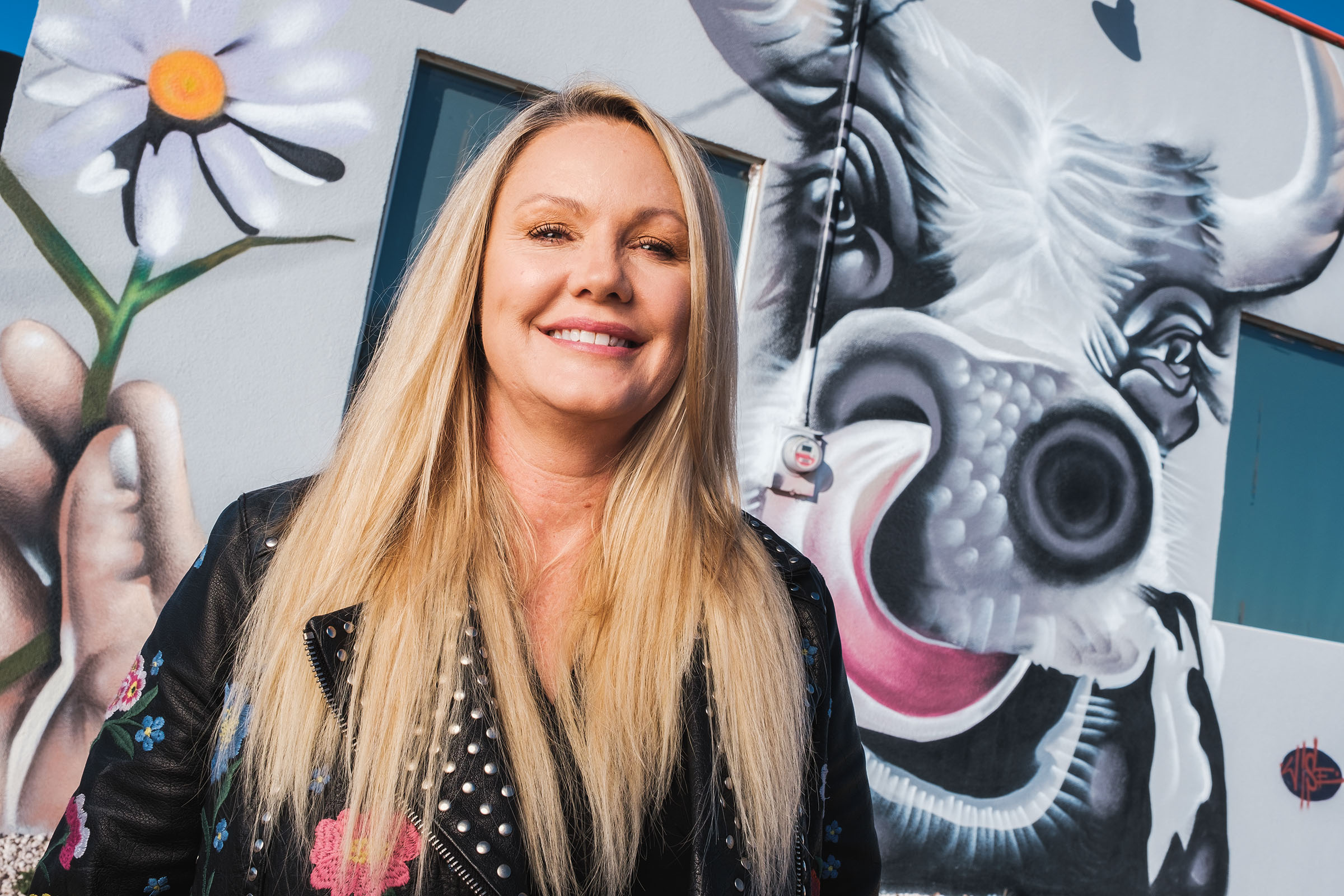 Murals like those decorating Jenny Morgan’s record shop are a hit with Route 66 tourists.

Jenny Morgan has lived all over Texas, from her college days at Angelo State University in San Angelo to stints in Austin, DFW, and Amarillo. In 2007, a desire to raise her family in a small town brought Morgan back to Shamrock, the town of her birth. Along Interstate 40, just 15 miles west of Oklahoma, Shamrock is known for its Route 66 heritage, the annual St. Patrick’s Day celebration, and—increasingly—for Morgan’s record store. In 2017, she opened Spinning Jenny’s House of Music, refurbishing a midcentury service station that had stood vacant for at least 20 years. The vinyl shop is just a block away from the U-Drop Inn, an art deco Route 66 landmark that now houses the town’s visitor center. Morgan says tourists come through her shop every day. “I never knew how much this road is traveled,” she says. “It’s insane.”

“They say every failed musician ends up opening a record store. When I was younger, I played the piano. I would play for hours. I was really into rock. I was big into Michael Jackson and Prince. I hate to admit this, living in Texas, but I was such a rebel here: Everyone liked country, but I just refused to listen to it. I like pretty much every genre now.”

You Can Go Home

“People say there’s always so much more that the big cities offer. I understand that, as far as entertainment and opportunities for kids. But I really like the fact that everyone here knows each other. They care for each other and watch out for each other’s kids. If someone suffers an illness or a loss, the whole town comes together.”

“I’ve worked retail all my life and have always been involved in music and booking bands. All but one of my kids had graduated or were about to graduate, and I was wanting to do something. I had been following the vinyl resurgence, and one day I was doing laundry and thought: ‘Oh my gosh, a record store.’ My stomach just dropped because I knew that’s what I had to do.”

“We’re located just east of the U-Drop, Shamrock’s crown jewel. That’s what the tourists are here for. A lot of them come into Spinning Jenny’s and ask, ‘What is this doing here?’ Well, it’s because I live here. The coolest thing is that everybody who comes in is always in such a great mood. They usually have a story about where they first listened to a record. Everyone remembers the first vinyl they got. Nobody remembers their first MP3.”

“We’ve got a pin map so our visitors can pin where they came from. We’ve had people from Russia, China, Australia, off the coast of Africa. Route 66 is a big travel destination for Europeans. What I hear back from them is how nice the people here are. And they love the art around town. We’ve got lots of murals.”

“We need to be thankful that our founding townspeople thought to do something like this. It’s such a great tradition. It brings in thousands of people. We always like to have a show at Spinning Jenny’s on the Saturday of St. Patrick’s weekend. We call it The Big Dance Warm-Up Party, with a rib cookoff, live music, and an open bar before The Big Dance at the Shamrock Community Center.”

“It’s definitely a slower pace than the big city. We have time for each other. When I lived in a big city, I didn’t feel the sense of community that I do here. You didn’t see people you know very often because everyone’s so busy, or there’s always a commute. I live out in the country, south of town. I live 9 miles away, but my commute is 12 minutes. People in a big city don’t know what they’re missing.”