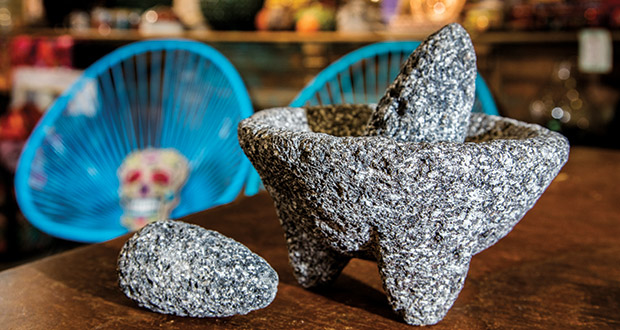 Stepping into the brightly colored display area of the Melissa Guerra Latin Kitchen Market in San Antonio was like entering into the kitchen of a good friend, albeit one whose culinary expertise far exceeded that of my wife Laura and me.

The giant tamale steamer pots and the hand-painted Talavera ceramic ware made us long to host our own colorful dinner party back home in McAllen, which was precisely why we’d planned this trip. We were hoping to learn to cook like Melissa Guerra, the store’s namesake and owner, who is also the author of our family’s all-time favorite cookbook, Dishes from the Wild Horse Desert.

Our journey had really begun several months earlier, when we discovered Guerra’s book in the cooking section of our local library. Laura and I both hail from the Midwest, but we’ve lived in McAllen for more than a decade and have long aspired to replicate some of the South Texas favorites we’ve enjoyed in the homes of our Valley friends. Most of our early efforts, though, had ended in failure, like the time we didn’t believe how much lard we were supposed to use when making tamales, and we ended up with a thousand corn-husk-wrapped rocks that languished for months in our freezer before mercifully disappearing into the trash.

Flipping through the first few pages of Guerra’s book, we knew we’d finally found what we needed: familiar dishes and ingredients, easy-to-follow instructions, and a welcome dash of the history of our adopted home. We learned, for example, that the Rio Grande Valley is nicknamed “Wild Horse Desert” because Mexican landowners fleeing their homeland after the U.S.-Mexican War left behind herds of donkeys, cattle, and horses, which roamed the vast open South Texas plains for generations. Once an internet search introduced us to Guerra’s shop in San Antonio’s lively Pearl Brewery development, we planned a road trip.

But we hadn’t just come to window shop. We were cooks on a mission. After trying many of the recipes in Guerra’s book, ranging from the enchiladas and flautas to cactus cornbread baked with nopales growing in our own yard, Laura and I had gained confidence when it came to the cuisine of our adopted home. But there was still one big problem—the salsas, which always seem to come out from our blender too watery, too frothy, and not complex enough to capture the true flavor of the Wild Horse Desert.

According to Guerra, what we needed was a molcajete—a three-legged mortar and pestle, carved from a single piece of volcanic rock, which salsa-makers have relied upon since pre-Columbian times. “The flavor of freshly stone-ground garlic and peppercorns, paired with the uneven chunky texture of stone-ground tomatoes and zesty chiles,” she writes, “beats all of the machine-processed salsas by miles.” What better place to find an authentic molcajete, we thought, than here?

Inside the shop, Laura and I browsed through an array of products we hadn’t even known existed—an avocado slicer and a chile seeder were two of my favorites—until we found the molcajetes occupying an entire bottom shelf. Laura picked up one of the largest ones and nearly toppled forward on account of its weight. “A molcajete is a commitment,” she said, holding the mortar securely with both hands.

One thing was still missing, though: the pestle. At the register, the clerk smiled when we inquired about the absent piece. What we needed, she explained, was called the tejolote; the molcajete was actually only the mortar part of the equation. From beneath the counter, she wrestled out a cardboard box containing dozens of hand-held grinders in different sizes, since the tejolote is meant to fit the size of the cook’s hand. Once we’d finally found the perfect tejolote (receiving a valuable lesson in mashing technique in the process), we left the store with a shopping bag that could have held a bowling ball and the confidence that our perfect salsa was as good as ground.

Back at home, though, reality set in: Making salsa the pre-Columbian way is hard work. To start with, we had to “season” the molcajete. Guerra described two methods, and it seemed only right to go with the more traditional one, which involved repeatedly grinding white rice until it no longer turned gray with specks of rock. After two wrist-aching rice sessions brought us no closer to this goal, however, we opted for the modern update, which required only a vigorous 20-minute polish with a wire brush.

At last we were ready, and we were not disappointed. For all the work it required, Melissa Guerra was definitely right. The salsa was different, not only pleasingly chunky but also more subtle in its flavor; ironically, all that pounding and mashing seemed to keep each flavor slightly separate, like a tangy layer cake of tomatoes, chiles, garlic, and peppercorns. Biting into crunchy tostadas slathered generously with our creation, we beamed with pride at having made one of our favorite comfort foods at home.

“I believe,” Laura said, preparing to take another bite, “our lives will never be the same.”