A flag and a festival herald a historic battle 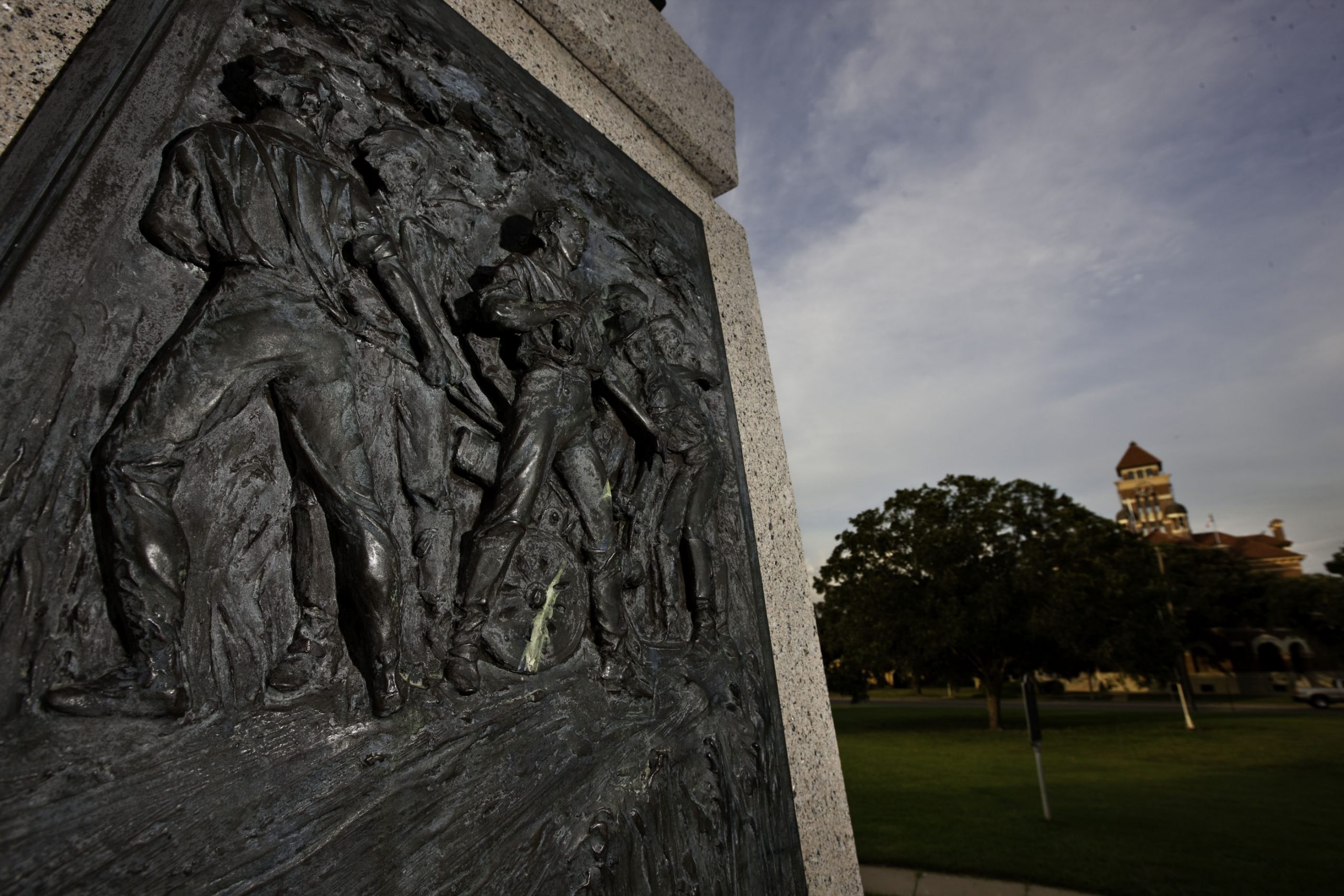 The Texas Heroes Monument in Gonzales, created by sculptor Pompeo Coppini, pays tribute to those who fought for Texas’ independence. Photo by J. Griffis Smith.

When empresario Green DeWitt was given approval from the Mexican government in 1825 to establish a 400-family colony in south Texas, there was no evidence to suggest that these new residents would become revolutionaries as well as pioneers. But it’s safe to say that the Mexicans would go on to regret their support of this expansionism.

From Mexican President Santa Anna’s perspective, the homesteaders of DeWitt’s community near the junction of the Guadalupe and San Marcos rivers were a bunch of ingrates. At the personal request of DeWitt, he had loaned them a six-pounder bronze cannon for self-defense in 1831. When he wanted it back in 1835, as tensions between the settlers and Santa Anna’s government escalated, the fledgling Texans responded with the kind of in-your-face bravado that would come to define the upcoming war for independence and, really, the Lone Star State’s attitude from then on.

“Come and take it,” DeWitt’s crew challenged the Mexicans. They tried, and the rest is Texas history.

One hundred eighty years after it was the site of the first shot of the Texas Revolution, the town of Gonzales (population 7,400 or so) still fiercely clings to that identity. It is certainly what drives the majority of the town’s tourist trade, which reaches its zenith with the annual Come & Take It Celebration in early October. This year’s festival takes place October 2-4, and will include live music, a battle reenactment, carnival rides, food cook-offs, a road race, and hundreds of Texas flags and battle flags emblazoned with that famous rallying cry lining the streets and decorating vendors’ wares.

Still, even though Come & Take It weekend is the lynchpin of the town’s visitor outreach, Gonzales doesn’t exactly close up shop the rest of the year. It doesn’t need to.

It’s an unusual town, starting with its layout. Designed according to Mexican colonial tradition, it features seven separate plazas for public use, laid out in a cross pattern and surrounded by 42 uniform blocks. The plazas—Market, Texas Hero, Central, Confederate, Church, Military, and Cemetery—stretch along St. Louis and St. Joseph streets and are named for their original purpose or what they evolved to commemorate.

Gonzales is history-buff heaven and interesting enough to spark a passion for Texana in folks with only a mild beginning interest. Everywhere you turn, there are museums, including the Pioneer Village & Living History Center, the County Jail Museum, Texas Pioneer’s Museum, and the Gonzales Memorial Museum. The latter is home to the cannon that may be the one that started this whole thing. In person, it’s a diminutive object for something so steeped in significance.

Leon Netardus jokes that he is a newcomer to Gonzales, having moved here from Victoria in 1942. Now 86, he is a walking encyclopedia of town lore and historic details and loquaciously shares his knowledge with visitors as one of two volunteer tour guides for the Chamber of Commerce. He will tell you that the first battle flag in Texas was supposedly made from DeWitt’s daughter’s wedding dress, and about how once when the pipes froze in the jail, its three prisoners were sent home for the weekend and reported back on Monday, as instructed.

Leon says that Gonzales County is one of Texas’ biggest cattle producers. He’ll tell you about how the sprawling oak tree just east of town known as the Sam Houston Oak sheltered Houston’s soldiers one dismal night in 1836, and that 41 of the 200 or so men who died at the Alamo were area residents who answered William B. Travis’ call for help. Many of their descendants still live here.

He also knows all about the town’s 80 historic homes, built between 1845 and 1915. They are a source of pride for residents, who do their best to ensure that any refurbishments remain faithful to the structures’ original integrity, from exterior and interior paint colors down to each newel post and powder-room fixture. A handful of homes are selected each year for a guided tour held the first week of December; for the rest of the year, visitors are limited to appreciating the homes from the street—either with or without a guide’s jovial companionship.

As to why Gonzales has remained zealously committed to preservation, Leon says, “We just don’t throw things away down here.” That’s what makes the iconic “COME AND TAKE IT” flag the natural choice when it came time for me to select a souvenir from my visit. The 1835 original may have been made from DeWitt’s daughter’s wedding dress, but today’s incarnations come in cotton or synthetic material—less poignant, maybe, but far more durable. The best selection of merchandise bearing the famous slogan is at the Chamber of Commerce’s Visitor Center. Even if you don’t plan to purchase a flag, you’ll want to drop by the Chamber office. It’s housed within Gonzales’ 1887 jail-house, another of the town’s painstakingly restored historical sites.

In the main room of what was once the sheriff’s living quarters, visitors can browse a substantial cache of Gonzales guidebooks and “COME AND TAKE IT”-emblazoned magnets, beer cozies, bumper stickers, pens and pencils, and, of course, flags, ranging in size from two to five feet long. Regardless of size or composition, the flags are a great reminder to all of us who call ourselves Texans that our deep-seated state pride was hard-won by real people who knew that this was someplace very special. When you look at it that way, could there be anything more deserving of a place of honor than that?