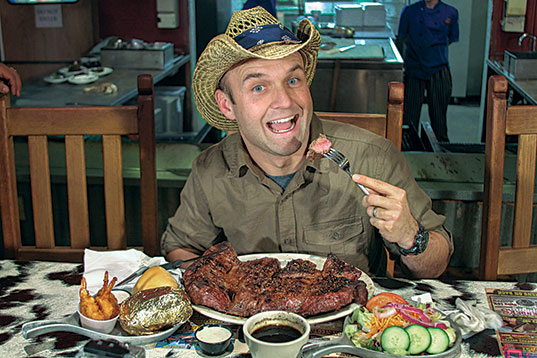 Some may only know Amarillo as a Panhandle cowboy town, and there’s certainly truth to that reputation. However, those who venture into the High Plains to visit Texas’ northernmost big city will find much more than boots and bulls.

9:00 a.m. I made it to “Amarillo by Morning” with breakfast on my mind. I headed to Youngblood’s Stockyards Café, which relocated away from Amarillo’s livestock auction but still serves up its classic cowboy breakfasts. I ordered a couple of fried eggs with a side of pork chops big enough to bust the belt off the hungriest of cowboys.

12:15 p.m.  I hopped in my car to check out the Hoof Prints of the American Quarter Horse public art project. Within a few minutes of driving around town, I spotted a dozen or so horse sculptures painted in motifs from the Texas flag to a psychedelic moonscape.

1:00 p.m. For more art, I drove west on Interstate 40 to the iconic Cadillac Ranch. The quirky attraction of 10 classic Cadillacs buried nose down in a field has drawn millions of viewers, many of whom have left their own artistic marks on this ever-changing canvas. Luckily I had brought my own spray paint and added to the public artscape. (Yes, it’s legal and encouraged.)

1:30 p.m. Inspired by the classic cars, I headed to the Route 66 Historic District, a strip of vintage buildings still possessing the spirit of America’s “Mother Road,” which ran through Amarillo on the way from Chicago to Los Angeles. While cross-country traffic is rare these days, this eclectic district was buzzing. I popped into Texas Ivy Antiques to peruse its random relics, then over to Wilson Electric Lamp Co., full of decades-old lighting fixtures. I polished off my stop at Cowboy Gelato, because even cowboys appreciate delicious Italian ice cream.

4:00 p.m. I drove to the Jack Sisemore Traveland RV Museum behind the same-named dealership. The renovated vehicles inside this free museum took me back to the era when Americans were first christening the interstate roadways. From the early box-shaped trailers of the 1930s to the shag-carpeted luxury liners of the 1970s, the vehicles made me eager to pack my bags and leave for an extended trip.

6:00 p.m. I had intentionally skipped lunch to prepare for dinner at the Big Texan Steak Ranch. This family-owned steakhouse made its name along Route 66 giving away “FREE” 72-ounce steaks. The only catch: For the steak to be free, you must eat it in one hour along with a baked potato, shrimp cocktail, salad, and buttered roll. Otherwise, you pay $72. Not one to back down from a challenge, I stepped up to the plate (literally). The timer started and I began to chew and swallow as fast as I could. The steak was quite tasty; the only problem was that there were four and a half pounds of it. Fifteen minutes in and it didn’t look like I had made a dent. Chew, swallow, repeat, chew, swallow, repeat. My jaw began to tire, and I hit the proverbial wall. The last 30 minutes consisted of me attempting to shovel meat into a stomach that could take no more. Time expired with a little less than half of the steak left. I failed, but in valiant fashion.

With a bull’s worth of beef in my belly, I decided to call it a night. I happily rolled back to my car and reveled in a day worthy of the great Texas Panhandle. So whether you follow my footsteps or forge your own path, I hope to see you on the road.