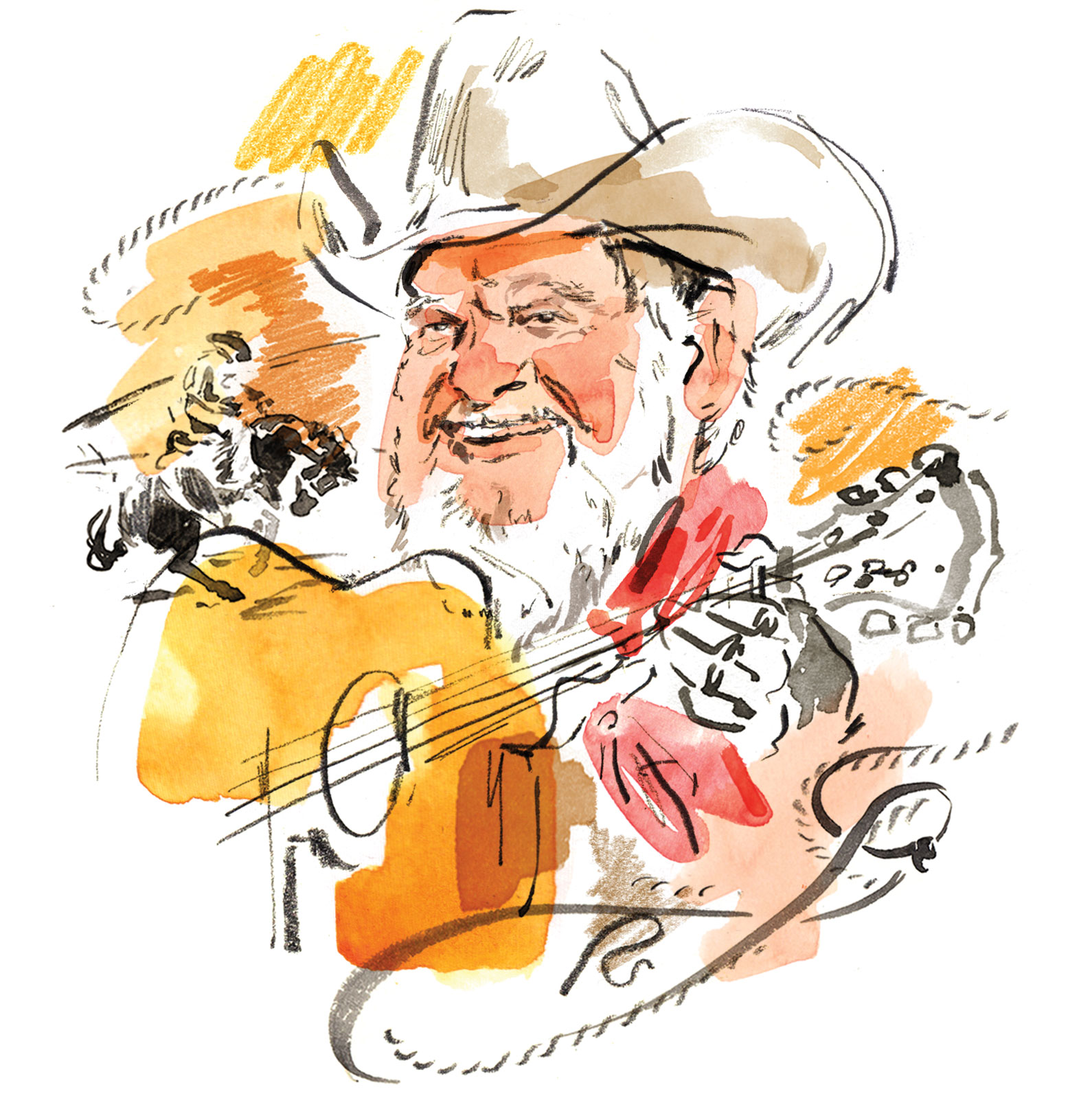 Driving the backroads northwest of Fort Worth, you’d never know that one of the luminaries of Texas country and western music lives just around the bend. Down a gravel road, a pickup marked with Red Steagall’s “RS” brand signals that Steagall is around today. Inside his office, framed records and photos signed by the likes of Ronald Reagan line the wall, hinting at Steagall’s influential career. The display saddles, miniature chuckwagon, and Western artworks reflect a fascination with ranching heritage that has made Steagall one of the nation’s preeminent cowboy poets.

Born in Montague County, Steagall grew up in the Panhandle town of Sanford. He studied animal science and agronomy in college, but it was music that took him to places like Hollywood and Nashville. For the past 42 years, Steagall’s ranch in Azle has been home base for a career that’s generated 25 albums, including the 1976 classic Lone Star Beer and Bob Wills Music. His resume also includes several books of cowboy poetry, movie and TV appearances, and in 1991, legislative designation as Texas’ “Official Cowboy Poet.”

“Texas is its own country, and the reason for that is we have so much pride in who we are and what we’ve accomplished.”

These days, the 80-year-old hosts a radio show and TV program chronicling the ranching way of life. When not traveling for work—177 days on the road in 2018—Steagall dedicates his time to causes like the West Texas Rehabilitation Center and the Red Steagall Cowboy Gathering and Western Swing Festival, held every October for 29 years at the Fort Worth Stockyards.

Q: You overcame polio as a 15-year-old. That’s hard to imagine.
A: It was pretty traumatic. I was on the football team, the Phillips Blackhawks, and I woke up the morning before the first game with a horrible temperature and excruciating pain in my head and my back. And then I spent two weeks in the hospital and two weeks in a rehab center. That was in September of ’54, and in January of ’55, the Salk vaccine was in full use. So I’m the last of the polio class, thank God.

Q: What were the impacts of the disease?
A: I lost the use of my upper left arm. So I have the use of my lower arm and my hand, but my fingers were just like little pieces of rope. I regained the strength in my fingers by playing a mandolin and a guitar. It took several weeks to concentrate on one finger at a time, getting enough strength to make a chord.

Q: Is that what led you into the music business?
A: That’s all I ever wanted to do really. After I got out of college, I got into agricultural chemistry and sales, and then I had some friends who were doing really well in Hollywood, and they invited me to come out. One afternoon, I came home and my roommate [Don Lanier] was fooling with his guitar, and he and I wrote a song called “Here We Go Again,” and we got Ray Charles to record it. That was in ’66, and by 1969, I had 60 of my songs recorded by other people, and I started recording myself. My first chart record was “Party Dolls and Wine,” which was released in December of 1968. It got into the Top 10, and that kicked my career off.

Q: You like to sing about rodeos. Did you ever participate in any?
A: When I was at school in West Texas [A&M, in Canyon] a group of my friends built a bucking barrel, a suspended barrel. And I learned to ride that thing, and they entered me in an intramural rodeo, and I won it, but I had to tie my left arm down to my chest so I wouldn’t slap the bull and get disqualified. For about three years I entered amateur rodeos in the Panhandle and eastern New Mexico—and then realized I could make a lot more money playing the dances.

Q: You’re credited with discovering Reba McEntire. How did that happen?
A: I saw her sing the national anthem at the National Finals Rodeo in Oklahoma City [in 1974], and I was really overwhelmed with her ability to control her voice, both from a tone standpoint and an emotional standpoint. I was living in Nashville at the time, and I needed a female singer to do two songs. So I invited Reba and her mother to come to Nashville, and we cut a demo on those two songs. We pitched that demo and finally got some interest from Mercury Records. And so we signed Reba to Mercury, and it just built from there.

Q: When did cowboy poetry become part of your career?
A: I like to say that 1985 was the year that sad songs and waltzes quit selling. What I was doing was no longer competitive in the radio world. That same year the first Cowboy Poetry Gathering was held in Elko, Nevada. I went out there and fell in love with the art form and realized that’s where my heart had been all of my life. So for five years I didn’t write one song. I wrote nothing but poetry, and as a result, I created a whole new market for what I do as far as performance goes.

Q: What are some of your favorite venues to play?
A: I really like to perform for people who understand what I’m talking about, and that is primarily at functions for people who are in the livestock industry—the American Quarter Horse Association, the Angus Association. I have performed at the Fort Worth Stock Show five times, and some of those years will always be the highlight of my career.

Q: Where do you like to take visitors in this area?
A: I have a lot of friends who are interested in history, and there are a lot of historical places like Isaac Parker’s cabin [at Fort Worth’s Log Cabin Village] and Greenwood Cemetery where Oliver Loving and Bose Ikard are buried in Weatherford. Everybody likes to go to Fort Worth, to Cowtown, which is changing, but they like to feel like they’re going back a hundred years.

Q: You travel a lot. What distinguishes Texas from the rest of the nation?
A: Texas is its own country. And the reason for that is we have so much pride in who we are and what we’ve accomplished, and we have a feeling of belonging. It doesn’t make any difference where I go in the world, if I wear a hat, they’ll say, “Hey, cowboy.” Texas is identified with the trail drives that went north to the railheads after the Civil War. And so the cattle business made the image of Texas, but it all started with those people who did not give in to tyranny and developed their own way of life on their own piece of ground.

Q: How do you explain the enduring appeal of cowboy poetry and Western heritage?
A: The cowboy way of life that I like to talk about extends from an agrarian society where we had to depend on our neighbors, not only for help but for survival. As we moved to the cities, we forgot some of that. We didn’t have to really depend on each other anymore. So life changed for all of America. But the thing that remained is a respect for yesteryear and the ability to look forward to tomorrow. So the traditions and values of an agrarian way of life make us a harmonious society, and that lifestyle is what America stands for—it’s honesty and integrity, loyalty, work ethic, dedication to family, conviction about their belief in God, and practicing common decency and respect for their fellow man every day.

Q: Which of your poems are you most proud of?
A: The main one is “The Fence that Me and Shorty Built.” That was about lessons I learned from my uncle on his farm in northwestern Iowa, when he indicated to me that I’m in charge of my destination, and if I don’t choose to be the right kind of person, then I wasn’t going to be happy because nobody’s gonna be happy with me.

The Red Steagall Cowboy Gathering and Western Swing Festival is Oct. 25-27 at the Fort Worth Stockyards. Catch Steagall weekly on Cowboy Corner, which airs on radio stations around the country and on SiriusXM; and on Red Steagall Is Somewhere West of Wall Street, which airs on RFD-TV and The Cowboy Channel. Steagall’s latest album, Hats Off to the Cowboy, is planned for release this October. redsteagall.com