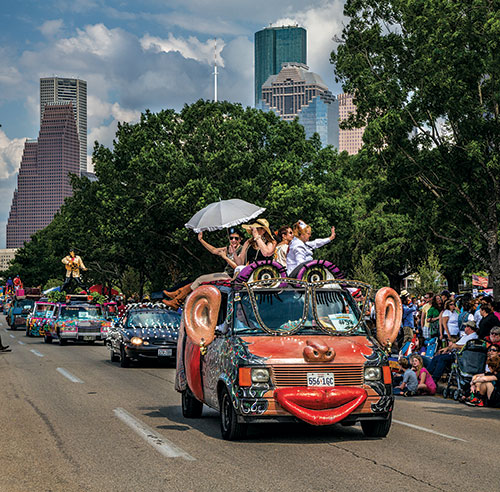 Houston folk artist Bonnie Blue created the “Women Rock Artcar” in 2002 and has since taken it on the road to 15 states.

On a sunny day last May, the bustle of traffic along Houston’s Allen Parkway momentarily slowed to a crawl comprised of fancifully decorated cars, costumed unicyclists, and lawn mower-driving artists.

The 27th Annual Houston Art Car Parade will take place on Saturday, May 10. The parade route runs along Allen Parkway from Waugh Dr. to Bagby St.

My kids and I joined the spectators who set up camp along the tree-lined banks of Buffalo Bayou—in the shadow of downtown’s skyscraper-filled horizon—to enjoy the spectacle that is the Houston Art Car Parade.

This event—now the world’s largest art car parade—began in 1988 with 40 entries and 2,000 spectactors as part of The Orange Show Center for Visionary Art’s mission to protect and proliferate Houston folk art. In addition to putting on the Art Car Parade, the organization manages the architectural maze called The Orange Show Monument and the beer can-clad home known as the Beer Can House.

Today’s parade boasts more than 250 entries from 23 states and two foreign countries, along with more than a quarter-million fans lining the parade route. Accepting “anything on wheels,” the parade includes a variety of outlandishly decorated or otherwise customized entries ranging from cars to rickshaws.

With live bands playing and crowds congregating, the parade route takes on a festival atmosphere hours before official start time. In fact, the Houston Art Car Parade has grown into the Houston Art Car Weekend—three days of revelry with pre-parade events like the Sneak Peek at Discovery Green and the Legendary Art Car Ball giving fans the chance to get up-close-and-personal with the art cars and artists. And then there’s the unsanctioned post-parade Illuminated Cruise, where participants crank up the pyrotechnics.

Many spectators come to the parade wielding folding chairs, collapsible canopies, and coolers, prepared to create their own oasis in the midst of downtown Houston. Those seeking a more luxurious viewing experience flock to the ticketed VIPit, where they watch the parade from shaded bleachers while enjoying nibbles and drinks from local restaurants.

Cheers erupt when the parade officially begins, Houston’s mayor leading the way in a red, white, and blue classic convertible. Hundreds of art cars and other wheeled contraptions follow behind, shimmering with broken-glass mosaics and impressing with larger-than-life sculptures of gnomes, dinosaurs, and fried chicken.

Whimsy abounds in forms such as a sock-monkey minivan, its brown paint flecked with white and a red smile plastered across its hood. A blue Volvo known as the “Sashimi Tabernacle Choir” rolls by; bedecked with 250 opera-singing fish, it features a motorized lobster conductor leading the aquatic orchestra. A crew of more than 30 volunteers worked for several months, using 300 pounds of batteries and five miles of wire, to construct this electronically advanced art car.

A gigantic replica of a VW Baja demands our attention; designed from a 1959 Walter Crash Truck, “Big Red” weighs in at 10,000 pounds and ranks as the world’s largest off-road beetle. In fact, this creation gives a nod to the art-car movement’s beginnings. While the movement has gained significant momentum in the past two decades, its roots go back to the decorated VWs of the 1960s and ’70s.

When we see Rebecca Bass and her Jefferson Davis High School students’ entry, “Earth Wind and Fire,” my daughter gasps, “Now this has been bedazzled!” Indeed, the shimmering vehicle boasts a spectacular scene of sculpted and mosaiced musicians, dancers, and instruments, with a golden-winged eagle presiding over all. The car’s title plays out through a fog machine, trickling fountain, and propane torch (though pyrotechnics aren’t allowed during the official parade).

Bass—who has participated in the parade with her art students for 23 years—purchases a car each year and then spends three-and-a-half months guiding her students in its transformation. After the parade, she gives the cars to museums all over the world.

Though her cars have claimed numerous first-place prizes in the parade, Bass counts the impact on students’ lives as her favorite part of the Art Car experience. “The kids gain a sense of community and learn how to work through problems,” she says. “And when a reporter from France puts a mic in their mouths during the parade, they feel different and wonderful and special. They feel like they are somebody for a short while.”

I’m glad that so many somebodies pool their artistry to create this quirky parade. And who knows, I might just glam up a car and join them one day.