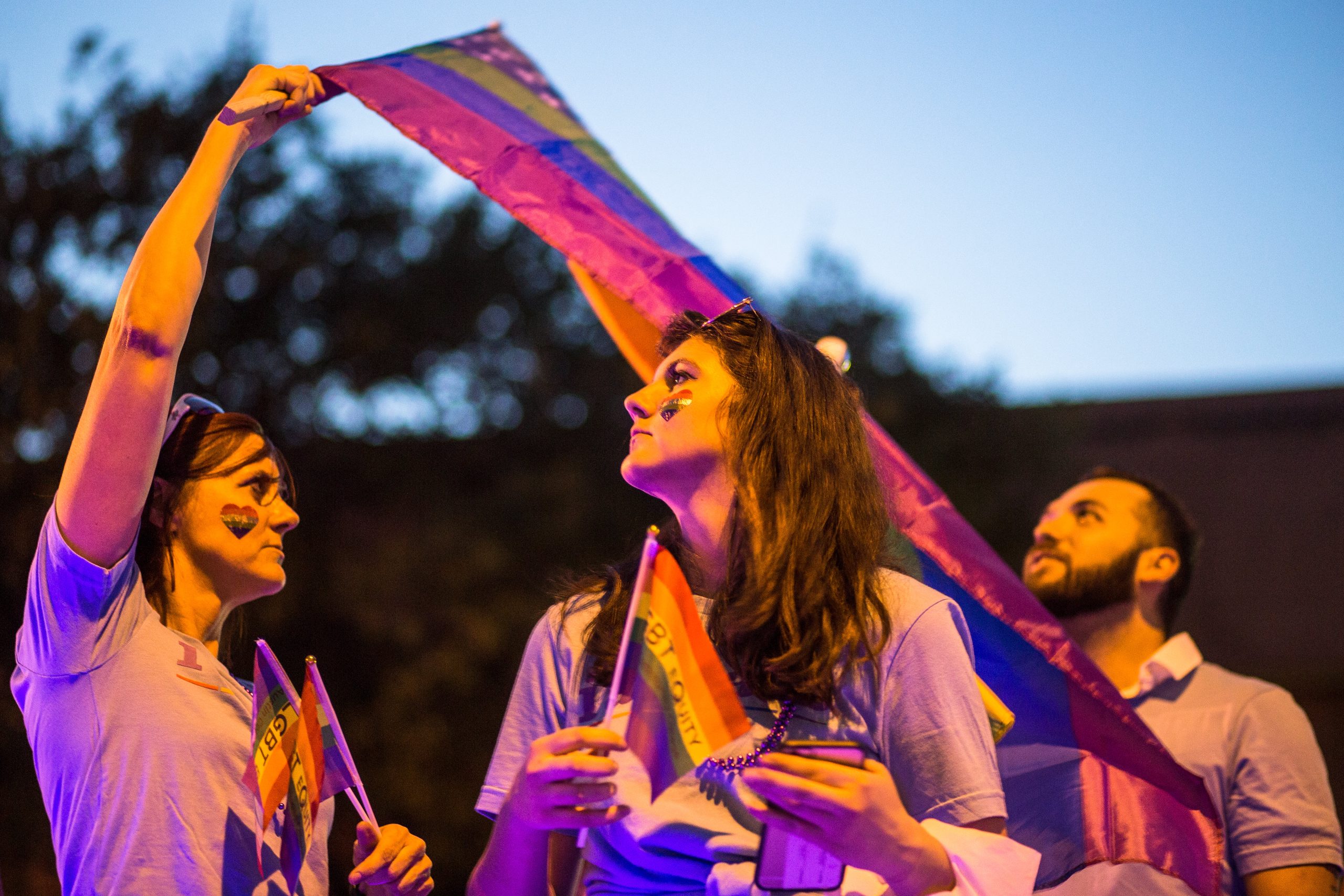 Coming out of two long years of canceled events and public gatherings due to the pandemic, people all around Texas are getting back on the party saddle. And in June, that means one thing: pride celebrations.

It’s not just the big cities like Austin and Houston that are celebrating this year. Smaller cities and towns across the state are jumping on the rainbow bandwagon and hosting pride parades of their own. Many towns are throwing pride celebrations for the first time, like Round Rock’s inaugural parade earlier this June. These festivities bring together community members of all kinds—LGBTQ people and allies alike—blending local customs with the greater queer culture.

With a large number of students in their backyard, citizens of Bryan are accustomed to a bit of disruption. Texas A&M has a well-established queer community, and with a student body as big as theirs, it’s easy for their activism to spill into the town. “In a positive way,” says Abigail Noel, a spokesperson for Destination Bryan, the town’s official tourist information center. For this year’s pride celebrations, local organizations and A&M students partnered with Bryan locals to put on fun events all month long.

On June 18, KinderHill Brew Lab downtown is hosting its second Savage Pride Party since opening a little over a year ago. There will be a drag show to raise donations for The Trevor Project, a nonprofit organization focused on suicide prevention among young queer people. And if one show isn’t enough, then head down the street to Halo; the local LGBTQ bar hosts drag shows every Friday and Saturday night, and is known for its high energy dance music.

But Bryan Pride isn’t just about the parties—it’s about community, too. Every first Friday of the month, Bryan has a small block party-like celebration that the whole city is invited to. For pride month, they incorporated queer organizations and held June’s first Friday it at the local Pride Community Center. All events are open invitation.

In the 12 years that she has lived in Bryan, Noel has seen the town turn into a small city. “It’s definitely grown a lot in the past five [years],” she says. “And it’s been really uplifting to see the inclusivity as far as everyone welcoming everyone with open arms. It’s come a long way; we’re very proud of what Bryan has become.”

This year, the event is focused on blending everything Texan with everything queer: barrel racing and drag shows, pole bending and Elton John, and the whole day will take place at Dripping Springs Ranch Park. The daytime celebration on June 25 is open to all, and extremely family- and kid-friendly. “That was our biggest impetus for doing this,” Searcy says. “We felt that it was important in this day and age to make sure these kids that are growing up and figuring out who they are feel like they have a safe place they can go and be who they are and be recognized.”

This year is Marfa’s first official pride celebration, and its origins are almost as queer as its founders. Over a year ago, what was meant to be a birthday celebration for Lawrence Johnson turned into an impromptu pride celebration at Cochineal, a popular restaurant downtown. Everyone was pleasantly surprised by how quick the town was to embrace pride, even in an unofficial capacity, that talks of holding an official celebration picked up soon after.

The bulk of their celebrations and events are happening this weekend. June 17 kicks off with a party at Planet Marfa, a quaint beer garden in downtown. On Saturday, Marfa Pride is putting on a family- and kid-friendly block party, complete with vendors, face painting, drag bingo, and more. It will take place on the lawn in front of the town courthouse and is a collaboration between public officials, the public of Marfa, and Pride organizers. Both nights will end at the Sentinel, a local restaurant, coffee shop, bar, and event venue. There, patrons can enjoy a drag show, live DJs, and plenty of drinks. And Sunday morning, there will be a drag brunch at El Cosmo for anyone who remains standing.

Although Marfa attracts visitors from across Texas and the world, the festival is largely aimed at bringing in locals. “The core spirit of this event is an opportunity to spotlight and uplift voices in West Texas at large, but more specifically in Marfa,” Johnson, a co-founder of Marfa Pride, says. “We are really targeting people who live in Marfa and support the town and community.” The event is being held the same weekend as the annual Agave Festival, in hopes that locals and visitors will participate in both.

Panhandle Pride’s reach is greater than just Amarillo—they’re welcoming people from Oklahoma, New Mexico, Kansas, and of course all over Texas. But it hasn’t always been so accepting. Marcus Rogers, the director of public relations for Panhandle Pride, noted that when he initially moved to the area in 2018, the community was not very welcoming. “But since then I have seen so much change and acceptance toward the queer community,” he says.

This year’s event is being held in a private space in order to avoid the prospect of protesters interfering with the celebration. It is still open to all with a $5 donation per party at the door. “It ensures that everyone is going to be safe with their expression of their true authentic selves at the Pride festival,” Rogers says. In addition to the festival, which will be held June 25, they will also host a queer movie night on June 22 where they will be screening Mama Bears. There will be additional events throughout the month, making up for the local celebration’s two year hiatus.

Although many of their events took place last week, the pride spirit in Corpus Christi still lives on. Jonathan Swindle, president of the Pride Corpus Christi board of directors, explains that not only did an incredible amount of people show up to events that already took place, but they also stepped up to help—donating time, money, and resources in any way they could.

In an attempt to take pride further, Swindle notes that “a lot of the industry here has expanded into having diversity and inclusion committees or boards that have also reached out to us to look for ways that they can support and participate.”

This was great help to Swindle, who is focused on expanding local pride celebrations to go beyond drinking and entertainment. They held a comedy night on June 10 that sold out, and people had to be turned away at the door; same story for movie night, where they screened the cult classic But I’m a Cheerleader starring Natasha Lyonne.

In addition to movie and comedy nights, Corpus Christi Pride partnered with the local university and locals from the community to host a panel on June 17 about neurodiversity in the queer community. On June 23, the 2021 Miss Gay Corpus Christi Lisa Perry will be throwing the first pitch at the Corpus Christi Hooks PRIDE game. And on June 28 at 10 a.m., they will host an LGBTQ book giveaway called Reading Opens the World in conjunction with the Corpus Christi division of the American Federation of Teachers. It will take place at the Coastal Bend Pride Center and is completely free of charge.

Looking to next year, Swindle is hoping for bigger and better. “There are so many facets of being LGBTQIA,” he says. “It’s not just going out partying. It’s also about engaging with the community in a way that shows our visibility, but also shows our vitality as a community.”

Anyone who is acquainted with the Texas heat knows that being outside for a long time in the summer is sometimes just not an option. For that reason, Wimberley is having its pride celebrations in September instead. This also gives the Pride committee a greater opportunity to work with local businesses, since it can get busy with tourists in the summertime.

Although the event takes place over the entire weekend of September 17, their main focus is on the march. “We want to focus on the social justice aspect of Pride,” says Kate Crosthwaite, co-chair for the Wimberley Pride committee. “A march fits more into what is needed in our small town; it’s a statement that’s more appropriate for where we’re headed.” It is also meant to be more inclusive, so that members of the community know exactly where and when the festivities are happening as they walk through the heart of the town.

“There are a lot of allies in this community,” Crosthwaite says. “Yet there are still opportunities for us to continue to shift people’s perceptions and assumptions about what the queer community is.”