From Anson to Galveston, beloved historic theaters have had to cancel their lineups due to COVID-19, but now they're getting creative in hopes of bringing even more good times to future generations 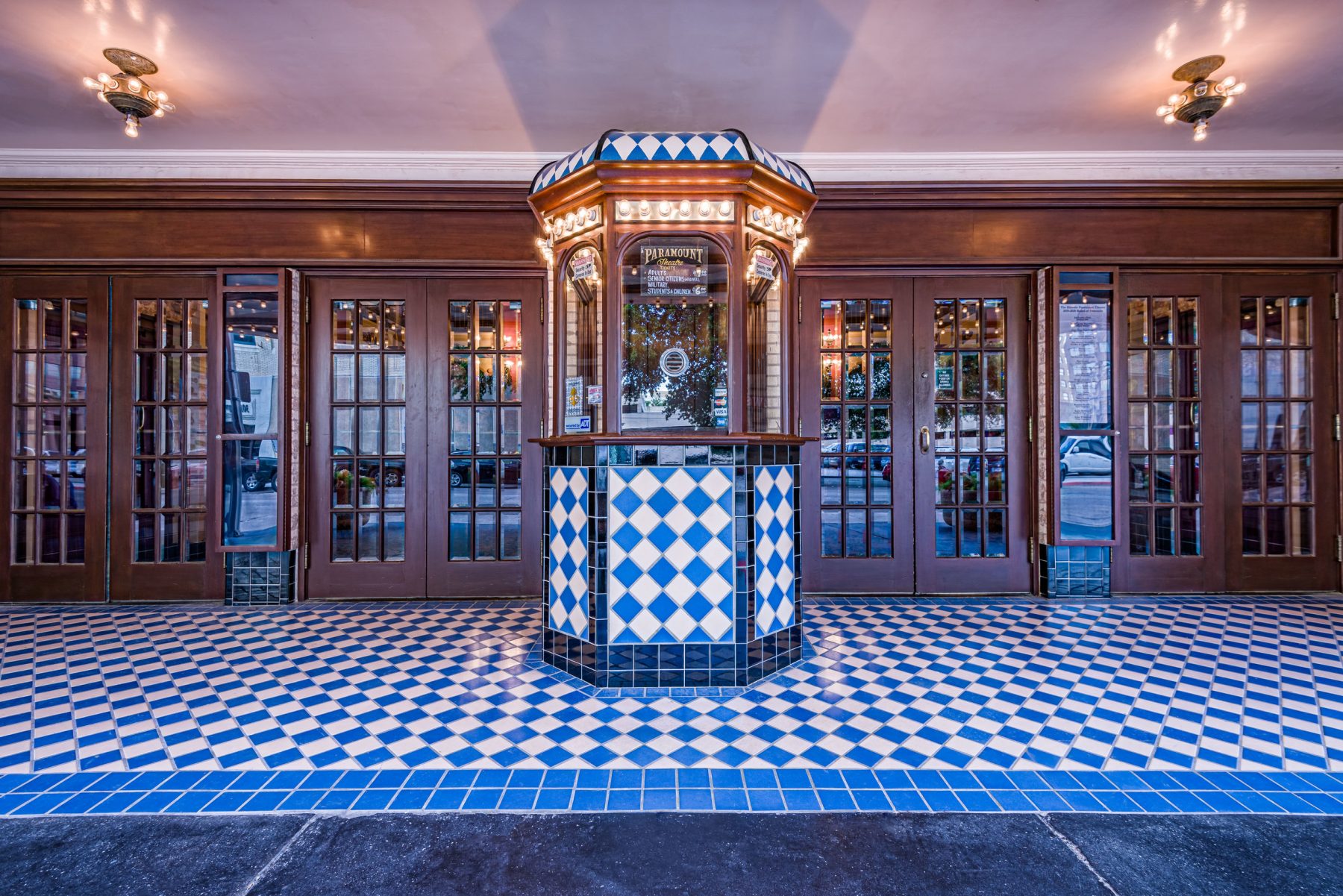 There’s a long-standing tradition in theater called the “ghost light.” This is when a single light bulb or other light source is placed on a stage and kept lit while the venue is closed, or “dark” in theatrical parlance. Depending on who you ask, the ghost light is meant to keep the spirits of past shows happy or to chase them away. Unfortunately, ghost lights in historic theaters across Texas are staying on a lot longer than usual due to the spread of COVID-19.

Since mid-March, theaters have been unable to book their usual slate of shows and special events resulting in lost ticket sales and lost revenue. Many theaters were expecting to reopen in June, and even put all of the necessary precautions in place to keep staff and guests safe. Then COVID-19 cases began to spike again in Texas, and reopening wasn’t feasible. Some theaters have postponed their reopenings until August, while others have canceled their seasons entirely.

Without revenue, covering operating costs like electricity and staff salaries has been a big challenge. Monthly expenses can range from $500 for a small, 250-seat theater to $500,000 for a 1,200-seat theater. Some theaters have found relief through a Paycheck Protection Program loan, but many are having to wait out the situation with few options.

One such theater is the Anson Opera House, which closed its doors on March 20. Built in 1907, it’s owned by the city of Anson (part of the Abilene metropolitan area) and had recently remodeled its event hall. “We got it all fixed up but couldn’t use it,” says board member Cheryl Guernsey. The opera house reopened for a small wedding on June 20 and has booked two more weddings in August. “Revenue has been from our rentals. That’s basically what we’ve had, but that’s dwindled,” she says. “We’re at a standstill.”

Although theaters can operate at 25% capacity, some historic venues that have older patrons have chosen to remain closed and launch creative money-makers instead. Abilene’s 90-year-old Paramount Theatre, which showed its last movie on March 14, devised a drive-by popcorn fundraiser. Patrons could drive up to the theater, purchase an extra-long bag of popcorn for $10, then go home and watch a movie. The first fundraiser in April was so successful, the theater held a popcorn drive-by every Friday between May 15 and June 10. “We probably sold between 1,000 to 1,500 bags,” says events manager Verity Pryor-Harden. Like other theaters, the Paramount rents out its main marquee. For $100, the theater will put up everything from a business’s name to a marriage proposal. 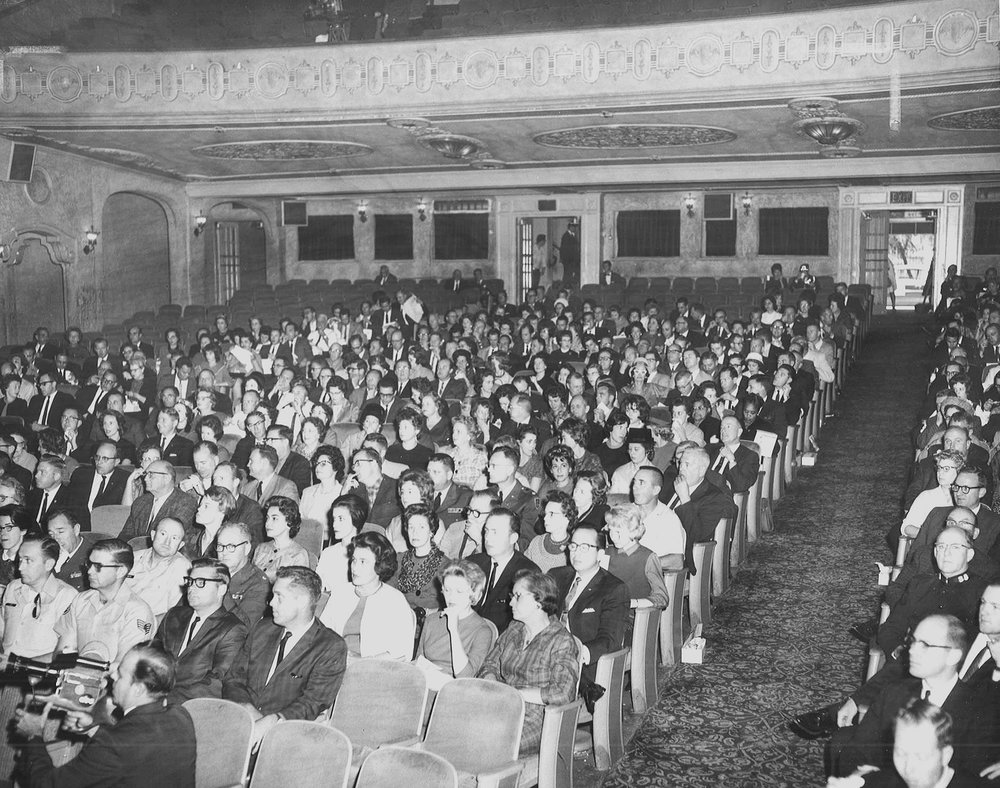 In Flatonia, the intimate 84-seat Lyric Theater is the only theater operating in Fayette County. Although it never officially closed during the pandemic, it stopped showing movies every Friday and Saturday. To help pay for operating costs, groups of 10 and fewer can rent the theater and watch a movie for around $200. Just don’t request a screening of Beach Blanket Bingo. “That’s the last film the theater showed before it closed in 1967,” says owner James Longmire, who restored the Lyric and reopened it in 2017.

For The Grand 1894 Opera House in Galveston, this year has been particularly hard. The venue was halfway through its 125th anniversary season when it had to shutter. “I had titled it ‘A Legendary Season,’ not realizing what the year would become,” says executive director Maureen Patton. Fortunately, the theater received a PPP loan and has been able to drum up sales for its commemorative history book. Written by former board president Merri Scheibe Edwards, the 152-page, picture-filled hard-bound book sells for $60.

With social distancing regulations, The Grand can seat about 200 people. To accommodate the smaller audiences, Patton hopes to present a couple one-man shows featuring pianist Rob Landes and Jaston Williams of Greater Tuna fame in early 2021. But she’s keeping a cautious outlook. “Every day is a new day. We literally don’t know what the situation will be with social distancing. That’s the $64,000 question,” she says.

While stages remain empty, some theaters have turned to community engagement. “As a nonprofit, what you have to do during this period of time is focus on both revenue and relevance,” says Jim Ritts, CEO of the Paramount and State theaters in Austin. “I think that’s very, very important for any venue, but particularly important for historic venues that have been generationally important to a city.”

As one of the main venues for South by Southwest, the Paramount lost 10 days of programming when the festival canceled with just seven days’ notice in March. In a typical year, the theater has between 280 and 300 live shows and 300 to 350 film screenings. To date, they’ve had to postpone, cancel, or reschedule 208 shows and films. “That’s about $3.2 million in gross revenue that has been delayed or not coming back,” Ritts says.

Because the theater’s big annual gala and Summer Classic Film Series have been postponed twice, the Paramount has created virtual events to raise money and stay connected with patrons. These events have included an online auction, with items ranging from a message on the marquee to a special concert with Guy Forsyth; interviews featuring author Lawrence Wright and autism spokesperson Temple Grandin; and the Quaranscreen Film Series, with film programmer Stephen Jannise offering weekly movie recommendations that people can watch at home.

Although the future is uncertain for all venues, Ritts and others point out that historic theaters have the advantage of experience over their newer counterparts. Theaters built from the late 1800s to the 1930s have survived challenging times. Austin’s 104-year-old Paramount, for instance, remained open through the Spanish flu of 1918, World War I, the Great Depression, and World War II. The 125-year-old Grand 1894 Opera House withstood all those events and the devastating hurricanes of 1900 and 2008. Historic downtown theaters have also persevered during the suburbanization of cities in the 1950s and ’60s and the economic hardships for downtowns in the ’70s and ’80s.

Making it through events like these leave downtown historic theaters “battle tested,” Ritts says. “That’s the one thing that we all have in common. You have this bond of having been through the wars, and while this is a unique time—we went from going 150 to zero in one day—the fact of the matter is that our DNA is survival.”

It’s because of this perseverance that generation after generation of locals are attached to their historic theaters. After all, these are the places where people saw their first musical or movie. “We hear stories all the time of people going on their first dates at our theater,” Pryor-Harden says. And with their old architecture and flashy marquees, historic theaters are often a main attraction for road-tripping tourists. “When you google Flatonia, seven out of 10 pictures that come up are the Lyric Theater,” Longmire says.

So, if history is anything to go by, these old theaters will manage to reopen again. They may have to adjust to a new reality, where guests have to wear masks and sit six feet apart. “But the show will go on,” Patton says. And until that day comes, she’ll keep her theater’s ghost light lit.