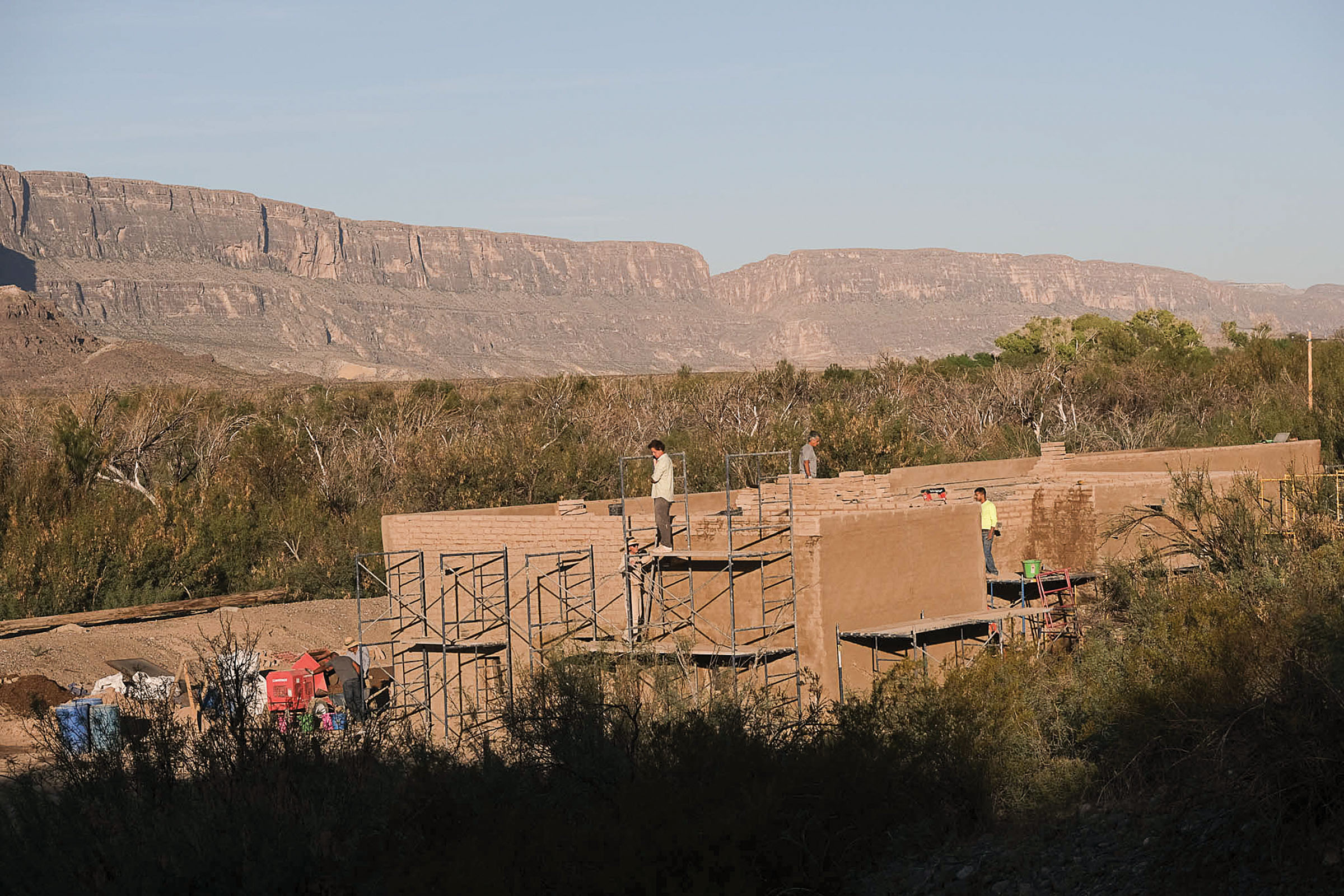 A restoration crew rehabs the 1901 Alvino House against a backdrop of Sierra Ponce in Mexico, Santa Elena Canyon on the Rio Grande, and Mesa de Anguila in Texas. Photo by Jessica Lutz.

Big Bend National Park’s craggy Chihuahuan Desert landscape may seem incongruous with the verdant and neatly organized crop rows of a farm. But if you were to visit the Rio Grande bottomlands during a stretch of the early 1900s, you would’ve found fields of vegetables, hay, and cotton lining the muddy river—a cradle of fertility in an unexpected place.

Despite the arid surroundings, Mexican families started cultivating the rich soils on the Rio Grande’s northern bank in the late 1800s. Where visitors today see fields of creosote, tamarisk, and mesquite trees, farmers raised crops for subsistence and to sell to area mining and ranching communities. Most evidence of this agricultural era was lost with the establishment of Big Bend National Park from the 1930s to ’60s. But vestiges remain, most notably the 1901 Alvino House, the oldest intact adobe structure in the 1,252-square-mile park. Recently, adobe specialists conducted a restoration of the five-room building as part of ongoing efforts to preserve this link to the region’s past.

David Keller, an archeologist with the Center for Big Bend Studies at Sul Ross State University, spearheaded the Alvino House project. It’s one of several adobe restorations and stabilizations—including the nearby Dorgan House—he’s been working on over the past five years in concert with the park. Visitors typically seek out Big Bend for solitude and natural wonder, he notes, but the park’s cultural history adds a key layer of understanding.

“It’s hard to imagine—to know people lived here and the hardships they had to endure in order to survive in the desert without air conditioning, without ice, without cool running water,” Keller says. “Nowadays we have those things, and it makes the desert more tolerable. The house contextualizes the landscape on a human scale that people identify with.”

The one-story adobe home sits on Ross Maxwell Scenic Drive, a road leading to the southwestern section of the park and sites including the Castolon Historic District, Cottonwood Campground, and Santa Elena Canyon, famous for its 1,000-foot limestone cliffs. In Castolon, exhibits including the restored adobe Magdalena House interpret life a century ago for farmers and for U.S. Cavalry troops stationed here during the Mexican Revolution. From Castolon, which sits on a mesa overlooking the Rio Grande floodplain, the road descends steeply past the Alvino House and into the fields that originally attracted settlers.

Among them was Cipriano Hernandez, an immigrant from the neighboring Mexican state of Chihuahua. He built the first room of the Alvino House in 1901 to be a store (it wouldn’t become known as Alvino House until decades later). Located about 7 miles downstream from Santa Elena Canyon, the store catered to small farming settlements such as La Coyota, Terlingua de Abajo, and El Ojito—all since lost to time.

Adobe construction was popular at the time, Keller says. “Mud is everywhere, so you have your material almost anywhere you go; and it’s a kind of building technology that people can do on their own without a lot of technical knowledge.” 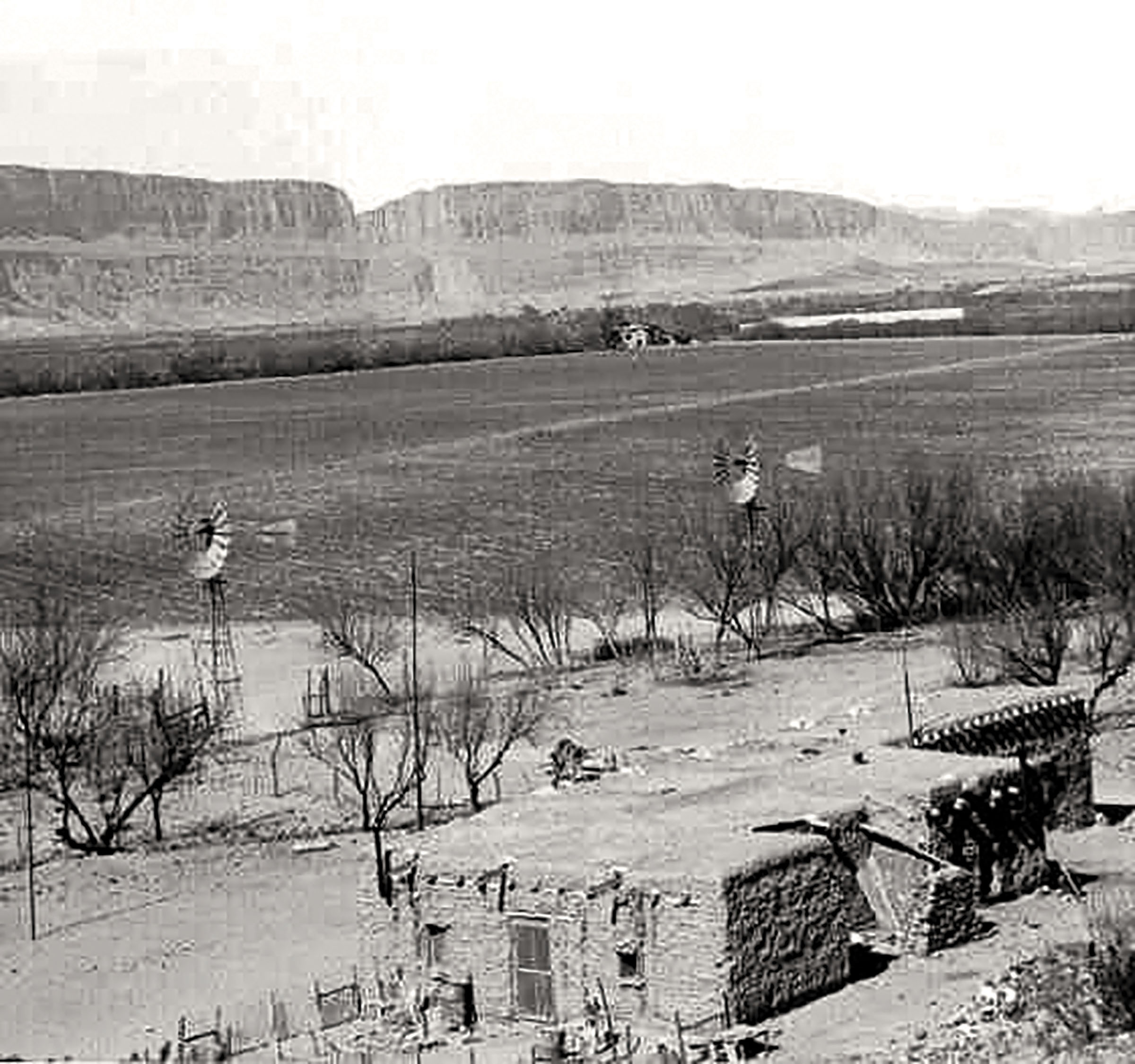 The farmers cultivated corns, beans, wheat, tomatoes, squash, and melons in the shadow of Cerro Castellan, a picturesque butte that presides over the area, working along the Rio Grande and its tributary creeks. Big Bend averages a paltry 12.5 inches of rain per year, which means the tributaries—including Terlingua, Blue, and Alamo creeks—are dry most of the time. But they flow periodically during the rainy season. “The farmers along the creeks were able to put in dams that would capture the seasonal runoff during flash floods and then channel the water into their fields,” explains Tom Alex, a retired Big Bend National Park archeologist.

Shortly after the farmers moved in, cinnabar ore—the source of mercury—was discovered among the hills. Speculators built about a dozen mines in the region in the 1890s and early 1900s. “Once the mining started up over in Terlingua, these farms began to provide those communities with food,” Alex says.

As time passed, the owner of the Chisos Mine in Terlingua, Howard Perry, and one of his employees, Wayne Cartledge, formed La Harmonia Company and bought the land where the Alvino House stands. The company grew cotton, wheat, and fruit trees, aided by the construction of a pumphouse on the river, an irrigation system, and a cotton gin. That’s all gone now, Alex says. Between scavenging of the materials and flood damage, the only remnant of the farm is a warehouse foundation near Cottonwood Campground.

Alvino Ybarra, who worked at the cotton gin and pumphouse, moved into Hernandez’s old adobe store in 1918. He and his wife, Teofila Luna, raised six children there, adding rooms as needed.

In an interview with a National Park Service volunteer in 2011, Concepcion Ybarra Gonzales, one of the Ybarra daughters, recalled that her father was always working. Concepcion, who was 84 at the time, has since passed away. She said their lives in Castolon were meager but content. “We had everything—plenty of food, clothing, friends, family,” she told the interviewer. “It did not seem hard. We had a well for our water by the house.”

Teofila died in the 1930s, but Alvino stayed in the house until 1957, four years before it became part of Big Bend. 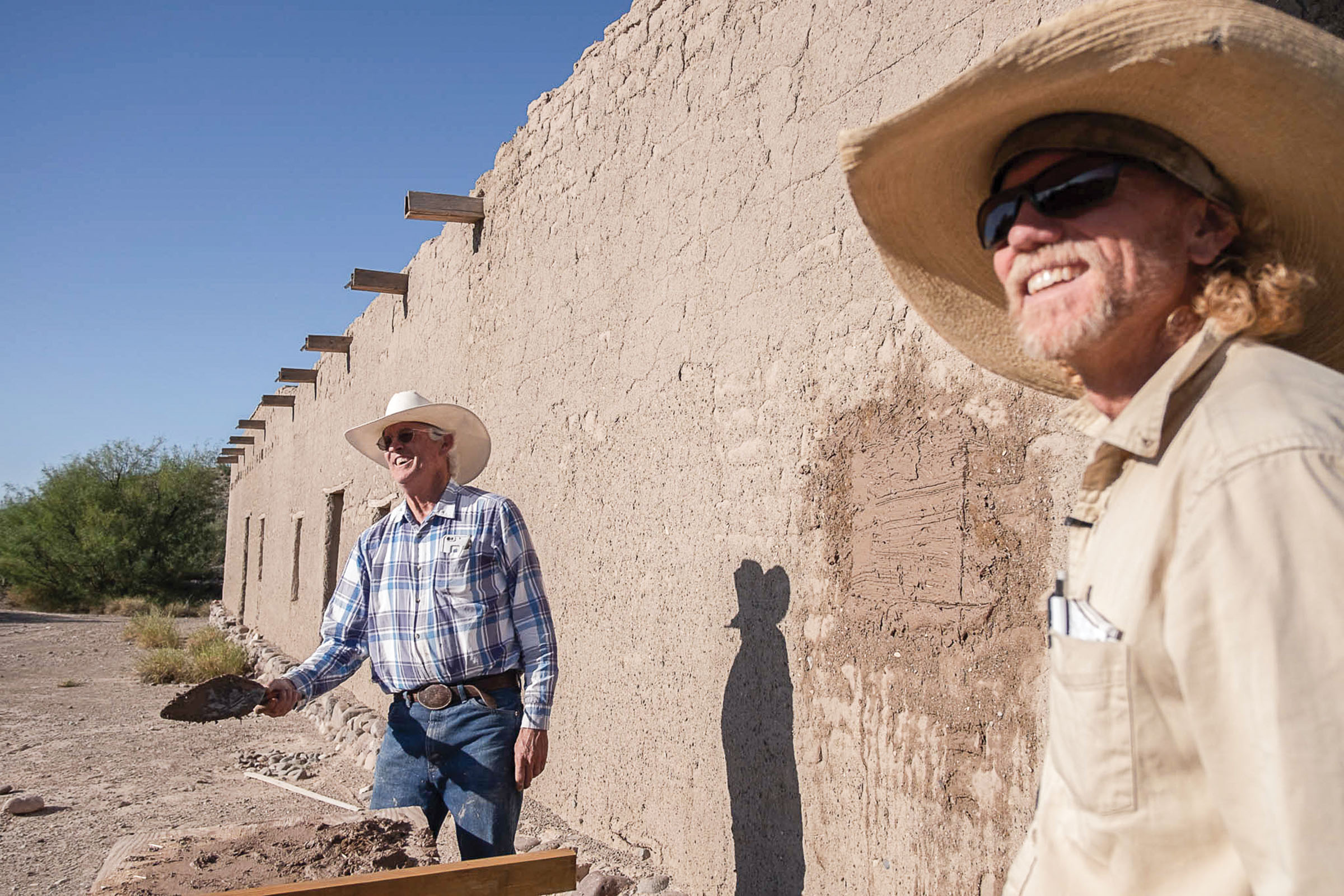 The ingenuity of adobe buildings—low-tech construction using local earthen materials—is also what makes them vulnerable. Rain, wind, flooding, sun exposure, and insects have all taken a toll on the Alvino House over the last 120 years.

Keller’s restoration is one in a long series of interventions to preserve the building and stop it from falling into ruin. For example, visitors will notice a 6-foot berm that was hastily formed around the Alvino House in 2008 to minimize damage from rising Rio Grande floodwaters.

This time around, with $150,000 in funding from the Big Bend Conservancy, a crew led by Keller and contractor Joey Benton of Silla Marfa spent seven weeks last fall repairing erosion and separation of the adobe walls, termite damage to the roof beams, and other dilapidation. To prepare for the project, Keller researched past restorations and tested different clay-rich soils from nearby sources, mixing them with various combinations of sand and horse manure to make bricks.

If you happened to pass by on the right day, you might have seen Keller spraying bricks with water jets to test which adobe mix would hold up best. Ultimately, he found the optimal clay for the adobe bricks on Blue Creek and for the wall plaster in the Rio Grande floodplain.

“When you have a premade product, a bagged product, you know exactly how it’s going to behave,” Keller says. “That’s just not the case with adobe.”

The crew made 1,450 new bricks to patch up the house. Adobe construction involves making walls from adobe bricks and mortar, and plastering the walls in adobe finish. On top of the walls, log beams known as vigas—typically cottonwood in the Big Bend area—support the roof. Builders then line latillas—skinny sticks like willow, ocotillo, or cane—across the vigas. On top of the latillas, dirt and other material are compacted into a roof. Roofs are sloped to funnel precipitation from the building via spouts known as canales.

As anybody who’s stepped into an adobe building on a hot day can attest, one of their great advantages is the thermal mass of the walls. The buildings cool off at night, and the mud bricks—18 to 20 inches thick—keep the interior cool by slowing the advance of the Chihuahuan Desert’s intense heat during the day. Visitors to Big Bend can’t enter the Alvino House, however. While the exterior now looks fresh and new, the inside remains in a state of disrepair, the windows screened to keep people and critters out.

Keller has proposed to also restore the interior, which may eventually enable visitors to step inside and get a better feel for the lives of families like the Ybarras.

“You really can’t get a sense of the true vernacular without being inside those structures to see how effective they are in the desert heat,” Keller says. “It completes the story.”

After the La Harmonia Store in the Castolon Historic District burned in a 2019 wildfire, Big Bend National Park opened a temporary new store with drinks, snacks, books, and other essentials. The historic district, on a mesa just above the Alvino House, also includes the restored Magdalena House with historical exhibits and the restored Garlick House, which will open as a new visitor center in November. nps.gov/bibe