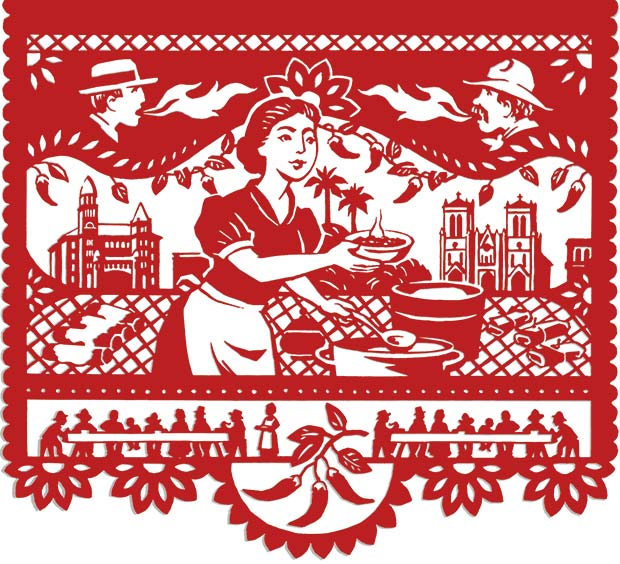 In the closing decades of the 19th Century—and especially after the arrival of the railroad in 1877—many travelers were drawn to San Antonio by the allure of the fabled young women known as Chili Queens, who served chili con carne, tamales, enchiladas, and other fiery fare at makeshift restaurants on the centuries-old city plazas.

The Robert J. and Helen C. Kleberg South Texas Heritage Center at the Witte Museum in San Antonio features a wall-size mural of vintage images of chili stands on the plazas. Check with the museum for the performance schedule of the short play La Chili Queen y El Serrano by Marisela Barrera. Call 210/357-1900.

According to most accounts, the lantern-lit tables of the chili stands appeared at dusk and served customers until dawn. The Chili Queens’ food was cooked or reheated on portable stoves. Chaperones kept watchful eyes lest patrons got too fresh.

Though the Chili Queens also operated al fresco diners on Alamo Plaza and Main Plaza, they are most often associated with Military Plaza, also known as Plaza de Armas. By day, Military Plaza bustled with an open-air market and bazaar, and come sundown, street performers and revelers created a carnival atmosphere. As bankers and lawyers dined side-by-side at the chili stands with vaqueros and gamblers, a democratic spirit of joie de vivre prevailed. By the 1880s, the Chili Queens’ fame had spread to northern cities, where, according to an 1897 San Antonio Express report, newspapers and magazines idealized them as “stunning creatures, with the rich, brown skin of the tropics and the languorous grace and bewitching black eyes of Spanish donnas.”

Celebrities of the late 19th Century like actor Roland Reed often made the scene. As local theater manager Ernest Riche reminisced in the San Antonio Daily Express some 20 years after Reed’s 1886 visit, the actor “was never so happy as when flirting or chatting” with Chili Queens who taught him local customs and how to remove the shuck from his tamales. “He ate every dish that was concocted,” Riche recalled.

After one performance, Riche continued, Reed “made a talk which had everybody in the theatre audience weeping and laughing at the same time. He told them how much he loved San Antonio and the stuff sold at the tamale stands, how he loved the chili queens and the other heroes and heroines of the Alamo and the San Pedro.”

The Chili Queens also taught the actor that blowing on his plate would do little to tame their chili. Many accounts focused on the cuisine’s fiery nature. Novelist Stephen Crane sampled the peppery eats in 1895, after the construction of city hall on Military Plaza had diverted the stands to other locations. Crane wrote that the chili con carne and other volcanic vittles tasted “exactly like pounded fire-brick from Hades.”

Journalist Alexander Sweet, who grew up on a family estate that included the springs that gave life to the San Antonio River, echoed that review in his nationally circulated newspaper Texas Siftings. “The innocent stranger who takes a mouthful of chile con carne,” Sweet wrote in 1885, “never inquires what the other ingredients are. His only thought is how to obtain the services of the fire department.”

Other reports, surveyed by Marian Martinello in her 2009 book, The Search for a Chili Queen: On the Fringes of a Rebozo, did not belabor the dish’s spicy nature, focusing more on tastiness and zest. Martinello’s new book, Chili Queen: Mi Historia, reprises her research, complete with recipes, in a fictionalized treatment for young adult readers.

Though a freewheeling spirit prevailed at the stands, the Chili Queens and their customers maintained a relative order. Venerable San Antonio journalist Charles Merritt Barnes recalled one instance in the Daily Express in 1908. A blind Tejano harpist, who “earned a precarious livelihood” playing around the city, took a seat at one of the tables. When an intoxicated young man would not stop running his fingers across the instrument’s strings, the blind musician “knocked the youth over backwards into the mud on the plaza.” Then, when the young man came at the harpist with a rock, another diner intervened. A policeman appeared, and the Chili Queen turned the troublemaker over to him. “Although she was up all night” at her stand, Barnes continued, “she appeared as the prosecuting witness against him in the Recorders Court, where, next morning, this rollicking youth was tamed by a ten dollar fine.”

Though the city periodically closed the stands for purported sanitation violations, they reemerged at Haymarket Square and other sites into the 1930s before the city finally shut them down for good.

A number of historical reenactments of Chili Queen and chili-stand culture have been staged in recent years, and today’s food-truck trend could be viewed as a descendant of the plaza chili stand. It’s also not too much of a stretch to consider the chili stand as the ancestral origin of the ubiquitous Mexican restaurant itself.